Accessibility links
Rep. Grayson's 'Die Quickly' Comment Stirs Debate Florida Democratic Rep. Alan Grayson became an overnight sensation two weeks ago when he said the Republican health care plan was "die quickly." And back in his home district Monday night, a town hall meeting on health care for his constituents drew partisans on both sides of the debate. 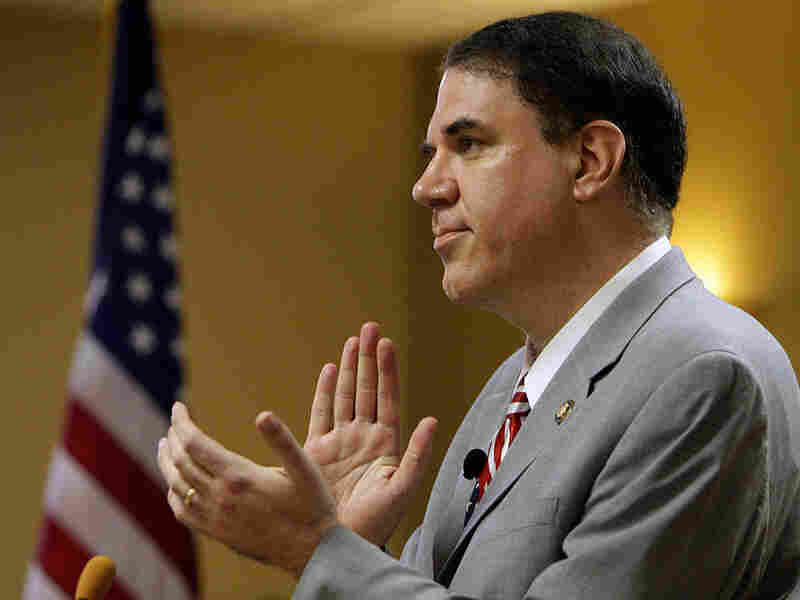 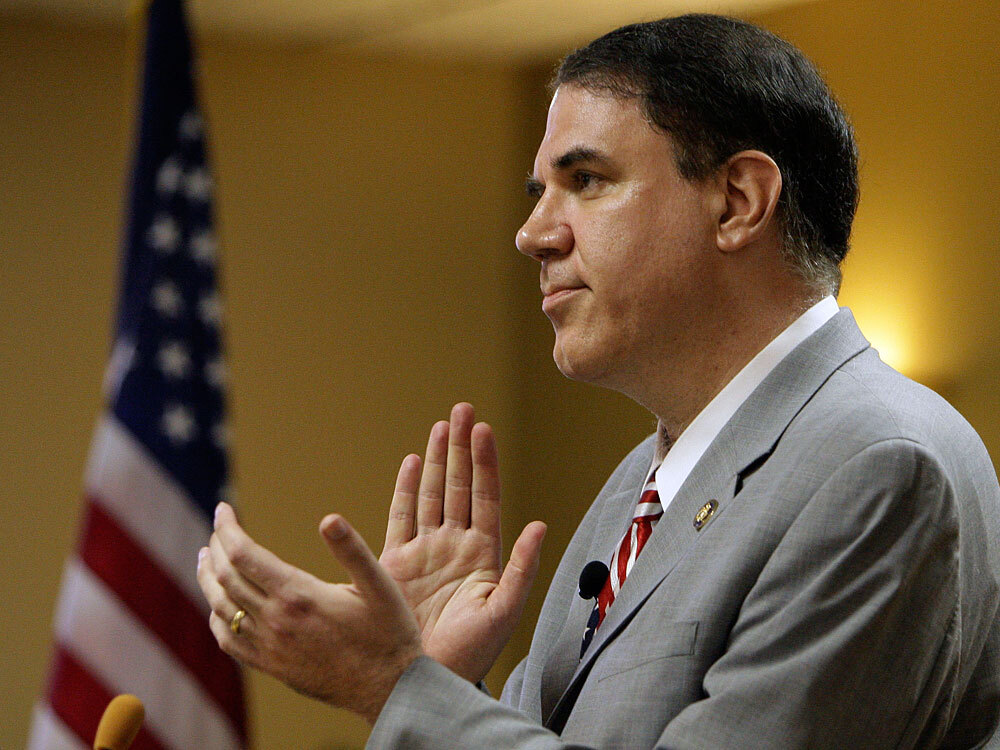 Rep. Alan Grayson (D-FL) leads a round of applause for physicians who attended a town hall meeting on health care Monday in Tavares, Fla.

Florida Democratic Rep. Alan Grayson became an overnight sensation two weeks ago when he said the Republican health care plan was "die quickly." And back in his home district Monday night, a town hall meeting on health care for his constituents drew partisans on both sides of the debate.

Tavares, Fla., a lakeside community north of Orlando that is usually quiet, was enlivened by Grayson's visit. Outside the civic center — actually just a room attached to the local library — there were a lot of signs and people for and against Grayson.

Some of the Grayson naysayers identified themselves as members of the Tea Party Patriots group, opposed to any government intervention in the health care system.

Irene Morningstar was a registered Democrat until 2008, when she switched parties. She says she voted for Grayson in November — now, much to her regret.

"He made that statement about the Republicans because he wanted the publicity," she said. "He hit all the news. And for the people that don't know what had been happening, they're going to believe him. And it's a lie."

Morningstar blames Democrats for bottling up Republican bills and rejecting amendments that she believes would overhaul health care in a more cost-conscious fashion.

As a couple of hundred Grayson opponents and supporters jostled with their signs outside the civic center, off to one side, 82-year-old Anna Smith leaned against one of the building's brick walls. She said she would have liked to sit down but forgot to bring her folding chair.

Smith said she was there because she believes it's important to have government involved in health care. She has been sick a lot lately and has had to depend on her family to help pay thousands of dollars in hospital bills — her co-pay under Medicare.

She said she thinks Grayson was telling the truth.

Inside the hall, Grayson continued the tack he's taken ever since his presentation on the House floor drew so much attention two weeks ago.

After more than 200,000 views on YouTube and countless cable news and talk show appearances, he remains unapologetic. The only apology he has made so far — and one he repeats often — is to the 44,000 Americans he says die each year from inadequate health care according to a Harvard study.

Monday's town hall was by invitation, open only to Grayson's constituents. But many people — like Rick Elwood — were skeptical both of Grayson and of Democratic plans to rewrite health care.

"It's a little bit insulting to hear you say constantly that the Republicans aren't offering anything up," he said. "They are."

This is Grayson's first term in what had been a Republican district. That has led Republicans to consider him vulnerable — someone they might be able to knock off in next year's midterm election. If that seemed possible before, it hasn't gotten any easier in the past two weeks.

Grayson is a successful trial lawyer and one of the richest members of Congress. His staff says his new notoriety has been a fundraising boon. And so far, no prominent Republicans have stepped forward to challenge him.

As for Grayson, despite his inflammatory style, he says he has no interest in partisan politics. His comments, he says, were intended to spur the debate over health care, and in that, he has been successful.

The audio and previous Web versions of this story reported that Irene Morningstar, a woman attending a rally about health care, identified herself as a lifelong Democrat. Morningstar was a registered Democrat until 2008, when she changed her party registration to Republican.