Accessibility links
Arrest For Wearing Pants Galvanizes Women In Sudan In July, Sudanese journalist Lubna Ahmed Hussein was arrested in Khartoum under the nation's decency law and was ultimately convicted of wearing trousers at a nightclub. Her arrest turned her into a women's rights activist, and fired up other women who seek to change the nation's criminal code. 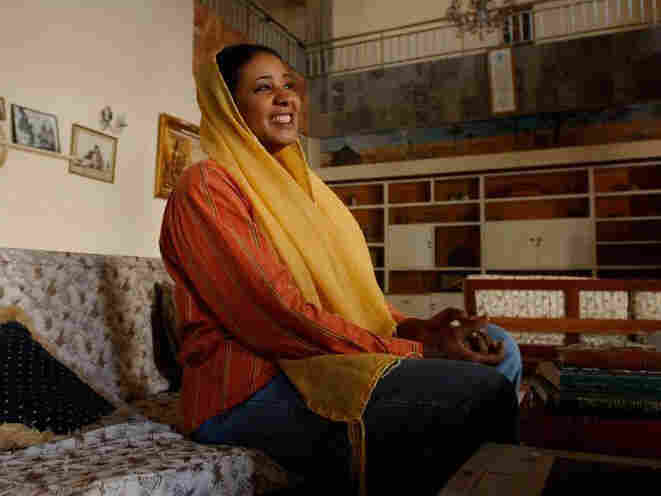 The court in Khartoum, Sudan, fined Lubna Ahmed Hussein $200 for violating the country's criminal code — by wearing pants in a nightclub in July. Hussein said she preferred to go to jail, but she was freed after one night there. She is appealing the decision, and her lawyers plan to take the appeal to Sudan's Supreme Court. Miquel Juarez for NPR hide caption 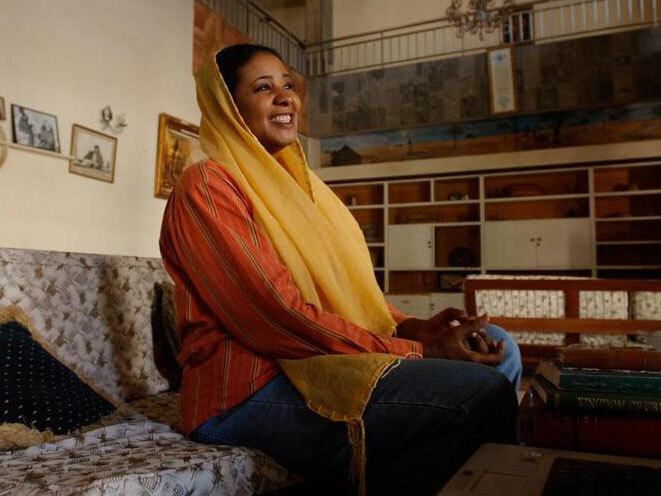 The court in Khartoum, Sudan, fined Lubna Ahmed Hussein $200 for violating the country's criminal code — by wearing pants in a nightclub in July. Hussein said she preferred to go to jail, but she was freed after one night there. She is appealing the decision, and her lawyers plan to take the appeal to Sudan's Supreme Court.

An unusual invitation circulated on e-mail in East Africa not long ago: "Lubna Ahmed Hussein invites you to attend her court [date] and flogging under Article 1-5-2 of the Criminal Code of 1991 [for] clothing causing harassment to public sentiment."

On that e-mail hangs a pair of pants that helped galvanize the women's movement in Sudan.

Under Sudan's decency law, any man can accuse any woman of dressing indecently. She could have bare wrists or a bare head, or she could be wearing trousers.

In July, police nabbed Hussein and several other trouser-wearing women at a Khartoum nightclub for violating the criminal code.

The Birth Of An Activist

Nile Avenue is one of the prettiest streets in all of Khartoum. There's a long line of royal palm trees, a red-carpeted palace, and a view of the Blue Nile before it meets the White Nile and flows to Egypt.

At sundown, people sit along a grassy bank of the river, playing cards and drinking hot black tea. But between the tea vendors and Tinky Winky Teletubby balloons for sale, there are government security agents everywhere.

And they're staring. For any woman looking to get arrested for the crime of wearing pants, Nile Avenue is the place to be.

Hussein says it happens a lot.

That's where Hussein was arrested. When Hussein said the decency law was unconstitutional, the officer wasn't interested.

Hussein hired a team of lawyers. She quit her job at the United Nations to press the case. She connected with women's groups. And she became an activist.

"I was very angry, and I was thinking that I would do the media campaign in a way that the government sponsoring these laws never rest again," Hussein says.

'This Is Our Society'

Women wear trousers in Khartoum all the time. But every year, tens of thousands of them are detained under Article 1-5-2 of the nation's criminal code, which has more weight than the constitution. The article penalizes "an act contrary to public morals," "an obscene outfit," and anything "causing annoyance to public feelings."

Scholar Abdul Rahim Ali Ibrahim cites the Quran and Shariah, or Islamic law. "It can be translated as, 'The responsibility of society and government to look after Islamic values by encouraging what's good and preventing what is evil or bad,' " he says.

By taking her case to court, Hussein faced the maximum penalty of 40 lashes and the loss of her reputation.

"For any girl to be taken to court because she has infringed the law of decency is not something that a Sudanese girl would like to do," Ibrahim says. "I think it's very embarrassing. This is our society."

Imams preached against Hussein at the mosques. Fundamentalists called her and her supporters prostitutes and homosexuals. She got death threats. So why did she continue?

An Arrest That Could Have Been Avoided

Hussein's photo collection may offer some explanation. Her house is massive, by local standards, situated a mile from the palace where Sudan's president goes to work every day. And Hussein's living room wall of fame includes shots of a lot of tough guys: King Abdullah of Saudi Arabia, former Prime Minister Jawaharlal Nehru of India, and — in a nice sepia tone — former Chairman Mao Zedong of China.

Hussein's late husband is in the pictures, too. He founded Al Sahafa, a well-known daily newspaper. Had the police known Hussein's background, they might not have arrested her.

Mustafa Abu Al-Azim likens her case to that of African-American scholar Henry Louis Gates in Cambridge, Mass., in July. Azim edits Akhir Lahza, a pro-government newspaper. He says both arrests got people talking about much bigger issues. And both arrests could have been avoided.

"I suspect at the moment of the arrest, Lubna got into a clash with the officers," Azim says, and the police reacted.

At trial, the arresting officers gave conflicting statements. The judge never allowed Hussein's lawyers to present their case. And the judge ruled in favor of the police. But he spared Hussein the lash. She is appealing the decision.

An Effort To Change The Criminal Code

Women's rights activists demonstrated for Hussein at all of her court dates. And the police beat some of them severely.

On a recent day, a group of women's rights activists gather in a crumbling office far from the city center. Many of these women champion desperate causes, such as poor women on the street who sell hot tea without licenses. Police often scald those women with their own boiling water.

"In 2001, me and my husband — we were in our car, laughing with each other," she says. "They stopped us, and they just wanted to harass us. He said that, 'This is not your wife because it is unlikely to be a wife and husband, so intimate and laughing,' and so on."

Now, the couple travels with a marriage certificate. Women's groups are petitioning parliament to change the criminal code. But most lawmakers appear unwilling to do so.

Yet Samia Rabih, 27, is confident that Article 1-5-2 will die in her lifetime.

Rabih, a psychology student in Khartoum, says she wears trousers and miniskirts all the time. Her mother complains about it.

"When she yells at me, I kiss her on both cheeks," Rabih says.

The way Rabih sees it, mothers and daughters have been fighting over what to wear since the beginning of time. And that's the natural order of things — because mothers are the original fashion police.