Accessibility links
Cooking With Beer A staple in many cultures since ancient Egyptian times, beer can be a fixture in your kitchen, too. Pour a bit of brew into a pot, pie or cake — then drink the rest. 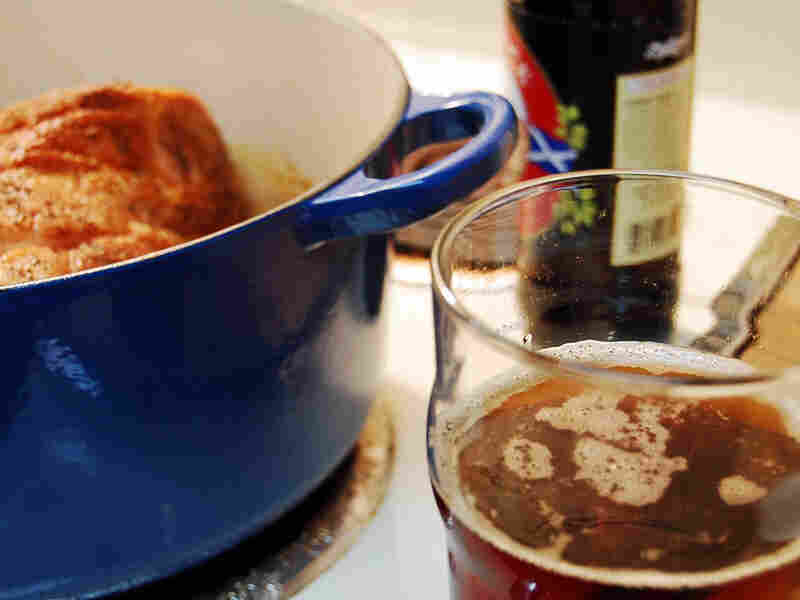 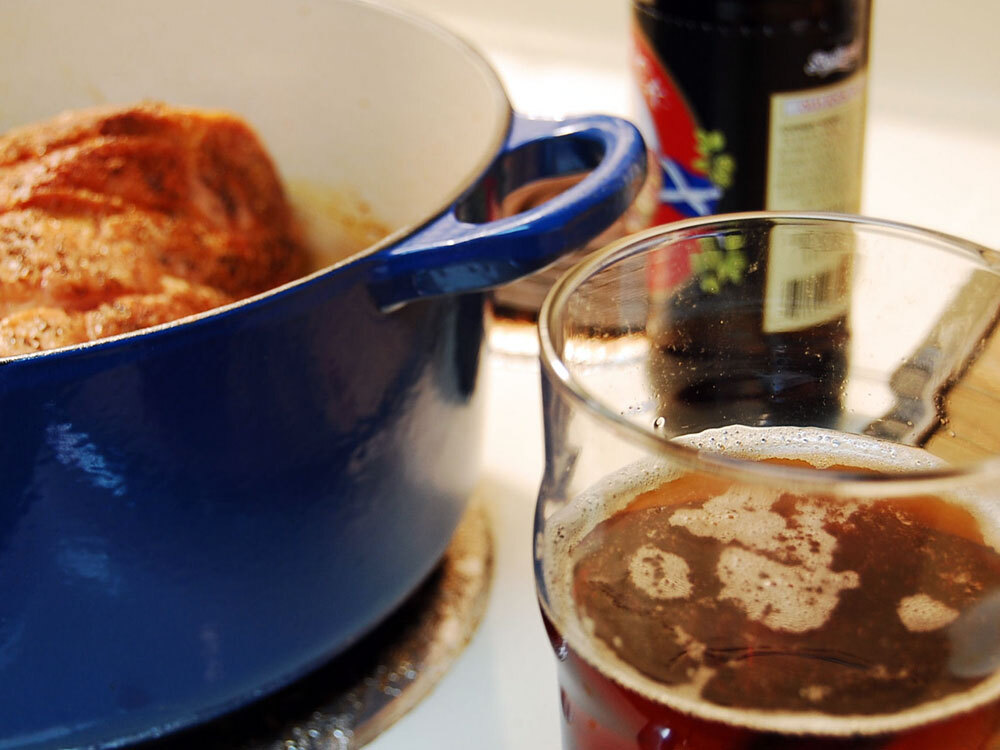 The mouth of a perfectly contented man is filled with beer, according to an ancient Egyptian hieroglyphic inscription. Many of us would agree that after a hard set of tennis or an afternoon cutting firewood, there is little more satisfying than a cold, bubbly pint. Doubly agreeable is lifting a mug while eating food cooked with beer.

I don't recall when I first cooked with beer, but I do recall what I cooked: Welsh rabbit. For years this was the only thing I cooked using beer, but eventually I began to experiment with other dishes. I figured, I regularly cook with wine, so why not beer? I started adding it to chili, including beer in my barbecue sauce and braising corned beef brisket in it.

After working as editor of various computer magazines, Kevin Weeks is now a personal chef in Knoxville, Tenn. Weeks also teaches cooking classes, is the Guide to Cooking for Two at About.com, and blogs at Seriously Good.

Although Germans do sometimes cook with beer (biersuppe — beer soup — is a famous example), Irish and Belgian cuisines are more famous for using beer as an ingredient.

Beer itself is easy to make:

Boil a mixture of grain, water and perhaps hops.

Pour a bit of brew in a pot, pie or cake. Drink the rest of it.

Filter out the grain and add (or capture) yeast.

Store it until it quits bubbling.

That's basically it. Like with bread, you are creating a microfarm for the yeast, and the yeast does all the work. You just do the heavy lifting (5 gallons of beer weighs nearly 42 pounds).

Beer brings three things to food. The hops add bitterness, which is offset with the sweetness of the malted grain and complemented by the flavor of the yeast. Dark beers also provide a distinct roasted flavor.

The effervescence in beer makes it an excellent addition to batters used for frying, producing a lighter crust. And some of the lightest biscuits I've ever eaten were made using beer. Because of the hops, reducing beer too much can result in an unpleasantly bitter dish. So if you're using beer in a slow-cooking braise, use a milder beer and dilute it with stock or water if necessary. Pale ales and nut brown ales are a good choice, but in general, avoid India pale ales, as they tend to have a high hops content.

Because of the bitterness, beer pairs well with sweet vegetables such as carrots, corn and caramelized onions. And just as wine is often found in marinades, beer, too, is a great choice. I think it's a particularly good addition to marinades for game such as venison. And as the recipe for Guinness Stout Cake shows, beer even has a place in desserts.

So pour a bit of brew in a pot, pie or cake. Drink the rest of it. Think about your ancestors and the long heritage of those wee, little beasties who eat sugar and starch, and produce wonderful flavors. Thank heaven for yeast.

This savory stew suffers from a serious identity crisis. It's a Belgian dish, but carbonade is a Spanish word, not Flemish or French. To further complicate matters, carbonade means "grilled," but this is braised, meaning it's cooked in liquid over low heat. Despite the language issues, carbonade is one of the best beer-based recipes around. The Belgians know beer. If you can find it, use a good Belgian lambic beer. I like to lightly smash the potatoes when serving it, so they'll soak up the rich gravy. 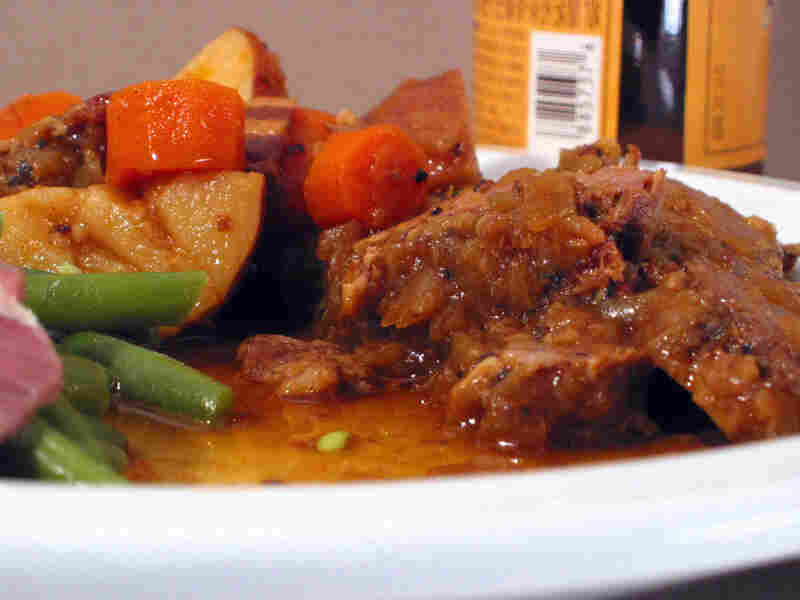 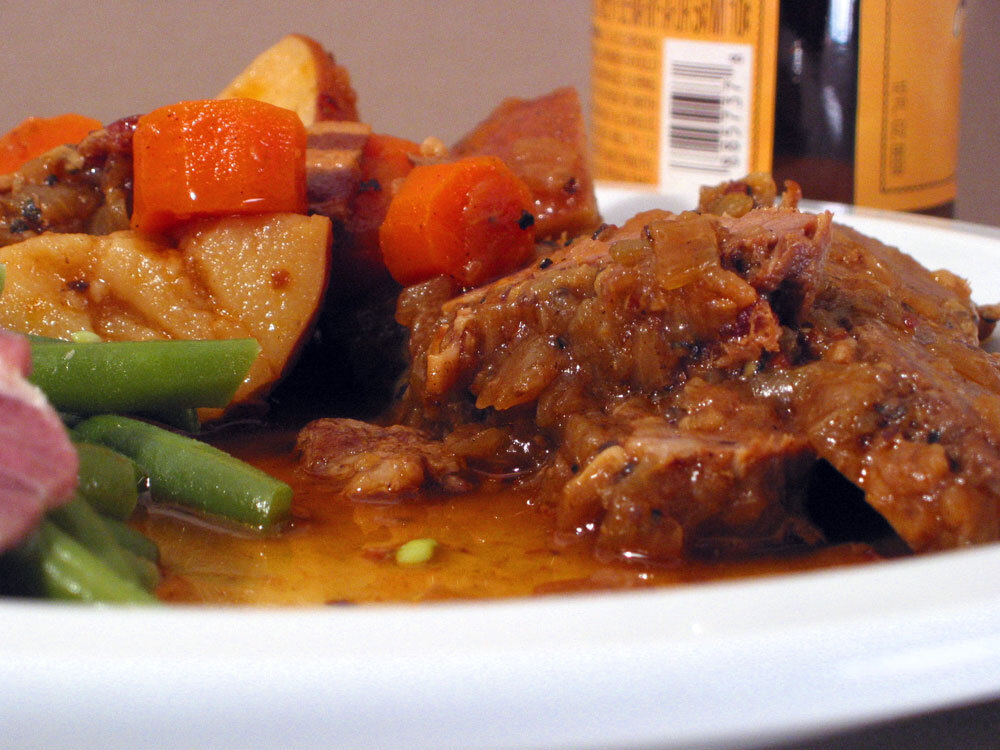 3 to 4 carrots, peeled and cut into -inch lengths

Liberally season brisket with salt and pepper. Cook bacon in a Dutch oven until crisp. Drain on a paper towel, dice and reserve.

Brown brisket on all sides in bacon fat, then reserve on a plate.

Return brisket to pot along with beef stock, juniper berries, bay leaf, bacon and tomato paste. Cover and place in middle of oven. Cook 1 hour, then turn over brisket. Cook, covered, for another hour. Turn over brisket again, add carrots, potatoes and a bit of water if needed, so that vegetables are submerged. Cook 1 hour longer. Turn one last time and cook until potatoes are tender, 30 minutes to 1 hour.

A few years back, I had a dinner party and was serving the famous Alsatian pork and sausage dish choucroute. I'd planned on making rye bread to soak up that luscious broth but ran out of time. So I decided instead to make a quick bread using beer and, because I had some, fresh dill. Frankly, I think it ended up even better for sopping (and as a complement to the pork and sauerkraut) than the rye bread would have been. I like using a porter in this bread. 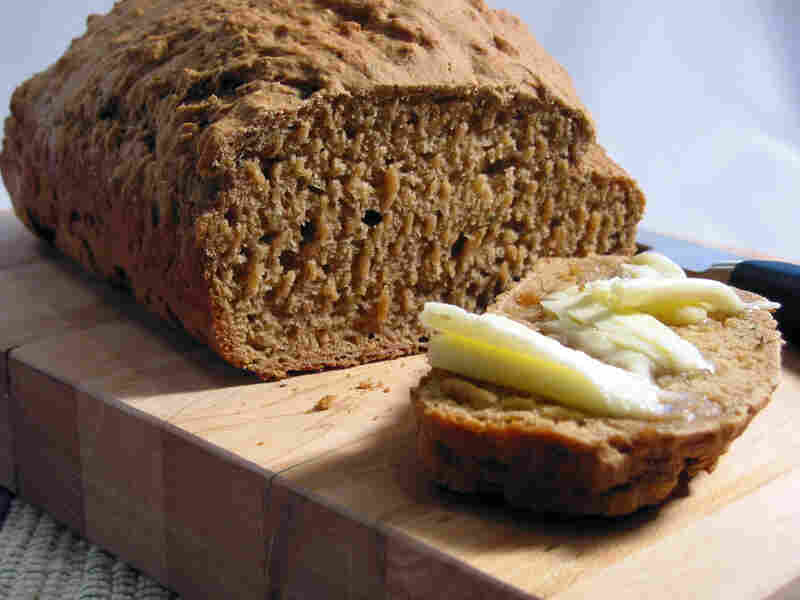 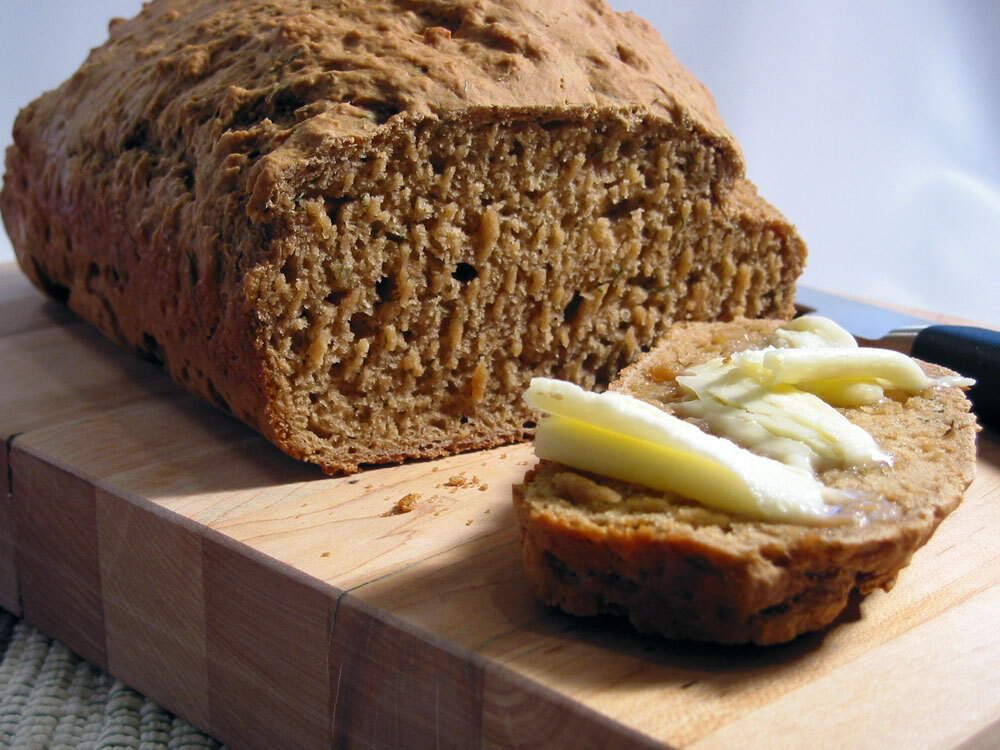 Mix all the ingredients together and spoon into pan. Cook for 50 to 60 minutes, or until a toothpick inserted in the center comes out dry.

Spanish cuisine is known for loads of garlic and almonds, lemons and garlic, sherry and wine. But Spaniards do drink beer and occasionally cook with it. I mentioned to a Spanish friend that I'd made patatas bravas (literally "brave potatoes"), and he told me his wife added beer along with the vinegar. He said she used a dark Spanish beer I'd never heard of. In the past I've used a dark ale, but a recent recommendation on America's Test Kitchen led me to try O'Doul's amber. It was perfect. 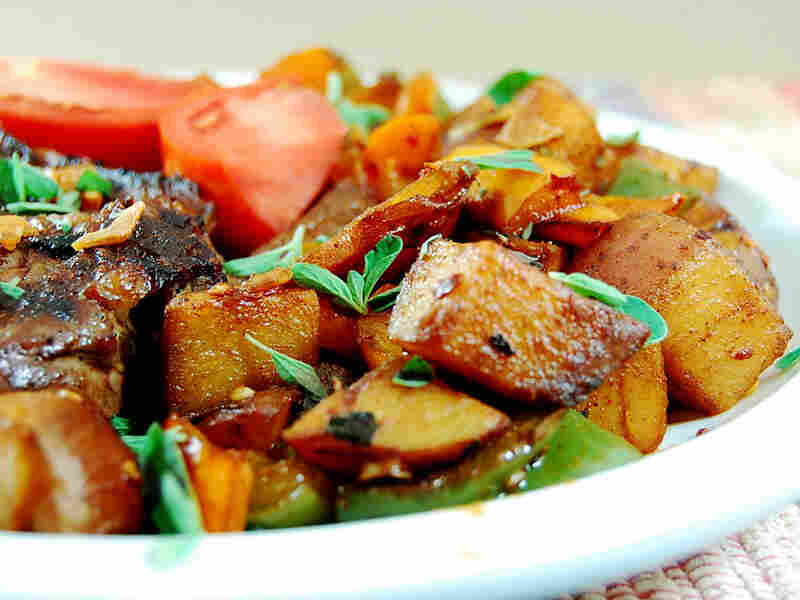 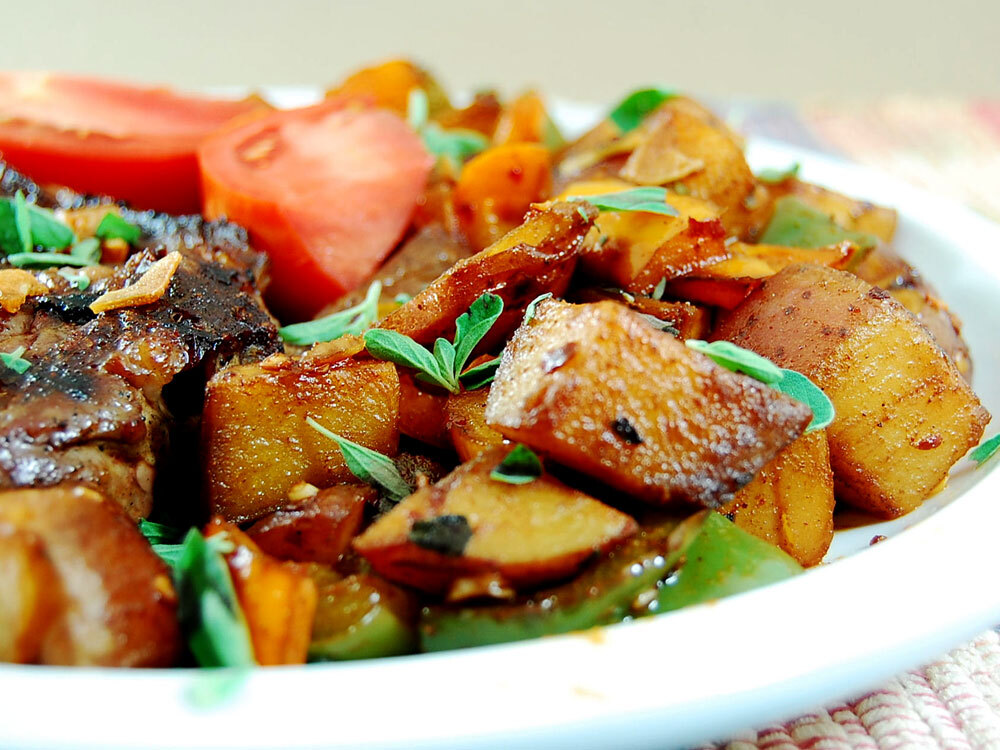 Boil potatoes until tender, about 10 minutes. Drain and quarter.Thoroughly mix together red pepper, cumin and Spanish paprika, and sprinkle over potatoes.

I've been hearing and reading about Guinness chocolate cake for years. Beer and chocolate may strike you as an odd combination, but this isn't just any beer, it's Guinness stout, a thick beverage made from roasted barley that adds a smoky note that just happens to complement chocolate perfectly. There are lots of very similar recipes for this deservedly popular cake. I adapted one published by King Arthur Flour, but substituted Nigella Lawson's cream cheese icing, which I got from her Web site. 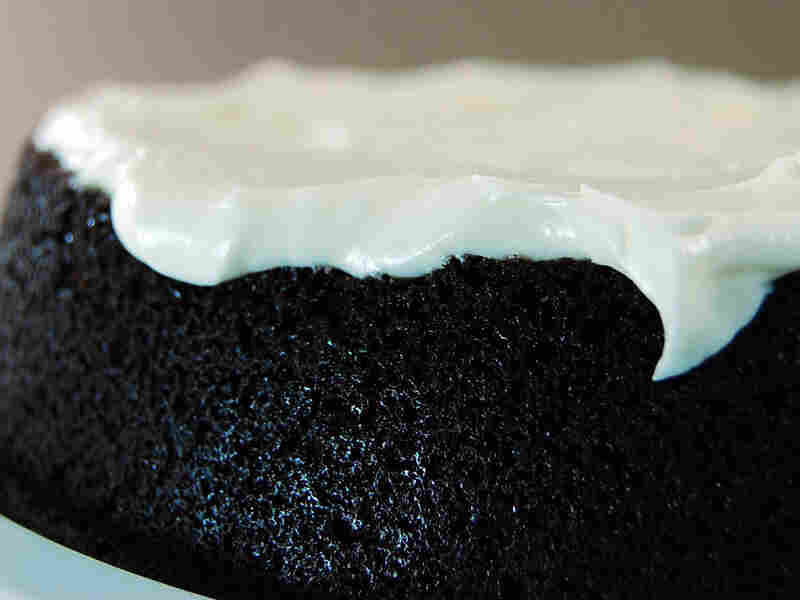 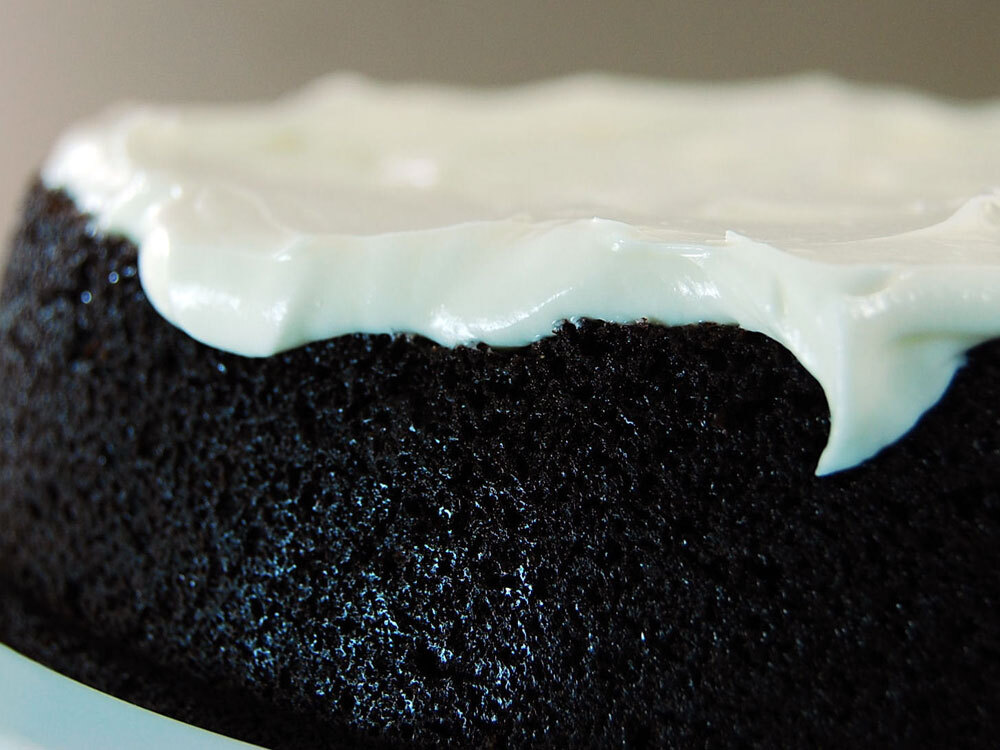 1 cup Guinness (or other stout)

Heat oven to 350 degrees. Butter a 9-inch springform pan, place a round of parchment paper on the bottom and butter it, then flour the pan.

Place the stout and butter in a medium saucepan over medium heat and bring to a simmer. Whisk in cocoa powder until mixture is smooth.

Thoroughly combine flour, sugar, baking soda and salt in large bowl. In another bowl, beat together the eggs and sour cream until well-blended. Add stout-chocolate mixture to egg mixture and beat just to combine. Add flour mixture and beat briefly on slow speed.

Finish mixing by folding batter with a spatula until completely combined. Pour batter in the springform pan and bake cake until a toothpick inserted into center of cakes comes out clean, about 40 minutes. Place cake on a rack and cool for 10 minutes, then remove the sides of the pan and cool completely.

Beat together the cream cheese and sugar. Add cream and vanilla and mix. Spread icing on top of cake to echo the appearance of a glass of Guinness and its head of foam.

*Dutch-process cocoa is acid neutral. If you use something like Hershey's cocoa (which is acid) the cake may not rise properly.