Accessibility links
In Israel, Kibbutz Life Undergoes Reinvention For years, the kibbutz movement in Israel has been struggling. Now, fewer than 5 percent of Israelis live in the communal settlements. But from the ashes, some Israelis are trying to take the old movement in a new direction. 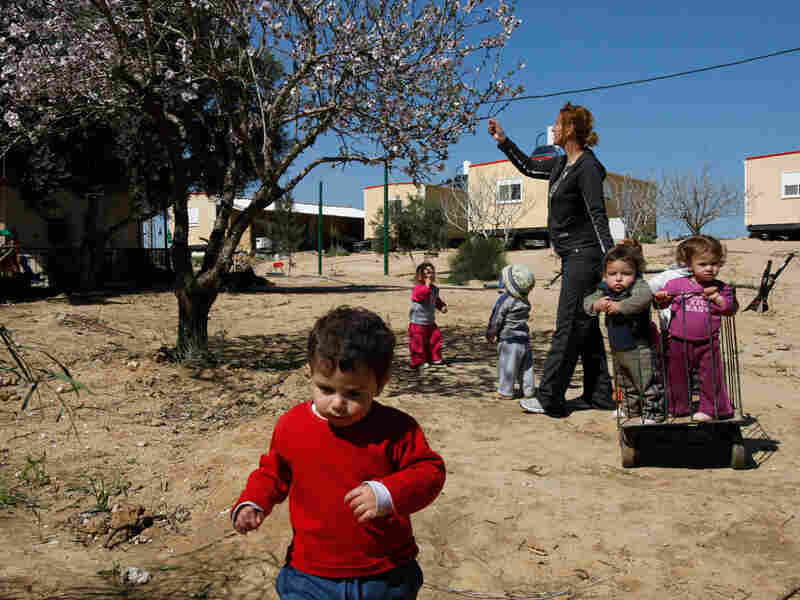 Israeli children walk through Kibbutz Kramim in the Negev desert in 2008. The traditional communal farm has struggled in recent years with less than 5 percent of the population living in kibbutzim. Gil Cohen Magen/Reuters hide caption 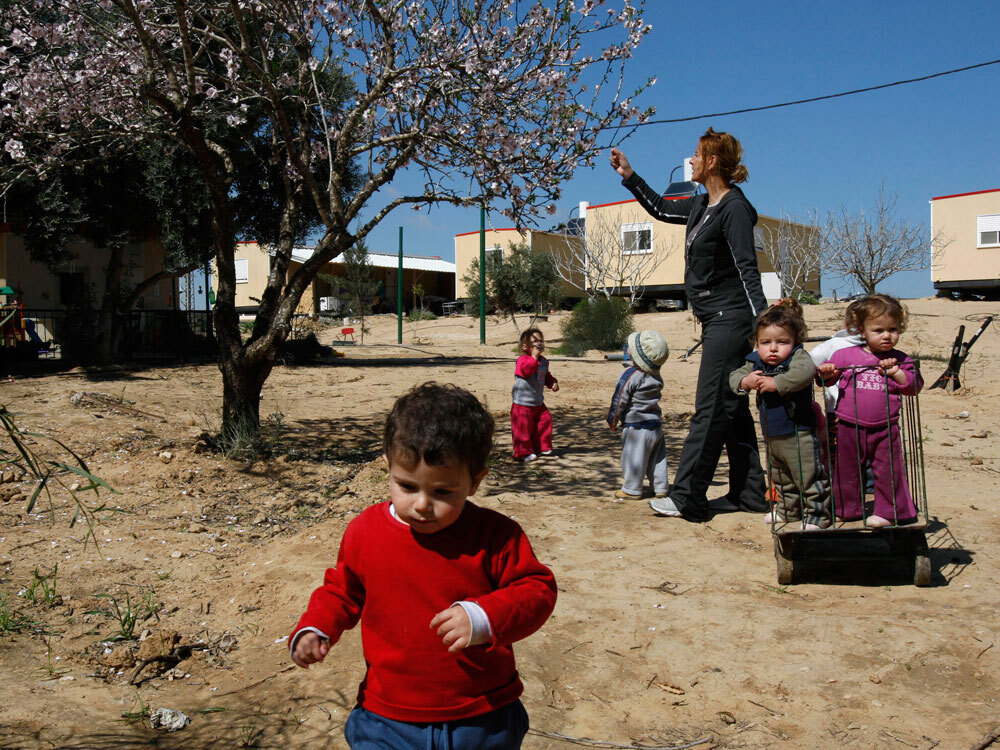 Israeli children walk through Kibbutz Kramim in the Negev desert in 2008. The traditional communal farm has struggled in recent years with less than 5 percent of the population living in kibbutzim.

For years now, the kibbutz movement in Israel has been struggling. These communal farms were a big part of the utopian dream that married Zionism with socialism. But now, fewer than 5 percent of Israelis live in kibbutzim.

Many communities were privatized; others were abandoned. But from the ashes, some Israelis are trying to branch out and take the old movement in a new direction.

It's dinnertime at an apartment in Jerusalem's Kiryat Yovel neighborhood. The door is unlocked and 20-something men and women walk in holding dishes of food for the potluck meal. It looks like a gathering of any group of young Israelis, but the people here are members of an urban kibbutz.

She grew up on a traditional kibbutz — one that was set in a remote rural environment, where all the funds and the work were shared. 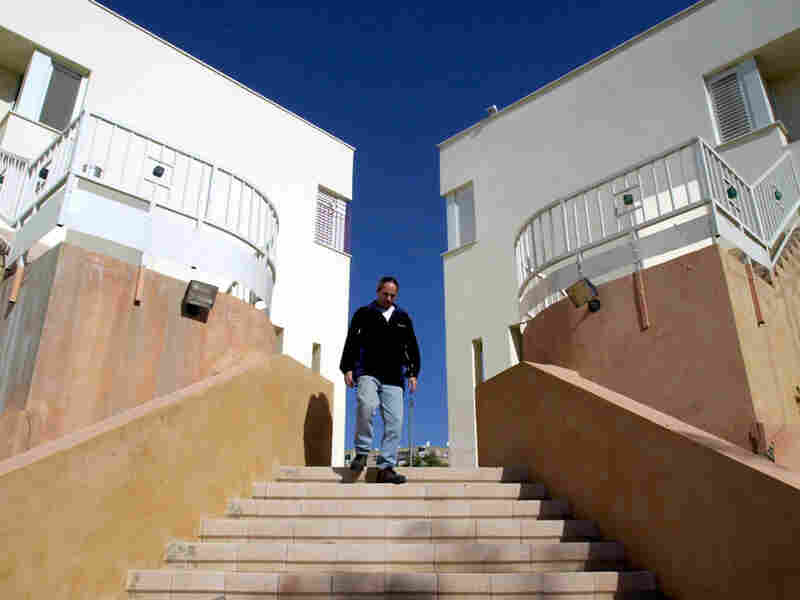 Bryan Meadan walks down the stairs of the urban Kibbutz Tamuz in Beit Shemesh, outside Jerusalem, one of dozens of urban kibbutzim in the country. Pier Paolo Cito/AP hide caption 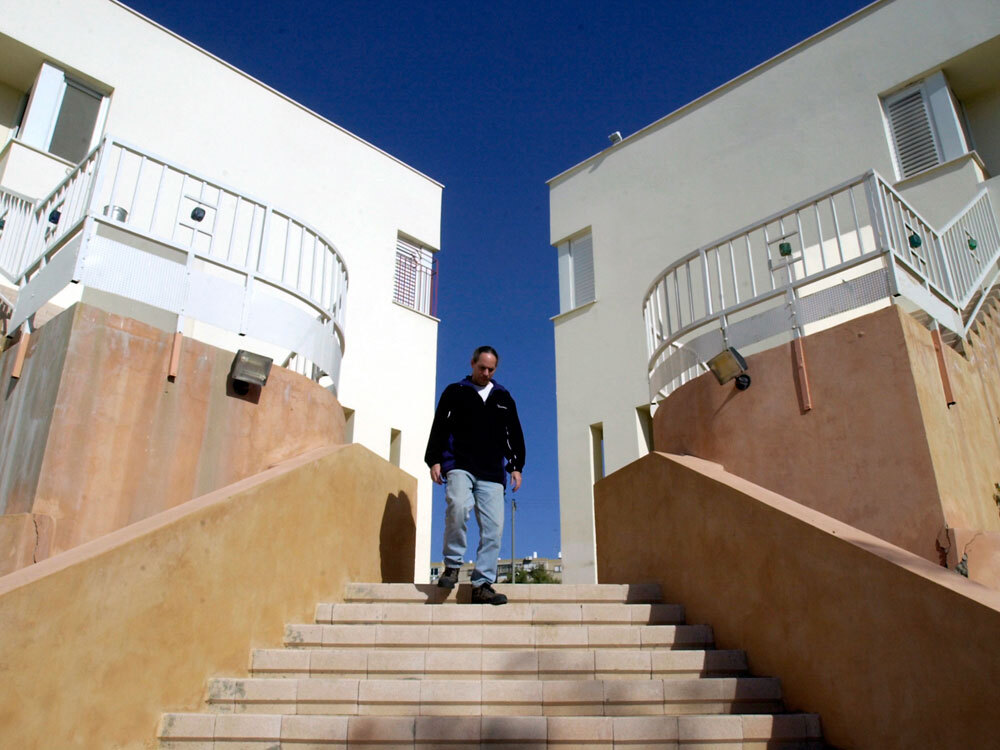 Bryan Meadan walks down the stairs of the urban Kibbutz Tamuz in Beit Shemesh, outside Jerusalem, one of dozens of urban kibbutzim in the country.

"What we felt [was] that in modern society today there is a lot of alienation between people in the cities, where most of the population today lives," Gomel says. "So this is why we felt we want to live in a more urban setting but with the solidarity and the friendship and the personal ties of a small kibbutz."

Her urban kibbutz — one of dozens in the country — is made up of 13 adults and three children. Most of them live in this apartment building.

"We want to share a space, that's for sure. We don't share the same apartment. We're not in a commune setting," Gomel says. "We have some kind of economic sharing. We celebrate holidays together. We also have a lot of ideological sharing, which means we learn a lot from each other."

And they want to achieve certain common goals. This group is active in local politics. At the moment, they are leading the charge in trying to maintain the secular character of their neighborhood as increasing numbers of Orthodox Jews move in.

Communal meals are an important feature of their life, when they can discuss and plan activities. As dusk falls, they sit down to eat.

The Kibbutz In Progress

There are 256 kibbutzim in Israel, according to the movement's official Web site. But for the past decade, the movement has been in crisis.

"We are in a situation of restarting the whole thing," says Muki Tzur, a historian and former secretary-general of the United Kibbutz Movement. Sitting in a park in Tel Aviv, he says he is hopeful that the movement can survive this difficult time.

It's a pregnant movement. There are many directions, many adaptations; there are many new ideas that are coming through.

But what exactly? Sometimes even those who are starting a new kibbutz don't know.

In the kibbutz of Hanaton in northern Israel, Jacob Ner-David fields a question about what the new model for this kibbutz will be.

"The 25 or 30 new houses that you want to build for future members, what will it mean to those families to be a kibbutz member?" the questioner asks.

"It's still going through definition," Ner-David answers. "There isn't an absolute answer to you."

Ner-David moved here a few months ago from Jerusalem with his wife and six children, along with 18 other families.

People in the area are busy at work remodeling homes they will eventually be living in. Hanaton, Ner-David says, was founded in the 1980s, but by 2006, only 11 of the original 114 members were left. Like many kibbutzim, its finances faltered and it was deeply in debt.

Ner-David and the other families bought the kibbutz and are now working out how the community will function. Everyone will own his own home. Most have jobs off the kibbutz, so their income will be their own as well.

Beyond that, Hanaton is affiliated with the Conservative Jewish movement, and Ner-David says that the families who come here all want to explore their faith.

"Your Jewish identity has to mean something, and it has to be the basis for how you view communal life," he says. "Because it is a bunch of people that want to figure out what does it all mean."

He says Hanaton will be a place where some interfaith challenges can be resolved.

"Hopefully, it will be an example of what could be, how do you all get along. I mean, if we have one synagogue, for example, what do you do? I'm sure there's going to be a breakaway synagogue," he says, laughing.

It hasn't been easy, but Ner-David says he doesn't regret coming here. "The reaction we've got from most people that we speak to, for example, in Jerusalem, Tel Aviv, my business partner — who's an absolute Tel Avivian — is 'Wow, you are actually doing what everybody else dreams about.' "

About an hour away is a different community that is trying to completely redefine what a kibbutz is.

"Kishorit is a home for life for adults with special needs located in the Galilee and has 140 members. The vision of the founders was based on the kibbutz model," says Dita Kohl-Roman, one of the directors.

Yochanan Bayit, a resident with special needs, came to Kishorit five years ago and works in the community's television station.

"I came here to change my life. I have interesting things to do," he says.

Kohl-Roman says the kibbutz members here all have different backgrounds — some are autistic, some are schizophrenic, all have some form of disability. Eventually, there will be a community for family members abutting Kishorit. A sister area for Arab members with special needs is also planned.

"The kibbutz has an enormous ability to heal. The community life in the kibbutz, the fact that one celebrates the holidays together, actually is very good for people with special needs," Kohl-Roman says.

Having a place where no one judges you, where there is a safety network, she says, is vital. "You have people who are taking care of you here, and you have friends here. You can help others who are weaker than you and you can get help of other members who are stronger than you," she says.

As in a traditional kibbutz, everyone is expected to work. There are a toy factory, a goat farm and a kennel. Kohl-Roman says there is nothing like Kishorit anywhere in the world.

She says she is excited by what's happening here. Far from the kibbutz movement being dead and buried, she says, it is being reborn.