Accessibility links
Prairie Pioneer Seeks To Reinvent The Way We Farm A man from the Plains is on a mission to change the way we farm. For the past 33 years, this farmer has devoted his life to creating new strains of crops that will thrive year-round without depleting the soil. 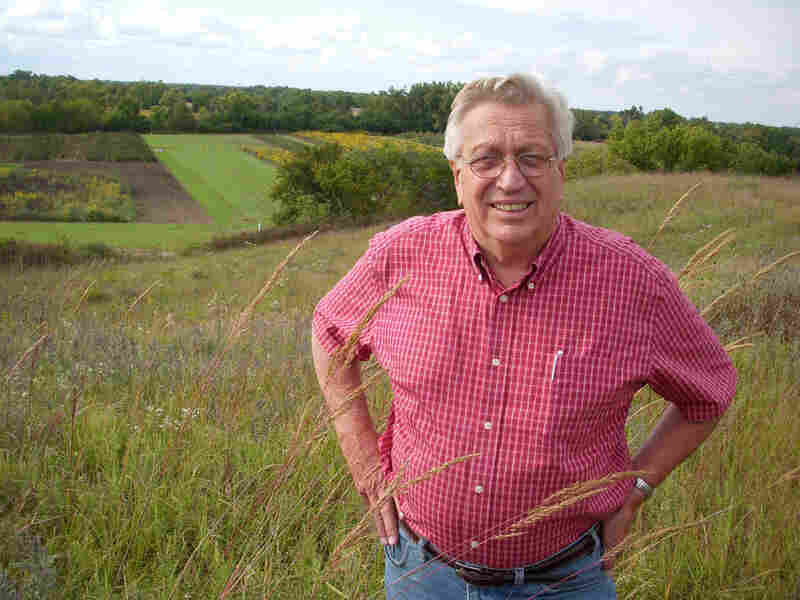 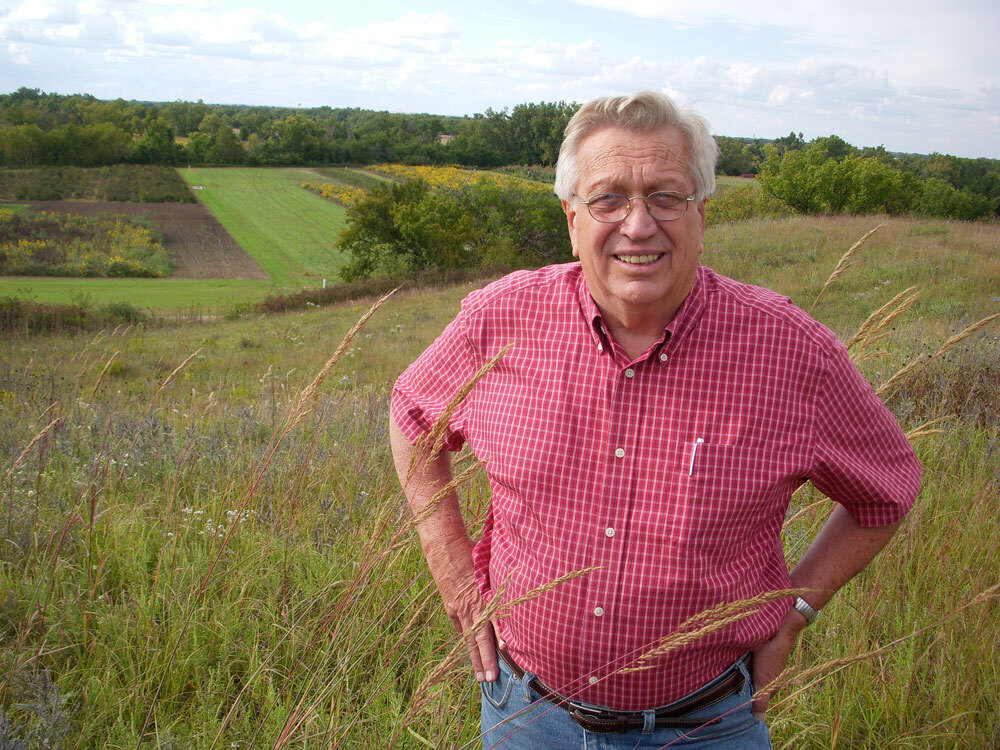 Wes Jackson, founder of the Land Institute, at his farm in Salina, Kan.

We tend to think Earth can provide us with an endless bounty of food. But farming practices in most parts of the world can't work forever. Soil is constantly washing away, and what's left is gradually losing the nutrients it needs to sustain our crops.

In the prairies of Kansas lives Wes Jackson, a man who has spent his long and rich career trying to invent a new kind of agriculture — one that will last indefinitely.

Jackson seems like a good-ol'-boy farmer from the Plains. His hands are broad and strong, a plaid shirt covers his beefy belly, and he sounds every bit like the native son of Kansas that he is.

On this autumn day, the 73-year-old is surrounded by several hundred neighbors, students and fellow travelers, all here for his annual Prairie Festival. Some came from thousands of miles to gather in Jackson's barn to share ideas about the future of the planet in general, and agriculture in particular.

"We have music, the barn dance. It's sort of an intellectual hootenanny!" he says.

Jackson is part scientist, part philosopher, part farmer. More than 30 years ago, he gave up his brief career as a professor to set up this 600-acre farm on the gently rolling uplands of Kansas. He calls it the Land Institute; it includes not only the barn and other out-buildings, but an office in a suburban-style ranch house, a lab building made partly of old telephone poles, and a comfortable, rustic home.

In 1976, when the institute was founded, Jackson says a lot of time was "devoted to a search for sustainable alternatives in agriculture, energy, shelter, waste management."

This grand plan turned out to be too much to bite off all at once. So Jackson quickly tore down his bulky windmills and the old solar panels, and focused on the topic closest to his heart: trying to solve "the 10,000-year-old problem of agriculture."

The problem, Jackson explains, is that agriculture in most places is based on practices that use up limited resources. The major grains, like wheat and corn, are planted afresh each year. When the fields are later plowed, they lose soil. The soil that remains in these fields loses nitrogen and carbon.

This worries Jackson because vast quantities of soil are washed out of the fields and down the rivers, and the soil that's left is gradually losing its nutrients.

Trying to figure out how to solve this problem, Jackson realized the answer was right in front of him. It was the patch of native prairie on his own farm — full of grasses from ankle to shoulder height, peppered with white and purple flowers, and surrounded by shrubs and cottonwood trees.

"Here is a steep, sloping bank with a lot of species diversity, featuring perennials," Jackson says. "This is what I call nature's wisdom."

Perennials are plants that put down strong roots 10 feet or more into the ground and hold the soil in place. Perennials live year-round, unlike annual crops that get planted every year. In Kansas, perennials survive the harsh winters and the blazing hot summers.

In contrast to fields that get plowed every year, native prairie vegetation actually improves the soil year after year. The amazing variety of plant life in this prairie also makes it resilient against disease.

"So I thought, why can't we solve this 10,000-year-old problem?" Jackson says. "The solution is to build an agriculture based on the way nature's ecosystems work."

This turned out to be both a major plant breeding challenge, and a social one. It's not easy to get farmers and the public at large to rethink what farms should ideally be — not just areas sacrificed to food production, but actually part of nature.

Jackson's been spreading this word through his annual prairie festival for the past 31 years.

To make progress on the biological problem, Jackson recruited a handful of young and ambitious Ph.D. plant breeders. Their mission: nothing less than to reinvent the world's most important crops. 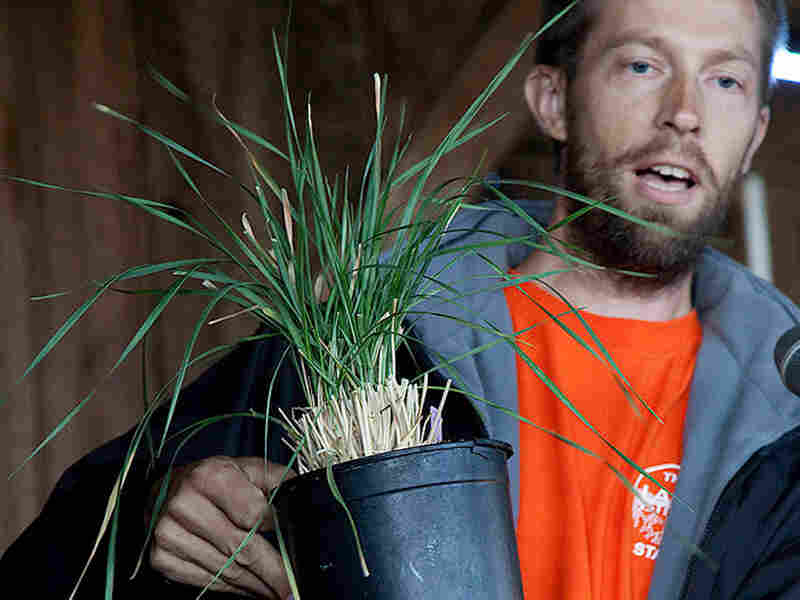 At the annual Prairie Festival, Land Institute scientist Lee DeHaan shows off a new strain of wheat that was created from crossing wheat with a perennial grass. Dennis Dimick hide caption 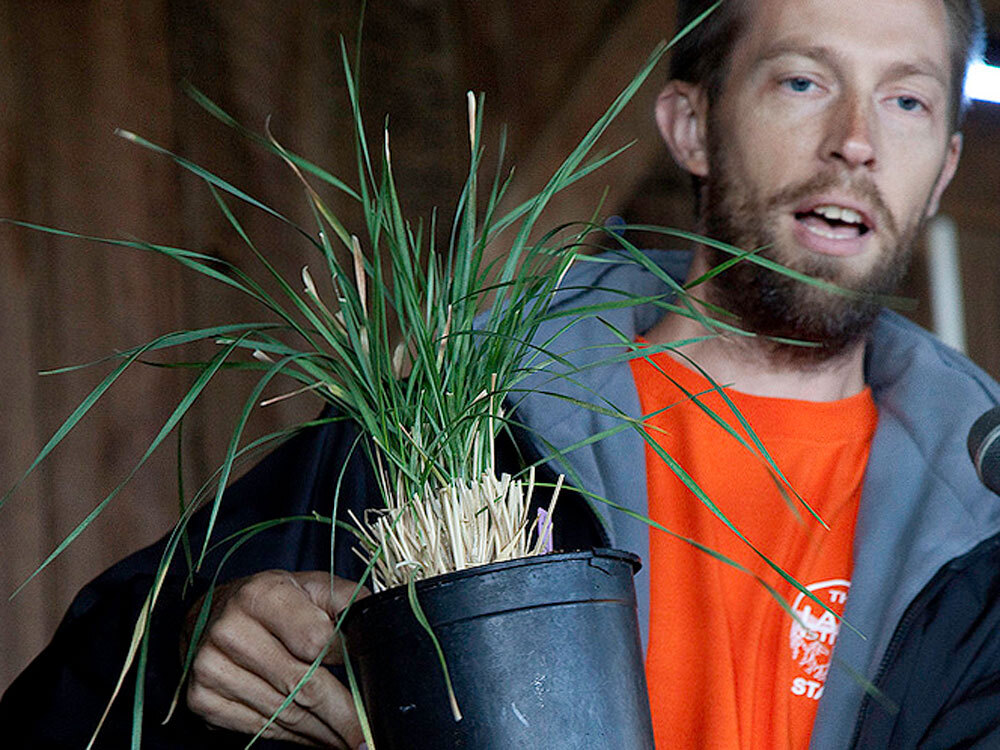 At the annual Prairie Festival, Land Institute scientist Lee DeHaan shows off a new strain of wheat that was created from crossing wheat with a perennial grass.

Jackson decided to figure out a way to breed grain crops so they can be planted once, actually replenish the soil, and be harvested year after year. One of the scientists Jackson brought to the Land Institute to work on this is a Minnesota farm boy turned plant breeder, Lee DeHaan.

"At the time I started here, they said, 'Let's put the youngest guy on wheat, because maybe he can see it through,' " DeHaan says. "We're not expecting it to be something that's real easy to do or something that we'll see the results of really soon."

DeHaan joined the institute in 2001, and his job is to crossbreed regular wheat with other grasses that survive year-round.

"We decided to really go at this aggressively and make a huge population of plants that are very diverse. So that first year, we made about 1,500 new plants."

It's taken DeHaan years and years, but as we look around the greenhouse today, we see the result of his work: hundreds of plants, sitting on waist-high benches, that are a cross between wheat and grasses that grow year-round.

DeHaan will soon plant them in the fields. He hopes that maybe — just maybe — up will sprout a wheat plant that produces lots of grain and actually tastes something like wheat, and has the hardiness of a native prairie grass.

Waiting For The Big Breakthrough

"It's like scratching off lottery tickets," DeHaan says. "Maybe there's something amazing in there. We'll see. That's why we love to be plant breeders. Maybe this is the year when you make the big breakthrough. That's kind of the fun of it."

DeHaan has taken a native wheat relative that's already a perennial, and hybridized it to produce grains that are more like the wheat we actually grind into flour. They call this new kind of wheat Kernza.

Other scientists at the Land Institute are working on perennial sunflowers and perennial sorghum. Sorghum is another important staple crop around the world, though it's grown mostly for cattle food here in the United States.

It all takes lots of time, but Wes Jackson is a patient man. 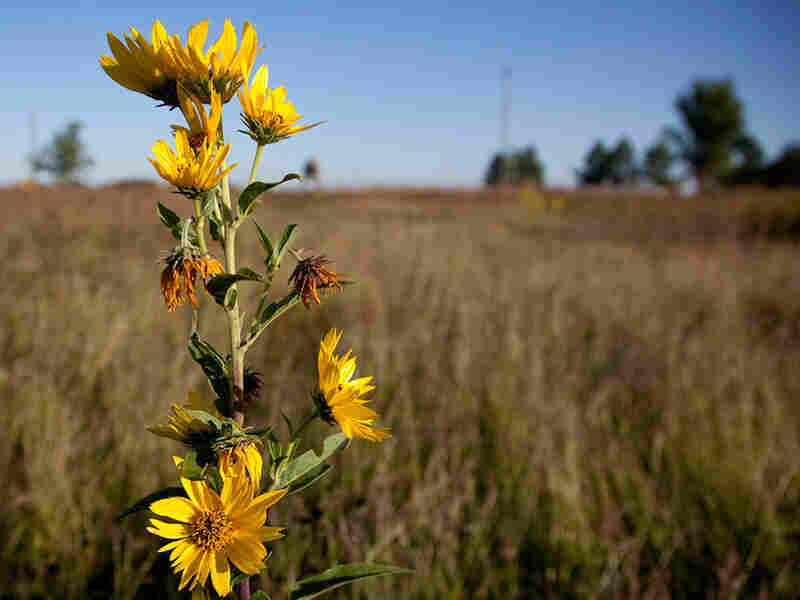 The Land Institute is hybridizing sunflowers with closely related prairie species, hoping to come up with sunflower crops that don't have to be replanted every year. Dennis Dimick hide caption 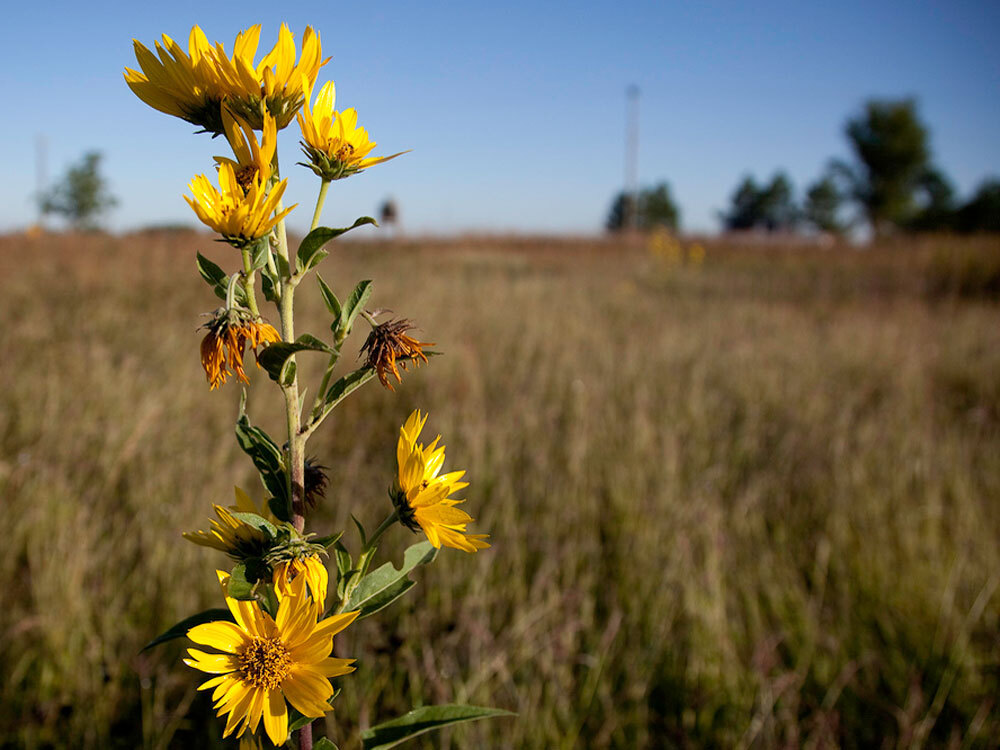 The Land Institute is hybridizing sunflowers with closely related prairie species, hoping to come up with sunflower crops that don't have to be replanted every year.

The World Living Beyond Its Means

Climate change and increased populations around the world are problems that are all tied together, Jackson says. They all point to a world that's living beyond its means. Jackson's goal is to create a whole new system that will let us live sustainably.

"You start with a resilient food system," he says. "And we don't have one."

Maybe someday we will. As the silver-haired Kansan is fond of saying: If you're working on a problem you can solve in your own lifetime, you're not thinking big enough.