Accessibility links
N.Y. Mandates Flu Shots For Health Care Workers New York is the only state so far to require all workers in hospitals and clinics to get immunized against the flu. Advocates say it's a matter of patient safety, while opponents worry about the effectiveness and side effects. They also argue about the principle: They want control over what's injected into their bodies. 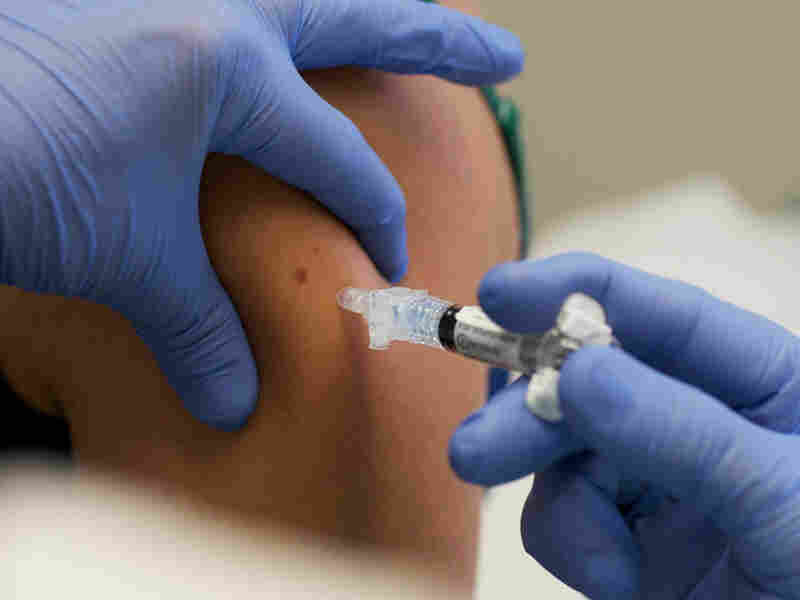 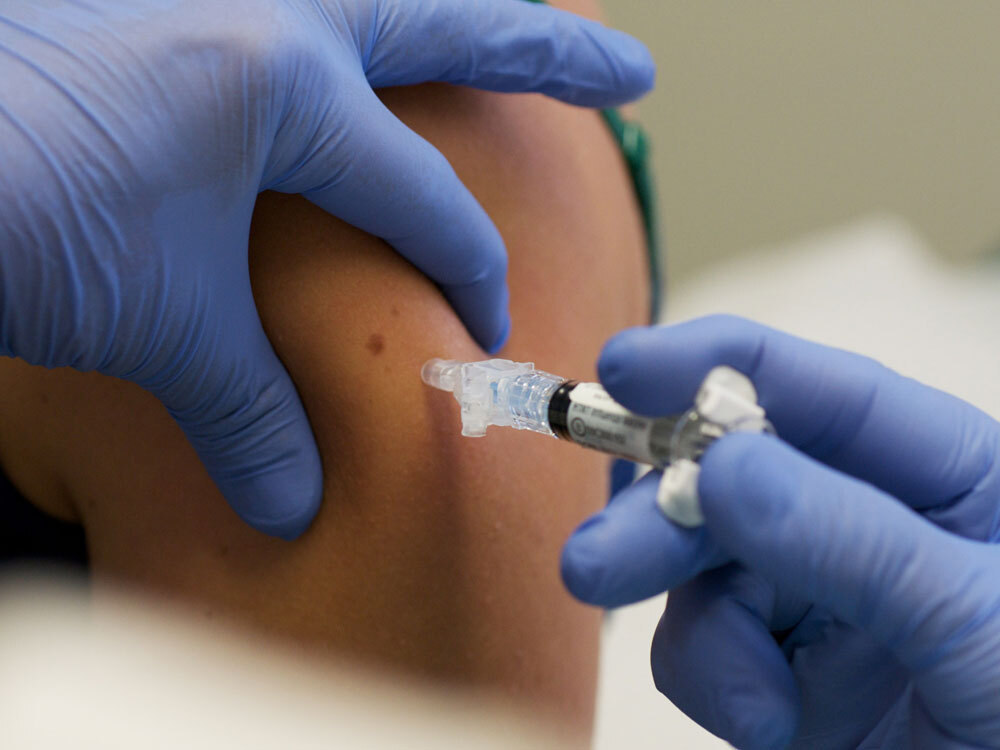 A new regulation in New York requires most health care workers to get vaccinated against seasonal flu and the new H1N1 virus.

Most U.S. health care workers don't get flu shots. This has always been the case, despite 28 years of jawboning by the Centers for Disease Control and Prevention.

But that's going to change this fall in New York state. A new regulation there aims to stop health care workers from passing the flu to patients. By the end of this month, all hospital and clinic workers are supposed to get vaccinated against seasonal flu. By Nov. 30, they are required to get the swine flu vaccine.

Nurse Jemma-Marie Hanson is like most U.S. health care workers when it comes to flu shots.

"I've never gotten vaccinated against the flu," she says. "I was always extremely healthy — never got the flu. And I went through 20-plus flu seasons of taking care of patients without getting it."

Experts say the No. 1 reason health care workers give for not getting a flu shot is, "I don't need it."

But this year, if Hanson refuses to get a flu shot, she'll have to wear a mask for the duration of flu season. Or she might lose her job.

New York is the only state so far to require all workers in hospitals and clinics to get immunized against the flu — both seasonal flu and the new H1N1 virus that's causing most flu cases this fall.

Dr. Gus Birkhead, New York's deputy health commissioner, says the state has never gotten even 40 percent of its health care workers immunized against flu --- despite what he calls "year-in, year-out" campaigns to persuade them to get flu shots. So two years ago, officials began thinking about a different approach.

"I think it was really sitting around each year reviewing what had happened and all of our efforts, and then being disappointed by the end result," he says. "We began to come around to this idea that some kind of a requirement was going to be needed."

Mandatory flu vaccination is not something that sits well with Hanson and her friends.

"The nurses that I've been speaking to are extremely concerned that they're not being given the information that they need to make an educated decision on whether they should be taking the seasonal flu vaccine as well as the H1N1 vaccine," she says.

It's unclear how many health care workers are opposed to the requirement. But feelings are running strong among some New Yorkers.

"The level of anger that we are hearing is growing, that's all I can tell you," says Joel Shufro, director of the New York Committee for Occupational Safety and Health, a coalition of 200 union locals. "Whether it's correct or not, people are very upset."

Opponents cite a number of reasons they're against mandatory flu shots. The vaccine doesn't work very well, they say. Experts say most years the efficacy is 70 to 80 percent.

Many health care workers believe that flu shots can cause the flu. Vaccine experts say that belief is mistaken.

Many opponents worry that the flu vaccine might cause serious side effects. A survey of pharmacy directors at 341 U.S. hospitals, released Tuesday by the American Society of Health-System Pharmacists, indicates that 54 percent of hospital employees are asking if the new H1N1 vaccine, just coming off production lines, is safe.

"The H1N1 vaccine is prepared using the same methods as the seasonal flu vaccine," says Dr. Lynnae Mahaney, president of the hospital pharmacist group. "Clinical testing shows this vaccine is safe and should definitely be used by people who are at most risk."

If rare side effects arise, say proponents of mandatory vaccination, they are far outweighed by the risk that unvaccinated health care workers pose to vulnerable patients with low immunity and other diseases.

Shufro says many of his members' objections come down to this: "There are a large number of people who believe that this is a matter of principle about what is being injected into their body," he says. "They want control over that."

Dr. Joyce Lammert, chief of medicine at Virginia Mason Medical Center in Seattle, has heard all the arguments. In 2005, her hospital started requiring its staff to get flu shots.

"I'm passionate about it," she says. "I think it's one of the most important things that we can do for our patients that's really very easy."

Not that persuading workers is always easy. Nurses at the Seattle hospital got a judge to rule that mandatory vaccination needs to be collectively bargained. The judge also ruled that the hospital has the right to require nurses to wear masks if they decline to get vaccinated.

In the end, Lammert says, the objections largely faded away.

"The first year, we immunized 98 percent of our folks, and the other 2 percent were masked during the season," she says. "Since the first year, it's really not been a big issue. The culture's basically changed, and people just assume it's something we do in the fall."

Encouraged by the Seattle experience, more U.S. hospitals are starting to require flu shots. Barnes-Jewish Hospital in St. Louis is one. Hospital Corporation of America, the nation's largest chain, just started requiring its 120,000 employees to get seasonal flu vaccine, and so has MedStar Health, a health care network in the Washington-Baltimore area.

Dr. William Thomas, MedStar's chief medical officer, says the network is prepared to tell people they can't work in its hospitals if they won't get a seasonal flu shot — even to the point of firing somebody. (MedStar isn't requiring the new H1N1 vaccine, largely because the company isn't certain that it can get access to an adequate supply, Thomas says.)

He says mandatory flu vaccination is long overdue. He sees it as part of the recent push for a wide range of patient-safety measures.

"Quite honestly, when I talk to people around the country, they all know we should have done this years ago," Thomas says. "We didn't have the courage."

That is, the courage to take on opponents. But now, when some doctors have told Thomas they don't want to get a flu shot, he just says: "Let me know the next time you go into the operating room if you don't want to scrub."

That usually ends the argument, he says.