Accessibility links
Dow 10,000: What It Says About The Economy As the Dow closed above the psychologically important 10,000 mark, many economists say it's a sign of recovery. But it will still be a while before the jobs come back. 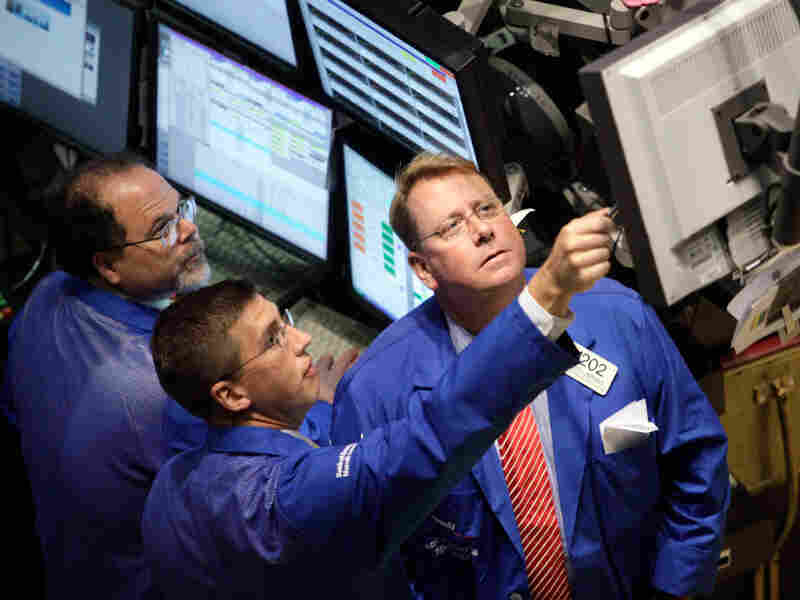 The Dow has rebounded by about 50 percent from its lows in March, and broader indexes have risen even more sharply. Here, traders work on the floor of the New York Stock Exchange on July 23. Mary Altaffer/AP hide caption 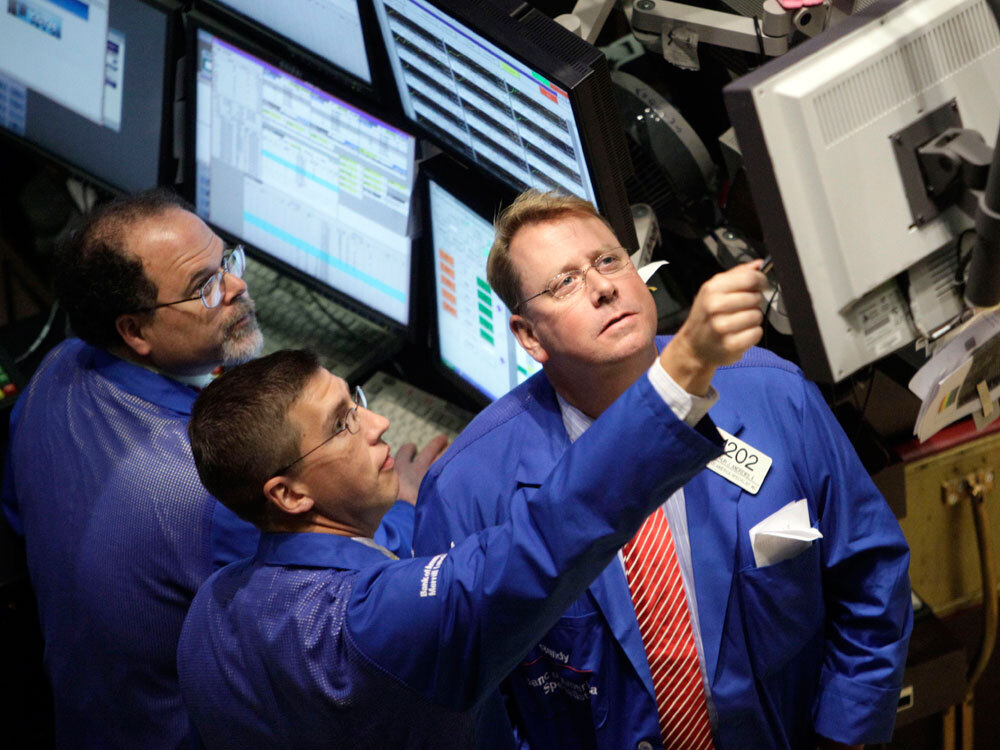 The Dow has rebounded by about 50 percent from its lows in March, and broader indexes have risen even more sharply. Here, traders work on the floor of the New York Stock Exchange on July 23.

The Dow Jones industrial average closed above the psychologically important milestone of 10,000 on Wednesday, and there is a growing sense among economists and U.S. companies that a real recovery may finally be under way.

The Dow has rebounded by about 50 percent from its lows in March, hitting its highest levels in more than a year.

"You have the makings of a recovery," says Bill Achtmeyer, the chairman and managing partner of the Parthenon Group, a Boston-based strategic advisory firm. "I think it will be a gradual uptick, but I think it will be sustained."

Others are even more optimistic. "We are in an economic recovery," says John Silvia, the chief economist at Wells Fargo Securities LLC in Charlotte, N.C. "Stocks are rallying because they do sense it's a recovery, and corporate profits will be strong for the next year or two."

Now that the Dow has closed above 10,000 — it finished Wednesday up 144 points at 10,015.86 — it is bound to boost confidence in the short run, but it won't extinguish the lingering doubts about how strong that recovery is going to be.

Many Americans say that they have yet to feel the impacts of even a nascent recovery. A poll conducted last week by CBS News shows that 84 percent of Americans say the economy is in bad shape, although only 18 percent say things are still getting worse.

New figures on retail sales released Wednesday show a 1.5 percent decrease in purchases, but the drop was less than expected and largely reflected a sharp decline in automobile sales following the end of the government's Cash for Clunkers program.

The stock market's verdict is a bit clearer. The broader indexes have risen even more sharply from their lows than the Dow, with the Standard & Poor's 500-stock index up about 58 percent, and the tech-heavy Nasdaq up about 66 percent.

The momentum has the potential to be stalled unless we see demand across the economy start to pick up. It really comes down to jobs.

Economists are heartened in particular by how the markets are moving upward rather steadily, which suggests that they could hold onto their gains.

"We haven't seen wild up-and-down moves in the market," says Brian Bethune, the chief U.S. financial economist for IHS Global Insight, an economic forecasting firm. "The tenor looks good — not anything that would suggest any pathology that we're going one way or the other to excess."

Bethune says that the "gloom and doom" forecasts from earlier in the year appear to have been overstated.

"Things have evolved a lot better than the expectations or the negativity that prevailed early in 2009," he says. Bethune says the banking sector recovered more quickly than many economists had expected, and exports have posted an encouraging rebound.

"What was happening was that the business sector was adjusting with amazing speed," he says, "and they were actually able to generate some productivity gains."

Growth Forecast, But 'It Comes Down To Jobs'

A survey of economists by the National Association for Business Economics found that forecasters are predicting that gross domestic product will increase by 2.9 percent in the second half of 2009, following a sharp drop in the first half. Economists at the Federal Reserve echo the general finding.

"All told, I expect that the recovery in U.S. economic activity will proceed at a moderate pace in the second half of this year before strengthening some in 2010," the Fed's vice chairman, Donald Kohn, told a group of business economists on Tuesday.

Achtmeyer says that he has also detected a significant shift among his clients, which are a mix of large consumer and industrial firms. "They seem to be much more interested in thinking about acquisitions and growth plans," he says. "They have finished the cost-cutting by and large."

But there are several looming concerns that could strangle any recovery — particularly, an unemployment rate that is expected to hit 10 percent by the end of the year. Economists say it is unlikely to drop quickly, meaning many Americans will continue to feel the recession's effects long after a recovery has technically taken hold.

"Staying at 10 percent could be a grave concern," says Jack Kleinhenz, who runs a business and economic consulting firm based in Cleveland. "The momentum has the potential to be stalled unless we see demand across the economy start to pick up. It really comes down to jobs."

The recovery in the job market always tends to lag the broader economy's recovery. But economists say that businesses could be even more reluctant to resume hiring after such a severe economic crisis.

"There's extreme caution among businesses about managing the bottom line and not getting overextended," says Bethune, of IHS Global Insight. "There just isn't enough confidence out there for them to think about raising employment levels."

Economists are also casting a wary eye toward Washington, which is debating a host of major policies that could affect the fortunes of U.S. companies. Along with a push for a major health care overhaul, which could affect the employment costs, the Obama administration is pushing to re-examine corporate tax loopholes and to strengthen the financial regulatory system.

There's also the question of how the Fed and other institutions will unwind the massive efforts they have undertaken to prop up the nation's economy, including keeping interest rates hovering near record lows.

"The patient has recovered, and you've given him some drugs. But once you take away those drugs — the stimulus — is the patient going to get out of bed and run a mile or five miles?" asks Wells Fargo's Silvia. "It is sustainability. It is the question of what happens to interest rates and the dollar."

More broadly, there is a sense that the economy is in uncharted waters, which makes businesses, consumers and economists alike leery of taking risks.

"None of us have been through this before," Achtmeyer says. "We're all coming out of the worst downturn we've had in our professional lives, so people are being cautious."