Accessibility links
Reality TV's Thoroughly 'Modern' Mistakes Judges on shows like Project Runway use the word "modern" frequently — and lazily. In the world of art and design, "modern" means Kandinsky or Picasso, Schoenberg or Stravinsky — an approach and an aesthetic that signifies something that's more than merely "contemporary." Hearing "modern" tossed around on reality design shows makes modernism experts cringe. 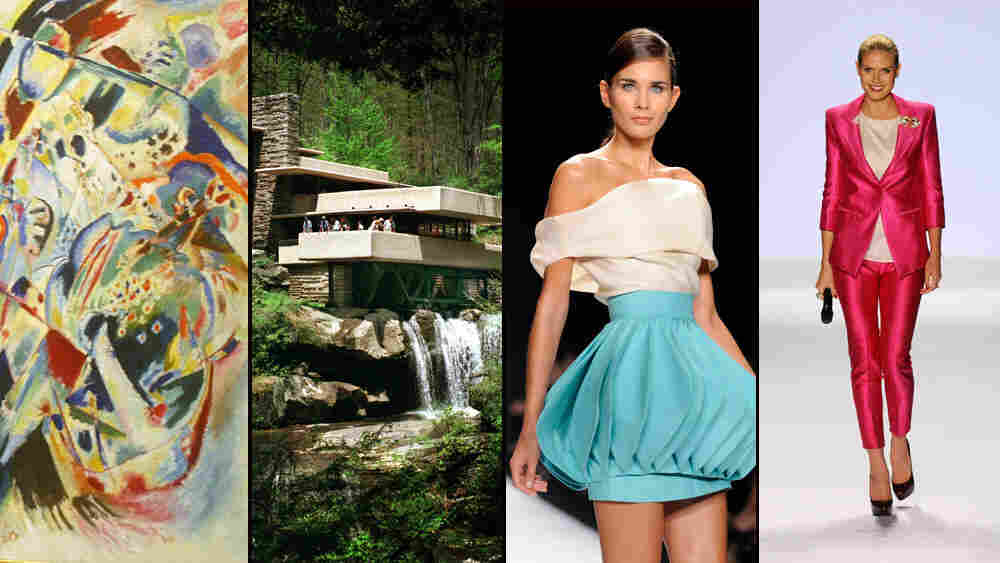 Style Guide: The word "modern" has become a sort of all-purpose descriptor on reality television's design shows. But in the world of art and design, "modern" refers to the modernist movement — such as (from left) Kandinsky's paintings or Frank Lloyd Wright's designs — and not the latest fashions on Project Runway. Credits, from left: Michael Kappeler/AFP/Getty Images; Gene J. Puskar/AP; Brian Zak/Sipa Press/AP; Richard Drew, AP hide caption

If you watch Project Runway — or any other design-oriented reality show — you'll hear the word "modern" employed over and over again. But in the context of reality TV, the word is often being misapplied.

Modern and contemporary can — and do — mean the same thing, of course. But in the world of art and design, "modern" means Kandinsky or Picasso, Schoenberg or Stravinsky. It means daring experimental writers such as Ezra Pound or Gertrude Stein. It means Frank Lloyd Wright sweeping out the overstuffed and fusty in favor of long, clean lines.

It does not mean a tiki bar put together for $100 on the HGTV show Design Star, says modernism expert Douglas Mao, chair of the English department of Johns Hopkins University.

Mao says he cringes a little bit when he hears the word tossed around by lazy designers. He's an avid fan of Project Runway, and he's noticed that the judges tend to use "modern" and "contemporary" interchangeably. Which is not necessarily wrong, he's quick to say — just surprising when it comes from people who've presumably studied the history of art and design.

"Contemporary ... in the world of fashion has a slightly outdated quality," Mao adds. "It has a certain down-market flavor, I think — 'contemporary casuals' and so on."

"Contemporary" smacks of smug, neutered tastefulness — of the Pottery Barn's safely slipcovered mass appeal. Mao thinks that judges on design shows need a brand new word to suggest something is fresh and bold, but without referring to the modernist movement:

"If I were [Project Runway judge] Nina Garcia — that's a sentence I've never uttered before — I might sometimes just say 'new,' " Mao says. " 'Surprising.' 'Exciting.' I don't know. But I don't think there's one word that's the right word."

Until that word comes along, Mao says he can live with "modern" basically meaning "good" on reality TV. Modernism was an amazing development in arts and literature, he says — and the more we aspire to it, the better.