Accessibility links
Moby, Recorded Live In Berlin Moby's latest album, Wait for Me, is his best new release in a decade, full of beauty, sadness and celebration. The singer and electronic artist is currently on tour in support of the record, giving sold-out performances to packed arenas and smaller clubs throughout Europe and the U.S. For this stellar concert, recorded live in Berlin on June 26, Moby treated fans to nearly two hours of new songs and old favorites from a career spanning nearly 20 years. 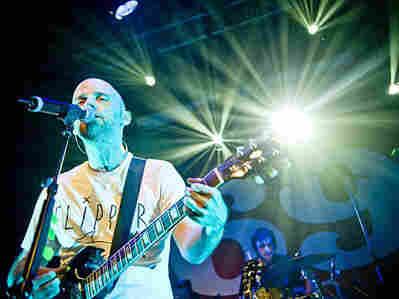 Moby performs live on his European tour. courtesy of the artist hide caption

Shot In The Back Of The Head

"Why Does My Heart Feel So Bad?"

I've enjoyed most of Moby's music this decade, but it wasn't until I heard Wait for Me this summer that I had a Moby record I loved as much as I loved his 1999 album Play.

So when I heard he was touring in support of Wait for Me, I couldn't wait to see him. In fact, we contacted Moby to try to webcast one of the early dates on his tour, at the 9:30 Club, back in September.

As it turns out, members of Moby's band — many of whom are European musicians — couldn't get the proper visas to enter the U.S. in time for the 9:30 Club date. So at the last minute, he scrambled to put together a new group and rehearse for an already-scheduled U.S. tour. Moby was rightfully a bit hesitant to webcast a concert with a band that wasn't fully seasoned with his new material, so we didn't record that show. Instead, he sent us this concert, recorded in Berlin on June 26, and it is stellar.

I did go to that 9:30 Club show — and, despite Moby's concerns, the music was great. Moby has a deep well of old and new material to pull from, and he assembled a great mix of pounding dance beats and heartfelt, soulful songs. For anyone who hasn't pulled out a Moby record in a while, after you hear this show, you're bound to want to.