Accessibility links
Evicted Israeli Settlers Attack Palestinian Land It's a tactic extremist settler groups are calling "the price tag." Each time settlers are evicted from an illegal outpost, they retaliate with an attack on Palestinian land. "It's smart but evil," a lawyer with an Israeli human rights group says. "Security forces will have to divert manpower energy to deal with the new problem." 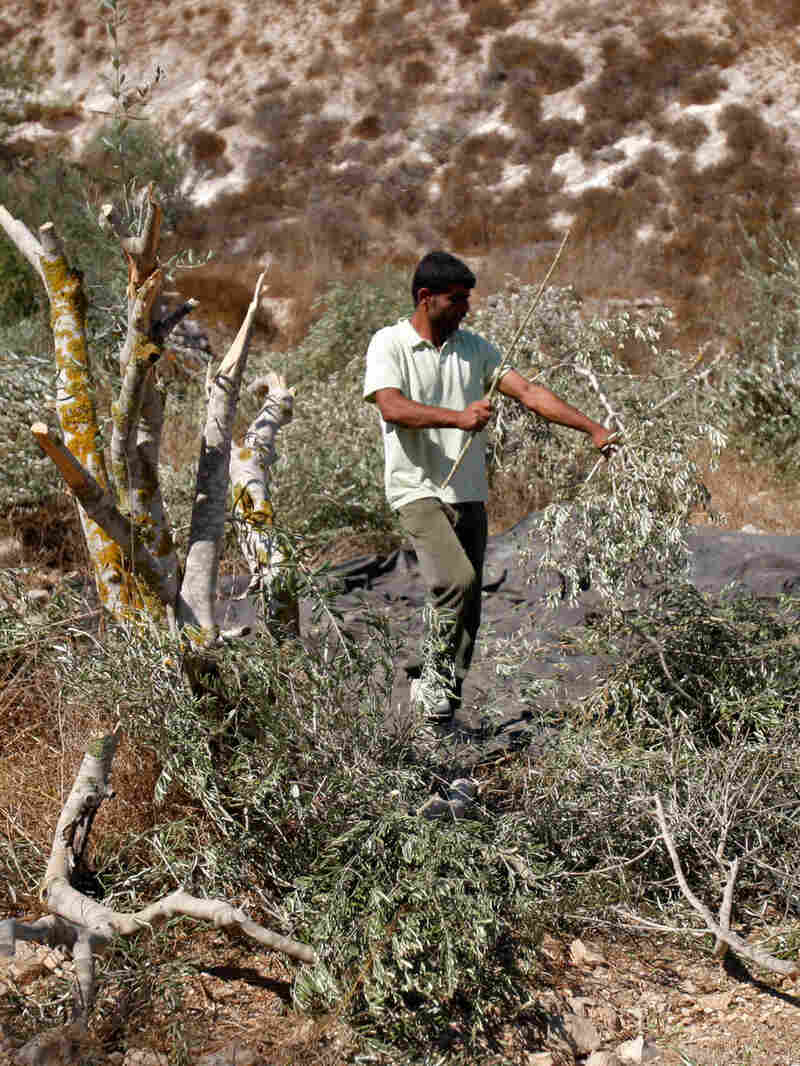 A Palestinian farmer from the village of Burin picks olives from trees farmers say were torn down by Jewish settlers from the nearby settlement of Yitzhar in the northern West Bank. Nasser Ishtayeh/AP hide caption

In the occupied West Bank this week, Israeli authorities forcibly evacuated an illegal outpost established by a group of Jewish settlers. The settlers responded with an attack on nearby Palestinian land.

It's a tactic extremist settler groups are calling "the price tag." Each time settlers are evicted from an illegal outpost, they retaliate with an attack on Palestinian property.

In this case, some 20 settlers set fire to Ahmed Ghanem's orchard a few hours after Israeli police evacuated a small outpost on Sunday, he says. The Palestinian farmer's field and olive orchard lie just between the Jewish settlements of Kedumim and Yitzhar, in the northern part of the West Bank.

Ghanem says the attack couldn't have happened at a worse time: It's olive harvest season now.

"They managed to burn my land and the land of my neighbor, and they burned 150 trees," he says, surveying the damage from a craggy outcropping.

Ghanem says there's little he can do to protect his property. "The settlers can do whatever they want. I am helpless," he says.

Michael Sfard, a lawyer who works with Israeli human rights group Yesh Din, says the group has been monitoring the "price tag" tactic for at least a year.

"It's quite smart but evil," he says. "The security forces will have to divert the resources, manpower and energy to deal with the new problem."

According to a Palestinian Authority official who deals with the settlements issue, 3,400 trees have been destroyed in settler attacks in just this part of the West Bank since the beginning of the year.

Sfard says the tactic works. Because of the settler attacks, he says, Israeli courts are now more reluctant to approve petitions for the evacuation of illegal outposts.

"I mean, the court tells me time and again, 'You know that it's not that simple to do what you are asking.' And I'm always saying, 'Well, it means that being violent turns out to be a very clever thing to do,' " he says.

A day after the attack on Ghanem's orchard, a group of settlers returned to the outpost that had been evacuated by Israeli authorities. The detritus of their scuffle with the police lay scattered on the ground.

Yishai Gilad, 19, says the Jews have the right to the land here.

"We are here to show that we can build freely," he says. "The land of Israel belongs to the Jewish people. We are settling here and in other places because it's our right."

Gilad says he was not responsible for the burning of Ghanem's olive trees, but he won't discuss it further.

The Israeli army has ordered some extremist settlers to leave the West Bank for their alleged involvement in attacks on Palestinian property. The Israeli authorities have also announced that during the olive harvest, a number of areas of potential friction will be closed to Israelis to protect Palestinian workers. And the government says it will continue to dismantle illegal settlement outposts.

Some in the settler movement are questioning the "price tag" tactic. Daniela Weiss says she doesn't think it's the right way forward.

"I'm not interested in how to retaliate, what to do to this Arab or what to do to this soldier," she says. "And I'm not interested in it, and I do not believe in it. I believe that sitting in the night on a hilltop with five boys and encourage them to cling hard to that soil, to that hill is the No. 1 effort that needs my support, and to this I dedicate myself every day, every night, every second of my life."

Other settler groups NPR contacted by phone also distanced themselves from the price tag attacks, while acknowledging that they are likely to continue.