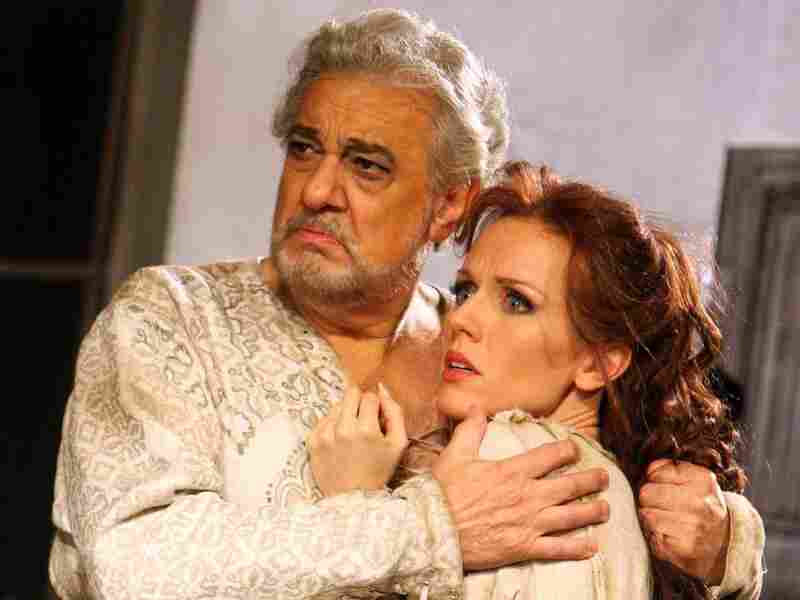 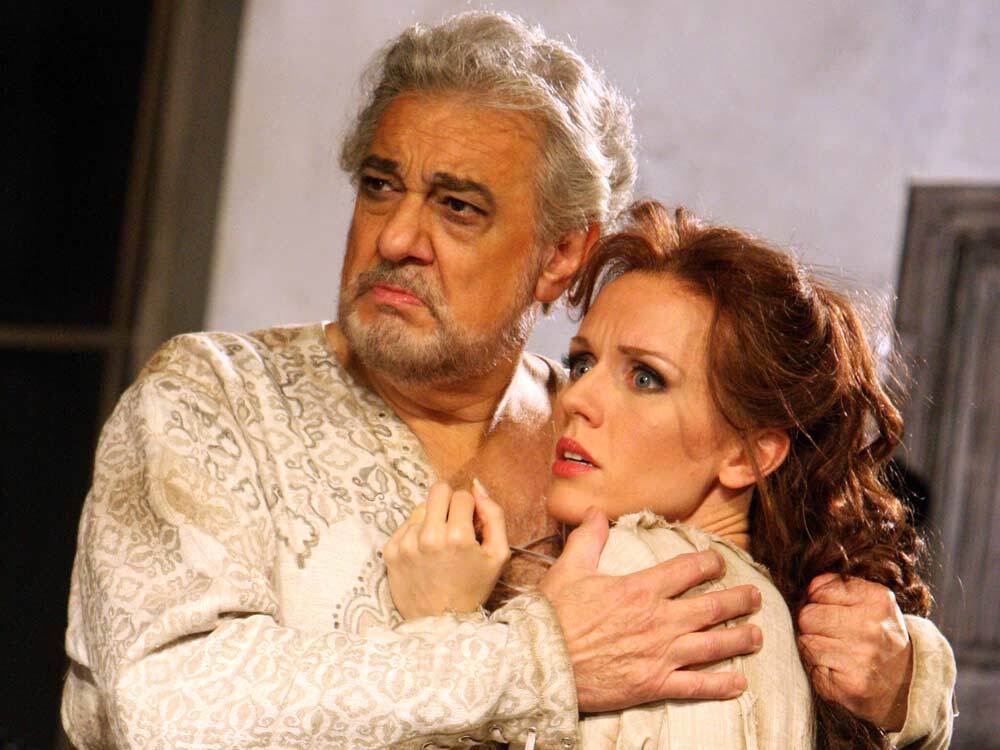 Placido Domingo stars as Bajazet, with soprano Sara Coburn as Asteria, in the Washington National Opera's production of Tamerlano.

For more than four decades, tenor Placido Domingo has been one of the world's most acclaimed, and most active opera singers. Never content with the status quo, he has lived up to one of his favorite sayings: "If I rest, I rust."

Domingo says he was quickly drawn to Handel's Tamerlano and the role of Bajazet.

The uniquely heroic quality of Domingo's voice was always superbly suited to the most popular operatic repertory, and he built a legendary career starring in the great operas of Giuseppe Verdi, including Aida, Otello and Il trovatore, along with the verismo potboilers of Giacomo Puccini, such as Tosca and Madame Butterfly.

Yet Domingo has gone far beyond the familiar dramas of opera's "standard rep." He has explored his Spanish heritage by entering the musical world of zarzuela, and he has starred in operettas, including Lehar's The Merry Widow. Domingo has also tackled brand new roles in brand new operas, such as The First Emperor by Tan Dun.

Astoundingly, Domingo has added new roles to his personal repertory in nearly every year since 1959, when he appeared in Verdi's Rigoletto in Mexico City. In 2008, audiences at the Washington National Opera heard Domingo in the 126th role of his career, when he sang the part of Bajazet in George Frideric Handel's vivid tragedy, Tamerlano.

For Domingo, Handel's opera was yet another departure from the tried and true; Baroque opera had never been a Domingo specialty. Yet he describes the role of Bajazet as "ideal for my voice." Bajazet was one of the first great tenor roles ever composed, and Domingo says it has a key element in common with one of his own, signature roles, the title role in Verdi's Otello: a great death scene. "In real life, I like to enjoy," Domingo says. "But on stage ... I am a masochist! The more I suffer, the better I can deliver on my music, and feelings."

On World of Opera, the Washington production of Tamerlano is presented by host Lisa Simeone, from the Kennedy Center for the Performing Arts. The stars also include another of today's great voices, countertenor David Daniels, in title role, along with the brilliant young soprano Sarah Coburn as Asteria.

The Story of 'Tamerlano' 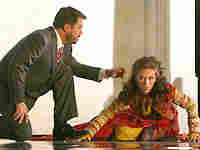 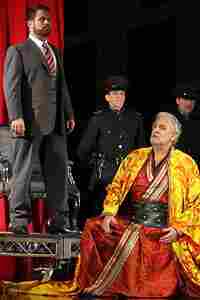 Tamerlano looks on as Bajazet (Placido Domingo) prepares for his own death. Karin Cooper hide caption 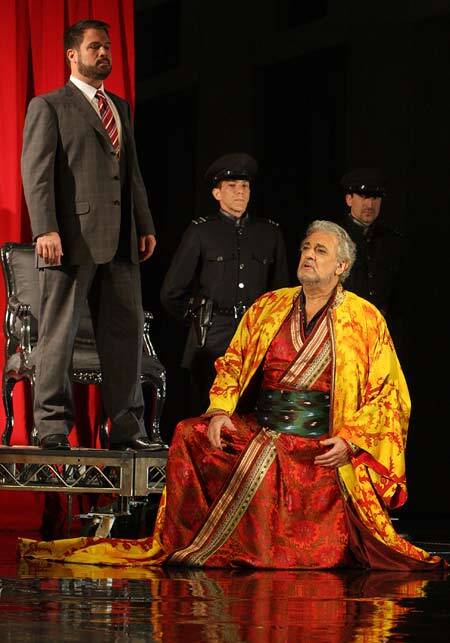 Tamerlano looks on as Bajazet (Placido Domingo) prepares for his own death.

Handel composed Tamerlano for a premiere at London's King's Theatre in 1724. The opera is in three acts and is loosely based on the historic conflict between Bajazet, a Turkish sultan, and the Tartar conqueror Timur, or Tamerlano, who ruled much of western and central Asia in the 14th century.

The opera's setting is the conquered Turkish city of Prusa, and as Act One opens, Tamerlano is holding Bajazet captive, along with Bajazet's daughter Asteria. Bajazet's love for Asteria is the only thing that keeps him from committing suicide, rather than submit to captivity.

Tamerlano has defeated Bajazet and the Turks with the help of a young, Greek prince, Andronico. Now Tamerlano offers to help Andronico claim the throne of Greece. Andronico politely declines, saying he would rather remain at Tamerlano's side. But his real motive is passion — he and Asteria are deeply in love.

Tamerlano says that Andronico is welcome to stay — but he also reveals that he himself is in love with Asteria. And Tamerlano has a request. He wants Andronico to seek Bajazet's consent for Tamerlano to marry Asteria. In return for that favor, Andronico is promised the hand of Irene, the Princess of Trebizond — even though, until now, Irene has been engaged to Tamerlano.

When Tamerlano tells Asteria of his intentions, she assumes that Andronico has betrayed her. And when Andronico visits Asteria and her father, to press Tamerlano's case, they both reject the idea out of hand.

Irene then arrives from Trebizond, escorted by Andronico's aide, Leone. She's angry when Tamerlano doesn't appear to receive her. Irene is even more upset when Andronico tells her that she's now betrothed to him, not Tamerlano. Irene wants to confront Tamerlano then and there, but Andronico advises against it. Andronico is also concerned for Bajazet's life, and he knows he can never reveal his love for Asteria.

As Act Two begins, things seem to have changed. According to Tamerlano, Asteria has agreed to marry him. Before the day is out, he says, there will be a double wedding: Tamerlano and Asteria, along with Andronico and Irene.

When Andronico hears this, he's furious with Asteria for agreeing to the marriage. Asteria tells him that it's his own fault: It was his betrayal that drove her to the marriage. Andronico vows to kill both Tamerlano and himself, but Asteria says it's too late.

Meanwhile, Princess Irene makes an appearance — disguised as her own messenger. Meeting with Tamerlano, she tells him that the Princess will go home to Trebizond unless Tamerlano agrees to marry her. Tamerlano says that he might marry Irene — but only if Asteria proves to be an unworthy bride.

Tamerlano then leads Asteria into the throne room. When Bajazet denounces her, Tamerlano orders that Bajazet be thrown to the floor, so Asteria will have to step on him as she ascends the throne. Asteria won't do this, and asks Bajazet to forgive her — but he refuses.

Tamerlano wants Irene to attend his wedding. But when she arrives, again dressed as her own servant, she tells him that the Princess will only enter the room if the way to the throne is clear. Tamerlano says that can't happen unless Irene herself forces Asteria to step down.

Once more, Bajazet repudiates his daughter. And finally, Asteria reveals her true intentions. She produces a concealed dagger, and says she had planned to murder Tamerlano on their wedding night. At that, Tamerlano has Asteria and Bajazet thrown back into prison, and threatens them both with death.

To begin Act Three, the two are alone together. Bajazet produces a vial of poison, and divides it with Asteria. They agree that at the first threat of harm from Tamerlano, they will both commit suicide.

As it turns out, Asteria's defiance of Tamerlano has made him love her all the more, and he confesses this to Andronico. But Andronico has had enough, and admits that he and Asteria have been in love all along. When Asteria confirms their love, Tamerlano angrily orders Bajazet to be executed, and says Asteria will be married to a slave.

When Bajazet is brought in, Tamerlano becomes even more enraged. He orders Asteria and Bajazet to wait on him at his table, and he demands that Asteria kneel down to serve his drink. She does — but first she drops her part of the poison into Tamerlano's cup. Irene, who still wants Tamerlano for herself, sees this, and prevents Tamerlano from drinking it.

Tamerlano hands the poisoned cup to Asteria, and orders her to serve it to either Bajazet or Andronico. She ignores this demand and begins to drink the poison herself, but Andronico knocks the cup from her hand. At that, Tamerlano orders that Asteria be thrown to his slaves for their enjoyment, with her father and Andronico looking on.

That prospect is too much for Bajazet to bear, and he swallows his portion of the poison. In a long and extraordinary solo scene, Bajazet says farewell to his daughter, curses Tamerlano, and dies. Both Asteria and Andronico say that death is now their only choice, as well, and prepare for suicide.

But Bajazet's final, heroic moments have moved Tamerlano, and he relents. He decrees that he and Irene will be married, and that Andronico is free to marry Asteria and return to the throne of Greece. In a brief, somber finale, all look forward to a brighter, more peaceful time ahead.