Accessibility links
In Milliseconds, Brain Zips From Thought To Speech Researchers had the rare chance to learn more about how speech works by testing patients with electrodes embedded in their brain. The study found it takes the brain less than half a second to cue up what the mouth is about to say. 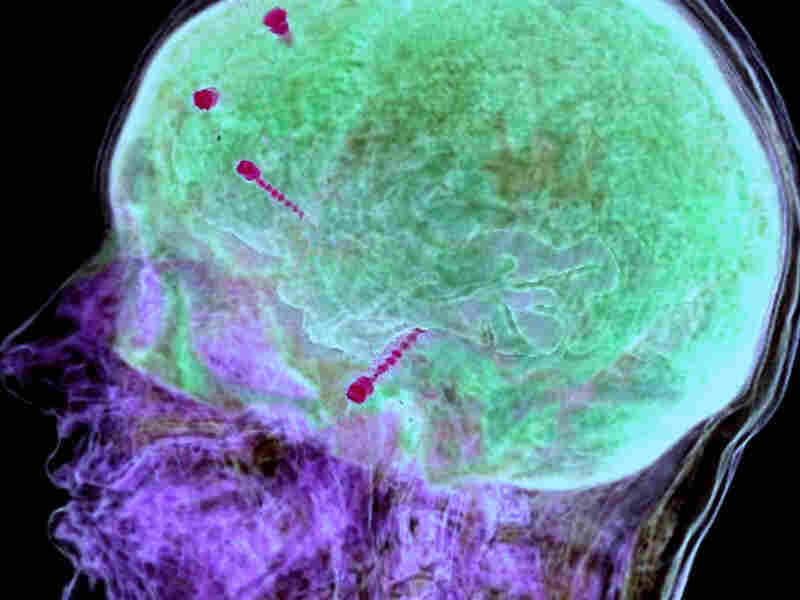 This X-ray shows electrodes that have been implanted in the brain of a patient with epilepsy before surgery to remove tissue causing the patient's seizures. The electrodes were also used to study how the brain processes language. Ned T. Sahin/Science hide caption 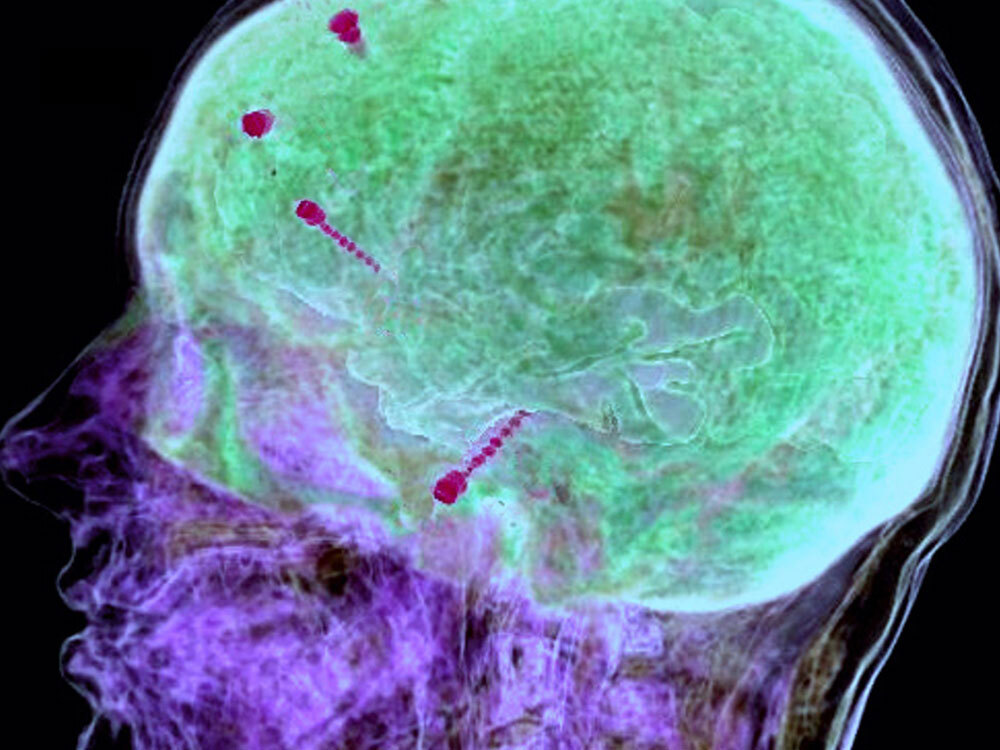 This X-ray shows electrodes that have been implanted in the brain of a patient with epilepsy before surgery to remove tissue causing the patient's seizures. The electrodes were also used to study how the brain processes language.

An unusual experiment is offering some tantalizing clues about what goes on in the brain before we speak.

The study found that it takes about half a second to transform something we think into something we say. And three very different kinds of processing needed for speech are all happening in a small part of the brain called Broca's area, which lies beneath the left temple.

The area of the brain is named after a 19th century physician named Pierre Paul Broca, who became famous for his study of two patients who couldn't speak.

"They could see and hear. They could even understand what people were asking them, but they couldn't answer back," says Ned T. Sahin, a researcher at Harvard University and the University of California, San Diego.

Broca discovered in 1865 that both patients had damage to the same small area of the brain. Ever since then, scientists have been trying to figure out precisely what happens in Broca's area.

But they didn't learn much until recently, when three people with epilepsy agreed to participate in a dramatic experiment. The results appear in the journal Science.

These people were scheduled to have surgery to remove brain tissue causing their seizures. To plan the surgery, doctors made a hole in each person's skull and placed dozens of electrodes deep in their brains, including Broca's area.

That gave brain scientists a rare opportunity, Sahin says. Parts of the brain involved in speech are usually hard to study, he says, because "animals don't speak, and humans don't like wires in their head."

Also, he says, it would be unethical to place electrodes in a healthy person's brain.

So Sahin and a team of researchers welcomed the chance to do an experiment on the three patients who already had electrodes implanted.

The Brain At Work

They had the patients perform a simple language exercise that required them to recognize a group of words, make a grammatical decision and formulate a verbal response.

These three steps require very different cognitive processes in the brain, and many researchers have suspected they occurred in different parts of the brain.

"But we found processing of all three within a very small space in Broca's area," Sahin says.

About 200 milliseconds (two-tenths of a second) after seeing the words, there was a spike in activity in the brain cells, suggesting recognition of the words on the screen.

At 320 milliseconds, "we saw evidence of grammatical processing," Sahin says. And at 450 milliseconds, researchers saw processing that indicated the brain was "cuing up what to say and getting ready to say it."

That timetable fits well with previous experiments showing that it takes about 600 milliseconds for a person to go from thinking something to saying something.

The Mysteries Of Speech

"This evidence will clearly help our thinking about the role of Broca's area in speech," says Peter Hagoort, a researcher at the Max Planck Institute for Psycholinguistics in the Netherlands.

Not only does the experiment show that Broca's area is involved in several different aspects of speech, he says, it shows that the cells performing different speech functions were within a few millimeters of one another.

That raises the possibility that a single brain cell may be carrying out different speech functions at different times.

"Sometimes I feel like we're a colony of ants who've come across a cell phone," he says. "We can describe parts of it, but we really don't know what's fundamentally going on here yet."

But as scientific understanding of Broca's area improves, so should efforts to help people with speech problems caused by damage to that part of the brain.