Accessibility links
Report: Stimulus Created At Least 30,000 Jobs A report from the White House detailing the effects of the stimulus says businesses that got federal contracts under the program saved or created more than 30,000 jobs in the program's opening months. Broader data on local spending won't be available until late this month.

A report from the White House detailing the effects of the stimulus says businesses that got federal contracts under the program saved or created more than 30,000 jobs in the program's opening months. Broader data on local spending won't be available until late this month.

30,383 - that's the magic number today from the Obama administration. It is a count, albeit a partial count, of jobs created or saved by the multibillion dollar stimulus package. And it's the first formal data the government has released about jobs associated with the stimulus. In a moment we'll hear from three states and from people who work some of those jobs. But first NPR's Brian Naylor has this story from Washington.

BRIAN NAYLOR: The job numbers reflect people who were hired by private contractors to do jobs for federal agencies - jobs like putting a new roof on a federal building or constructing a new fence at a military base. There are $16 billion worth of such contracts in the $787 billion stimulus - a tiny fraction, says Jared Bernstein. He's the chief economist for Vice President Biden who oversees the stimulus.

Mr. JARED BERNSTEIN (Chief Economist for Vice President Biden): I think the best way to think about this data is if you think of the Recovery Act as a big picture, you're looking at one corner of that picture that's being painted by these data.

NAYLOR: But Bernstein says that little corner of the big picture looks to him to be pretty significant. In fact, he says, this preliminary count exceeds the administration's projections. And it includes only direct jobs created by the contracts.

NAYLOR: Bernstein says the numbers are also significant because it's the first time the government has attempted to track jobs created by a government program with such granularity in real time. The numbers were published on the Web site recovery.gov. A much bigger jobs number is expected at the end of the month when state and local governments report how they've spent stimulus dollars. The more complete picture will show things like construction workers hired to repair roads and teachers retained by local school districts. In New Orleans today, President Obama said the stimulus program is beginning to show results.

President BARACK OBAMA: Now the Recovery Act we passed earlier this year has helped stop the bleeding. Everybody agrees on that. It's put tax cuts in the pockets of working families and small businesses. It extended unemployment insurance and health insurance to people who've been laid off. It saved or created hundreds of thousands of jobs in the private sector.

NAYLOR: But critics of the program, including House Republican leader John Boehner, says the stimulus has done little to staunch the flow of jobs.

Representative JOHN BOEHNER (Republican, Ohio): The stimulus bill is not working. The American people are asking, where are the jobs?

NAYLOR: Economist Douglas Holtz-Eakin, who was John McCain's economic advisor in last year's presidential campaign, is also skeptical of the effect of the stimulus. The president has pledged the stimulus will create or save three and a half million jobs. Holtz-Eakin says today's release of job numbers is important politically for the administration.

Mr. DOUGLAS HOLTZ-EAKIN (Economist): It matters enormously which is why we're seeing this approach of bringing out numbers as quickly as possible and as often as possible to show tangible results for the bill.

NAYLOR: If you think of the stimulus program as election night, the jobs numbers released today are very early returns from a few scattered precincts. It's too soon to judge who is ahead yet, though, like on election night, there are many who think they do know the final results. 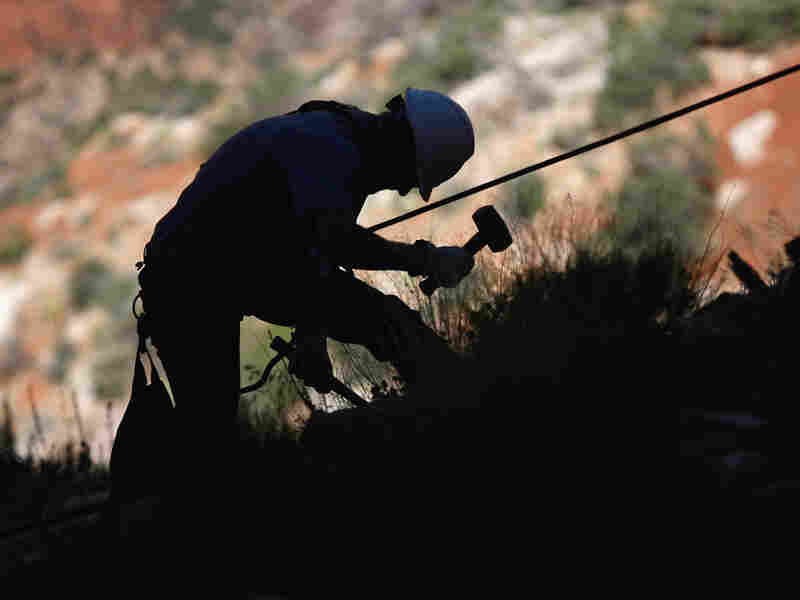 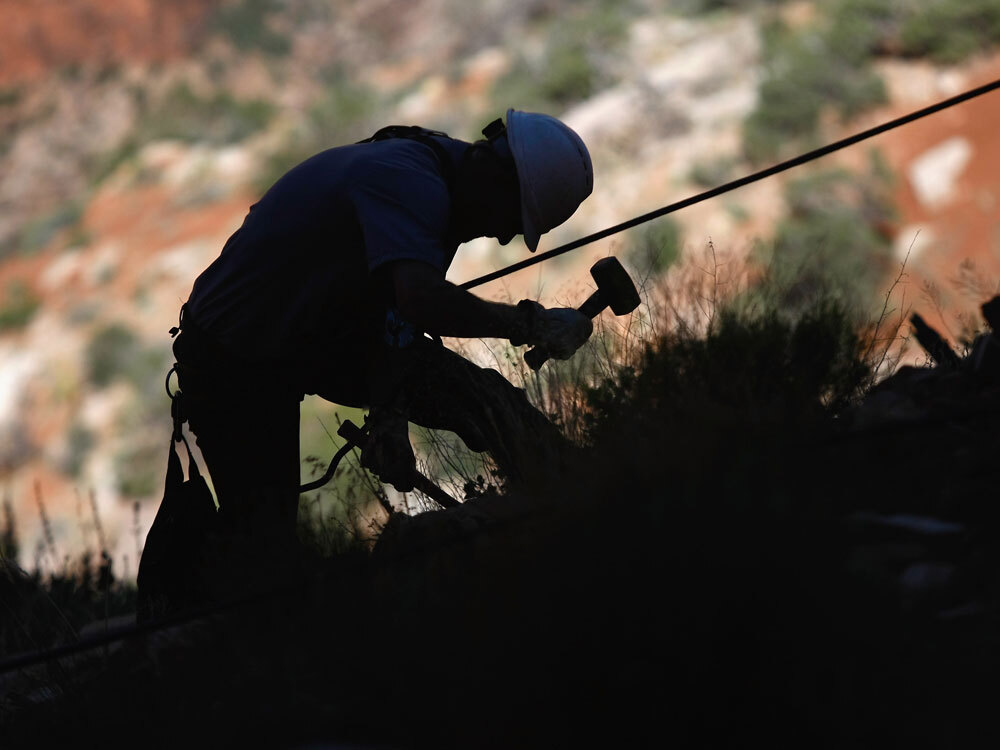 The U.S. government has offered some early data on the $787 billion stimulus program, reporting that federal contracts worth some $16 billion have saved or generated more than 30,000 private-sector jobs so far.

The number represents the first hard count of jobs tied to the stimulus, but it is preliminary and covers only a tiny portion of the overall spending. A more comprehensive count will be released on the government's Recovery.gov Web site at the end of October, though the bulk of stimulus money still has yet to be spent.

Of course, none of this will stop Democrats or Republicans from trumpeting the success or failure of the program. The stimulus has become ground zero for the political battle over jobs, which is shaping up to be one of the most important political issues for next year's congressional midterm elections.

The Obama White House quickly issued a statement Thursday from its chief economist, Jared Bernstein, saying that this direct count of jobs created by private businesses receiving federal contracts "exceeds our projections" and helps bolster its analysis that the stimulus program has created or saved about 1 million jobs in its first seven months.

"They can do whatever analysis they want, but things are not going the way they forecast," says Diana Furchtgott-Roth, who served as chief economist at the Labor Department during the Bush administration and now runs the Center for Employment Policy at the conservative Hudson Institute. "In those areas where the stimulus money is supposed to be going — infrastructure and social services — we're not seeing an effect, and we are seeing a continuing decline in employment."

House Minority Leader John Boehner (R-OH), who has hammered on job losses on a near-daily basis, echoed her sentiments on Fox News, saying, "Three million Americans have lost their jobs since this trillion-dollar stimulus bill was signed into law."

Obama officials rejected that analysis. "No one ever believed that there is any stimulus act, any conceivable legislation, that could have completely offset the deepest recession since the Great Depression," the White House's Bernstein told NPR's Brian Naylor. "This act is clearly offsetting some of the pain. That's all we've ever said it could do."

Economists on both sides of the debate agree that the actual number of jobs created by the stimulus package will likely never be known. Large swaths of stimulus money went to provide tax relief, extend unemployment benefits and provide fiscal relief to beleaguered state government budgets. These programs have largely indirect effects on employment.

Only about a third of the stimulus funds — some $275 billion — are going to grants, contracts and loans that will be tracked on Recovery.gov. The 30,000 jobs reported so far cover only direct contracts, which represent $16 billion of that total.

But these numbers are still important politically. Republicans have made the jobs issue a centerpiece of their attacks on Democrats, while the Obama administration is under pressure to demonstrate that its policies are having a real impact.

"It matters enormously, which is why we're seeing this approach of bringing out numbers as quickly as possible and as often as possible to show tangible results for the bill," says Douglas Holtz-Eakin, a former director of the Congressional Budget Office who served as the top economic adviser to Arizona Republican Sen. John McCain's presidential campaign. "I don't think this is going to win the political battle. This is a really weak number."

Meanwhile, many Democrats are worried that the piecemeal reporting of these numbers could backfire for the Obama administration, because the early figures are so small.

"This administration is bending over backwards to be transparent, but in the end, it may be political jujitsu, because it's so hard to document these various effects," says Lawrence Mishel, an economist who runs the Economic Policy Institute, a liberal think tank. "Even the people who are the winners from this don't necessarily know it."

Mishel notes that many economists, including those at Goldman Sachs, estimate that the stimulus package lifted the U.S. economy by between 2 and 3 percentage points in the second and third quarters of 2009.

Tough To Brag About What Was Averted

Still, even most Democrats acknowledge that this is a very tough political message to sell.

Some Republicans make the case that the stimulus package has actually hurt the economy overall because the extra spending is fueling even larger budget deficits. "We can conclude that the stimulus did more to harm the economy than help it," says Furchtgott-Roth. "People are concerned about these massive borrowing increases and the massive tax increases, and this makes them less willing to spend and less willing to invest."

Not all the critics go that far. Holtz-Eakin says the bill was "badly designed," but is having some sort of effect. "It's impossible to have that big a fiscal policy and have no impact on the economy," he says. "The big question has always been: Are we getting our money's worth out of this?"

While the political fight over the stimulus will continue in Washington, strategists for both parties say the nation's unemployment rate, which currently stands at 9.8 percent, is the figure to watch. Most economists expect that it will hit 10 percent in the coming weeks or months, a milestone that many observers expect will trigger another set of political attacks.

"That number is a political inflection point that is coming momentarily," says Budowsky. "Politically, when that number flashes across the screen, the political system will explode. The symbolism merges with the reality in people's lives."