Accessibility links
Balloon Boy Found Safe At Home The 6-year-old boy feared lost after a hot-air balloon he was believed to be traveling in came down has been found safe in his home. The balloon was owned by the boy's parents; it was tethered behind their house.

The 6-year-old boy feared lost after a hot-air balloon he was believed to be traveling in came down has been found safe in his home. The balloon was owned by the boy's parents; it was tethered behind their house.

In Colorado, the six-year-old boy who was thought to have floated away in an experimental balloon has been found. He is safe and alive. He was at home, hiding in a box in the attic. For an hour or so this afternoon, the country's attention, or at least cable television's attention, was fixed on the silver aircraft swinging through the sky north of Denver. When the balloon floated gently to the ground in a dirt field, there was no one inside and the frantic search began.

NPR's Jeff Brady joins us from Denver. And Jeff, a very fortunate ending to a very strange story. What do we know right now?

JEFF BRADY: Well, we know that six-year-old Falcon Heene was never up in that silver helium balloon that we were watching float through the air this afternoon on television. All along, he was safe in his own house. As you said, he was hidden in a box in the attic over the family's garage. And that good news, it came at a press conference this afternoon. Larimer County Sheriff James Alderden was holding a press conference, talking about developments in the case, people they'd interviewed, that sort of thing. And then all of a sudden, he was interrupted, somebody said he's been found. And the sheriff left the microphone. He went to get more information. He came back and he said that what's happened here was really not all that unusual.

Mr. JAMES ALDERDEN (Sheriff, Larimer County): This is not the first time when we've been involved in searching for some child, and once the child realized these people are looking for them, they hide because they're afraid they're going to get in trouble.

BRADY: At times during that press conference, Sheriff Alderden almost started giggling. I mean, he could just barely contain the glee because people around here were imagining all sorts of horrible things when that balloon landed in that freshly plowed field and the boy wasn't found.

SIEGEL: But by now - I mean, this story, it reminds me of Walter Cronkite's definition of what is non-news, that is we don't report, he said, on the catch that don't run away from home.

That's after the fact. Earlier in the day, that was hardly the case. This story was dominating all of the cable channels.

BRADY: Oh, yeah. It was a really tense situation. It started around 11 o'clock this morning, Mountain time. A spokeswoman for the Larimer County Sheriff's Department says that Falcon and his older brother were playing in the backyard of the family's home in Fort Collins. And then the brother apparently came in the house and said that Falcon had climbed inside this metallic helium balloon that had been a family science project, it was in the backyard, and then just floated away. And that, of course, sent everyone into a panic. It floated around for about two and a half hours. It was going anywhere from six to 9,000 feet up in the air, traveled about 55 miles to the southeast of Fort Collins. And then it crashed in that field, and the folks went out there, tore - hold the fabric in the balloon and no boy. He just wasn't there, and that's when people really started worrying.

SIEGEL: You mentioned the family science project. This is an unusual family.

BRADY: It is. And they're really interesting. You know, they were - last spring, they were on the ABC television show "Wife Swap," very much into science and kind of the edges of science, extraterrestrials and that sort of thing. 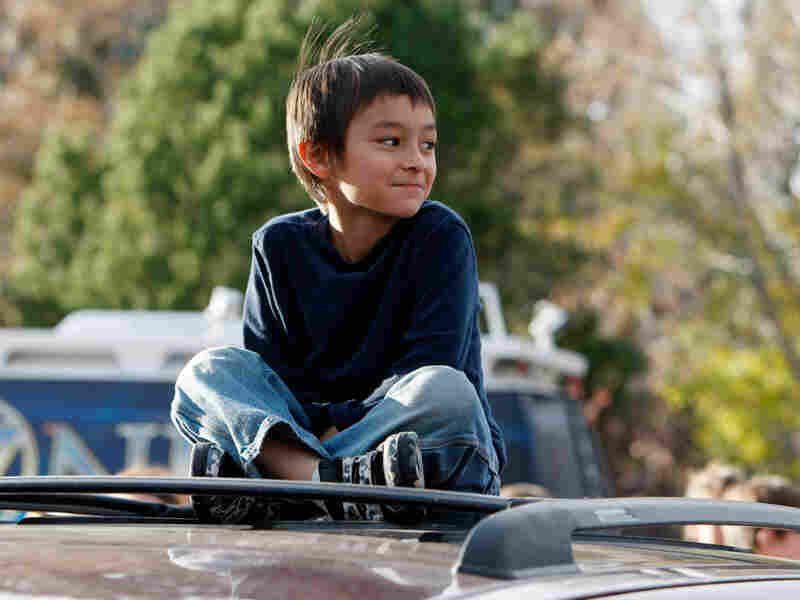 Six-year-old Falcon Heene sits on the roof of his family's van outside his home in Fort Collins, Colo. Falcon had been reported to be aboard a helium balloon over Colorado, before being discovered hiding in a box at his home. David Zalubowski/AP hide caption 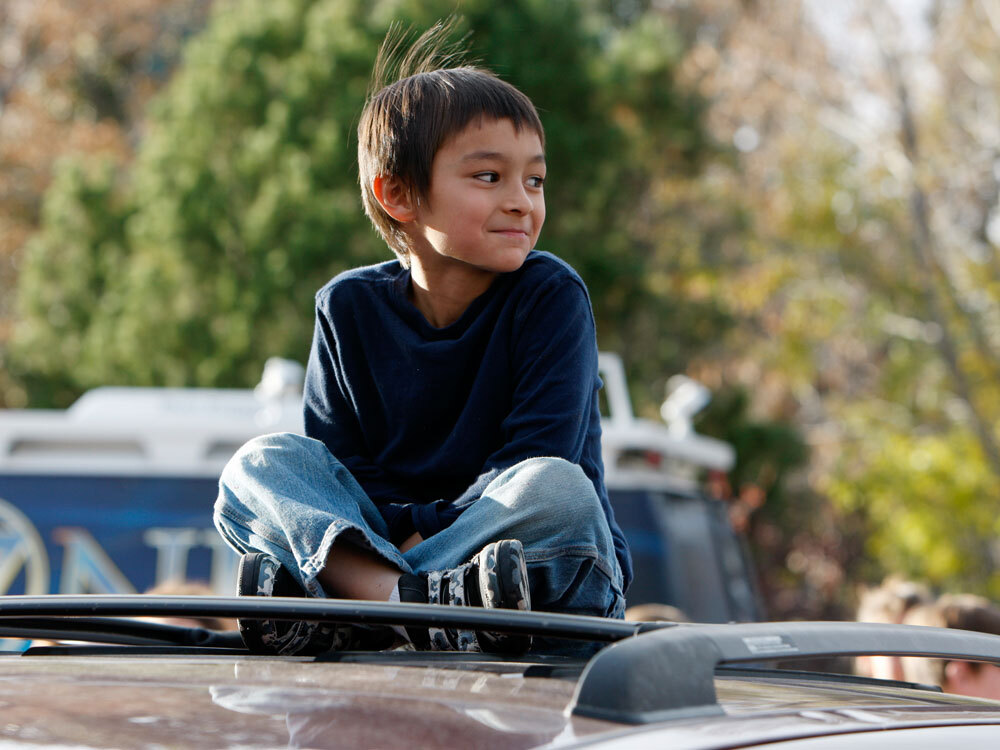 Six-year-old Falcon Heene sits on the roof of his family's van outside his home in Fort Collins, Colo. Falcon had been reported to be aboard a helium balloon over Colorado, before being discovered hiding in a box at his home.

A 6-year-old boy was found hiding in a cardboard box in his family's garage attic Thursday after being feared aboard a homemade helium balloon that hurtled 50 miles through the sky on live television.

Sheriff Jim Alderden turned to reporters during a news conference and gave a thumbs up and said, "He's at the house."

"Apparently he's been there the whole time," Alderden said.

Later, Richard Heene held his son Falcon in his arms as he spoke to reporters.

Heene said the family was working to launch the balloon Thursday morning, and he yelled at Falcon for playing in it.

The boy says he hid in the rafters of the family's garage because he was scared when his dad yelled.

The father says Falcon's brother saw his sibling inside the compartment, and the family thought he was aboard when the balloon launched. It was not immediately clear if the launch was accidental.

The family has appeared on the ABC reality show Wife Swap, but Richard Heene bristled when asked whether the incident was a publicity stunt, calling the question "horrible after the crap we just went through."

Investigators had searched the house twice, and interviewed one of Falcon's older brothers several times, Richard Heene said. He said the brother who reported that the boy floated off in the balloon was "very adamant," and the parents "were besides themselves with worry."

The boy's brother had said he saw that Falcon had crawled into a box or basket attached to the large balloon tethered behind the family home in Fort Collins before the balloon took off. The flight lasted more than two hours, spanned 50 miles, set off a frantic search and kept television and Internet audiences captivated.

Search teams scoured the area from the house in the direction that the balloon flew. The craft was airborne for more than two hours before it came to rest in Hudson, Colo., 40 miles away — and authorities found no one inside.

The family members have been local celebrities since appearing last year on the reality TV show.

"When the Heene family aren't chasing storms, they devote their time to scientific experiments that include looking for extraterrestrials and building a research-gathering flying saucer to send into the eye of the storm," the Web site for Wife Swap states. 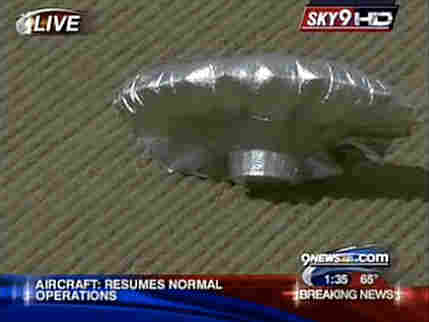 In this television image, a hot-air balloon is seen over Colorado, near Fort Collins. The balloon floated for two hours before landing. MSNBC.com hide caption

In a 2007 interview with The Denver Post, Richard Heene said he became a storm chaser after a tornado ripped off a roof where he was working as a contractor. He said he flew a plane around Hurricane Wilma's perimeter in 2005.

Pursuing bad weather was a family activity as the father sought evidence to prove his theory that rotating storms create their own magnetic fields.

The Coloradoan quoted Larimer County sheriff's spokeswoman Kathy Messick as saying that the craft had a box with a small battery compartment. Sheriff's officials and family members believed the child was in the compartment.

Television news footage of the fast-moving craft showed the balloon pitching in the winds.

The Colorado Army National Guard sent an OH-58 Kiowa helicopter and had been preparing to send a Black Hawk UH-60 to try to rescue the boy, possibly by lowering someone to the balloon. The Guard also had been working with pilots of ultralight aircraft on the possibility of putting weights on the homemade craft to weigh it down.

But the balloon landed on its own in a dirt field. Sheriff's deputies secured it to keep it in place, even tossing dirt on one edge.

Northbound departures at Denver International Airport were shut down as a precaution to prevent against a possible collision between the balloon and an airliner, said Lyle Burrington, an air traffic controller at the Federal Aviation Administration's radar center in Longmont, Colo.

Air traffic controllers warned planes in the area about the balloon, Burrington said. It helped that the day was clear, enabling pilots to see the balloon well, he said.

"We were sitting eating, out looking where they normally shoot off hot air balloons. My husband said he saw something. It went over our rooftop. Then we saw the big round balloonish thing, it was spinning," said neighbor Lisa Eklund.

"By the time I saw it, it traveled pretty fast," she said.

The story gripped the television news networks, which set aside other programming to follow the balloon and speculate on the boy's safety.

"It's got everybody freaked out," said Fox News Channel's Shepard Smith, "and why wouldn't it?"