Accessibility links
Obama Vows To Rebuild New Orleans President Obama praised the people New Orleans for not giving up after the city was ravaged by Hurricane Katrina. The comments came at a town hall meeting during Obama's first visit to the city after being elected president.

President Obama praised the people New Orleans for not giving up after the city was ravaged by Hurricane Katrina. The comments came at a town hall meeting during Obama's first visit to the city after being elected president.

Today, President Obama visited a rebuilt school in New Orleans's Lower Ninth Ward, and he took questions from frustrated residents at a town hall meeting. It was Mr. Obama's first trip to New Orleans as president. He said he is committed to the city's recovery from Hurricane Katrina.

DON GONYEA: For block after block, the ride into New Orleans' Lower Ninth Ward still contains too many reminders of Katrina and floodwaters that roared through when the levee broke. Abandoned houses with frames askew on their foundations, cement slabs shorn of their structures. But in the middle of all this stands the Martin Luther King, Jr. Charter School, where this afternoon the school band greeted the president of the United States with a song it just started learning yesterday.

(Soundbite of cheering and applause)

GONYEA: This school was the first to be rebuilt in the Lower Ninth after the storm. Today, in the combination cafeteria/auditorium, students in crisp school uniforms sat eight to a table as the president worked the room. He praised the pre-K to 10th grade school, noting that it's performing better than it did before Katrina. And he closed by asking these students to make a promise.

President BARACK OBAMA: I just got a promise - I want a promise from every single one of you that you guys are going to work hard in school each and every day. Give me that promise. You promise?

Pres. OBAMA: You give a pinky promise?

Pres. OBAMA: Pinky promise. All right, you know, that's a big promise there. So, I'm counting on you guys. I'm going to come back and check on you guys to make sure you've all been working hard, all right?

GONYEA: From the school, it was a short motorcade ride to the campus of the University of New Orleans for a town hall designed to let the president hear firsthand what people here want. It was an Obama-friendly crowd. In fact, the president had to scold them lightly for booing when he introduced Louisiana's Republican Governor Bobby Jindal.

But even in a friendly crowd, the frustrations four years after the storm were quickly evident. A man named Gabriel Bordenave stood up, asking why the Federal Emergency Management Agency, FEMA, takes so long to reimburse claims.

Mr. GABRIEL BORDENAVE: We've also been without a full service public hospital for the last four years because FEMA...

Mr. BORDENAVE: We've been without a full service hospital for the last four years because FEMA is offering $350 million less than the true damage costs incurred. I mean, I expected as much from the Bush administration, but why are we still being nickeled and dimed in our recovery?

GONYEA: Bordenave is 29 years old, a recent graduate of the Tulane Law School and unemployed. The president said he understands the frustration, then without mentioning President Bush, Mr. Obama said he has top notch people working at FEMA. But he added that these things are not going to be fixed tomorrow.

Pres. OBAMA: And my expectation is is that by the time that my term is over, you guys are going to look back and you're going to say, this was a responsive administration on health care, on housing, on education that actually made sure that the money flowed and that things got done the way were supposed to get done.

GONYEA: New Orleans voted heavily for Mr. Obama in last fall's election, and he has a tremendous amount of goodwill here. But the past four years have been long and the frustration continues to grow. 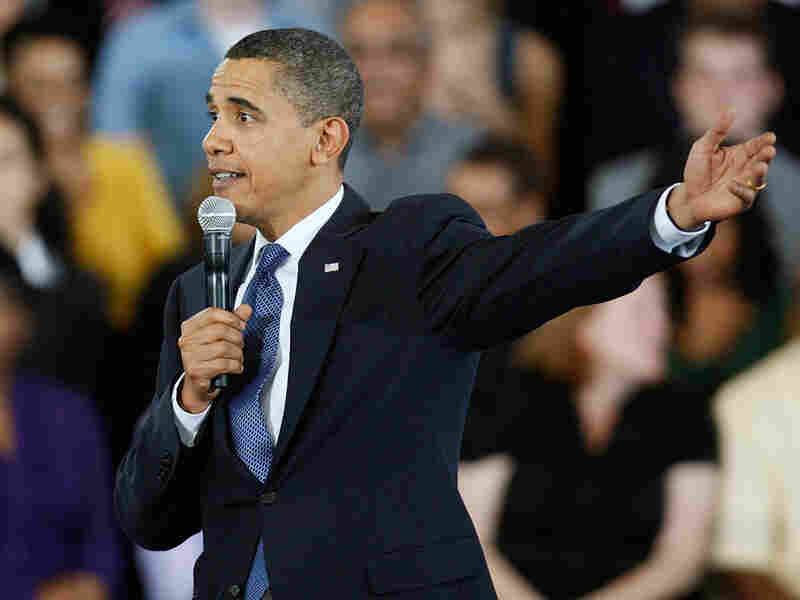 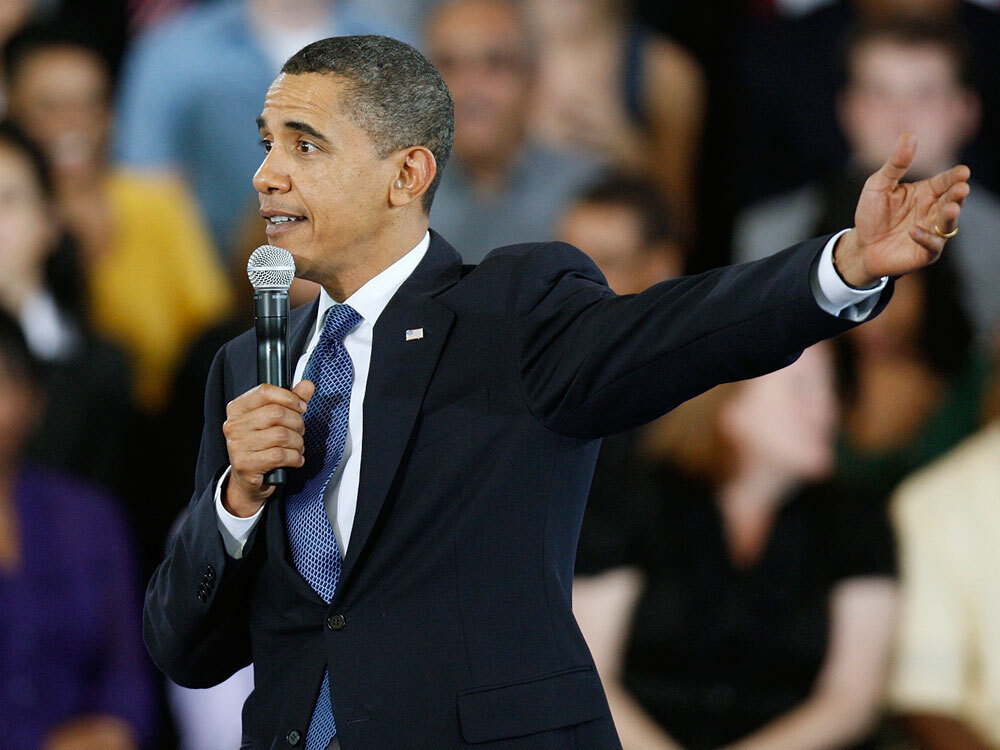 President Obama participates in a town hall meeting Thursday at the University of New Orleans.

More than four years after Hurricane Katrina devastated a huge swath of the U.S. Gulf Coast, President Obama on Thursday admitted there's still a lot of work to do before the recovery effort can be declared a success.

"We will keep on working. We will not forget about the Gulf Coast," he told an enthusiastic crowd gathered for a town hall meeting at the University of New Orleans.

During his first visit to New Orleans since becoming president, Obama said repairs are yet to be made on many roads, sewers, hospitals, homes and schools throughout the city and the region. But he promised his administration will not forget about the region and announced a new working group that will coordinate restoration, preparedness and response efforts.

"I know since a lot of these problems have been going on since Katrina, people understandably feel impatient," Obama said. "On the other hand, a lot of these things are not going to be fixed tomorrow."

Hurricane Katrina killed about 1,600 people in Louisiana and Mississippi. Damage from the storm has been estimated at about $40 billion. Four years after the storm, many areas are still scarred by vacant homes and boarded-up businesses. Many people are still living in temporary housing, and buildings are still awaiting demolition. 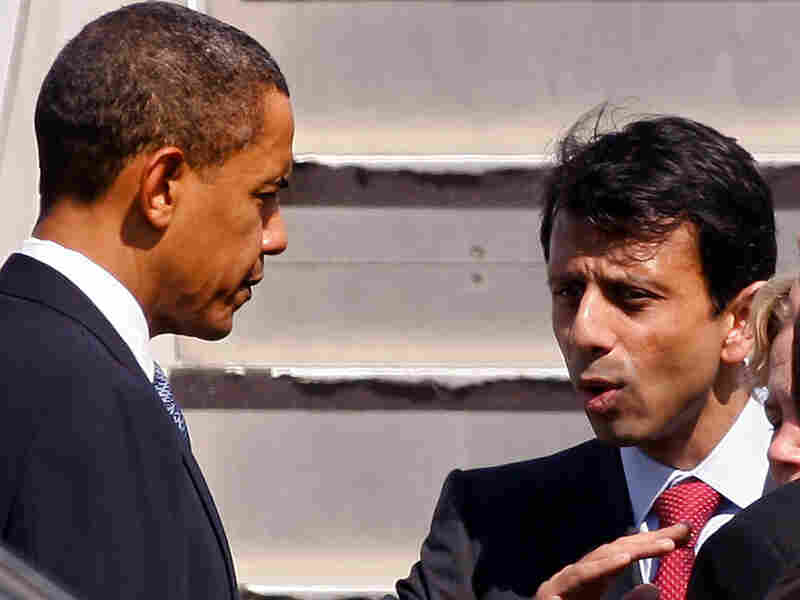 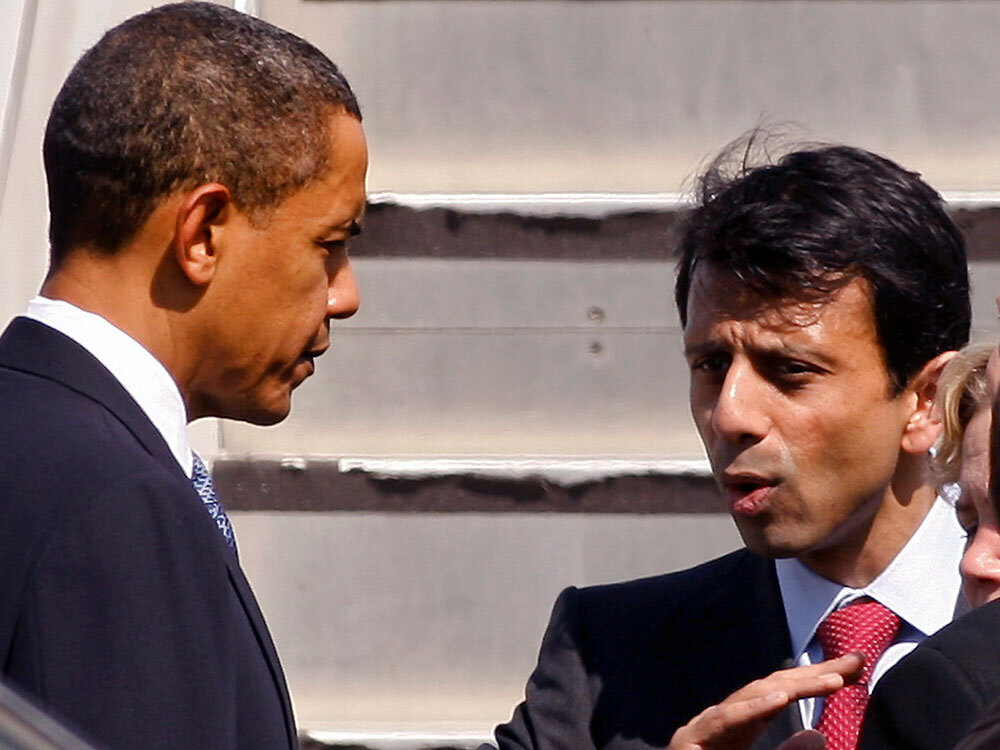 In New Orleans alone, some 60,000 properties are still abandoned or in need of major repairs. The Army Corps of Engineers is only one-third of the way through a $15 billion project to strengthen the levees.

The president began his visit to the Crescent City at Dr. Martin Luther King Jr. Charter School for Science and Technology — the only school to reopen in the city's Lower Ninth Ward since floodwaters ravaged the neighborhood.

In brief remarks, Obama asked the kids to "pinkie promise" that they would work hard in school every day. "I want all of you to know that the most important thing you can do for yourselves and for your community and for your country is to work hard in school — and to treat each other with respect and treat yourself with respect," the president said.

The president was only scheduled to be in the city for 3 hours and 45 minutes before flying to San Francisco for a Democratic National Committee fundraising dinner later this evening. The brief trip drew criticism from some residents, who complained that he wasn't paying enough attention to the area's problems.

Two Republicans criticized the president for not touring the battered wetlands, and a Mississippi official said he was disappointed Obama was skipping the state entirely.

Louisiana Sen. Mary Landrieu, a Democrat, said members of the Cabinet and other senior advisers will remain in the area for a longer visit.

"Although I'm disappointed, as many are, that the trip won't be longer, I'm encouraged that he's coming with members of his Cabinet to visit very significant sites in the area," Landrieu said in a YouTube post.

The White House had scheduled the town hall so Obama could field residents' concerns. However, of the half-dozen questions he took, only two were directly related to the storm. Others touched on Social Security, health care, climate, education and even, from a fourth-grade boy, the president's approval ratings. "Why does everyone hate you?" the boy asked.

While Obama was frequently cheered inside the event, roughly 150 demonstrators protested outside, some criticizing his health care plan.

"I'm a small-business owner, and the things he has proposed are going to collapse my business," said Tom Clement, 63, who runs a small landscaping business in Baton Rouge.

With material from NPR staff, The Associated Press and member station WWNO in New Orleans