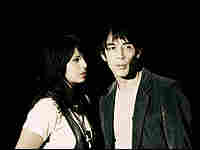 It's not easy to interpret and define strange, ambiguous lyrics that could really be about anything. Sometimes, the audience's interpretations mirror the musicians', but it's just as likely that they read into it what they want to see. Sometimes a cigar is just a cigar, and all that.

Handsome Furs doesn't make this task any easier. The duo, composed of Wolf Parade's Dan Boeckner and his fiancee Alexei Perry, specializes in sparse, repetitive pop melodies coupled with baffling, poetic words. "Hearts of Iron," a song about six golden eggs destroyed by a single iron one, becomes more mysterious as it progresses over an even, hymn-like tune.

Boeckner predicts the emotional frigidity that comes with age and experience — "When did we grow old in hearts of iron?" — but ultimately, the question is one of alienation. Would we give up dominance of others in order to be like them? Would we trade our distinctiveness for a chance at normalcy? Of course, maybe it's just about six golden eggs destroyed by one of iron.