Accessibility links
Future Unlikely For Kyoto Climate Treaty Despite dissent from developing countries, the U.S. and Europe seem to be abandoning the idea of extending or revising the Kyoto climate treaty when it expires in 2012. Instead they will form a new treaty, but some doubt it will be ready in December, when diplomats meet in Copenhagen. The news leaves many countries in the developing world frustrated. 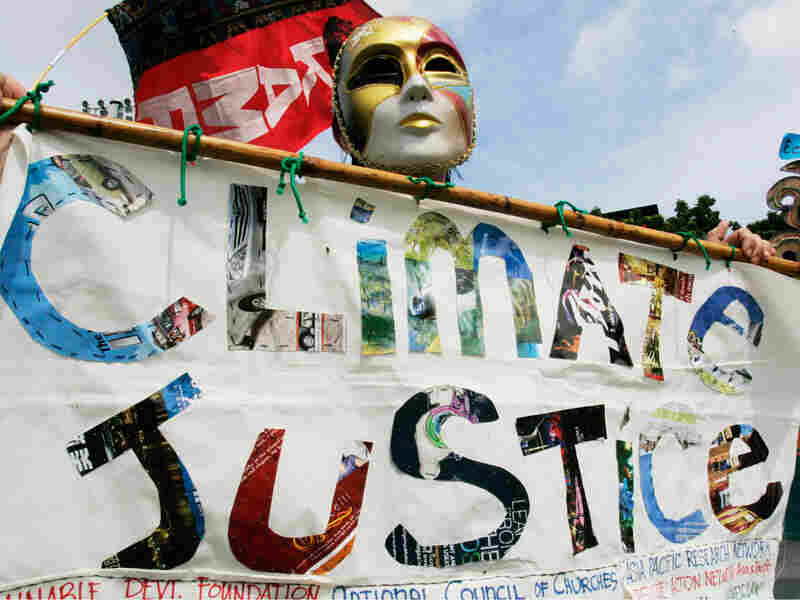 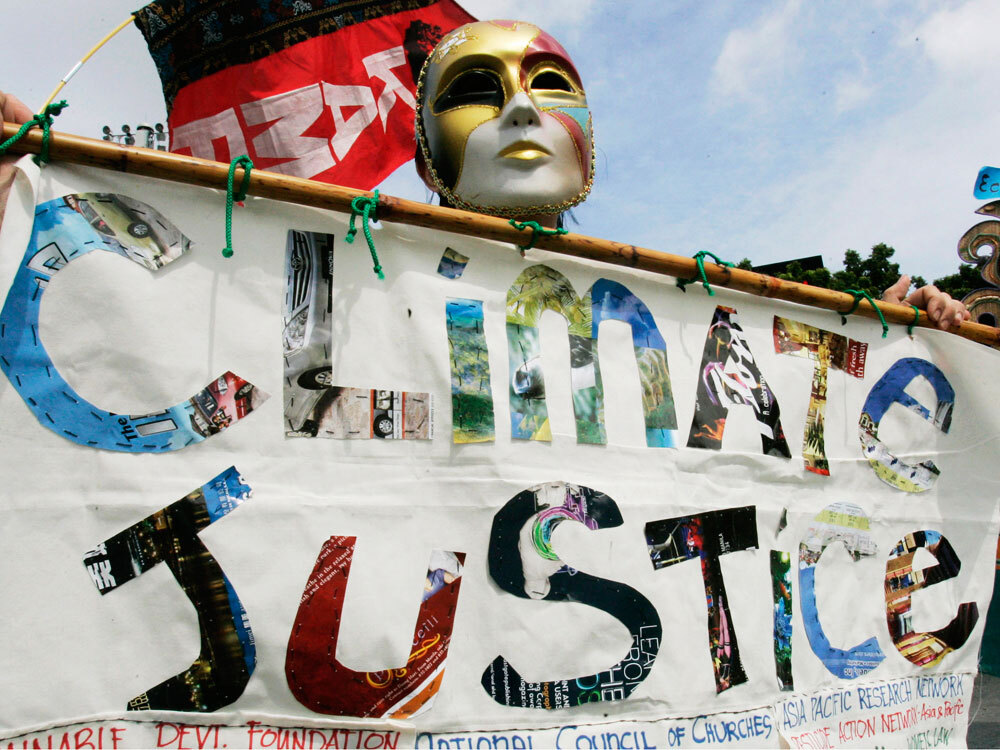 Masked activists hold banners during a protest Oct. 2 outside the U.N. regional office in Bangkok, where delegates held talks on climate change.

The landmark Kyoto climate treaty, a global warming pact negotiated 12 years ago, is unlikely to live on after its 2012 end date.

During climate talks in Bangkok last week it became apparent that after the treaty's initial term ends, a new treaty will almost certainly take its place.

Diplomats from the U.S. and 15 other major economies will meet on Sunday in London to talk about a new global warming agreement.

The news leaves many countries in the developing world frustrated. The key to the Kyoto pact was that many industrialized countries had promised to reach emissions reduction targets on a specific timetable.

'Throwing Away Your Baby'

Lumumba Di-Aping, a Sudanese diplomat who was speaking on behalf of 130 developing nations, expressed the developing world's unhappiness with this turn of events.

"We have witnessed one developed country after the other making a pronouncement, that literally amounts to discarding the Kyoto Protocol. It's like throwing away your baby and saying, 'No, I will have a new one,' " he said.

Di-Aping said that it could take yet another 15 years to reach a new agreement if nations of the world decided to start from scratch on a mechanism to limit climate emissions.

European diplomats in Bangkok tried to couch their change of heart about the Kyoto treaty more delicately, but Michael Levi at the Council on Foreign Relations says the facts are stark. "Kyoto is essentially dead after 2012," said Levi.

Disagreements about the Kyoto treaty have created global deadlock on a climate deal.

The United States never ratified the agreement because it doesn't require any action from the developing world, including China, the world's largest emitter. The Bush administration considered that a fatal flaw. And so does the Obama White House.

"The notion that we should have an agreement which looks explicitly and exclusively at a handful of countries, doesn't seem right. The whole purpose of this is to move the world to a better place, not to move one set of countries down that road," said Jonathan Pershing, a top U.S. negotiator.

According to Levi, this American resistance to the Kyoto treaty created a huge political schism. Europe and much of the developing world complained that the United States was dragging its heels on climate change, while other shortcomings of Kyoto simmered quietly in the background.

"There was widespread agreement for quite a while that the Kyoto agreement would not work, but no one wanted to be the one who said that," said Levi.

Europe Backs Away From Kyoto

Finally, at the climate meeting in Bangkok, European diplomats suggested that they would let the treaty expire.

In an interview with NPR this week, European Commission Vice President Margot Wallstrom put it in practical terms. It's been a logistical nightmare for the Kyoto signatories to try to update that treaty while at the same time trying to negotiate an additional treaty that the United States would agree to, she said.

"If they could be merged I think we would all be glad. We want to have it in one negotiation track," said Wallstrom.

The huge question, though, is what would a new treaty look like?

Alden Meyer from the Union of Concerned Scientists says one option on the table would have each country simply pledge what it intends to do, rather than negotiate collective targets and timetables.

"It's different than a political negotiation, where you work something out and then you sort of have to hold hands and jump together. Of course, the flaw [in Kyoto was that] the U.S. wasn't one of the handholders," said Meyer.

Meyer says the worry with that option is that countries won't pledge enough action if each one gets to decide for itself how hard to try.

And Levi says that while a whole new treaty won't come together overnight, a readjusted Kyoto deal would not have either. "Will it take time to negotiate? Yes. Will it mean we don't have a deal by this December? Yes, but we weren't going to have a deal under Kyoto this December, either," he said.

December is when diplomats meeting in Copenhagen were originally supposed to have come up with a new climate agreement.