Accessibility links
Do Soap Operas Boost Womens Rights? Economist Says Yes A pervasive technology is reshaping the world. And it's not Facebook, or Twitter, or anything else on the Web — it's television, says economist Charles Kenny. From Brazil to India, commercial television makes life better and helps strengthen civil rights, Kenny says. 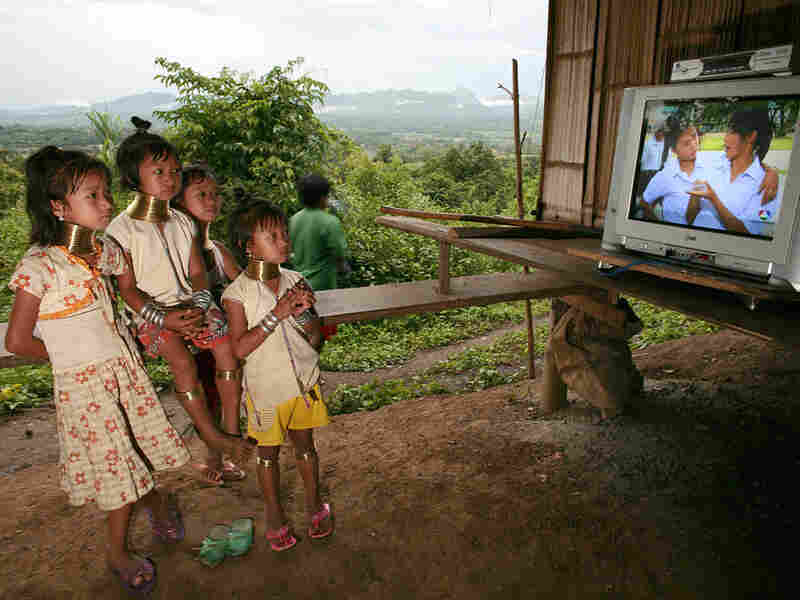 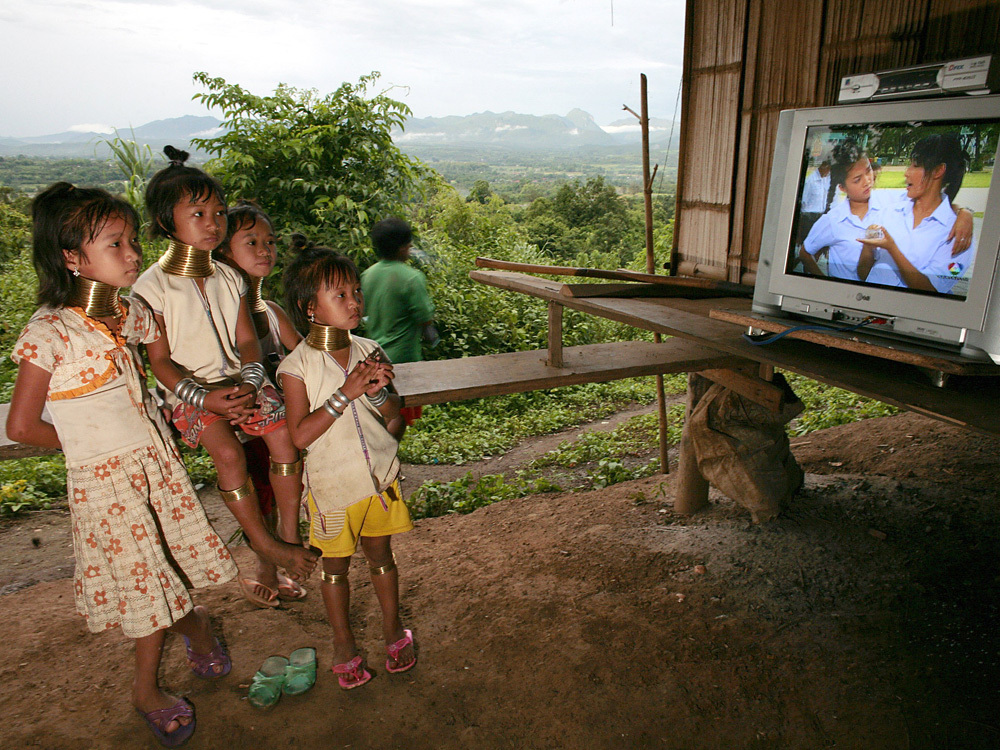 Young girls of the Long Neck Padaung hill tribe watch television in a small village in Chiang Dao, Thailand. By custom, girls in the tribe wear brass rings around their necks, beginning at age 5.

It's not just that television sets are popping up in living rooms and cafes from New Delhi to the most remote locations in Saudi Arabia, it's that now those TVs tend to come with many more choices through satellite and cable.

Citing research by scholars Robert Jensen and Emily Oster, Kenny says that a village getting satellite or cable TV "goes along with higher girls' school enrollment rates and increased female autonomy. Within two years of getting cable or satellite, between 45 and 70 percent of the difference between urban and rural areas on these measures disappears."

Take India for example; one-half of Indian households have a TV and of those two-thirds have access to cable or satellite. More choices often mean access to many popular American shows.

Topping the list of most popular television shows: Baywatch. Some episodes have been viewed by more than 1 billion people. And Kenny says even the lifeguard drama does have some redeeming social value.

The Greatest Shows On Earth

Eurodata TV surveyed 1.6 billion viewers in 66 countries to learn what they watched in 2008:

Top Soap Opera: The Bold and the Beautiful

Runners-up: Marina and The Young and the Restless

"A lot of the moral messages in Baywatch are quite positive," Kenny tells Steve Inskeep. "Do the right thing is a fairly constant endpoint for a Baywatch show."

Kenny sees this as a positive influence on viewers' lives.

One genre in particular has had a lot of influence over the lives of those living in developing countries: the soap opera.

The influence of TV extends further, according to Kenny, when the names of television stars become popular names for children. There's evidence to support the idea that strong female characters help women in these developing countries begin to challenge the power relations between men and women.

The story of television isn't a purely positive one. Just as there are detractors in the United States, so too have there been challenges to the merits of spending time in front of the TV abroad. There have been fatwas issued against watching TV in India, and in an extreme example one Muslim cleric in Saudi Arabia suggested that it would be acceptable to kill television executives.

Kenny sees the backlash as evidence that television can be a powerful tool.

While some authoritarian governments may try to limit the messages sent to citizens, Kenny observes that many times television has a unique position of power. One of the stories he finds most compelling about the power of TV in the area of governance takes place in Peru. In the 1990s the head of Peru's secret police bribed pretty much anyone — judges, congressmen, newspapers.

"He could sort of pay off all the congressmen he needed to for about $300,000 a month," Kenny says. "It took him $3 million a month to pay off the television stations."

So at least, according to Kenny, television makes it more expensive to run a country corruptly.

'Revolution In A Box'