Accessibility links
To Cut Costs, Airlines Send Repairs Abroad Recent malfunctions affecting US Airways planes raise questions about a controversial and growing practice at most U.S. airlines: The industry is sending almost 1 out of every 5 planes needing overhaul or repair to developing countries, from Central America to Asia.

Shortly before sunrise on Jan. 23, 2009, passengers on US Airways Flight 518, who were flying from Omaha to Phoenix, were startled by a terrifying shriek.

The pressure seal around the main cabin door was failing, and that shriek was the sound of air leaking through. The plane diverted to Denver. Everybody was safe.

But that and other recent malfunctions affecting US Airways planes, which NPR is reporting for the first time, raise questions about a controversial and growing practice at most U.S. airlines: The industry is sending 1 of every 5 planes to developing countries, from Central America to Asia, when the planes need to be overhauled and repaired. 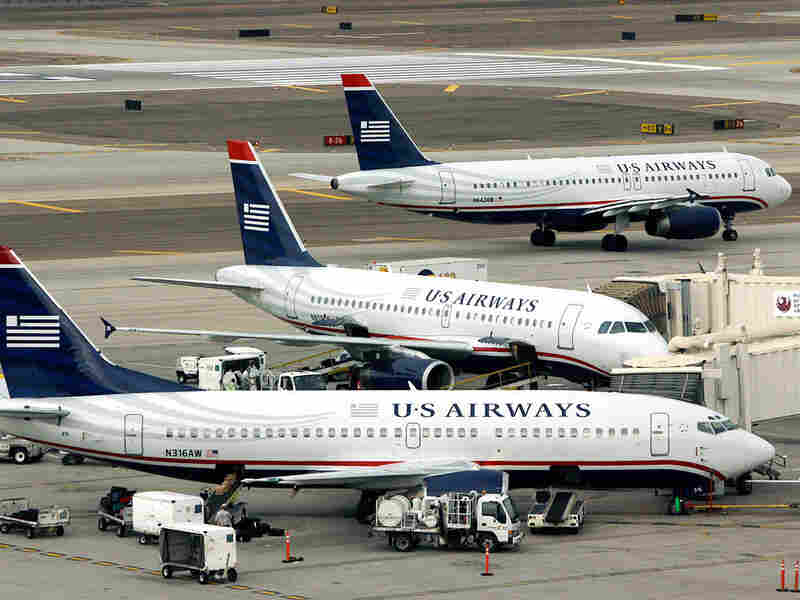 US Airways planes prepare to taxi for takeoff at Sky Harbor Airport in Phoenix in 2007. US Airways is one of many airlines that have farmed out some maintenance to repair shops in developing countries. Ross D. Franklin/AP hide caption 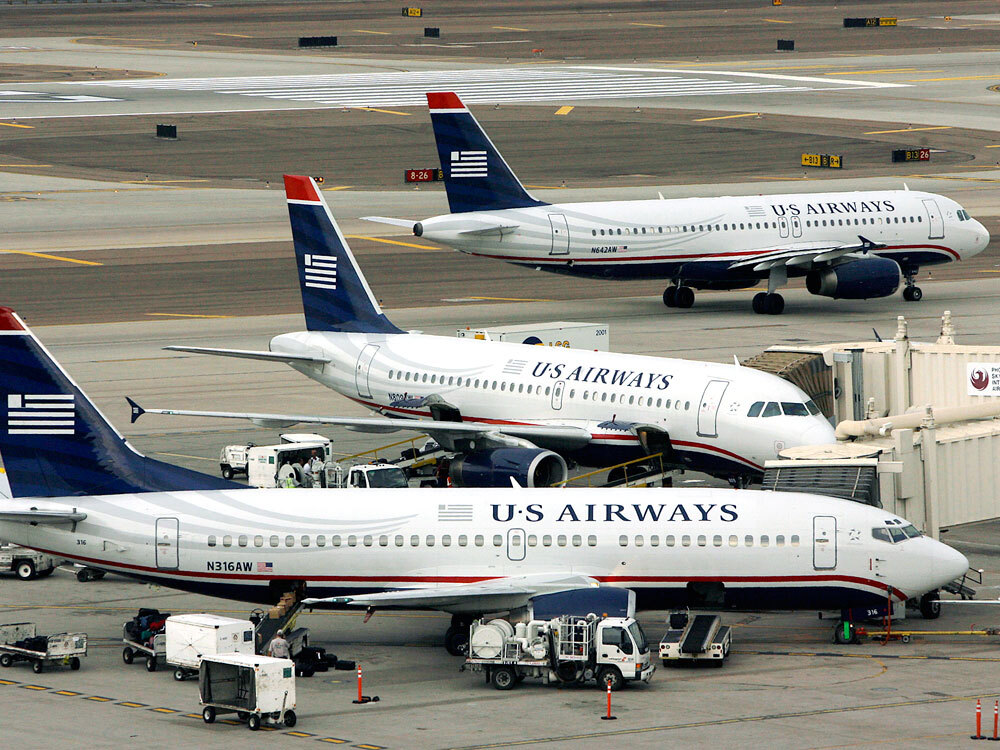 US Airways planes prepare to taxi for takeoff at Sky Harbor Airport in Phoenix in 2007. US Airways is one of many airlines that have farmed out some maintenance to repair shops in developing countries.

In the weeks before the door seal started to fail, US Airways had sent that Boeing 737 to be overhauled at Aeroman, a repair company in El Salvador. And mechanics installed a key part on the door — a "snubber" — backward.

Mechanics at Aeroman first told NPR about the incident. David Seymour, a senior vice president at US Airways, later confirmed the details. He says the plane made the unscheduled landing merely as "a precautionary" measure — but he acknowledges that the Federal Aviation Administration issued violations against both Aeroman and US Airways for lapses in maintenance and oversight.

"US Airways takes safety as our top priority," Seymour says. "It's first and foremost in anything that we do, and we never sacrifice safety in any way, shape or form."

The globalization of airline maintenance is a remarkable reversal. Until just a few years ago, America's airlines maintained most of their own planes. The FAA requires airlines to overhaul every plane roughly every two years or less, and small armies of mostly union mechanics at the airlines did the work.

But that was before 2002 — when US Airways filed for bankruptcy, American Airlines slashed flights, and other airlines teetered at the brink. Since then, airlines have been trying to survive by cutting back on any expenses they can control — including the little bags of peanuts.

One of the biggest areas airlines can cut costs is maintenance. Consider this: If an airline fixes its own planes in the U.S., it spends up to $100 per hour for every union mechanic, including overhead and other expenses, according to industry analysts. The airline spends roughly half as much at an independent, nonunion shop in America. And it spends only a third as much in a developing country, such as El Salvador.

Since the airline crisis hit seven years ago, the statistics have flip-flopped: The industry is now sending most of its planes to be overhauled and fixed at private repair shops both in the U.S. and overseas. And roughly 20 percent of planes are going to facilities in developing countries, according to industry surveys.

The Mechanics Of Repair

Industry analysts say there are roughly 700 FAA-approved repair companies in other countries — including repair shops in Argentina, Costa Rica, Ethiopia, Kenya, China and Indonesia. The Aeroman company in El Salvador is becoming one of the more popular, drawing business from US Airways, JetBlue, Frontier, Southwest and other U.S. carriers.

The way the system works, the airlines fly empty planes needing an overhaul to Aeroman's hangars at the international airport near the capital, San Salvador. Salvadoran mechanics strip the inside of the plane down to the bare metal. They fix cracks and rust and bad wiring. Then they put everything back together, and the plane is flown back to the U.S.

When people hear that U.S. airlines are getting their planes fixed in developing countries, they often raise their eyebrows and ask, "Should I worry?"

Industry analysts say there's no reason for concern because Aeroman and other foreign companies are doing a great job. "Over the last 10 years, we've seen a significant growth" in the use of foreign repair companies, says Kevin Michaels, director of consulting firm AeroStrategy. "At the same time, air travel has become significantly safer. If this were compromising safety, I suspect we would have seen it by now." The last time a U.S. airliner crashed because of maintenance mistakes was in 2003 — and that plane had been maintained in the U.S.

This 2008 report by the inspector general at the Department of Transportation warned that FAA and industry inspectors are not monitoring airplane maintenance work properly.

Peggy Gilligan, the FAA's associate administrator for aviation safety, says one reason there hasn't been a crash since then is "that there are lots of eyes looking at work that's done on aircraft, and lots of checks and balances to see that the work is being completed properly." When a U.S. airline sends planes to a repair shop, whether in the U.S. or another country, the work is supposed to be supervised by FAA-certified mechanics, and then checked by inspectors with the repair company, the airline and the FAA.

But the inspector general at the Department of Transportation has investigated those checks and balances and has repeatedly warned over the past six years that FAA and industry inspectors are not monitoring the work the way they should. His reports are written in the dry bureaucratic language of Washington, D.C., but they add up to a scathing critique of the way the FAA monitors the foreign repair industry — or fails to. For instance, his 2008 report declared:

"FAA still does not have comprehensive data on how much and where outsourced maintenance is performed."

Translation: The FAA does not require airlines to report exactly where they send their aircraft for which kinds of repairs. So, FAA inspectors are not sure which of the roughly 700 foreign repair shops they should inspect.

"There is no standard for all FAA offices regarding initial inspector visits, which can cause safety issues to go unchecked."

Translation: The FAA's inspectors didn't even show up at some foreign repair stations to monitor their work for as long as three to five years.

"Problems existed [at foreign repair stations that the inspector general investigated], such as untrained mechanics, lack of required tools and unsafe storage of aircraft parts."

FAA officials told the inspector general they would correct those problems. "He has made recommendations that FAA improve its oversight, and we take those recommendations seriously," says Gilligan of the FAA.

But so far, FAA officials have not put those changes in place.

"These findings are very, very disturbing," says John Goglia, a former presidential appointee on the National Transportation Safety Board. "We don't know what's going on in those facilities [foreign repair companies]. If we're not monitoring them properly, how do we know it's safe?"

Goglia says the fact that there have been so few crashes in recent years masks a troubling trend that the public can't see as airlines have been slashing costs.

"The margin of safety is getting thinner," he says. "The absence of an accident doesn't mean you're safe. We should be monitoring and doing our job before there's an accident, not after."

In Part 2: Mechanics at Aeroman and US Airways tell NPR about troubling practices on the shop floor — and about the case of the crossed wires.