Accessibility links
Endangered Sea Turtles Return To Mexico's Beaches Prized for their meat, shells, skins and eggs, Olive Ridley turtles were harvested to the brink of extinction in Mexico during the 1970s and '80s. But thanks to a government ban on their slaughter, about 1 million of the sea turtles now nest on three beaches in Oaxaca. 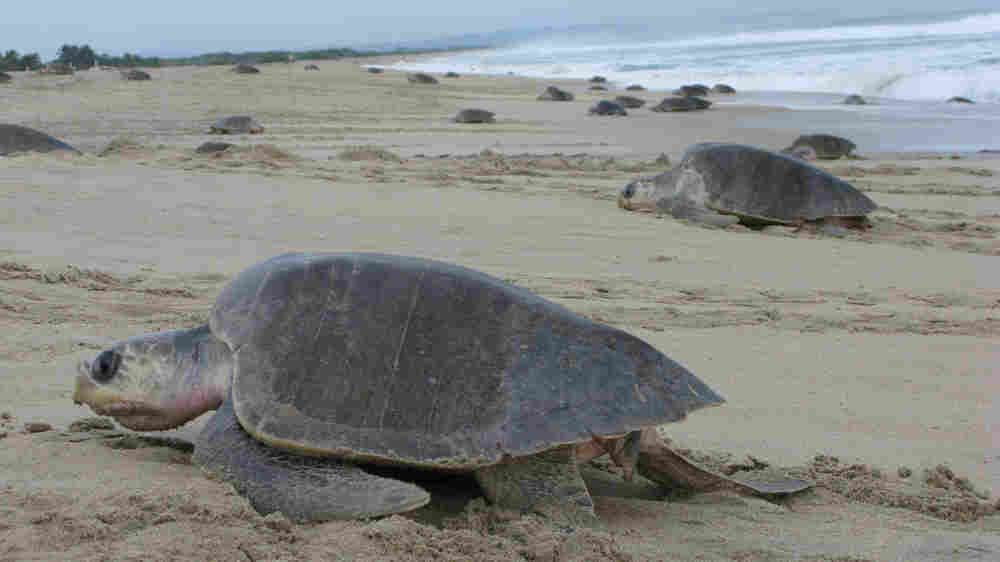 Olive Ridley turtles come ashore to lay their eggs on La Escobilla beach in Oaxaca, Mexico, one of the most important nesting grounds in the world for the creatures. Before the Mexican government instituted a ban on their slaughter, Olive Ridley turtles were harvested nearly to extinction. Jason Beaubien/NPR hide caption 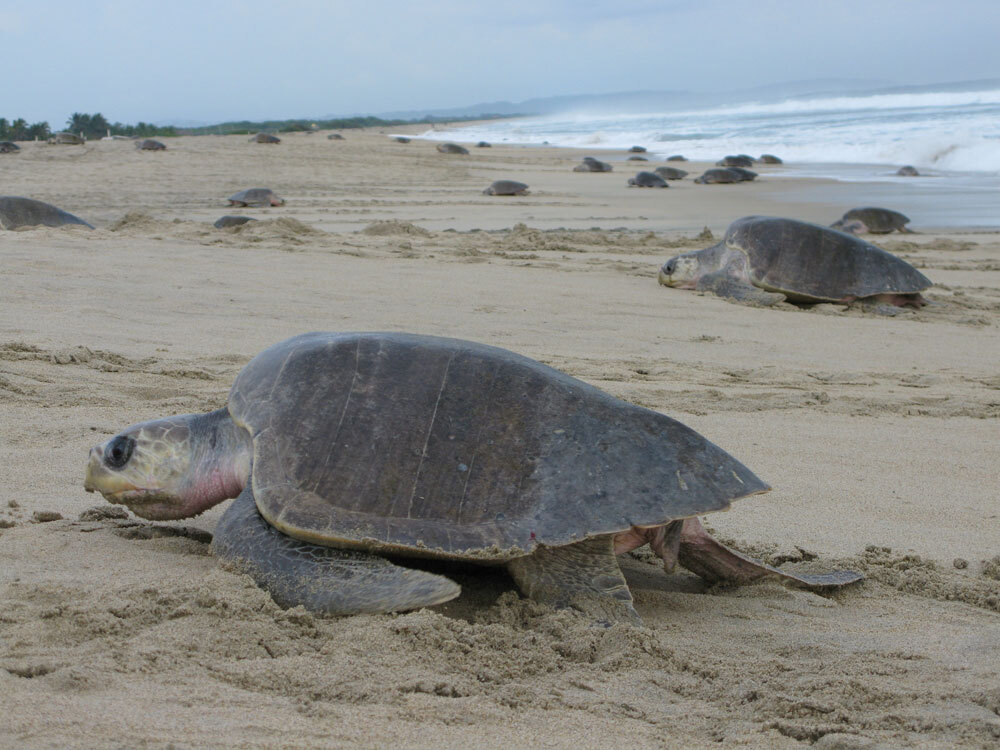 Olive Ridley turtles come ashore to lay their eggs on La Escobilla beach in Oaxaca, Mexico, one of the most important nesting grounds in the world for the creatures. Before the Mexican government instituted a ban on their slaughter, Olive Ridley turtles were harvested nearly to extinction.

Mexico has deployed its navy to several beaches in the Pacific Coast state of Oaxaca. Its mission isn't to fight the drug cartels or protect European tourists, but to guard the nesting grounds of an endangered sea turtle.

In the 1970s and '80s, Olive Ridley turtles were harvested to the brink of extinction. But the Mexican government has orchestrated a remarkable comeback for the sea creatures.

This time of year, along a solitary sandy beach in southern Oaxaca, turtles bob in the waves just offshore. And then based on some signal — exactly what isn't entirely clear to scientists — the females come ashore by the thousands to lay their eggs.

On a recent day, Erika Peralta Buendia, a biologist with the Mexican government, stands amid a mass of female turtles at La Escobilla, one of the most important nesting grounds in the world for the Olive Ridley turtle.

"Practically the whole beach is full," she says, "It's 3 or 4 kilometers full of turtles, one right next to another."

The females are gray and weigh roughly 100 pounds. Each shell is about the size of a tire on a Honda Civic.

Prior to 1990, this beach was a slaughter ground for the Olive Ridley.

Sea turtles can't retract their heads into their shells. People would bludgeon them to death and then haul them to Mexico's largest turtle processing plant just up the coast.

Prior to 1950, an estimated 10 million Olive Ridley turtles nested each year on Mexico's southern coast. By 1988 — shortly before Mexico banned their harvest — the population had dropped to just 40,000.

In 1990, Mexico declared a total ban on killing sea turtles, Peralta says, outlawing the harvest of turtles and turtle eggs.

At the time, turtle byproducts — the meat, the shells, the skins, the eggs — were the second-largest industry for this impoverished region, after shrimp.

This part of Mexico still doesn't have land-line phones and only recently got electricity. The slaughterhouse used to employ 200 people at the height of the season. But while it was offering jobs, it was decimating the sea turtle population.

The Mexican government shut down the plant in 1990 and replaced it with an aquarium, the Mexican Turtle Center.

Marta Harfush, a biologist at the center, says during the peak of the season, which is taking place now, 100,000 turtles come ashore in Oaxaca in a span of three or four days.

She says Olive Ridley turtles are extremely vulnerable for several reasons. They only nest in significant numbers on a few select beaches in Mexico, Costa Rica and India. The turtles are on land only when they are born and when they lay eggs — consequently, they are sitting ducks on the beach. Vultures pluck the soft-shelled babies out of the sand soon after they hatch, while a type of beetle has been destroying their eggshells.

Despite the legal protections for the turtle population, people still covet their meat and eggs. Harfush says turtle fat is sold as a cure for the common cold. Turtle meat is still a traditional meal at some weddings. And the eggs are supposed to heighten sexual powers.

"They are used in bars and restaurants, not for food, but as a complement to the beer; they say they're aphrodisiac. That's why many people sell them," she says.

Harfush says the temperature on the beach can also dramatically affect the turtle population. If the sand during the third week of incubation is 86 degrees Fahrenheit, half the hatchlings will be female and half will be male.

The U.S. National Marine Fisheries Service still categorizes the Olive Ridley turtles that breed in the Pacific as "endangered."