Accessibility links
Veil Ban At Islamic School In Egypt Fuels Debate In Egypt, a top cleric has barred the wearing of the full-face veil, or niqab, in classrooms and dormitories at one of the top centers of Sunni Islamic teaching. The ban is an example of Egypt's efforts to push back against the growth of conservative Islam across the region. 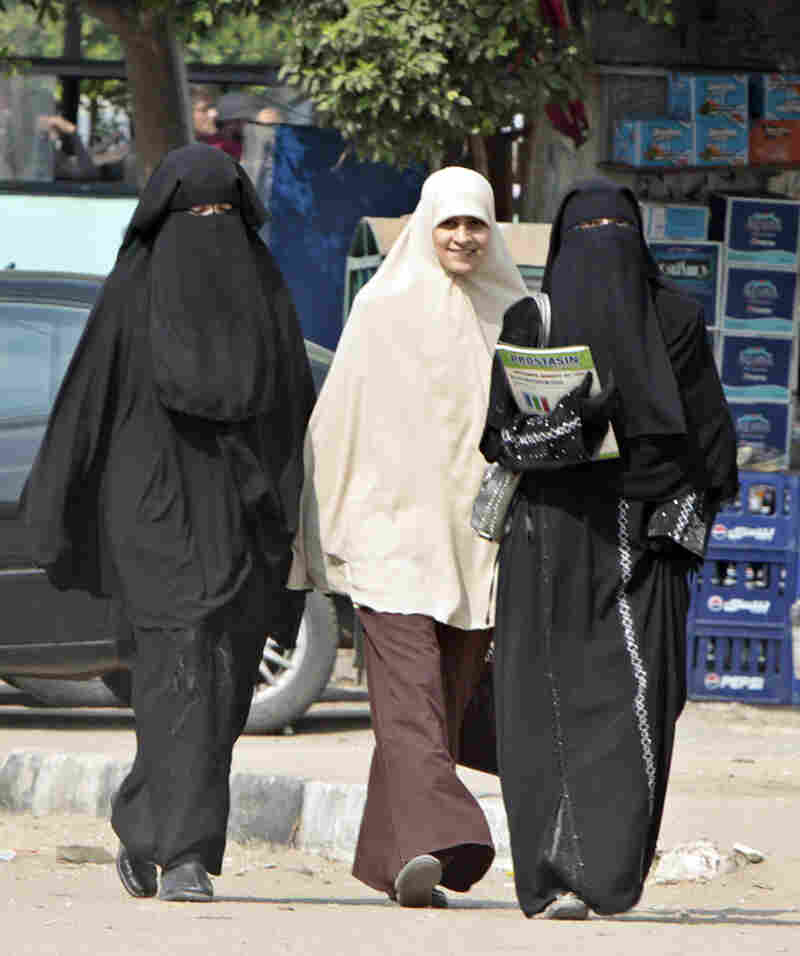 Egyptian students wearing the face-covering veil known as the niqab walk with another student in Cairo. Last week, Egypt's top Islamic cleric barred students from wearing face veils in the classrooms and dormitories of Sunni Islam's premier institute of learning, Al-Azhar. The decision appears to be part of a government campaign to crack down on overt manifestations of ultraconservative Islam in Egypt. Amr Nabil/AP hide caption 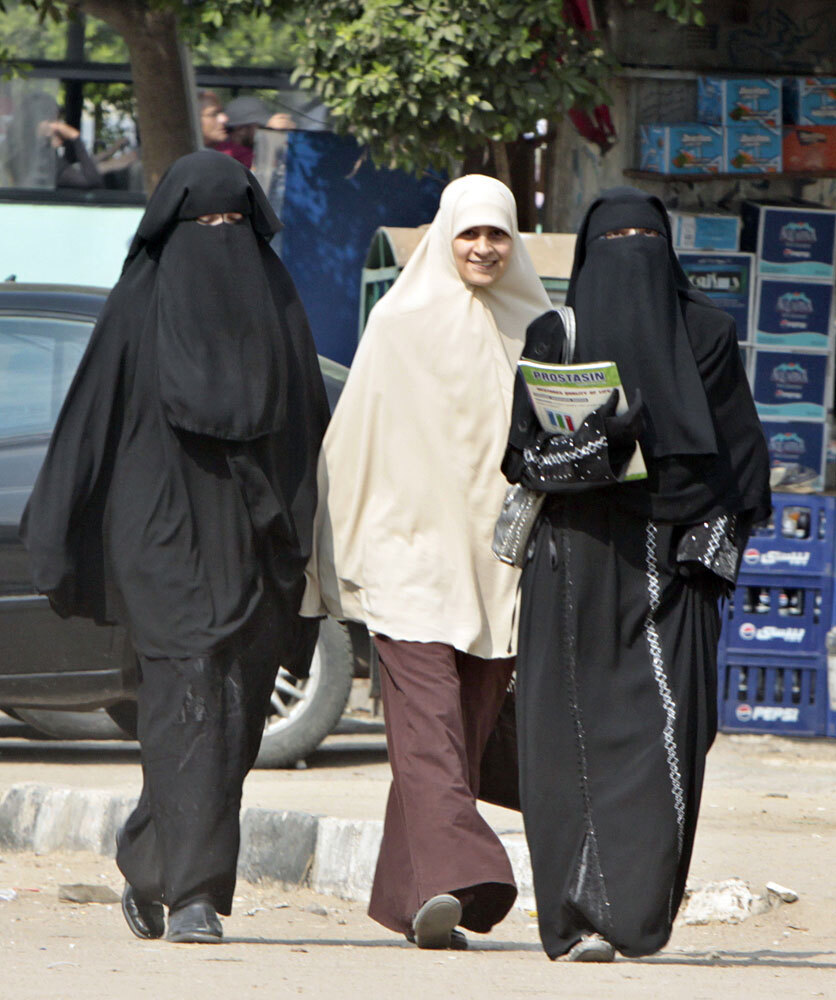 Egyptian students wearing the face-covering veil known as the niqab walk with another student in Cairo. Last week, Egypt's top Islamic cleric barred students from wearing face veils in the classrooms and dormitories of Sunni Islam's premier institute of learning, Al-Azhar. The decision appears to be part of a government campaign to crack down on overt manifestations of ultraconservative Islam in Egypt.

In Egypt, the senior cleric at one of the Muslim world's pre-eminent centers of Sunni Islamic teaching has banned female students and teachers from wearing the niqab — the full-face veil — in classrooms and dormitories.

The Grand Sheik of Al-Azhar, Mohammed Sayyed Tantawi, says the niqab has nothing to do with Islam and is a sign of radicalism. Other Egyptian universities have taken similar positions, prompting civil rights activists to complain that the ban violates students' rights.

Many Islamic scholars believe that full-face coverings are not a religious requirement, but the modern expression of tribal customs and traditions that predate Islam. Such coverings are common in conservative states such as Saudi Arabia and Yemen, though not in Egypt.

But the sheik's pronouncement is seen as a reminder of the country's difficult position as it tries to push back against the growth of conservative Islam across the region.

Student Hela Omar, 19, is petite, slender, dark-eyed and otherwise indescribable because of her loose robes and the cloth covering her face from the bridge of her nose down below her jaw. She understands that the niqab is not an Egyptian tradition, but she doesn't understand why Tantawi and some government ministers seem to see it as a sign of allegiance to radical Islam.

"Anything that covers the body is something that people should respect. I've lived in other countries like Yemen, and the niqab is normal there. So I don't understand why people here think it's extremist, or think it's too Islamist to wear. I just think it's a matter of modesty," Omar says.

Tantawi's announcement of the ban was clouded by reports that he spoke harshly to a young niqab-wearing student, embarrassing her in front of her middle-school class.

He denied speaking abusively to the girl and later clarified that he doesn't object to the niqab in public settings where men and women mix. He said the ban applies only to Al-Azhar's classrooms and dorms, which are already segregated.

Dia Rashwan, an analyst with the government-run Al-Ahram Center for Political and Strategic Studies, says this is part of an ongoing struggle to define Egypt's cultural references. In the early 20th century, he says, the debate was over the hijab, the headscarf that is now quite common in Egypt, but was controversial at the time.

Rashwan says for Al-Azhar as an institution, it's a matter of defending its interpretation of Islam as the correct one. But for the health of the society, he sees it as a question of accommodating Egypt's various cultures without letting any one culture dominate.

The niqab debate has produced strange bedfellows, with civil rights advocates standing with the Islamists in defense of a woman's right to cover her face.

Hossam Bahgat at the Egyptian Initiative for Personal Rights said the ban further discriminates against women who are already struggling to succeed in a heavily patriarchal society.

Editor Rania al-Malky wrote in the English-language Daily News Egypt that rejecting the ban on the grounds that it deprives women of opportunity would only perpetuate what she calls "this cycle of psychological and social violence in the name of religion."

On the streets of Cairo, a number of niqab wearers hoped that solutions might yet be found. They said they would be happy to lift their veils so a guard could identify them at the gate, and also during exam time so that their teachers could be sure who was taking the test.

But if history is any guide, this debate is about much larger issues — such as where the Middle East's most populous country is heading, socially and culturally. It's a debate not likely to end anytime soon.