Accessibility links
A Bitter Rift Divides Atheists There's a schism in the world of atheism. New atheists — led by Richard Dawkins — insist that religion is stupid and dangerous. The old guard may not believe in God but are willing to work with religious liberals on shared goals. 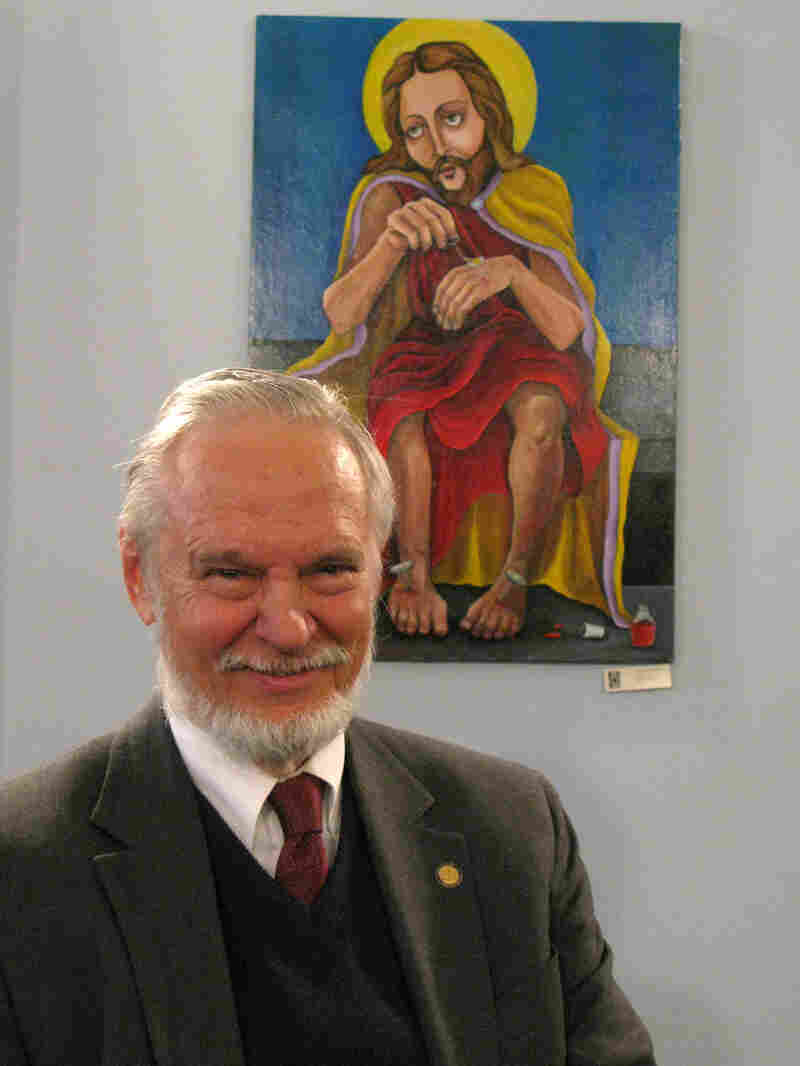 Stuart Jordan, science adviser to the Center For Inquiry, with the painting Jesus Does His Nails by Dana Ellyn, on display at the Center for Inquiry. Jordan says he would prefer that atheists and secularists not be associated with such artwork. Dianna Douglas/NPR hide caption 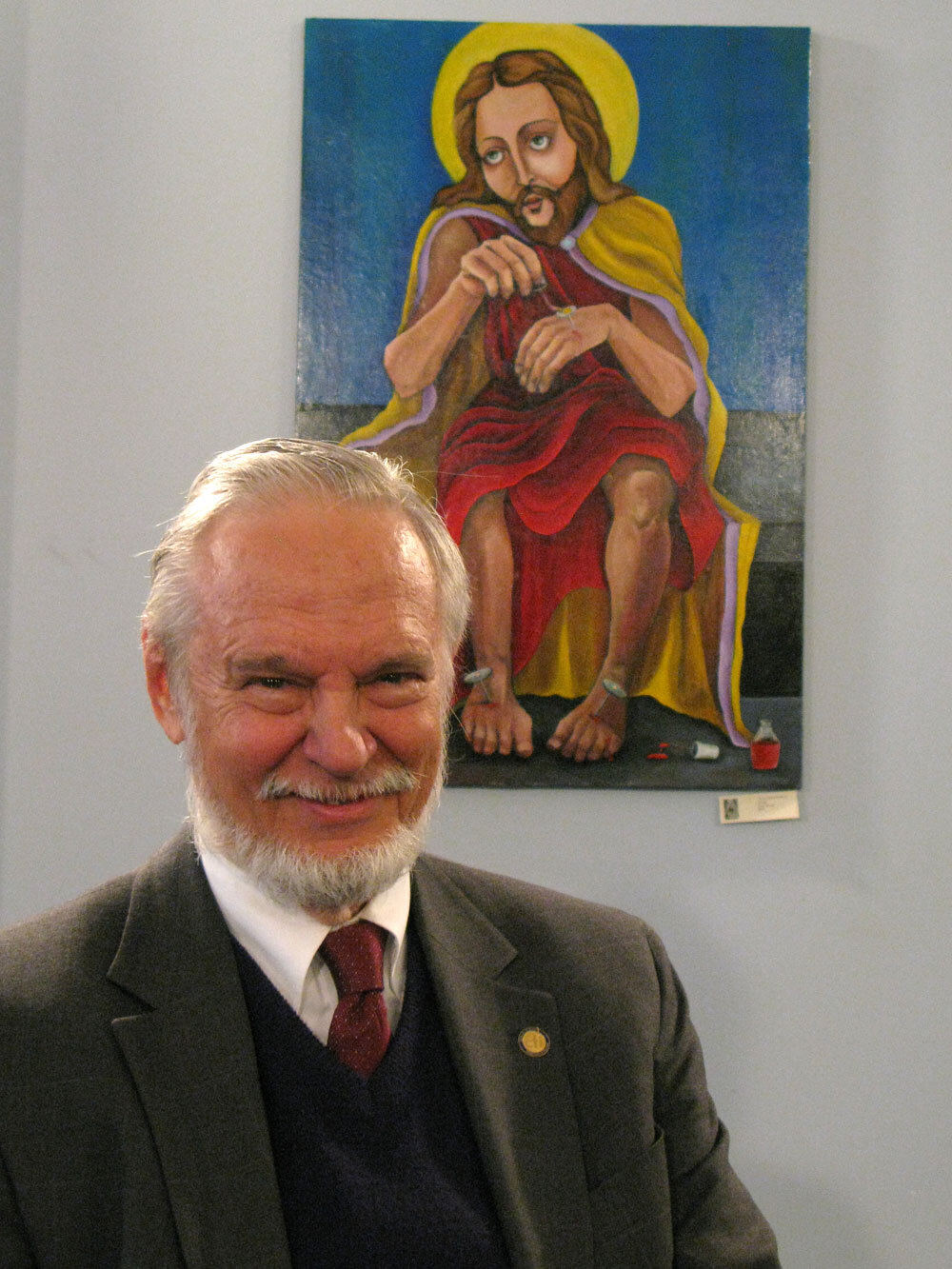 Stuart Jordan, science adviser to the Center For Inquiry, with the painting Jesus Does His Nails by Dana Ellyn, on display at the Center for Inquiry. Jordan says he would prefer that atheists and secularists not be associated with such artwork.

Last month, atheists marked Blasphemy Day at gatherings around the world, and celebrated the freedom to denigrate and insult religion.

Some offered to trade pornography for Bibles. Others de-baptized people with hair dryers. And in Washington, D.C., an art exhibit opened that shows, among other paintings, one entitled Divine Wine, where Jesus, on the cross, has blood flowing from his wound into a wine bottle.

Another, Jesus Paints His Nails, shows an effeminate Jesus after the crucifixion, applying polish to the nails that attach his hands to the cross.

Jordan says the exhibit created a firestorm from offended believers, and he can understand why. But, he says, the controversy over this exhibit goes way beyond Blasphemy Day. It's about the future of the atheist movement — and whether to adopt the "new atheist" approach — a more aggressive, often belittling posture toward religious believers.

Some call it a schism.

"It's really a national debate among people with a secular orientation about how far do we want to go in promoting a secular society through emphasizing the 'new atheism,' " Jordan says. "And some are very much for it, and some are opposed to it on the grounds that they feel this is largely a religious country, and if it's pushed the wrong way, this is going to insult many of the religious people who should be shown respect even if we don't agree with them on all issues."

Jordan is a volunteer at the center and therefore could speak his mind. But interviews for this story with others associated with the Washington, D.C., office were canceled — a curious development for a group that promotes free speech.

Ronald Lindsay, who heads the Center for Inquiry, based in Amherst, N.Y., says he didn't know why the interviews were cancelled. As for the art exhibit and other Blasphemy Day events the group promoted:

"What we wanted were thoughtful, incisive and concise critiques of religion," he says. "We were not trying to insult believers."

But others are perfectly happy to. New atheists like Oxford biologist Richard Dawkins and journalist Christopher Hitchens are selling millions of books and drawing people by the thousands to their call for an uncompromising atheism.

For example, Hitchens, a columnist for Vanity Fair and author of the book God Is Not Great, told a capacity crowd at the University of Toronto, "I think religion should be treated with ridicule, hatred and contempt, and I claim that right." His words were greeted with hoots of approval.

Religion is "sinister, dangerous and ridiculous," Hitchens tells NPR, because it can prompt people to fly airplanes into buildings, and it promotes ignorance. Hitchens sees no reason to sugarcoat his position.

"If I said to a Protestant or Quaker or Muslim, 'Hey, at least I respect your belief,' I would be telling a lie," Hitchens says.

Asked why he feels compelled to be so blunt, he responds: "I believe it's more honest, more brave, more courageous simply to state your own position."

The more outrageous the message the better, says PZ Myers, who writes an influential blog that calls, among other things, for the end of religion. On Blasphemy Day, Myers drove a rusty nail through a consecrated Communion wafer and posted a photo on his Web site.

Myers, who teaches biology at the University of Minnesota, Morris, says he received about 15,000 hate e-mails. He says one reason he favors the provocative approach is that it works, especially for the next generation of atheists.

Paul Kurtz founded the Center for Inquiry three decades ago to offer a positive alternative to religion. He has built alliances with religious groups over issues such as climate change and opposing creationism in the public schools. Kurtz says he was ousted in a "palace coup" last year — and he worries the new atheists will set the movement back.

"I consider them atheist fundamentalists," he says. "They're anti-religious, and they're mean-spirited, unfortunately. Now, they're very good atheists and very dedicated people who do not believe in God. But you have this aggressive and militant phase of atheism, and that does more damage than good."

He hopes this new approach will fizzle.

"Merely to critically attack religious beliefs is not sufficient. It leaves a vacuum. What are you for? We know what you're against, but what do you want to defend?"

The new atheists counter that they believe in reason, science and freedom from religious myth. And, as Lindsay, who replaced Kurtz, puts it: "We take the high road, the low road, country roads, interstates, highways, byways, — whatever it takes to reach people."