Accessibility links
Babe's And Ricky's: The Real Deal Blues If you're in Los Angeles and you love the blues, Monday nights ought to find you far away from the glitz of the ersatz blues venues on the Sunset Strip. You're likely to be waiting to get into Babe's and Ricky's Inn, a little club in the Leimert Park section of the city that serves as the last link to Los Angeles' storied musical heyday.

If you're in Los Angeles and you love the blues, Monday nights ought to find you far away from the glitz of the ersatz blues venues on the Sunset Strip. You're likely waiting to get into Babe's and Ricky's Inn, a little club in the Leimert Park section of the city that serves as the last link to Los Angeles' storied musical heyday. 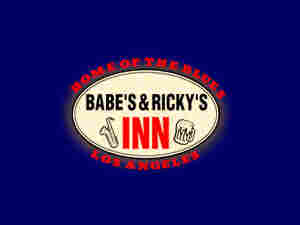 Courtesy of Babe's And Ricky's

You'd be standing in line with people who don't care about buying souvenir T-shirts, seeing Hollywood celebrities (although many have been known to drop in) or asking whether there's a VIP section. (There most emphatically is not.) You'll hear voices from lots of different countries — Sweden, England, Japan, Brazil. And you all will have come for one thing: authentic American blues.

They came because they appreciated the fact that Mama Laura, as everyone came to call her, venerated the blues. She knew them from her hometown of Vicksburg, Miss., and was happy to give them a home in the little club she named after her son and nephew.

Gross hung on as long as she could, but she ultimately ended up leaving Central Avenue when her rent was tripled overnight. Jonathan Hodges was a lot younger than Gross and way whiter, but they were joined by their passion for the blues. Hodges, a Hollywood prop master who played from time to time at Gross' club, got together with some of Gross' regulars and moved her things into storage, and they began looking for a space to begin again.

They found it in Leimert Park, the new nucleus of L.A.'s now-smaller black community. Hodges remembers the date exactly: "We reopened in Aug. 15, 1997, which was a Friday." Babe's and Ricky's has been drawing people ever since.

"Monday night is definitely the night to be here," Deacon Jones says.

Jones is considered a virtuoso on the Hammond B-3 organ- — he's played with everyone from John Lee Hooker to Eric Clapton, and he's seen Mama Laura politely but firmly put young improvisers in their place when they wander too far away from the blues.

"Babe and Ricky's is the real deal blues." Jones says. "And Laura's No. 1 rule was, she didn't care how good you were; if you weren't playing the blues, she would have you excuse yourself on off the stage. I've seen her do it many, many times."

Jones says that even as a musician was basking in applause, "She'd holler out, 'Y'all sound real good, but this is a blues club. So if y'all don't know any blues, c'mon off the stage. Now.' "

"A lot of guys who are touring around the country and the world got their start here and got instruction from Laura, and the ones who listened are doing really well," Hodges says.

Gross died earlier this month, after a brief illness. Hodges says the House That Laura Built will continue: "Our intention is to keep going and build on Laura's legacy."

So this Monday night, find your way over to Leimert Park. You'll stand in line, sniffing the heady perfume of the soul-food buffet that comes with your $10 cover charge. You'll hand your Hamilton to pretty Loretta, who now sits in Mama Laura's old seat by the door. You'll wave at Joe the bartender.

And you'll settle into your seat near the bandstand, confident that no matter what happens in the outside world, in this one place, at least, there will never be anything but the blues.