Accessibility links
Upstart Digital Television Maker Leads Industry In the past few years, California-based Vizio has grown from a company of three people into one of the largest sellers of digital televisions in the U.S. The company's "value pricing" has sent shock waves through the industry, and companies such as Sony and Samsung have cut their prices to compete with the upstart. 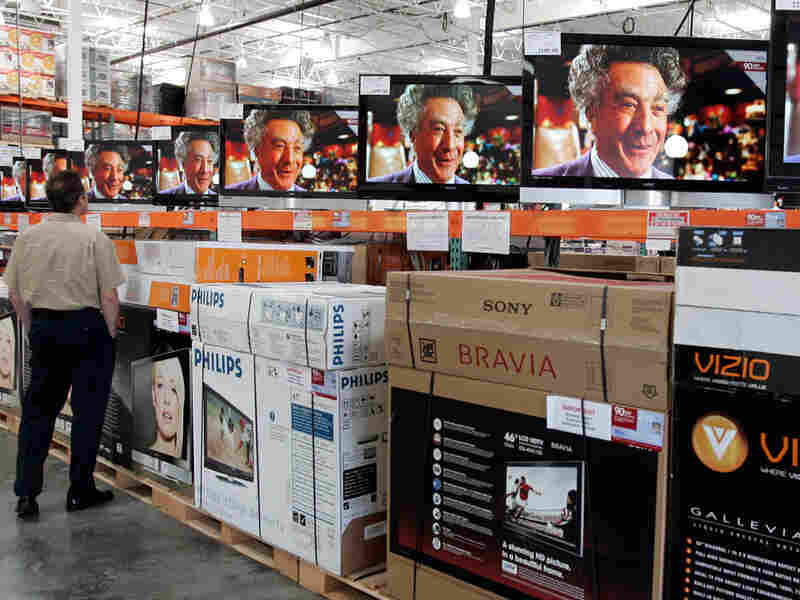 Actor Dustin Hoffman is shown in a movie advertisement on televisions at a Costco store in San Jose, Calif., in 2007. Upstart TV maker Vizio has become a leader in this field. Paul Sakuma/AP hide caption 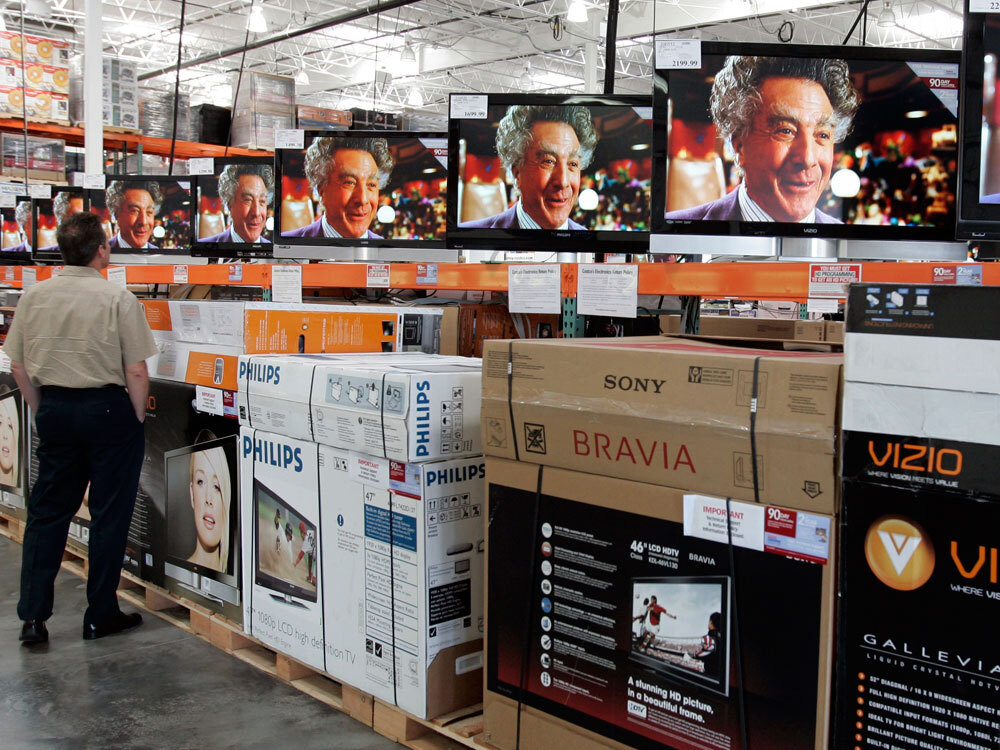 Actor Dustin Hoffman is shown in a movie advertisement on televisions at a Costco store in San Jose, Calif., in 2007. Upstart TV maker Vizio has become a leader in this field.

Americans will buy about 35 million televisions this year, and Japan's Sony and Korea's Samsung are two of the biggest brand names.

But there's a California company sharing the top of the list with those industry leaders: Vizio.

Like many other American brands, the Orange County-based upstart doesn't manufacture anything in the U.S. Vizio made its mark as the low-priced value brand. It was at the right place at the right time, with the right idea.

Back in 2001, Vizio's three founders had a company that was making computer monitors, but co-founder Ken Lowe says the trio was looking for the next big thing,

"We thought that flat panel TVs looked really nice," says Lowe, who heads the company's engineering department. "But a really nice plasma TV cost about $8,000, and we thought, 'That's too rich for us.' "

However, Lowe and his partners thought, "We know how these things are made; they shouldn't cost that much."

The three worked their connections in the manufacturing world in Asia and created a 42-inch plasma TV that retailed for less than half the going price.

"At that time, we called ourselves a 'disruptive company,' because our price was so much lower than the competition," Lowe says.

Vizio's TVs sold briskly, and the company was soon producing well-priced products under its own name. Today it's among the top three sellers of TVs to U.S. consumers.

Vizio had the foresight to jump into the market just as the industry was converting from old technology to digital TVs. That meant that all the manufacturers were, to some degree at least, starting from square one. But while the established firms had large legacy costs, Vizio did not.

"We're like outsourcing on steroids, right," Lowe says. "It's myself here and a few other engineers. That's it for Vizio."

Lowe says only about 130 people work at the company headquarters, and a couple of dozen more work in another U.S. facility. All the manufacturing, along with the detailed design work, is done primarily in Asia.

"I specify exactly what picture performance I require, what inputs I require. I get these teams of engineers to sit down and work out all the circuitry to make that happen," Lowe says. "I like to say I've got a thousand engineers working for me, but they're all paid by another company ... in Asia."

He chuckles a bit as he says this, but he adds that building TVs in the U.S. would require a huge capital investment — and right now, at least, Vizio isn't about to make it.

The company buys the flat panels — the major component in TVs — directly from the suppliers, sometimes the very same suppliers that make panels for more expensive brands. Because Vizio sells so many TVs, it has the clout to negotiate good prices on the parts it buys.

There's yet another factor in the value price equation.

From the very beginning, Vizio sold its TVs through Costco and at Sam's Club, Walmart and, more recently, Target. Those retailers generally work on smaller profit margins, and that's helped to keep Vizio's prices low.

Industry analyst Gagnon says there's no question that Vizio has been instrumental in driving down the cost of digital TVs.

"Vizio made a lot of big companies blink," he says.

At first, the well-established leaders didn't pay that much attention to the new company. But Gagnon says that as Vizio began selling lots of TVs with premium features and low prices, the industry giants had to respond. They did, cutting their prices and putting new pressure on Vizio.