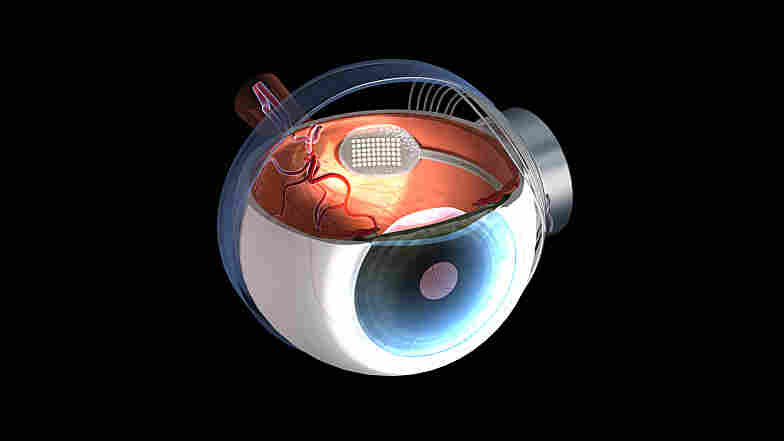 This retinal prosthesis has been implanted in the eyes of 32 patients. The device receives wireless data from the camera which it then translates into electronic signals that are sent to the brain, restoring sight. Courtesy Second Sight Medical Products, Inc. hide caption

Stem cells and electronics can help restore vision to people who've been blinded by retinal diseases, scientists reported in Chicago at Neuroscience 2009, the annual meeting of the Society for Neuroscience.

Diseases of the retina cause blindness by damaging the cells that line the back of the eye, where images of the world are normally transformed into nerve impulses that go to the brain.

But Second Sight is hoping to change that. The company has developed an experimental bionic eye that has been tried in more than 30 patients with macular degeneration or retinitis pigmentosa.

This animation shows how the retinal device translates a visual image taken by the camera on the patient's glasses into electrical impulses that the brain understands as sight.

Each patient wears a pair of glasses that incorporates a video camera, Mech says. The video signal from the camera is sent to an implant on the eye itself, which in turns communicates with an array of electrodes attached to the patient's retina.

And those electrodes do what the old retina can't anymore: send electrical signals to the brain that allow sight.

Mech says it usually takes patients' brains a little while to make sense of the new signals.

"They learn to use the device better over time," he says. "Someone that has had the device for a year will do better than they did at three months."

The artificial eye uses just 60 electrodes to replace millions of retinal cells. Mech says that means the restored vision is rudimentary, so people can find doors and follow lines on the floor. But most can't read, and those who can are only able to make out very large letters.

At the neuroscience meeting, Second Sight presented a study showing that patients could use the artificial eye to tell which direction an object was moving.

Despite the limitations of the artificial eye, Mech says patients who have received one tend to get emotional when they realize they can see even a little bit.

"There's a lot of crying, a lot of smiling," he says. "It's a sensory input that they haven't had in a very long time, and so they're excited." 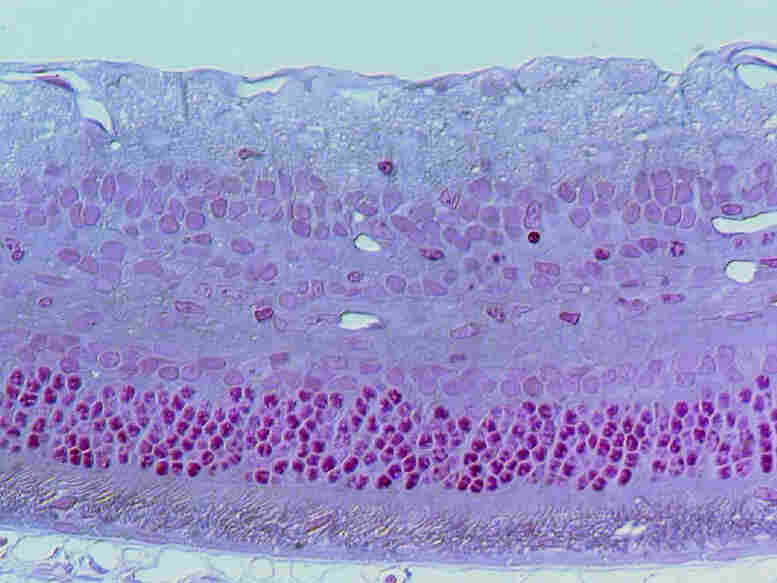 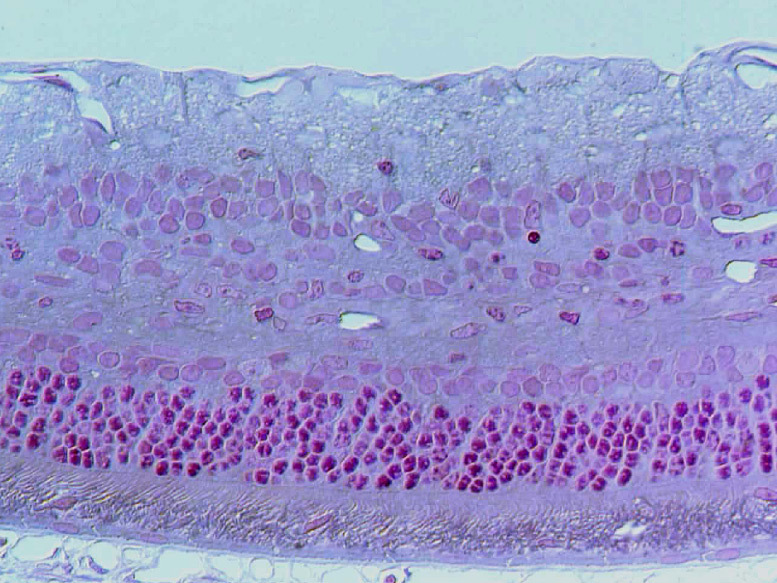 A team led by Robert Aramant of the University of California, Irvine, offered a different approach to restoring sight.

Since the 1980s, Aramant has been working to fix retinas damaged by diseases including macular degeneration and retinitis pigmentosa.

The transplanted cells then mature the same way they would in a developing fetus, creating all the layers of a normal retina, Aramant says.

The team has treated just 10 patients so far, because of funding constraints. But Aramant says seven of those patients got better, including one woman whose vision went from 20-800, which is severely impaired, to 20-200, which is good enough for many daily tasks.

After treatment, Aramant says, the woman was able to play computer games, write emails, and read a large-print version of Reader's Digest.

Also at the meeting in Chicago, scientists presented studies showing ways to create new light-sensitive molecules in the eye, and to use stem cells to grow specific types of retinal cells.