Accessibility links
TV Theme Songwriter Vic Mizzy Dies Mizzy, who made an incalculable contribution to 1960s popular culture, died Saturday at 93. His work, which included the theme songs for Green Acres and The Addams Family, was upbeat and jazzy; it still influences TV theme songs today.

Vic Mizzy, whose theme songs for TV's Green Acres and The Addams Family made an incalculable contribution to 1960s popular culture, died Saturday. He was 93. 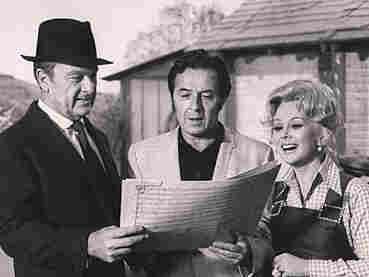 Mizzy was a practitioner of a lost art: writing TV theme songs with lyrics that sum up the premise of the show. His themes were upbeat and jazzy, and still influence TV theme songs today.

Jeff Richmond, who wrote the theme song to 30 Rock, says Mizzy knew the secret to a great theme song: "You want to be able to hear it in the kitchen and know, 'Oh, my show's on," Richmond says.

In an earlier interview with the Archive of American Television, Mizzy said he wanted the timing in the Addams Family opening sequence to be perfect. So he insisted on using a tool called a click track.

"Well, the director — Sidney Lanfield — he didn't know from click track," Mizzy said. "He said, 'Look, Vic, you wrote it. Why don't you just do it?' Well, that's what I did. I directed the main title on camera."

For the Addams Family theme song, Mizzy recorded his own voice and overdubbed it three times. He played the harpsichord, too. He used to joke that he bought his mansion in Bel Air with a couple of snaps of his fingers. That's where he died of heart failure Saturday. Mizzy's funeral was on Tuesday in California.

Vic Mizzy: Even His Name Sounded Like Funny Music