Accessibility links
Facebook, MySpace Divide Along Social Lines Just like real-world communities, online social networks are dividing up along socioeconomic lines. "You have environments in which people are divided by race, divided by class, divided by lifestyle," says social media researcher danah boyd — online communities are no different. 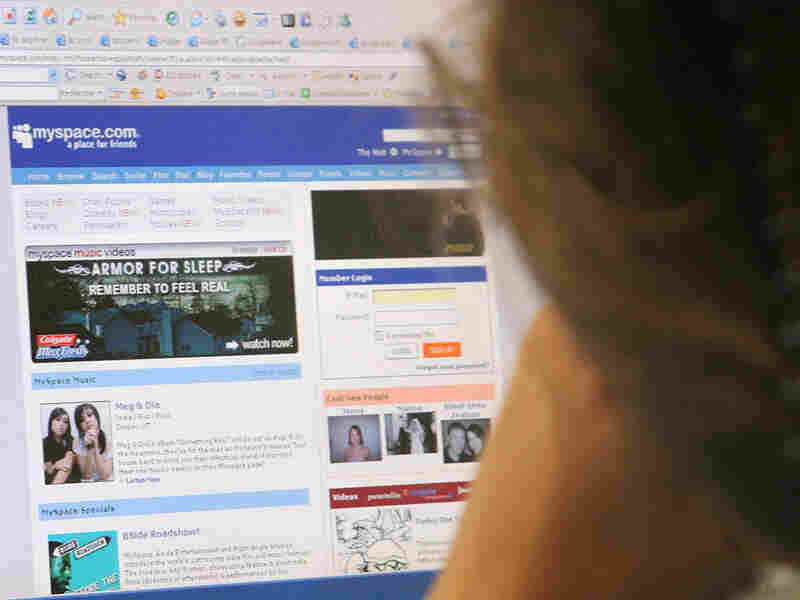 A user browses MySpace in June 2006. In the last few years, MySpace has fallen behind Facebook as the most popular networking site — at least in some circles. "Not to be racist or anything," says 16-year-old Benito Rodriguez, "but there's more white kids on Facebook." Nicholas Kamm/AFP/Getty Images hide caption

Talk to students at The Urban School, an elite private high school in San Francisco, and they will tell you that they used to be on MySpace, but not anymore. Facebook is where it's at for them and their friends.

Facebook is taking over more and more of the social networking space in the U.S. It had an estimated 95.5 million U.S. visitors in September, according to marketing research company comScore. MySpace still has a healthy share — around 65.7 million people — but numbers don't explain it all. If you listen to young site users explain their social networking decisions, the story of the two sites gets more complicated.

"No one uses MySpace," says 17-year-old Halie Pacheco, a student at The Urban School. She likes Facebook. "It's safer and more high class," she explains.

"By 'high class' I think she means organized," adds 16-year-old Olivia Block. "With MySpace there's a lot of clutter."

MySpace pages do look busier than Facebook; on MySpace you can customize graphics and music while Facebook is limited to one spare blue-and-white design. The MySpace clutter seems to symbolize something more to these kids. Sixteen-year-old Nico Kurt lays out his view of the MySpace users this way: "It seems trashy to me. The only people who use it are trashy people."

Well, then there must be 65 million "trashy" people, all hanging out on MySpace. Some of them are teenagers who take an art class at a San Francisco community gallery called Southern Exposure. They are Latino and mostly lower-income. They have their own ideas about who uses which social networks. They are all on MySpace and some of them have Facebook accounts, too.

I have friends who are white. ... They are mostly on Facebook. That's why I use Facebook. My brown people are on MySpace.

"I have friends who are white," says 19-year-old Diego Luna. "They are my white people friends and they are mostly on Facebook. That's why I use Facebook. My brown people are on MySpace."

The class laughs nervously at his description, and then they agree. Benito Rodriguez, 16, adds, "Not to be racist or anything, but there's more white kids on Facebook."

Social media researcher danah boyd (she doesn't capitalize) has heard a lot of conversations just like this. In her work for Microsoft she's spoken to teens all over the country about their use of social media. She thinks the online social world is dividing up — just like the real world — into neighborhoods.

"Young people — and for the most part adults as well — don't really interact online with strangers," she says. "They talk to people they already know. You have environments in which people are divided by race, divided by class, divided by lifestyle. When they go online they are going to interact in the same way."

Business analysts have been writing off MySpace lately, and boyd thinks one of the reasons is that the analysts don't belong to the social groups that use MySpace. Boyd believes MySpace is actually in a great place for advertising because, she says, low income people are more likely to click on ads.

"You don't want to brand yourself as the network for low-income Hispanics, or low-income, or some other similar segment," says Ray Valdes, an analyst with Gartner who follows social networking sites. He agrees that low-income people click more, but that doesn't necessarily mean that they buy what advertisers are selling.

MySpace also has a very strong user base among artists who are drawn to its tools for decorating home pages and musicians who use it to promote their music.

"MySpace has done such a good job of serving their core audience," says Charlene Li of Altimeter Group. She says if MySpace wants to compete, it's going to have evolve the way Facebook has. Facebook has added more features in response to the new people who are coming to the site as it grows. Li explains, "The reason they have not peaked and fallen off is that they have not remained still."

However, the teenagers at the private Urban School say they don't have any particular loyalty to Facebook.

"Teenagers ... always like to go from one thing to another," says Nico Kurt, 16. "Facebook is that thing [now], but I think it is going downhill ... There is going to be a new cool thing sooner or later."

In case anyone is thinking maybe the next cool thing is Twitter, think again. Kurt says Twitter is for old people.