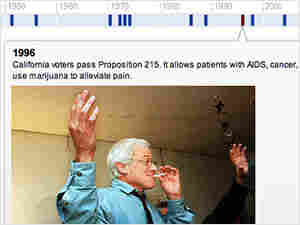 TImeline: The Highs And Lows Of Marijuana

The Obama administration's new hands-off policy on medical marijuana is getting mixed reviews in California.

Some cities that have been trying to put a lid on any new marijuana storefronts aren't happy. The new policy comes at a time when parts of California are feeling a little overrun by medicinal pot.

He adds, "People don't realize it is like the wine industry, with boutique flavors and tastes."

Lee is one of many dispensary operators who hope the administration's policy signals a shift in cultural attitudes toward marijuana.

It's been abused, and it's simply a mask for the recreational use of marijuana with the doctors who write prescriptions at will for a different dollar value, whether its $65 or $100 or $200.

"And that's what we see happening now with all these cannabis outlets being opened, because you got to remember: They don't operate in a vacuum," he says. "That means landlords willing to lease them space. There's lots of employees willing to work there. So the culture has already embraced this. It's just a matter of time till the politicians catch up."

But law enforcement officials and elected leaders around California are skeptical.

Cooley recently announced a crackdown on the estimated 800 medical marijuana dispensaries that have mushroomed in his county in the past year.

"The vast, vast, vast majority — about 100 percent of dispensaries in Los Angeles County and city — are operating illegally," he says.

Cooley says the dispensaries are in violation of the law because they are operating as moneymaking businesses and not as nonprofit collectives.

"We all support it," he says. "It's been abused, and it's simply a mask for the recreational use of marijuana, with the doctors who write prescriptions at will for a different dollar value, whether its $65 or $100 or $200. ... People are abusing it, and they are simply using it to get high."

Robberies And A Nuisance

Zine says the expansion of medical cannabis dispensaries in Los Angeles has led to a rash of robberies — at least 200 over the past two years.

In many neighborhoods, residents regard the pot stores as a nuisance, according to John Lovell, a lobbyist for California police groups.

"If this law had been genuinely restricted to the terminally ill for pain management, you wouldn't see this pushback now," Lovell says. "But the law was written not by people who care about pain management for sick people, but by people who were trying to use the law as a subterfuge for de facto legalization."

But Los Angeles has found it difficult to stop the growth of medical marijuana storefronts. A measure banning any new ones was overturned Monday in court, so the city is back to the drawing board, trying to write a new rule that will pass muster.

What If Marijuana Were Legal? Possible Outcomes April 20, 2009