Accessibility links
CDC Weighs HPV Vaccine For Boys An advisory committee to the Centers for Disease Control and Prevention will decide tomorrow whether to recommend that boys get the human papilloma virus (HPV) vaccine. The vaccine protects against the most common strains of the virus that causes genital warts and cervical cancer. 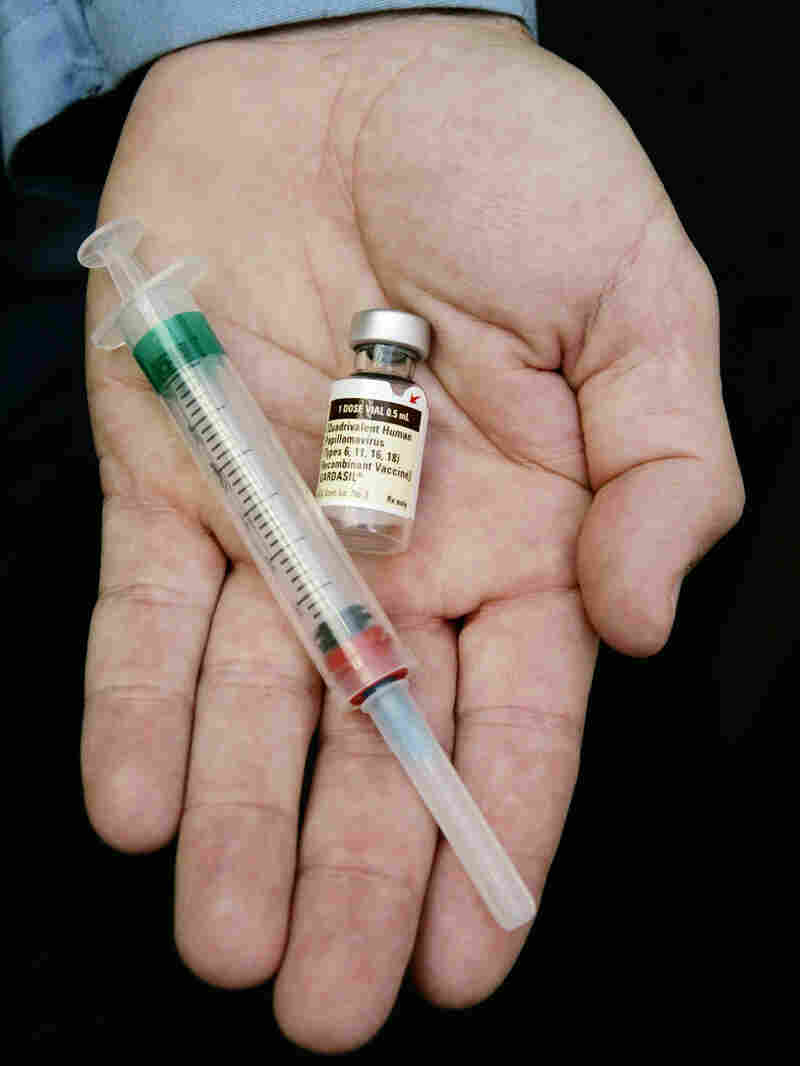 A doctor holds the human papilloma virus vaccine Gardasil. The Centers for Disease Control and Prevention will decide on Wednesday whether to recommend that boys get the vaccine. Charles Rex Arbogast/AP hide caption 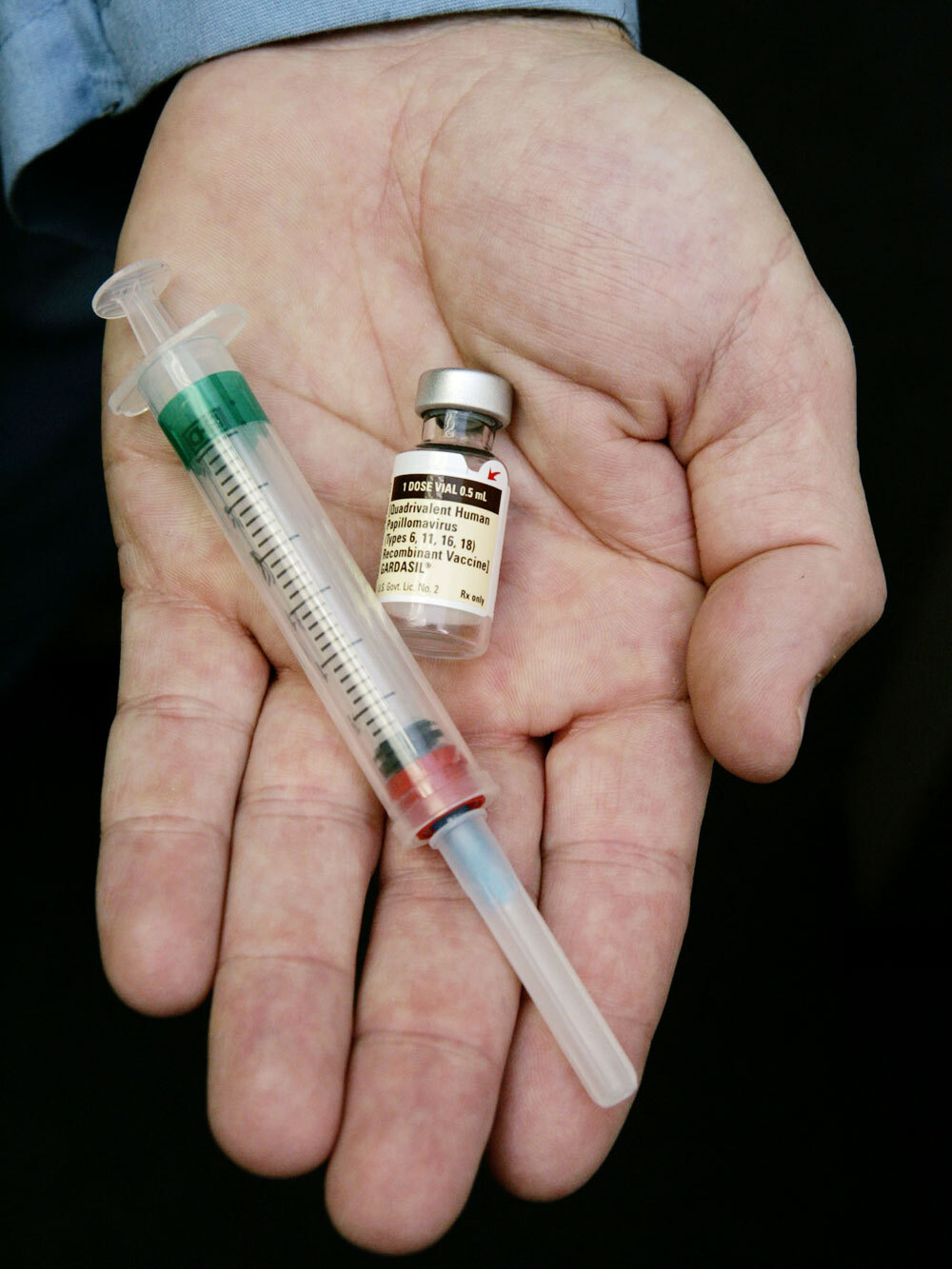 A doctor holds the human papilloma virus vaccine Gardasil. The Centers for Disease Control and Prevention will decide on Wednesday whether to recommend that boys get the vaccine.

An advisory committee to the Centers for Disease Control and Prevention (CDC) will decide Wednesday whether to recommend that boys get the human papilloma virus (HPV) vaccine. The vaccine protects against the most common strains of the virus that causes genital warts and cervical cancer. Both men and women transmit HPV.

The vaccine has already been recommended for girls when they reach the age of 11. And last week, the Food and Drug Administration (FDA) approved Merck's HPV vaccine, Gardasil, for 9- to 26-year-old men to provide protection against genital warts.

But the big question facing CDC advisers is whether it is cost-effective to spend money vaccinating boys against a disease that has more serious consequences for women.

At least half of sexually active people will get the infection at some point in life. Men often have no symptoms of the disease, or they may get genital warts that can be easily treated. In very rare instances they develop genital cancers.

In women, however, untreated cases do more frequently lead to cervical cancer. The CDC estimates that more than 11,000 women in the United States develop cervical cancer each year.

For Dr. Neal Halsey, a professor at the Johns Hopkins School Bloomberg School of Public Health, the debate is about common sense. "To control the transmission of HPV would be to immunize both men and women, boys and girls," he says. "The right thing to do -- from a scientific standpoint, ethical standpoint, in terms of shared responsibility -- is to immunize all boys, all girls."

Some Question If The Benefit Is Worth The Cost

A recent study by a group of Harvard professors found that the costs of vaccinating boys exceeded the benefits from doing so. This was especially true if most women in the United States were immunized, according to the authors of the study, professors Jane Kim and Sue Goldie.

Cost effectiveness is determined by what the health system is willing -- and what insurance companies or taxpayers are willing -- to pay for any benefit that might be achieved.

Those costs are affected by how many girls get all three shots of Merck's $130-a-dose vaccine. If very few girls are getting the vaccine, then vaccinating boys helps to prevent the spread of HPV.

Here in the U.S., surveys conducted by the Centers for Disease Control show just 37 percent of girls between age the ages of 12 and 17 getting just one shot. At that rate, Dr. Erik Dasbach says, Gardasil becomes cost effective.

"That accounts for the vaccine, and for screening for cervical cancer compared to all the costs that would be avoided by preventing HPV diseases -- cervical cancer, vulva cancer, vaginal cancer and genital warts cases -- all significant associated costs," she says.

When you look at it that way, vaccinating boys falls well below the threshold of $50,000, Dasbach says.

In the United Kingdom, however -- where nearly 80 percent of the girls have gotten the HPV vaccine -- there are no plans to immunize boys even to share the responsibility of controlling the spread of HPV.

Professor John Edmunds says the comparison should really be about what would be the best way to protect girls in the United States. "Both sides are acquiring infection from the other, so clearly it's a shared responsibility," Edmund says. "But clearly the risks are far greater for girls."

An Ethical Argument In Favor Of Vaccination

Dr. Neal Halsey, a professor at the Johns Hopkins School of Public Health, says there's an ethical argument for vaccinating boys as well as girls against HPV.

"I think most parents would want their sons to not transmit disease to their potential or already existing daughters-in-law and prevent early death due to cervical cancer in the mother of their grandchildren," Halsey says.

Many analysts had hoped that Merck would hold off seeking approval of getting Gardasil licensed for girls in 2006, until tests had been completed in boys. Then Merck could have offered the vaccine universally for adolescents of both genders at a lower price than $130 a dose. That, analysts say, would have been cost effective.

Sex, Shots And Pre-Adolescents: The HPV Vaccine
What Doctors Are Telling Patients About HPV Vaccine Sept. 7, 2009