Accessibility links
Microsoft Windows 7 Operating System Debut Launches An Upgrade Debate Microsoft's new Windows 7 has already scored points for being a better operating system than Vista because it's easier to use and control. But given its price, the economy and other operating systems in use, many people may wait to upgrade. 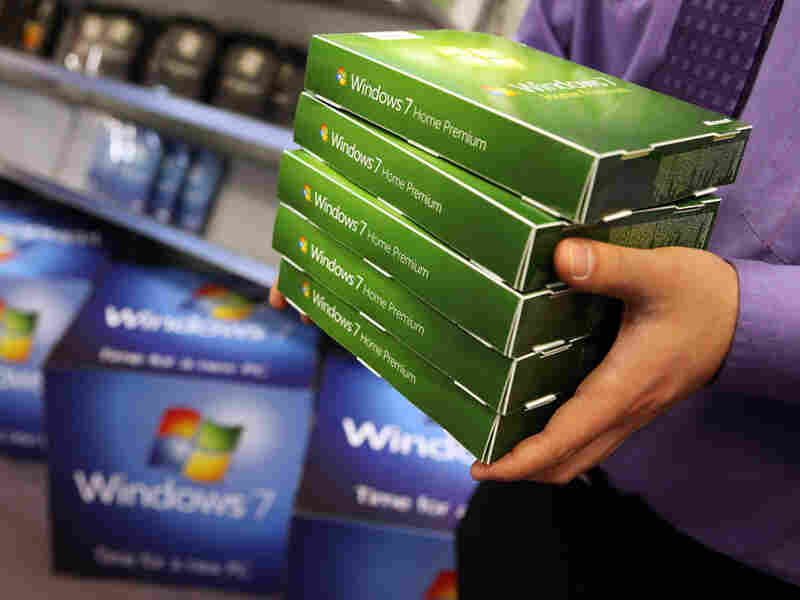 A computer store employee stacks copies of Microsoft's new operating system, Windows 7, ahead of its official launch in London. The software goes on sale in the U.S. on Thursday. Oli Scarff/Getty Images hide caption 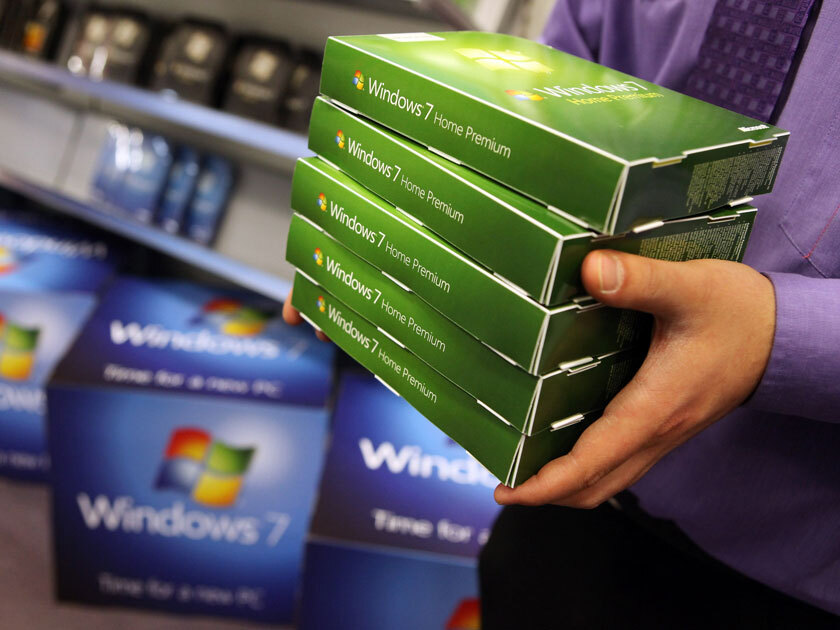 A computer store employee stacks copies of Microsoft's new operating system, Windows 7, ahead of its official launch in London. The software goes on sale in the U.S. on Thursday.

Some of the changes in Windows 7 include:

— A cleaned-up look and feel

— Context-sensitive menus that allow you to select frequently used operations like listening to music, launching a program or opening a specific file

Microsoft's new Windows 7, which goes on sale Thursday, has already scored points for being a better operating system than Vista because it's easier to use and control.

But given its price, the battered economy and the variety of different operating systems in use, computer industry analysts say many people will take a wait-and-see approach before upgrading.

"If Vista is not a problem for you, you don't really need to go out and spend the money," says Jeff Fox, the technology editor for Consumer Reports. "There's not a compelling reason."

Many people reported that Vista, which was released in January 2007, had some serious problems, including sluggish performance and its nagging of users about security issues every time software was about to be installed. "Microsoft has fixed those flaws and given it a little bit of a face-lift," says Fox, adding that it's not a "radical" change.

Before deciding whether to upgrade, Consumer Reports says to check out Microsoft's Windows 7 Upgrade Advisor to make sure that your computer, printer and other peripherals, as well as your software, are compatible with the new system.

Here are some tips to consider before upgrading:

Fox of Consumer Reports says that if you've owned a computer for a year or two and are using Vista without any problems, then pass on Windows 7. But if you're annoyed by the nagging or sluggishness, then upgrade.

When it comes to speed, Steve Fox, editorial director of PC World magazine, says Windows 7 is "only marginally faster than Vista."

If you purchased Vista or a PC that runs Vista after June 26, you're also eligible for a free upgrade through Microsoft or the PC manufacturer.

Windows XP users represent the largest population of PC users. Unfortunately, the upgrade for this group isn't simple. The process of migrating from XP to Windows 7 is "ugly," says Steve Fox. "It's not an upgrade. It's basically a rip and replace." Here's why: You'd have to back up your hard drive, reformat it, install Windows 7 and then restore all of your personal files and your application software. The other option, says Jeff Fox of Consumer Reports, would be expensive because you'd have to upgrade to Vista first and then to Windows 7.

"One of the missteps with Windows 7 [is that] the upgrade process for those who skipped Vista — which is most of the world — is pretty tortuous," says Carl Howe of Yankee Group. "And I think that's going to put a damper on Windows 7 sales."

A spokesman for Microsoft declined to comment on criticism regarding upgrading from XP to Windows 7.

Another source of confusion for consumers may be whether to purchase a 32-bit or a 64-bit version (the price is the same). Howe says having this extra memory capacity doesn't make a big difference for most of the hardware available today, but that could change in a few years.

Walter Mossberg of The Wall Street Journal tested Windows 7 on 11 different computers, including desktops, laptops and netbooks. In his review, he concluded that "it is the best version of Windows Microsoft has produced. It's a boost to productivity and a pleasure to use." He also found that the installation typically took 45 minutes or less to complete. 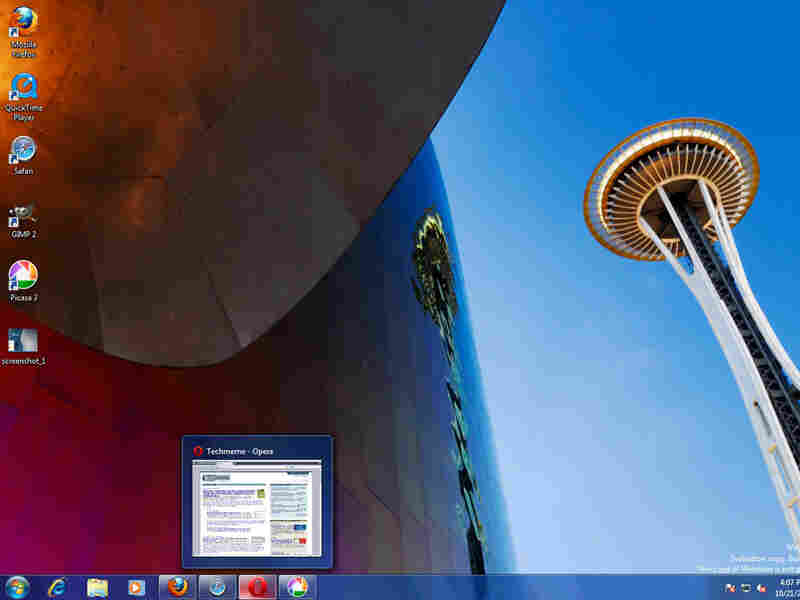 One of the features of Windows 7 is a cleaner look and feel. The screen shows the new preview menu that's part of the operating system. NPR hide caption 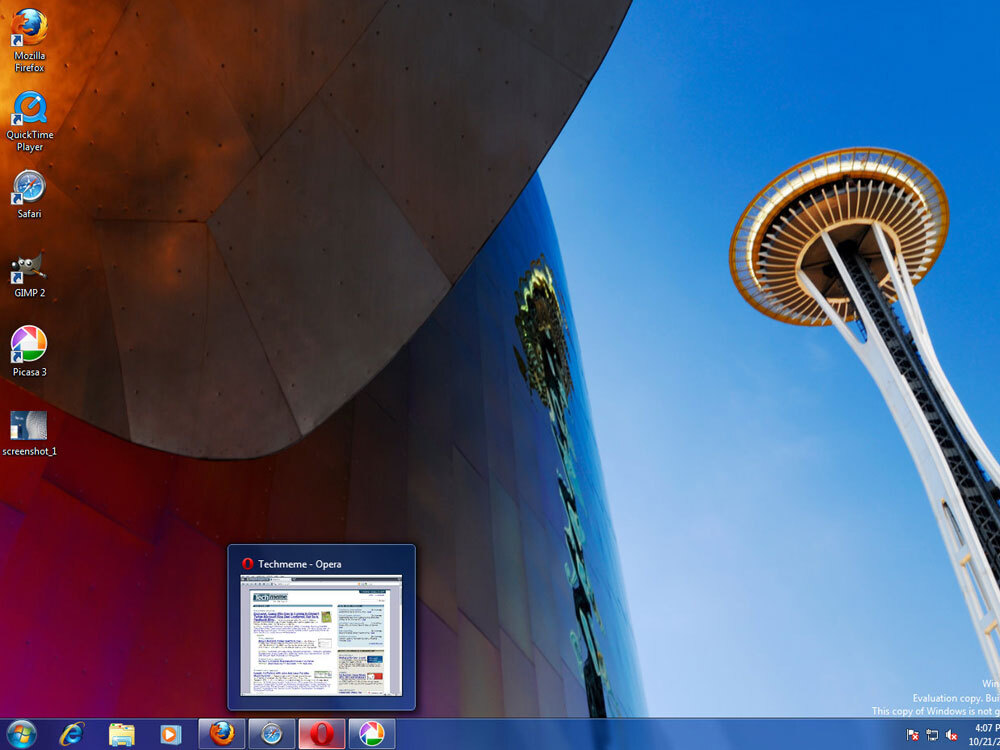 One of the features of Windows 7 is a cleaner look and feel. The screen shows the new preview menu that's part of the operating system.

Howe says the difficulty of upgrading, especially from XP to Windows 7, is part of a strategy. "The message Microsoft is sending with this type of upgrade path: 'Don't try this at home. Buy a new computer.' "

Other industry insiders say dissatisfaction with Vista has created an appetite. "If you're buying a new PC, I think you'd be crazy not to get Windows 7," says Steve Fox. "Frankly, I think there's a lot of pent-up demand to buy new systems."

Software For The Future?

Hewlett-Packard and other hardware manufacturers have been waiting for the release of Windows 7 to unveil new lines of touch-screen computers that allow you to use two fingers to accomplish tasks like opening programs, viewing photographs or navigating.

But, Steve Fox says, for most people, Windows 7's built-in multitouch functionality "will mean absolutely nothing because you need hardware that is capable."

Howe, of the Yankee Group, wonders whether Windows 7 is the right product for some of the hot new products in the market, including netbooks, the smaller cousins of laptops. The Windows pricing structure is a "very expensive component" on netbooks, Howe says, adding: "We're already seeing a difference in pricing between netbooks running Windows 7 and netbooks running Windows XP or Linux."

Howe notes that Microsoft has generally adhered to a schedule of major updates for its operating system once every two or three years — with the exception of the 2007 Vista release (the previous software, XP, was released in 2001).

Apple typically does a once-a-year OS update, and it seized the spotlight earlier in the week with its announcement of a new desktop computer, a new laptop and a new mouse.

Some of the challenges of upgrading, especially for XP users, may lead some people to think about these Windows alternatives, including Mac OS, Linux or Android, Howe says. "We're starting to see a wider variety of consumer devices," he says. "Increasingly, it's the ability to connect to the Net, not Windows, that's important."