Accessibility links
An Indian Reservation As Economic Engine? Despite the recession, the Salt River reservation near Phoenix is booming. It's partly from stimulus money, but the reservation is also drawing investors looking to make a quick return. The Pima-Maricopa Indian Community has parlayed casino revenue into a diverse and dynamic economy. 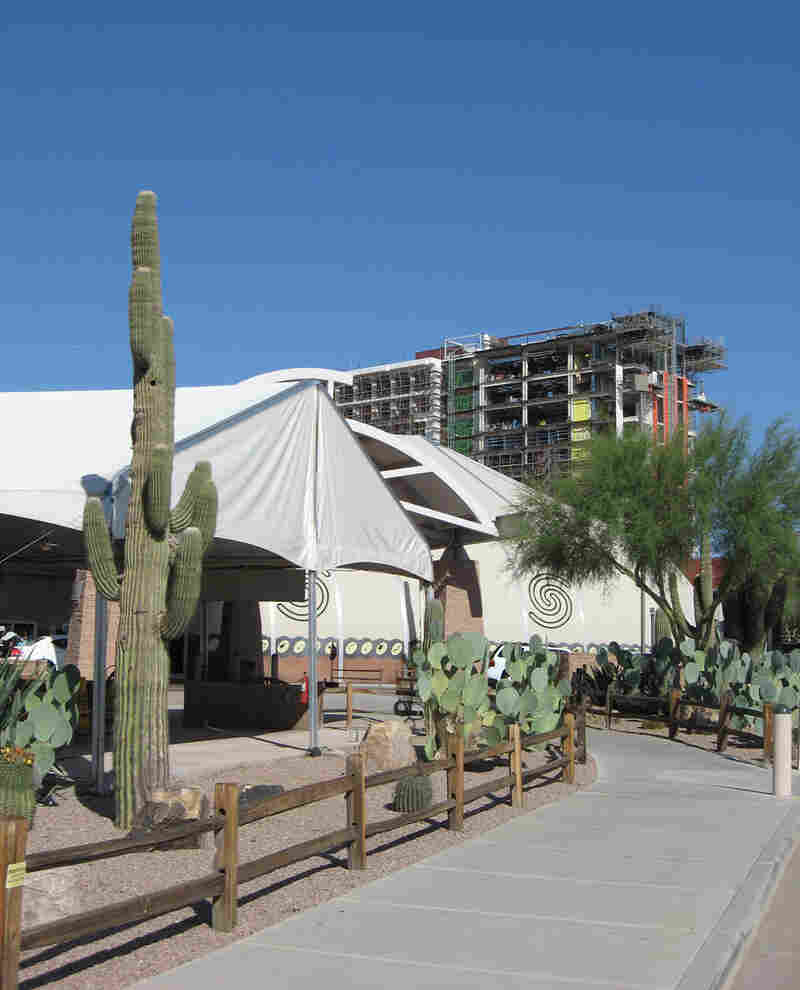 The new 500-room Casino Arizona at Talking Stick Resort (in the background) near Phoenix is scheduled to open in April as part of a new upscale entertainment district on the Salt River reservation. Daniel Kraker for NPR hide caption 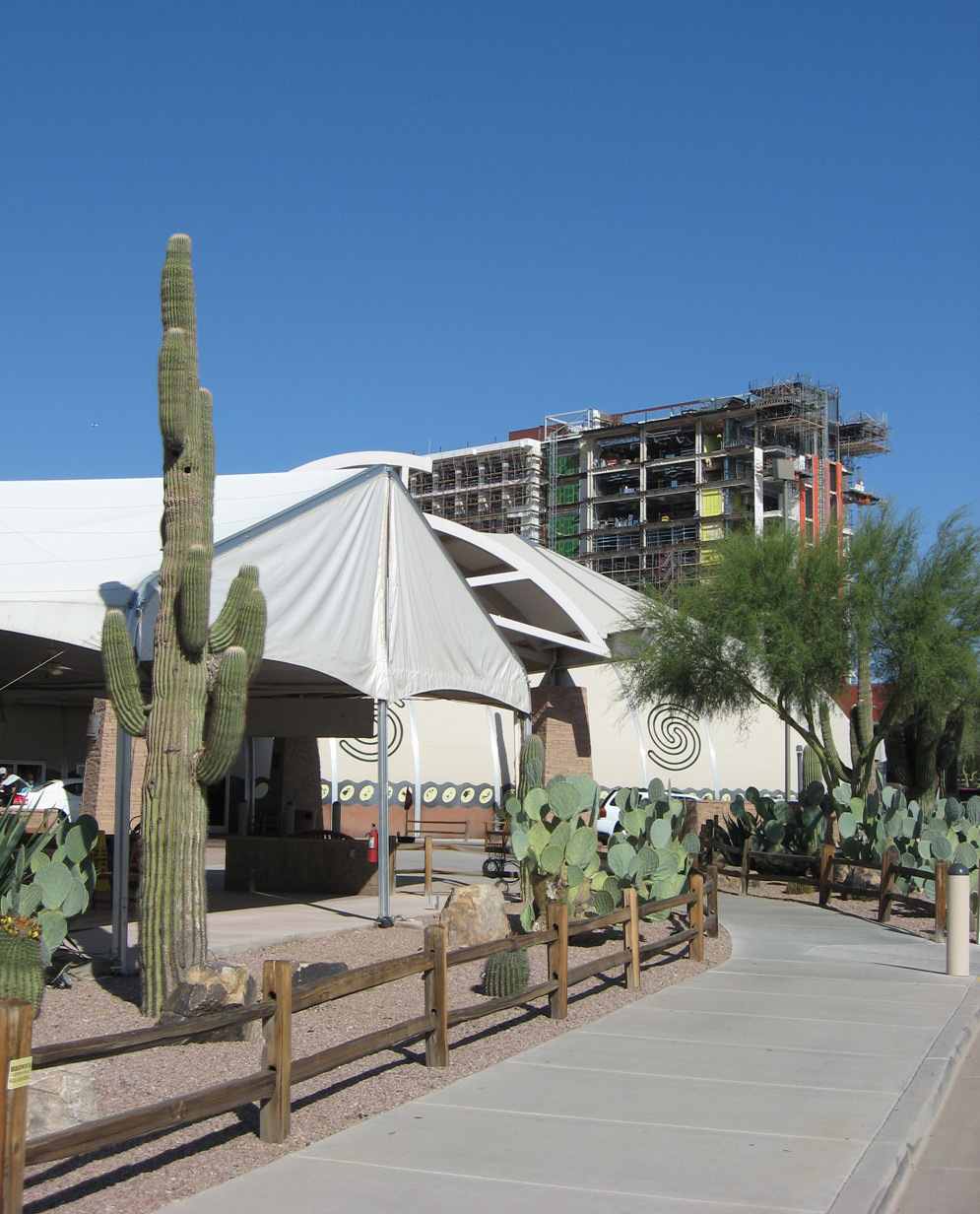 The new 500-room Casino Arizona at Talking Stick Resort (in the background) near Phoenix is scheduled to open in April as part of a new upscale entertainment district on the Salt River reservation.

On a small reservation in the Phoenix area, the Salt River Pima-Maricopa Indian Community has felt the pinch of the recession.

But despite the economic downturn, the reservation is booming.

Even during a recession, patrons are still pumping quarters into the slots at Casino Arizona on the Salt River reservation.

And next month, the Salt River community will break ground on a $100 million spring training baseball stadium for the Colorado Rockies and Arizona Diamondbacks.

It'll be the first professional sports facility ever built on tribal land, according to Arizona Diamondbacks CEO Derrick Hall. And it will be part of new upscale entertainment district with a posh 500-room resort and casino scheduled to open in April.

In a strange way, the recession has helped make this happen. The project is being financed in part with a $20 million tax-exempt bond authorized by the federal stimulus bill.

"Everybody's really excited about this development — not only for the 2011 opening season, but for the future," says Martin Harvier, the community's vice president, as he walks through an old golf course where the stadium will be built.

The second of a two-part report. Read the first story.

"From where we're standing here, we're three-quarters of a mile from a major freeway, 15 minutes away from Sky Harbor, one of the busiest airports. Just the area where we're at is a benefit to our community and our economic development," he says.

'Nobody Can Compete' With Location

Indeed, the community's location, right next to ritzy Scottsdale, is its biggest selling point.

Inside a big boardroom in the tribe's brand new government complex, economic development manager Quannah Dallas points at a giant map of the reservation. It's an island of undeveloped land in a sea of Phoenix sprawl. Several yellow sticky notes dot the map: They are the locations of future developments.

"No one can compete with the location we have," Dallas says. "Developers who are in it for the long haul, who understand that we're asking them to make a commitment, there are benefits and rewards to them."

The Salt River community's casinos have helped make the boom possible. But the tribe has parlayed that gaming revenue into a diverse and dynamic economy. They operate everything from a cement plant to a real estate development company, to a telecommunications provider that's wired the reservation with superfast Internet service.

All this offers rewards that more and more developers are starting to realize.

Dozens of businesses are now located on the Salt River community, including four corporate headquarters, such as Cold Stone Creamery and guitar maker Fender.

"There are some places across Indian country now where it's real clear investors would rather put their money on an Indian reservation, under the jurisdiction of a tribe," says Joseph Kalt, who directs Harvard's project on American Indian Economic Development.

Kalt singles out a handful of mainly urban tribes, from the Tulalip north of Seattle, to the Salt River Community in Phoenix, that are booming.

"Partly because tribes are relatively small, they're often quicker on their feet," he says.

As a result, investors can often make a quicker return on tribal land than they could on land administered by city or county governments. And because there's been so little development on most Indian reservations, Greg Guedel, the chair of Native American Legal Services, says investors can get in on the ground floor.

"So if you build a project in a tribal setting, you're likely to get an upside in terms of low cost and future return," Guedel says. "That's better than you would find in most other jurisdictions."

The Salt River community is pumping the majority of its revenues back into tribal-owned businesses, as well as into new schools, and health and community centers, trying to catch up from the pervasive poverty of only a few years ago. It's a mind-boggling transformation.

"I remember drinking water out of a wooden barrel under a tree at my grandmother's house, to see it go from a very impoverished community and, year by year, beginning to develop," says Ramon Martinez, public relations director for Salt River's two casinos.

In less than two decades, it transformed itself into a major economic player in the region.