Accessibility links
Accidents Of History Created U.S. Health System Since the 1960s, Americans have looked at employer-based health insurance as though it were the natural order of things. But economic historians say there was never any central logic at work in building that system. 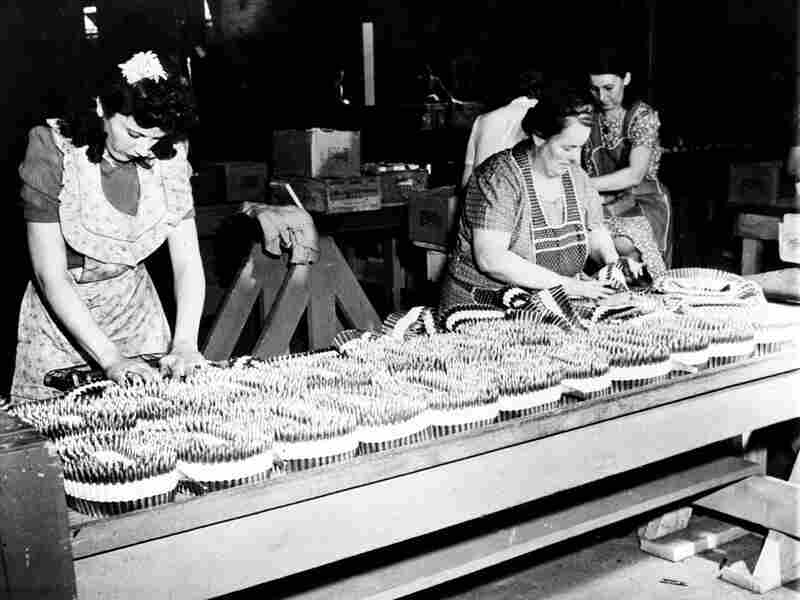 Workers pack bullets into machine gun belts in 1942. Factories like the one these women worked for used fringe benefits, including health insurance plans, to lure new employees in response to increased demand for goods during World War II. AP hide caption 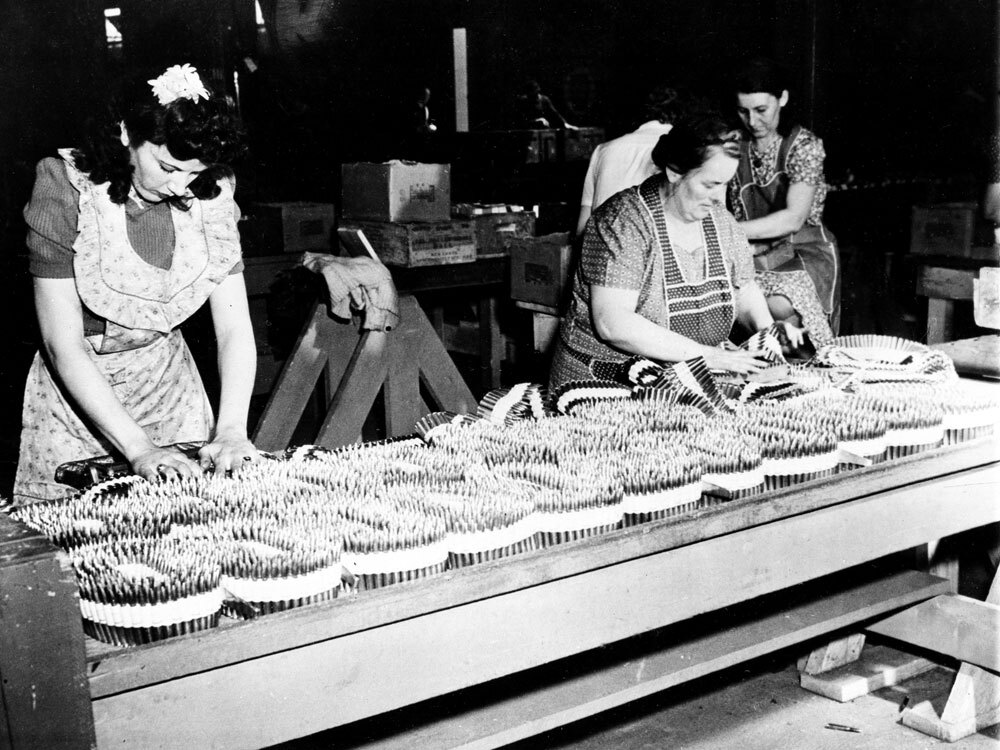 Workers pack bullets into machine gun belts in 1942. Factories like the one these women worked for used fringe benefits, including health insurance plans, to lure new employees in response to increased demand for goods during World War II.

If you want to understand how to fix today's health insurance system, you'd be smart to look first at how it was born. How did Americans end up with a system in which employers pay for our health insurance? After all, they don't pay for our groceries or our gas.

It turns out there never was any central logic at work. The evolution of the American health care system began in the 1920s, when choices boiled down to which crazy cure you preferred.

Dr. John Brinkley, for instance, was a huge hit in American radio with his health advice shows. For whatever problem folks had, Brinkley had one fabulous solution: transplant a goat gland into your body. He pitched it as being perfect for everything from dementia to impotence to flatulence. But if, somehow, a goat gland didn't cure your ills, you could always use Bonnore's Electro Magnetic Bathing Fluid or Clark Stanley's Snake Oil Liniment.

Get Smarter About Economics

In that era, most medical care in the U.S. was basically medieval — a bunch of potions that did nothing. Luckily, though, they were cheap potions. Health care was a trivial part of the average person's annual budget. In 1900, the average American spent $5 a year on health care ($100 in today's money). No one had health insurance, because you don't need insurance for something that costs $5 a year.

Before the birth of modern medicine, hospitals were poorhouses where the indigent went to die. Then came the advent of effective medicines, especially antibiotics, along with a revolution in medical schools.

Suddenly, says economic historian Melissa Thomasson, "hospitals are marketing themselves as places to have babies." The professor at the Miami University in Ohio says that in the early part of the 20th century, hospitals were able to focus on happy outcomes.

Health care became much more effective, and much more expensive. Clean hospitals, educated doctors and real pharmacological research cost money. People proved willing to pay for care when they were really sick, but it wasn't yet common to go for checkups or survivable illnesses.

By the late 1920s, hospitals noticed most of their beds were going empty every night. They wanted to get people who weren't deathly ill to start coming in.

An official at Baylor University Hospital in Dallas noticed that Americans, on average, were spending more on cosmetics than on medical care. "We spend a dollar or so at a time for cosmetics and do not notice the high cost," he said. "The ribbon-counter clerk can pay 50 cents, 75 cents or $1 a month, yet it would take about 20 years to set aside [money for] a large hospital bill."

The Baylor hospital started looking for a way to get regular folks in Dallas to pay for health care the same way they paid for lipstick — a tiny bit each month. Hospital officials started small, offering a deal to a group of public school teachers in Dallas. They offered a plan for the teachers to pay 50 cents each month in exchange for Baylor picking up the tab on hospital visits.

When the Great Depression hit, almost every hospital in the country saw its patient load disappear. The Baylor idea became hugely popular. It eventually got a name: Blue Cross.

"When I actually started studying this stuff, I got interested because I wondered why we have an employer-based system," Thomasson says. "It comes right out of Blue Cross." The genius of that approach, she says, was marketing it to groups of workers.

The Modern System Is Born

Soon, Blue Cross coverage was available in almost every state, though not many people bought in. The modern system of getting benefits through a job required another catalyst: World War II. Thomasson says that if the Great Depression inadvertently inspired the spread of employer-based health insurance, World War II accidentally spread the idea everywhere.

"The war economy is an entirely different ballgame," Thomasson says. The government rationed goods even as factories ramped up production and needed to attract workers. Factory owners needed a way to lure employees. She explains that the owners turned to fringe benefits, offering more and more generous health plans.

The next big step in the evolution of health care was also an accident. In 1943, the Internal Revenue Service ruled that employer-based health care should be tax free. A second law, in 1954, made the tax advantages even more attractive.

Thomasson cites the huge impact of those measures on plan participation. "You start from 9 percent of the population in 1940 to 63 percent in 1953," she says. "Everybody starts getting in on it. It just grows by gangbusters. By the 1960s, 70 percent [of the population] is covered by some kind of private, voluntary health insurance plan."

Thus employer-based insurance, which started with Blue Cross selling coverage to Texas teachers and spread because of government price controls and tax breaks, became our system. By the mid-1960s, Thomasson says, Americans started to see that system — in which people with good jobs get health care through work and almost everyone else looks to government — as if it were the natural order of things.

But to Thomasson and other economic historians, there's nothing natural or inevitable about it. Instead, they see it as the profound result of historical accidents.