Accessibility links
Violence In Rio Raises Olympic Security Concerns Weeks after Rio de Janeiro was awarded the 2016 Olympics, a turf battle between drug gangs has killed two dozen people, including three police officers. The gang warfare raises questions about Rio's ability to control the violence that has plagued its sprawling slums for years. 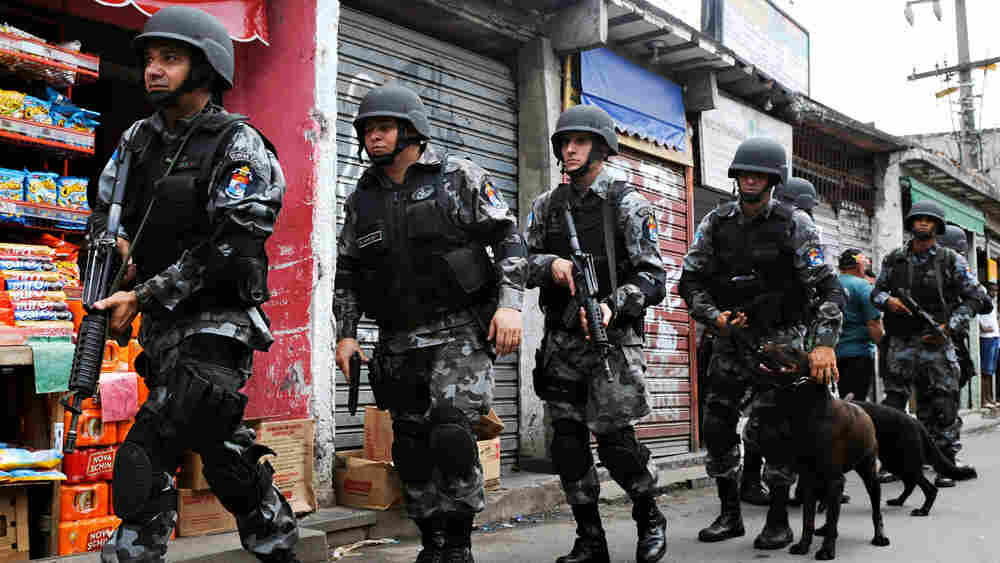 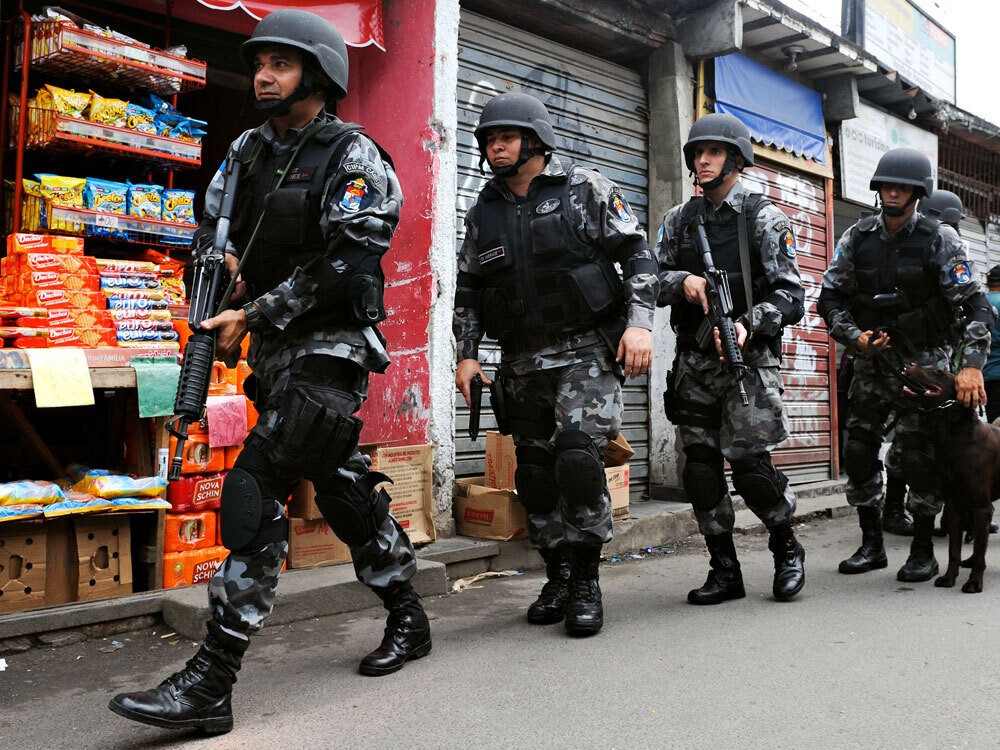 Just weeks after Rio de Janeiro was awarded the 2016 Olympics, a deadly outburst of violence descended on the Brazilian city. Warring drug gangs left two dozen people dead, including three police officers whose helicopter was shot down with a high-powered rifle.

The gang warfare garnered headlines worldwide and raises questions about Rio's ability to control the relentless violence that for years has plagued the city's sprawling slums and sometimes spilled down into its famous tourism districts.

Miriam Silva da Maceo grinds sugar cane for the sweet juice she sells on a street leading up into the favela, or slum, called Morro de Macacos.

She says things have calmed down since the weekend, when the area became a war zone. She says she can't dwell on the gunfight, though — she has to work to feed five children.

It's a normal response to the violence that has long marked life in hundreds of favelas — crowded hillside communities that are home to more than 2 million people. 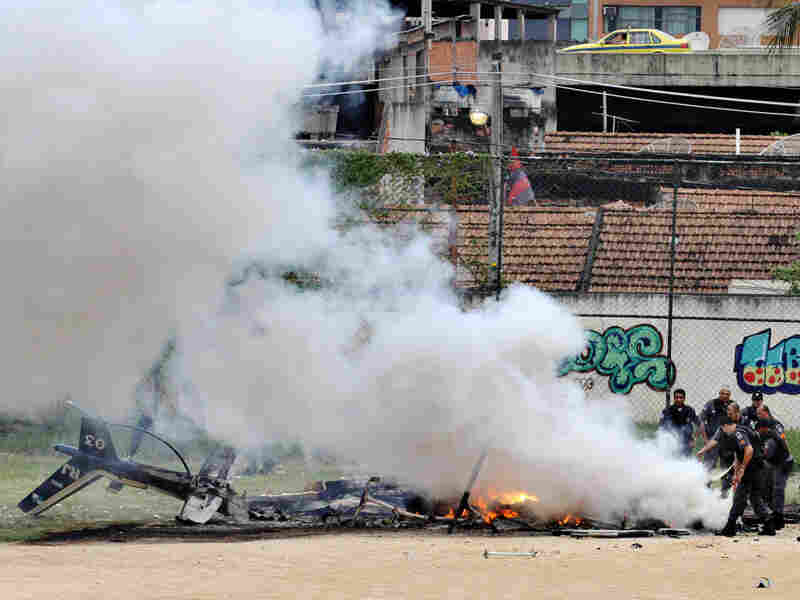 Police officers extinguish a fire from the wreckage of a police helicopter in the Morro de Macacos slum of Rio on Oct. 17. Drug traffickers shot down the helicopter during the weekend's violence. Alexandre Brum/Agencia O Dia/AP hide caption 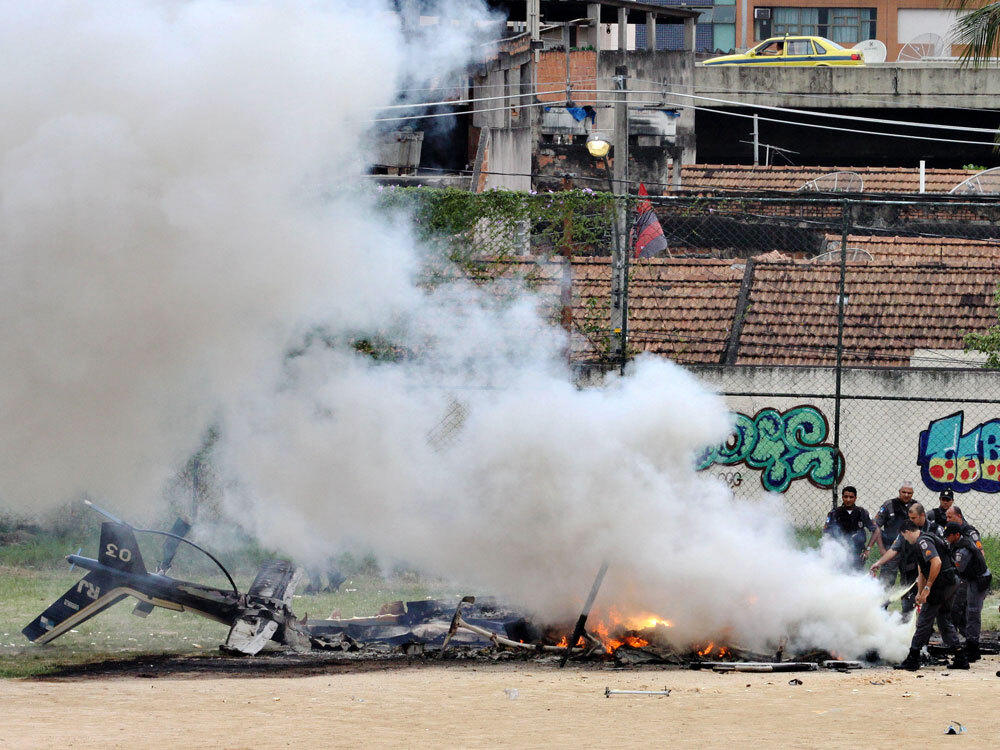 Police officers extinguish a fire from the wreckage of a police helicopter in the Morro de Macacos slum of Rio on Oct. 17. Drug traffickers shot down the helicopter during the weekend's violence.

But the mayhem that struck on Saturday surprised even the beleaguered slum dwellers. A turf battle ignited between drug-trafficking gangs; one by one, young men began dropping dead.

Then, when a police helicopter zeroed in, the gunmen started shooting into the sky. The helicopter crash-landed and burst into flames. Three policemen died.

The violence has been a staple on Brazilian TV channels all week, a reminder of how ineffective the police have been until now.

"In the past, the police would go, they would fight the traffickers and they would leave," Beltrame said.

Now, he says, the strategy is to clear out drug gangs with heavily armed militarized police and then establish a permanent presence, using new community policing units.

The police patrols are supposed to develop links with residents. Beltrame said officials hope those links will break the drug gangs' hold.

"And at this level, the police can know the people in the community, know what is going on and are able to identify any sort of strange movement that might be happening and shut it down immediately," he said.

But forging ties won't be easy.

Brazilian authorities admit that many policemen are corrupt and brutal. There are even violent militias — made up of off-duty policemen and firemen — that compete with drug gangs for control.

Barbara Olivi lives in the vast Rocinha favela. With a population of 150,000, it's the city's largest. She described heavy-handed police tactics and the ever-present helicopters.

"The other day, they arrived here at 6 o'clock in the morning. I opened the window, and I saw a helicopter facing me if I open the window and then suddenly I make a movement, they may shoot at me, so, you know, very slowly I put my hand high," she said.

Olivi spoke from inside the cramped offices of an organization that tries to get young people off the streets.

No Illusions About End Of Violence

Just outside, a maze of narrow passageways leads past tiny cinder block homes, the sky above a tangle of jury-rigged electrical wiring. Businesses are crammed into tiny storefronts, and motorcycle taxis zip passengers deep into the favela.

In a way, there is a semblance of normalcy.

But the presence of young men with assault rifles — a common sight in the network of alleyways — is a sign of the danger.

Some of those familiar with the favelas have no illusions, and they worry about just how common the violence has become.

"The violence you are seeing on TV which happened last weekend you have almost every day," said Annie Hasemanns, who helps run a school for poor children. "If not in this favela, you have it in another favela."

And there's no end in sight: On Wednesday, police killed three more suspected gang members in the hunt for those who shot down the helicopter.