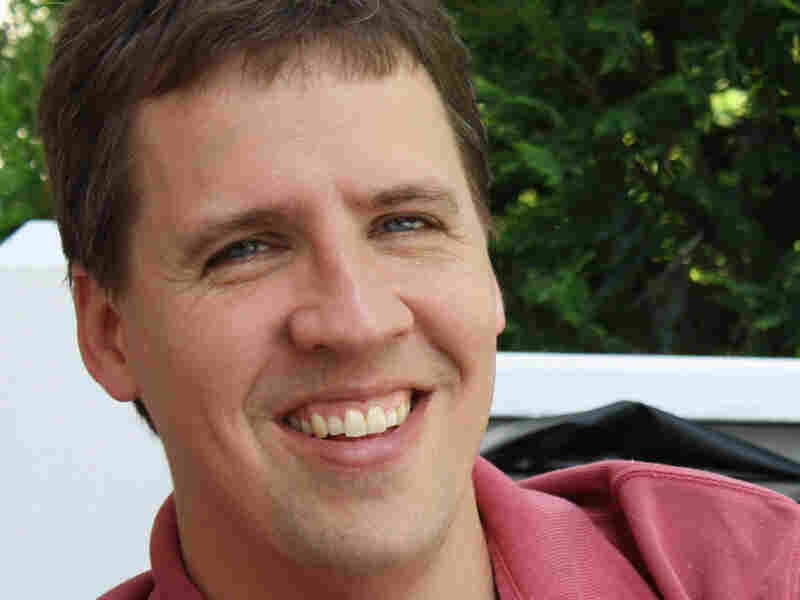 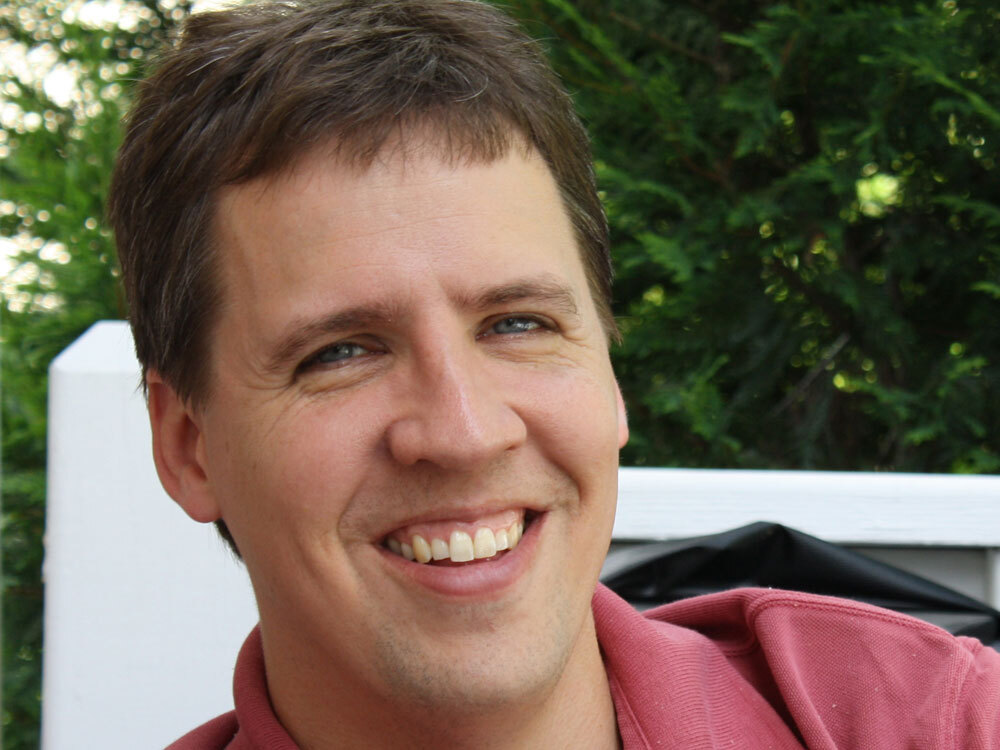 Jeff Kinney's newest book, Diary of a Wimpy Kid: Dog Days is the largest book release so far this year, with 4 million copies in the first printing.

The Bible says that the meek might one day inherit the earth. For now, one particularly meek kid named Greg Heffley is burning up children's book best-seller lists.

"I think most of Greg's unhappiness, he brings upon himself," the author explains. "Greg can't win, because that's Charlie Brown trying to kick the football and not kicking it. It's a device. He's a sad sack."

Kinney didn't always intend to write about middle school life. After college, he wanted to be a newspaper cartoonist, but after sending out his work and receiving a pile of rejection letters, he says, he realized he didn't have the artistic talents to draw at that level: "So what I decided to do was write and draw as a seventh-grade boy, because that's where I maxed out." 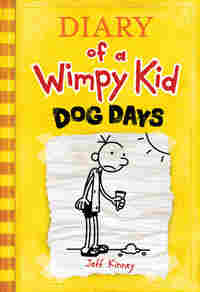 Kinney was also attracted to middle school for another reason: its inherent drama.

"The fact that you really and truly do have kids who are twice the size of other kids and at various stages of development — it feels like a dangerous place," he says. "I thought it was an unexplored or under-appreciated place for a comedy."

The books in the Wimpy Kidseries generally revolve around the various embarrassments Greg experiences at the hands of his family and school friends. In the first book of the series, a moldy hunk of sweet cheese acts as what Kinney calls "nuclear Cooties." Kids run up to touch the cheese, then chase each other, trying to pass on its germ. The incident is based on a memory Kinney has of growing up, when a Boy Scout made the smaller kids do push-ups into a piece of cheese.

Kinney, who describes his middle school self as an average kid who had his wimpy moments, says he draws on experiences from his past while writing: "When I was on the swim team, I used to hide out from my coach, and hiding out in one of the stalls, I would literally wrap myself in toilet paper so as not to get hypothermia. I keep thinking that that was where Greg Heffley was born."

As for the parents who complain that his books are too snarky, Kinney says, "My books are harmless and fun, and they get kids to read. If anything, I think that these books are turning kids on to reading, and they are going to move on to more legitimate reading in the future, and that's a good thing."

All Things Considered enlisted help from kids around the country for an interview with children's book author Jeff Kinney. Kinney writes the incredibly successful series Diary of a Wimpy Kid, about smart-mouthed middle-schooler Greg Heffley, who has only one real friend because he's, well, kind of a sad sack — think modern-day Charlie Brown.

Warning to those who have never read Diary of a Wimpy Kid: These questions come straight from our youngest listeners and Kinney's biggest fans. We received hundreds of e-mails from kids who wanted to have their questions answered for once! Kinney answers some of those questions below.

Many fans wrote to NPR wanting to know how Kinney came up with the characters' names:

GREG: I came up with the name Greg right away because my mom always wanted to have a son named Greg and she never did. So, I came up with a name to honor that kid who never came to be.

ROWLEY: Rowley is a name of a town in Massachusetts, and I thought that sounded right for that character. The name sounded a bit slow and innocent and pure.

MANNY: The first time I heard the name Manny, I didn't know it was short for Emmanuel. I thought it was a mom trying to make her child sound more masculine. So, I wanted to have this tiny little boy have this over-masculine name.

HOLLY HILLS: I think most boys have this object of desire at their school, and they all seem to have a name that is alliterative or special in some way, and that's why I chose Holly Hills.

FREGLEY: Fregley is just a name that I thought sounded like a kid who had freckles. And I think it's an unusual name. It's one I like very much. A lot of kids ask, "How did you come up with a character like Fregley?" And I say, "I think most people have a kid like Fregley on their street, a kid that's a little strange, and if you don't know any kids that are like Fregley, then you might be Fregley."

From Geoffrey Cochran, Burlington, Ky.: "I am a 9-year-old blogger who loves your books. Is Greg going to make any new friends besides Rowley? I think he should."

I think one of the fun things about Greg and Rowley is that their relationship is a suffocating relationship. He can't make any new friends because he only has Rowley and Rowley only has Greg. So, I'm afraid I'm going to let Geoffrey down.

From Greg Schieferstein, South Elgin, Ill.: "Why in the series The Last Straw do you show Greg in his tighty-whities on the front cover?"

Because a skinny kid in tighty-whities equals instant humor.

From Ethan Herbst, River Edge, N.J.: "My name is Ethan and I'm 7 years old and I want to know what happens to the muddy hand!"

Look under your bed tonight, and the muddy hand will be there waiting for you!

From Oscar and Sam Maxfield, Salt Lake City: "Did you ever get a laundry hoop for Christmas, like Greg did?"

I did! I got a clothes hamper one year for Christmas. I felt great about it. I had my very own hamper — there's power in ownership!

From Emma Coyne, Voorhees, N.J.: "Are you friends with any other children's book authors?"

I've gotten to know quite a number of children's book authors. I'm friends with Holly Black. She writes The Spiderwick Chronicles. And Rick Riordan — he writes the Percy Jackson series. And Jon Scieszka — he's written a lot of books, including The True Story of the Three Little Pigs.

From Matteo Agius-D'Arrigo, Coppell, Texas: "What kind of cheese is the stinky cheese?"

It's Swiss, because it has holes in it.

From Kenneth Raudales, Fort Mill, S.C.: "What is the funniest part in the books for you?"

Fregley's note to Greg is the funniest part in the book for me. Fregley has been terrorizing Greg by chasing him around during a sleep-over, and then Greg locks himself in the bathroom. So, Fregley slips a note under the door and it says, "Dear Greg Heffley, I'm very sorry I chased you with my booger. Here, I put it on this piece of paper so you could get me back."

From Aidan Hart, Dalton, Pa.: "Do you plan to write any books where Greg jumps out of an airplane with a parachute?"

I think that's a great idea! I'll be talking to my lawyer.

From Aliya Reames, Boise, Idaho: "Can you do anything to help NPR be more fun for kids to listen to?"

I used to have the same complaint before I started doing interviews on NPR. So, the best thing that Aliya can do is write a book and get herself on one of the programs to see if she can make it more fun. 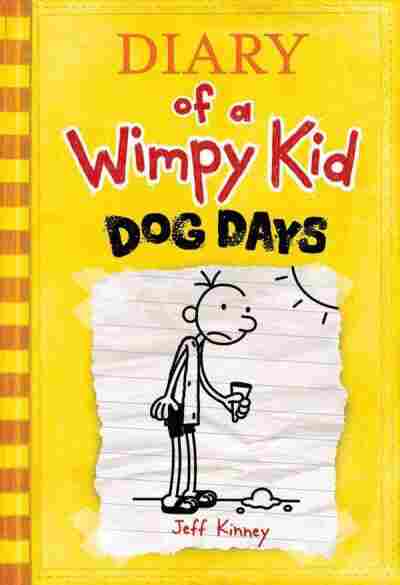