Accessibility links
Questions Linger Over Energy Star Ratings Energy Stars are those blue stickers that are supposed to help you choose the most energy-efficient appliances, TVs and other power-hungry gadgets. More than a third of Americans use them to pick products, but some flaws in the program have raised doubts about the ratings.

This story is part of a series called How Green Is It? that will air on All Things Considered. The series examines some of the things Americans are doing — and buying — to help the environment and whether those steps really are as "green" as they seem.

Energy Stars are those blue stickers that are supposed to help you choose the most energy-efficient appliances, TVs and other power-hungry gadgets. More than one-third of Americans use them to pick products, according to the Environmental Protection Agency, which runs the program with the Energy Department.

The government says Energy Star is working so well that last year it helped Americans save the same amount of greenhouse gas pollution as is produced by 29 million cars.

But for years, critics have pointed to several flaws in the program that raise doubts about the reliability of Energy Star ratings. For instance, side-by-side and French-door refrigerators can get Energy Stars even though they use a lot more electricity than do fridges with freezers on the top. That's because the government splits up various types of refrigerators into different categories and judges each separately.

"A shopper might feel good about buying an Energy Star side-by-side refrigerator, but it's kind of like buying an SUV and saying it's fuel efficient," he adds. 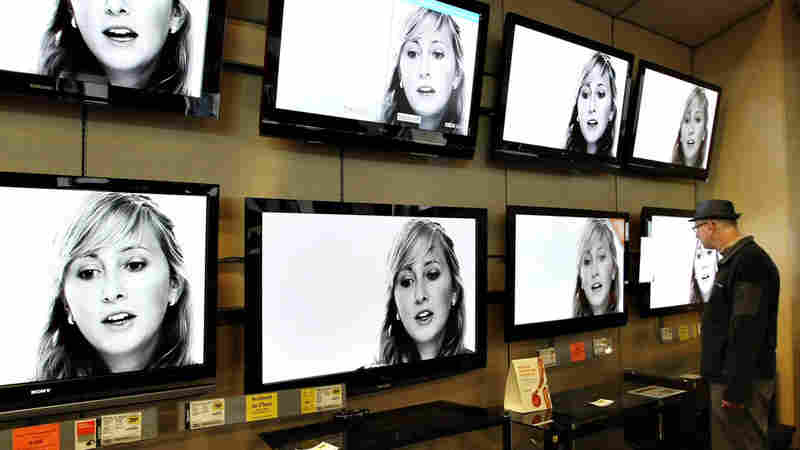 A customer looks at a display of televisions in a Best Buy store in San Francisco. California state regulators are currently considering ways to reduce the power consumption of flat-panel televisions. Justin Sullivan/Getty Images hide caption

More than 60 different kinds of products from air conditioners to light bulbs can get Energy Stars. The criteria for earning labels vary, but generally a product should be in top 25 percent in terms of energy efficiency.

However, critics say the program doesn't update its standards quickly enough, so at times the vast majority of the dishwashers, televisions or computers on the market display the stars.

"It doesn't have any meaning at that point," says Connelly. "The government needs to get its act together and raise the bar."

Another problem is that the government lets manufacturers test their own products, and sometimes the results are misleading.

For instance, when Consumers Union tested some Energy Star French-door refrigerators, it found they used 70 percent more power than the manufacturer claimed.

"What we came to see in our testing was that some of the manufacturers actually turned off the cooling to the ice and water dispenser, and by virtue of that were claiming to be Energy Star," Connelly says. "When in fact, were you to buy this product, you would use a lot more energy than was being advertised."

David Katzmaier, who tests televisions for the technology review Web site CNET, agrees that manufacturers sometimes game Energy Star. Last year, he was surprised to see that some large plasma televisions had earned the designation. When he tested those televisions himself, the pictures seemed awfully dim.

"You get that washed-out look to the picture, and that was definitely a tip-off to us," Katzmaier recalls.

A lot of the energy that televisions use goes to make them bright, and Katzmaier says manufacturers were setting the default modes on the sets unusually dim to qualify for stars.

"I think that some people might see that dim standard mode and turn up the brightness on their televisions and all of a sudden your TV isn't Energy Star-compliant anymore and you're really not saving any power," Katzmaier says.

Katzmaier says many people are using more electricity to watch their favorite programs and play video games than they did in the past, even when they buy Energy Star TVs. That's because people are buying much larger televisions to replace their old 27-inch box TVs.

Supersized TVs are just one reason that even with hundreds of millions of Energy Star products in American homes, average families are using more electricity than ever. People are plugging in more appliances and electronics all the time. Energy Star wasn't designed to attack that problem.

"What we didn't predict was people's insatiable appetites for gizmos," says Cathy Zoi, who helped launch Energy Star in 1992 and now heads up the program at the Energy Department.

This week, the Energy Department's inspector general released a report that agreed with some of these criticisms. It found that the department has not verified that products with the Energy Star label actually meet the specifications for earning the rating. And it called for a better testing program to ensure that products live up to their promised energy savings.

The department has already begun responding to the critics. It has announced it will make it harder for those large-screen TVs to earn the Energy Star label. Last month, it agreed with the EPA to require tougher testing standards. And the two agencies are considering creating an Energy Superstar program to identify the top 5 percent of products.

It has also signed up Dr. Seuss' most ardent environmentalist, The Lorax, to help encourage the next generation to help save the planet.