Accessibility links
Scientists: Biofuel Laws May Harm Environment Researchers writing in the current issue of Science believe they have found an error in existing biofuel laws that could actually make climate change worse. They say these rules inadvertently encourage deforestation, which in turn contributes to global warming.

On Friday, the Environmental Protection Agency is expected to give a price tag for the Senate's global warming bill. That will frame next week's scheduled debate on the legislation. 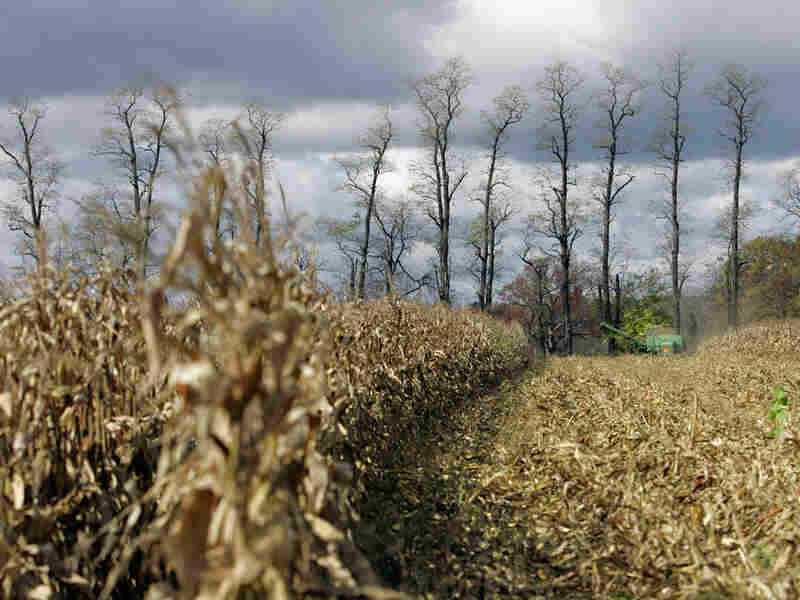 A farmer harvests corn on a farm near Spring Mills, Pa. According to current biofuel laws, if you burn ethanol from corn in your car, the government doesn't count the carbon dioxide that comes out of the tailpipe as an actual carbon emission. Carolyn Kaster/AP hide caption 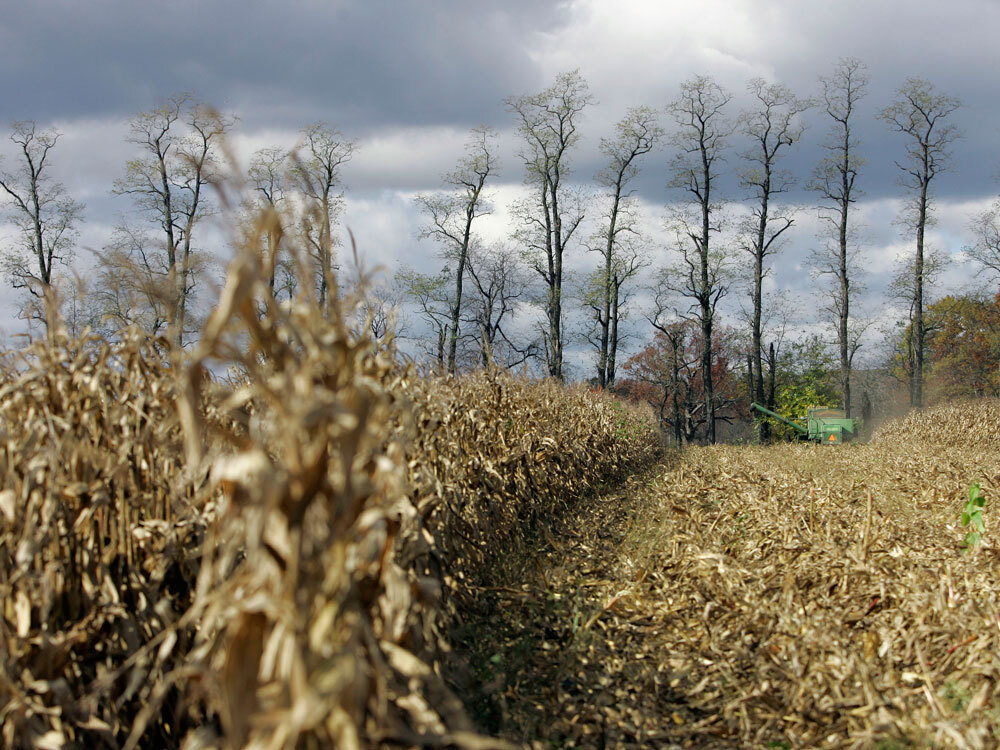 A farmer harvests corn on a farm near Spring Mills, Pa. According to current biofuel laws, if you burn ethanol from corn in your car, the government doesn't count the carbon dioxide that comes out of the tailpipe as an actual carbon emission.

One key part of the climate bill has to do with fuels made from green plants. These can reduce the use of fossil fuels, and they also are a big draw for farm-state votes.

But scientists writing in the current issue of Science magazine point out a huge error in existing biofuel laws that could actually make climate change worse. They say these rules inadvertently encourage deforestation, which in turn contributes to global warming.

Something Doesn't Add Up

If you burn ethanol from corn in your car, the government doesn't count the carbon dioxide that comes out of the tailpipe as an actual carbon emission. That's because they figure the corn plant originally took that carbon dioxide out of the air, so you're just putting it back.

But 13 prominent scientists writing in Science says that's bad logic when it comes to many types of biofuels. Author Tim Searchinger of Princeton University offers an extreme example to make the point.

"Even if you were to cut down the world's forests and turn them into a parking lot, and take the wood and put it in a boiler — which obviously releases enormous amounts of carbon from the trees — that is treated as a pure way of reducing greenhouse gas emissions," Searchinger says. "And that's obviously an error."

And that error isn't trivial. It's now enshrined in European law as well as the Kyoto climate treaty.

Forests Worth More Dead Than Alive

Searchinger explains that in an effort to avoid double-counting carbon emissions, the treaty negotiators ended up with a system that never counts them at all.

And he says the climate bill that passed the U.S. House of Representatives earlier this year makes basically the same error, though at the moment, the Senate bill does have forest safeguards in place.

As a result of this accounting error, countries trying to reduce their carbon emissions actually have an incentive to cut down forests and burn them up or replant the area with biofuel crops. In fact, Searchinger says power plants in Northern Europe are starting to chip up wood and burn it for energy in the name of reducing emissions.

"The fundamental effect of this flaw is to make forests worth more dead than alive," he says.

This spring, another report in Science pondered what would happen in the coming decades if biofuel carbon was never counted as an emission. Jae Edmonds of the Pacific Northwest National Laboratory says they calculated that almost all the world's forests would be chopped down by the middle of this century.

"You can't actually imagine this going on like this with no one noticing and nobody stepping in to intervene," Edmonds says. "But the numerical experiment is instructive in that it takes the phenomenon into sharp relief."

Searchinger says the good news is that it's easy to fix the problem. Nations simply need to count all carbon dioxide coming out of tailpipes and smokestacks, regardless of the source. Then, if the source of the biofuel is a destructive source, like deforestation, there would be no carbon emissions credit. But if it is from a good source, like plants grown on previously barren land, that would earn a carbon credit.

"There are substantial amounts of bio-energy we can make, that do give us greenhouse gas benefits," Searchinger says. "What we don't want to do is create a false and perverse incentive simply to clear the world's forests."

Whether this new accounting scheme would affect the domestic biofuels industry is debatable. Bob Dinneen, president of the Renewable Fuels Association, says it shouldn't matter.

"Some of the points that have been made in the [research] paper today, we agree with," Dinneen says. "You should never, under any circumstance, tear down a forest for the growing of a biofuel."

But some scientists argue that the domestic biofuels industry does, indirectly, lead to deforestation in the tropics, by raising the global price of corn and encouraging farmers in South America to clear land to plant grain.

Edmonds, of the Pacific Northwest National Laboratory, says that if we could place a cash value on preserving forests, that ends up being good for the atmosphere.

"You don't end up not producing quite as much biofuels," he says, "but you don't need as much because you don't have to make up for the deforestation."

The real challenge now, Edmonds says, is figuring out how to put a new carbon accounting scheme into practice.