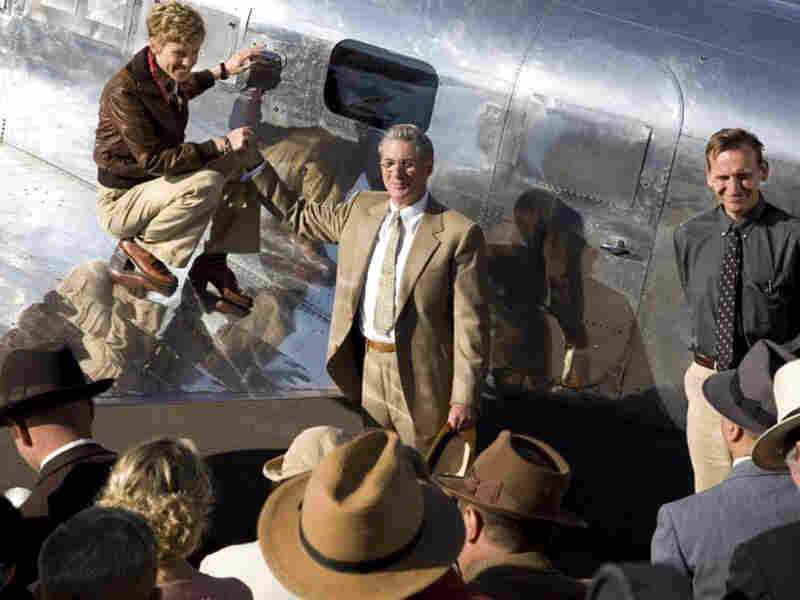 Amelia (Hilary Swank, with Richard Gere) becomes a national fixation. She struggles to maintain her independence despite the attempts of others to profit from her image. Fox Searchlight Films hide caption 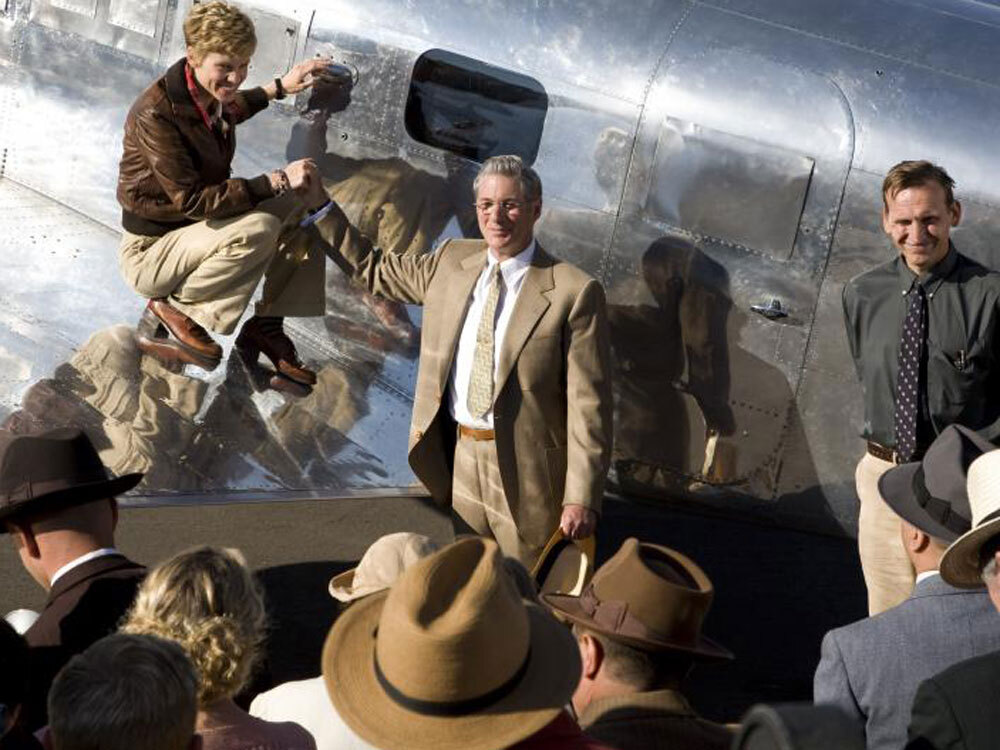 Amelia (Hilary Swank, with Richard Gere) becomes a national fixation. She struggles to maintain her independence despite the attempts of others to profit from her image.

'If You Miss That Island'

'I Was Aiming For Paris'

The life of Amelia Earhart is so endlessly resonant, so rich in mystery and irony that it's hard to forgive the makers of the biopic Amelia for getting her spirit dead wrong. The facts are all here, but the movie is a blueprint — it never breathes.

Welcome to biopic country, where every line's a billboard.

After that, the film leaps back and forth between that flight — which, of course, was Earhart's last — and the years leading up to it. When Earhart passes over giraffes in Africa, she marvels, "Look how free they are... No schedules to keep!" Then, in a flashback, she has to deal with schedules, with people who want things from her, like Richard Gere as the publisher Putnam, who begs her to marry him. "I want to be free, George," she writes in one of many voice-overs from her letters, "to be a vagabond of the air."

The plane soars, sheep part in its wake and Swank gazes in vagabond wonderment, remembering herself as a little girl on a horse in a field racing a prop plane. "I had to fly," she narrates. It's the difference, she says, between a life of three dimensions and, "a life imprisoned in safety."

The movie is imprisoned in safety. The script by Ron Bass and Anna Hamilton Phelan makes gestures in the right direction. It touches on the most modern aspect of Earhart's story: that from the get-go the image of this would-be free spirit was marketed like crazy. Putnam functioned as Earhart's Madison Avenue Svengali, although the filmmakers can't bring themselves to condemn him. He's a tender father/lover who just happens to want Amelia to make money. This is America, he keeps reminding her, and it's dollars that allow her to fly.

But Amelia boasts some of the most horrific examples of biopic dialogue I've ever heard. When Amelia can't decide what to do about her adulterous love for Gene Vidal, played by Ewan McGregor, he says, "Just ask yourself," and Amelia says — "I'm not sure who that is anymore."

This is a very dull triangle: Amelia, Putnam, and Vidal, whose little son Gore is comforted by Earhart when he's scared of some tiger wallpaper. The conflict comes to a head when the three debate the safety of the final leg of that around-the-world flight.

The navigator, Fred, is an alcoholic played by Christopher Eccleston, who has more chemistry in his brief scenes with Swank than either Gere (who's trying to dampen his sex appeal) or McGregor (who jiggles his head like a parody of a handsome man). But then, Swank rarely has chemistry with other actors. In her best performances, she has a gift for pulling you into her characters' heads, for making their dreams almost tactile. She has certainly transformed herself. I'm not sure if her teeth have been artificially enlarged or she has lost so much weight that there's nothing left of her but cheekbones and choppers — all sharp angles with a dash of androgyny. But the movie has no texture for her to play off.

A director like The Hurt Locker's Kathryn Bigelow might have lightly fetishized the planes so that you felt in your bones why Earhart had to put herself in the air. But Mira Nair has no connection to this material. The only emotion is in Gabriel Yahred's old-fashioned romantic score, which ladles on the strings.

Apart from a great scene with a stout, throaty Cherry Jones as Eleanor Roosevelt, the only time Amelia even has a present tense is in the last 10 minutes, when Earhart is over the ocean and running out of fuel. What a horrible irony: The story of this great American female icon comes to life only when she's on the brink of death.