Accessibility links
At Great Lakes, Tom Hanks Gets Back To His Roots The star of The Da Vinci Code and Toy Story visits the Cleveland theater where he got his professional start to speak with host Scott Simon about his early years in theater — and the ups and downs of working in the movies. 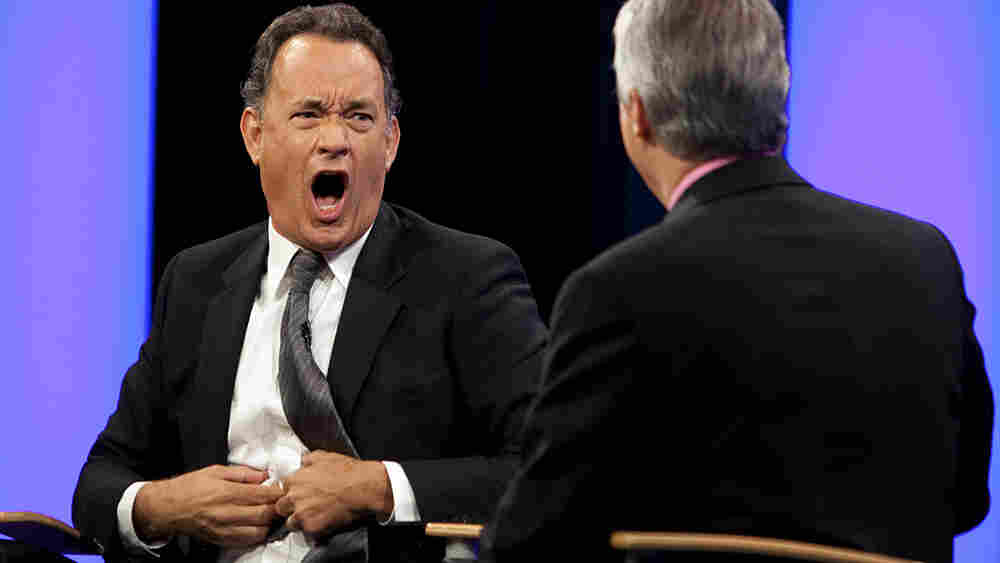 In a lively conversation with Scott Simon for the public TV series Backstage With ..., Tom Hanks took on the perils — and pleasures — of fame. An hourlong version of the interview will be broadcast in January 2010 on many PBS stations. WVIZ/PBS Ideastream hide caption

Tom Hanks' career has taken him to the shores of Normandy, a deserted island in the Pacific, and the bowels of the Vatican, but last week, Hanks found himself in familiar surroundings: on a stage at the Great Lakes Theater Festival in Cleveland. 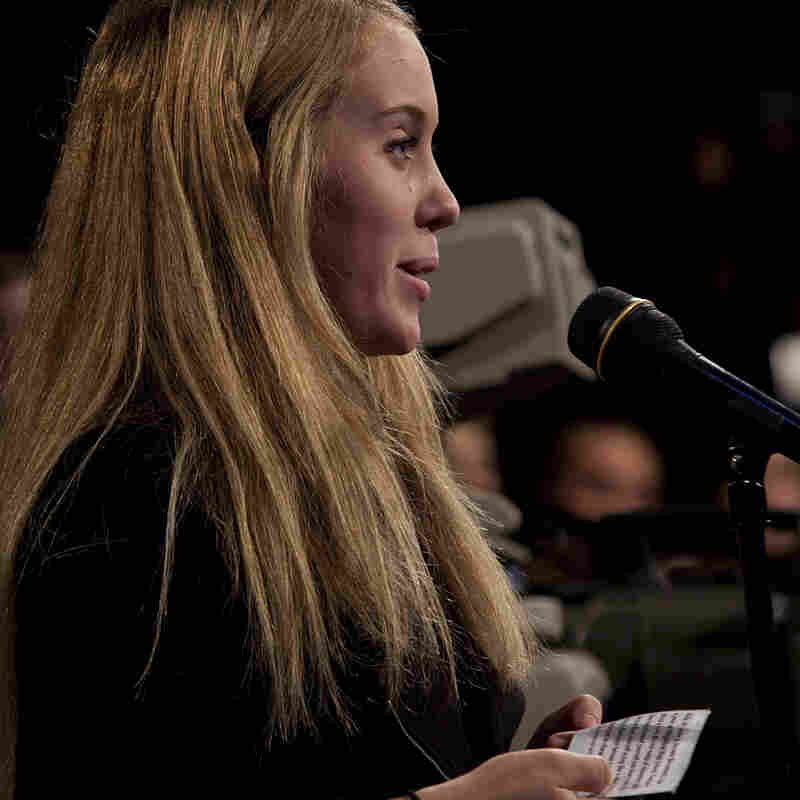 Student Jeremie Beverstock asked Hanks if he ever takes his characters home with him — and got a frank answer. WVIZ/PBS Ideastream hide caption 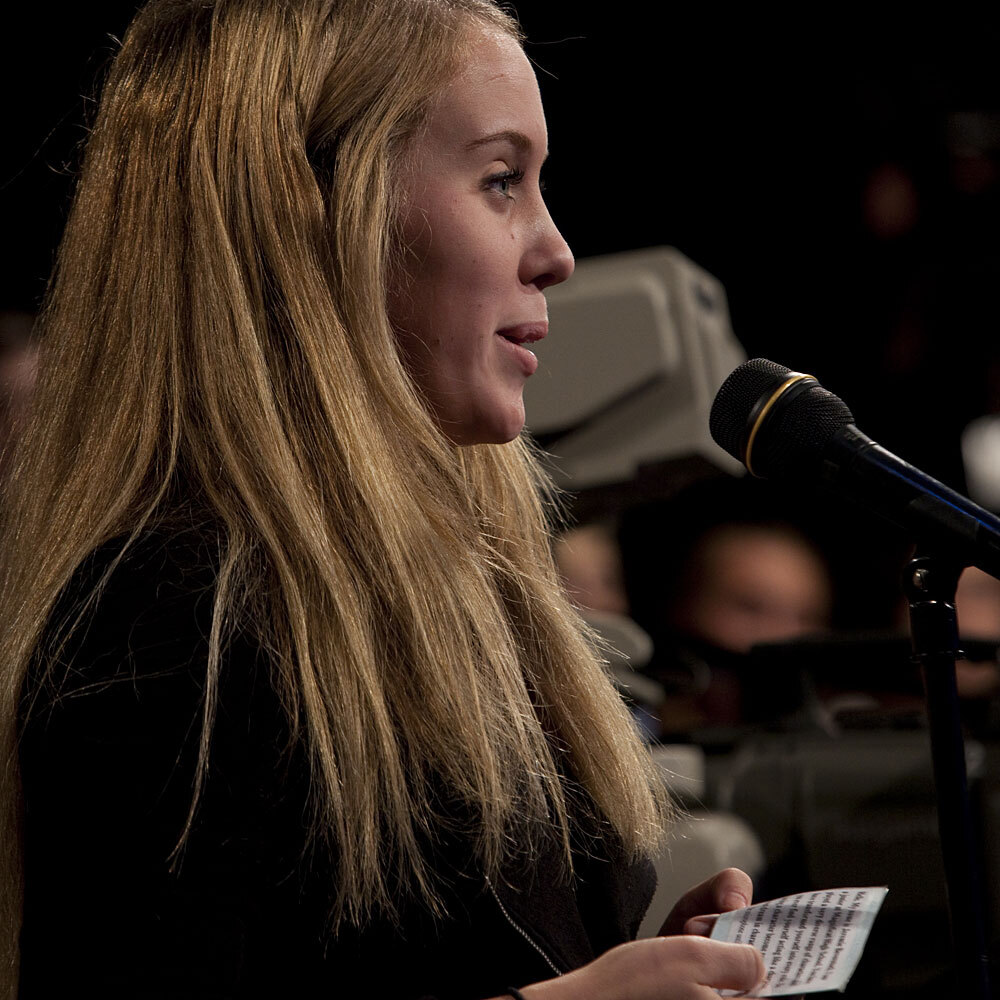 Student Jeremie Beverstock asked Hanks if he ever takes his characters home with him — and got a frank answer.

Scott Simon interviewed Hanks for a benefit audience at Great Lakes, where Hanks got his start as a working actor. But as Hanks explained, when he began his first stint with Great Lakes, he wasn't hired to be onstage. Instead, he worked behind the scenes — sometimes until the wee hours of the morning — all in hopes of earning the chance to speak just one line onstage.

And it wasn't always deathless prose.

"Sometimes the line was, 'What from the cape can you discern at sea?' " Hanks recalled. "What else are you going to do? When you don't have any money in your pocket, and you're on the west side of Cleveland, you might as well go down to the theater and change over the sets 'til 2 o'clock in the morning."

As Hanks took questions from the high school students in the audience, Jeremie Beverstock — of Magnificat High School in Rocky River, Ohio — asked if he ever finds himself taking his work home.

On The Perilous Thrills Of Voice-Over Work

On Being Famous: 'Here's A Free Pair of Shoes!'

"You've played a very diverse range of characters and have really transformed yourself into every role," she said, "so I was wondering if you ever find yourself acting like one of your characters, or having a character become part of your identity — or even dreaming in character."

Turns out Hanks does.

"Doing Apollo 13, I got to walk around in really cool spaceman uniforms, you know, with patches on them and stuff like that," Hanks said. "I could swagger a little bit. And I think I probably came home and was acting like Jim Lovell a little bit too often. I was told in no unqualified terms to knock it off."

But Hanks said that immersing yourself in a role is part of what's fun about acting. Not, of course, that his job is otherwise unpleasant. Shooting the baseball comedy A League of Their Own in Indiana, he remembered, wasn't exactly hard labor.

"I drank beer, ate hot dogs and played baseball all summer long," Hanks confessed. "It was very hard to get back into real life after spending that kind of summer. Every now and again I'd get together and say some lines with some of, you know, the girls, but all the rest of the time I was just laying around in the grass. It wasn't even like working it at all. I can't believe they paid me to do that."

In the audio version of this story, Tom Hanks tells Scott Simon about his lifelong fascination with space travel, about celebrating his birthday in the Louvre on the set of The Da Vinci Code and about the awkwardness of playing volleyball after filming Castaway. Click the Listen button at the top of the page to hear the full story.