Accessibility links
Rethinking Flight Safety With Air Bags In Planes Even in major airplane mishaps — like planes running off runways or landing on the Hudson River — passengers can walk away unharmed if they're properly protected, safety experts say. Air bags, standard in autos for decades, are now beginning to make their way into airliners as well. 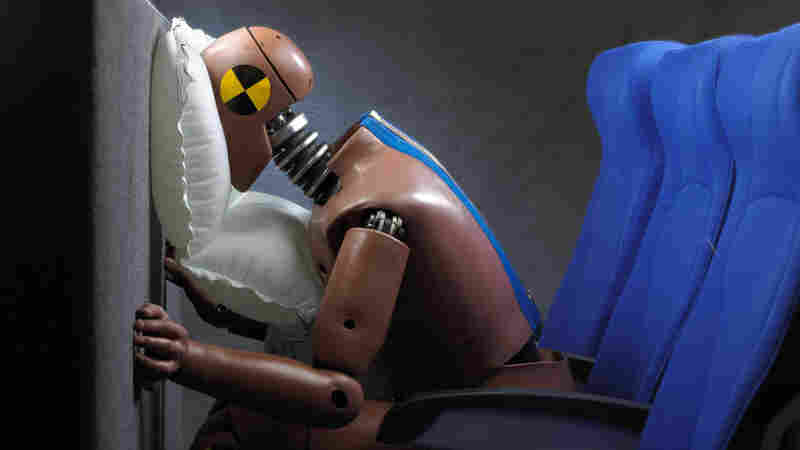 AmSafe, which makes most of the seat belts used on planes, sells belts with air bags attached. Courtesy of AmSafe hide caption 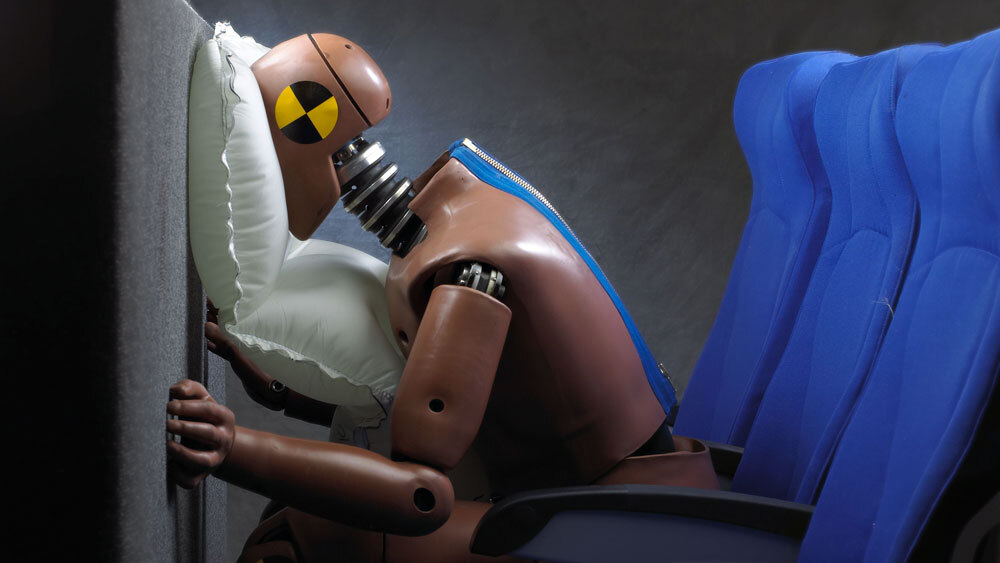 AmSafe, which makes most of the seat belts used on planes, sells belts with air bags attached.

There was a time — maybe 25 years ago — when the idea of putting air bags in planes would have been seen as pointless. For decades, aviation safety focused mainly on avoiding accidents on the theory that if a crash occurred, nobody could survive anyway.

But more recently, safety experts have discovered that even in major mishaps — like planes running off runways or landing on the Hudson River — passengers can walk away unharmed if they're properly protected. And that's where air bags can help.

AmSafe makes most of the seat belts used on planes, and increasingly, the company has been selling belts with air bags attached. AmSafe is supplying the product to most major U.S. airlines to help comply with a new government crash standard. The rule has been phased in slowly over the past 21 years and takes full effect this week, when the seats in newly manufactured planes will have to protect passengers from a crash 16 times the force of gravity. That's roughly what you might experience in a head-on car wreck at a moderate speed.

At AmSafe's factory in Phoenix, workers assemble the air bags. They load a deflated air bag into a narrow pouch on top of the belt, and attach it to a trigger mechanism and a helium-filled inflation device hidden under the seat.

"The air bag seat belt looks pretty much like a standard seat belt," says Tom Barth, research director for AmSafe. The air bag is sewn onto the webbing and has a decorative cover. "People don't really notice that it's there," Barth says.

John Hickey, a top official at the Federal Aviation Administration, says the new standard is an improvement over the former requirement of nine-times-gravity force, which he says didn't provide adequate protection.

"We were seeing accidents that, sure, some of them were terrible catastrophes and there was never going to be a survivor," Hickey says. But many of the accidents were of the nature that people were still in their seat, and maybe if was a little bit stronger, that person could have survived." 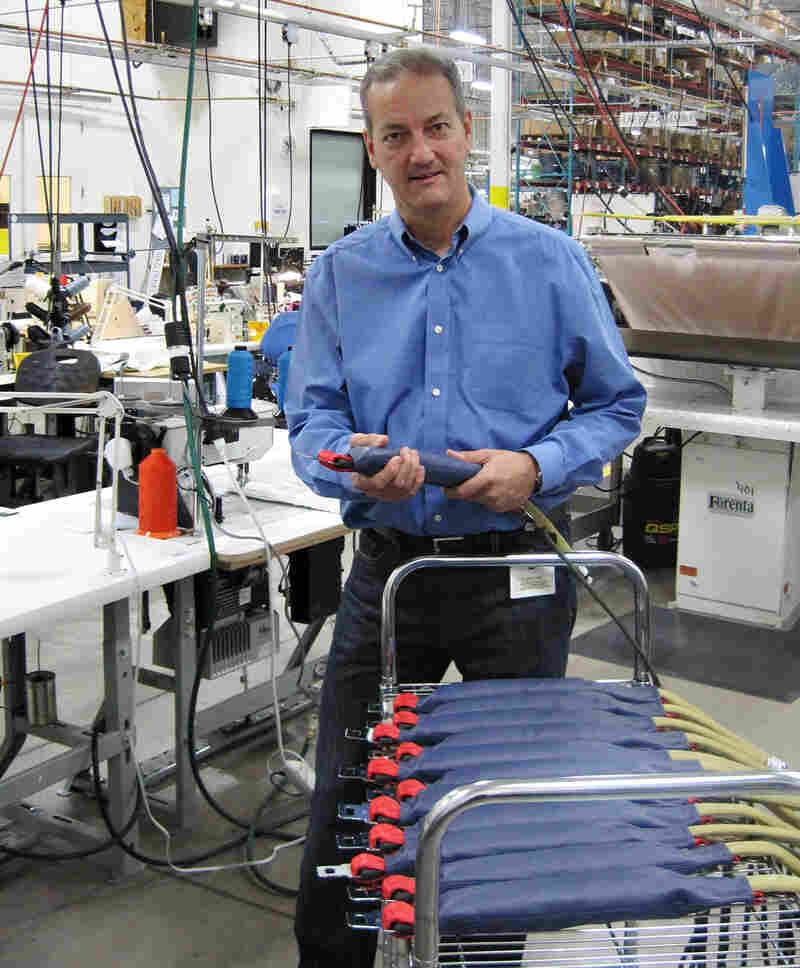 Bill Hagan, an executive with AmSafe Aviation, holds the airplane seat belts outfitted with air bags. These air bags are designed to protect people from a severe crash. Courtesy of AmSafe hide caption 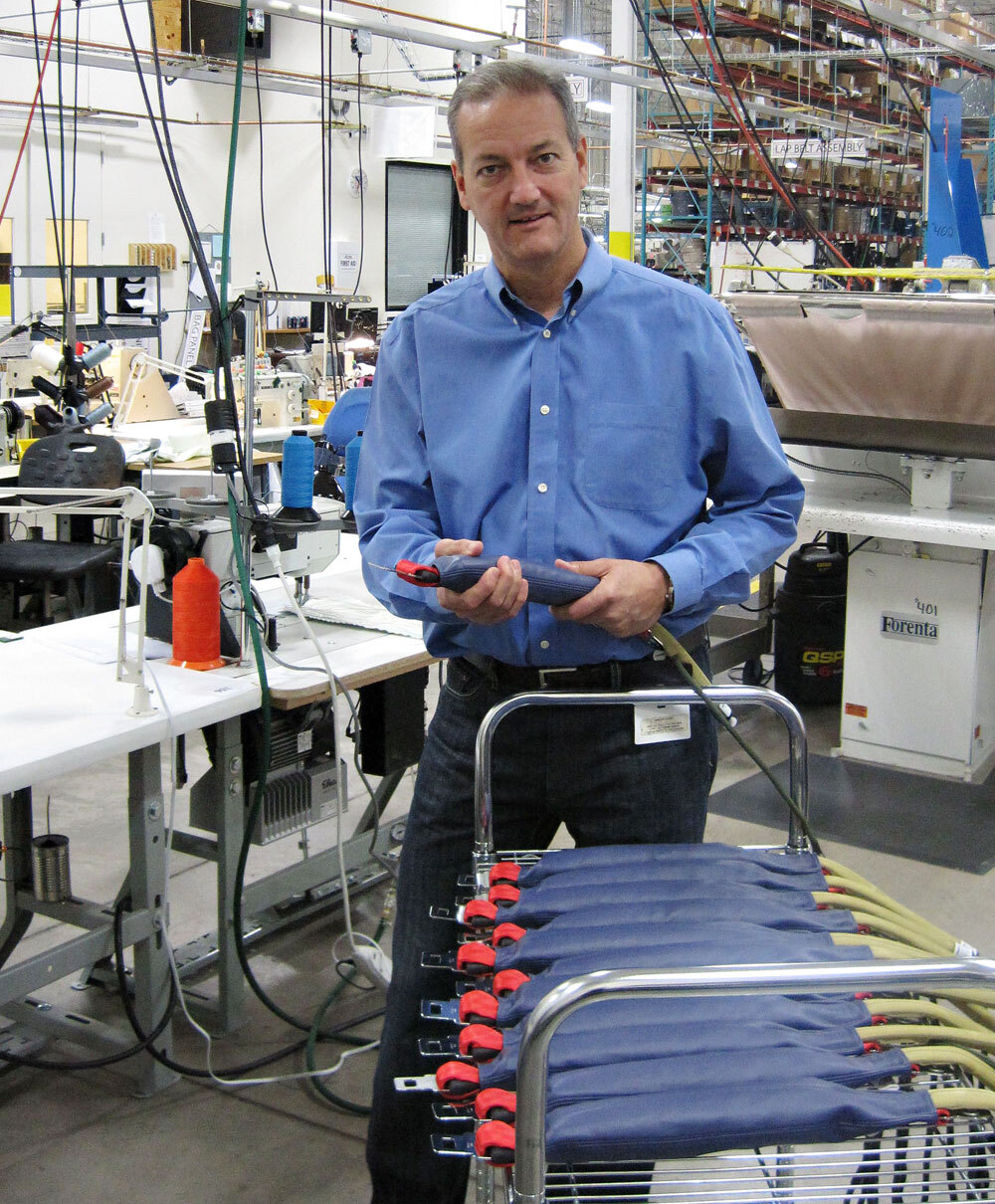 Bill Hagan, an executive with AmSafe Aviation, holds the airplane seat belts outfitted with air bags. These air bags are designed to protect people from a severe crash.

Hickey says air bags are just one of several methods airlines can use to comply with the rule, and only a few seats on the typical plane would need them. They're unnecessary, for instance, in most of the coach cabin, because airlines are installing sturdier seat-backs, which serve as an adequate cushion in a collision.

Other seats — in especially spacious configurations — comply with the standard simply because there's nothing in front of them a belted passenger could hit. But bags often are used in places like the bulkhead — the wall at the front of the cabin — where a crash could throw passengers into a hard surface.

At AmSafe, there's a special room where two crash-test dummies sit in a mock-up of an airplane cabin. The dummies hit the bulkhead at a force of 16 Gs. Bill Hagan, executive vice president of AmSafe and president of AmSafe Aviation, assesses the test results. "The occupant in the right-hand seat was wearing just a regular two-point seat belt. And if you look at the bulkhead in front of him, you can see a tan mark where his head struck and skidded on the bulkhead," he says. "So that's just not survivable. And the occupant on the left has the seat belt air bag, and never touched the bulkhead."

Hagan says about 1 percent of the world's commercial aircraft seats now are equipped with air bags, a number he says will increase as airlines replace older planes. Each of the devices costs about $1,200, compared with just $35 for a standard seat belt.

But Hagan says they're worth the price. Though an air bag never has deployed on a commercial flight, he says several have gone off in private plane crashes and he credits them for saving 14 lives.