Accessibility links
Toxic Chinese Drywall Creates A Housing Disaster Between 2004 and 2007, an estimated 100,000 homes in more than 20 states were built with toxic drywall imported from China. It's being called a "silent hurricane" because emissions from the drywall destroy plumbing and electrical systems. The Gonzalez family moved out of their home because of drywall problems. 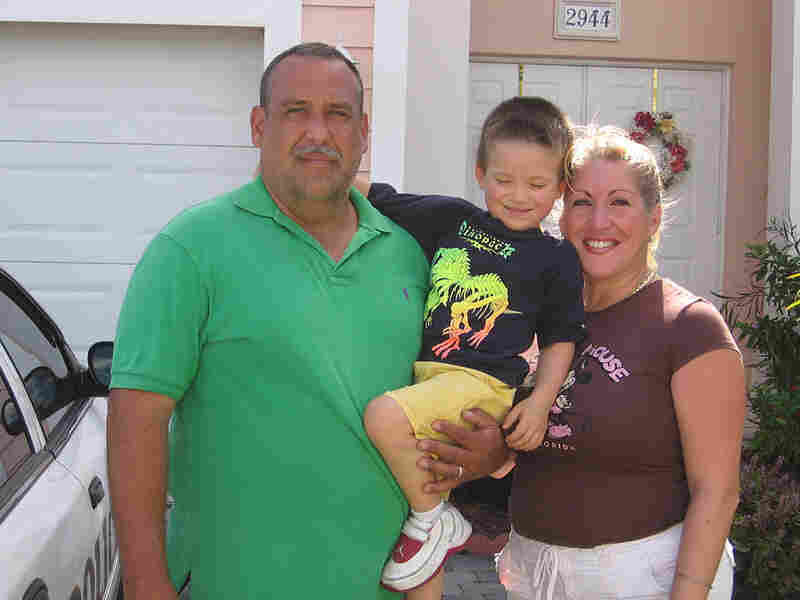 The Gonzalez family — Luis, Carrie and their 3-year-old son, Luis Andreas — moved out of their house in Homestead, Fla., and are now renting an apartment because of problems associated with toxic Chinese drywall. Greg Allen/NPR hide caption 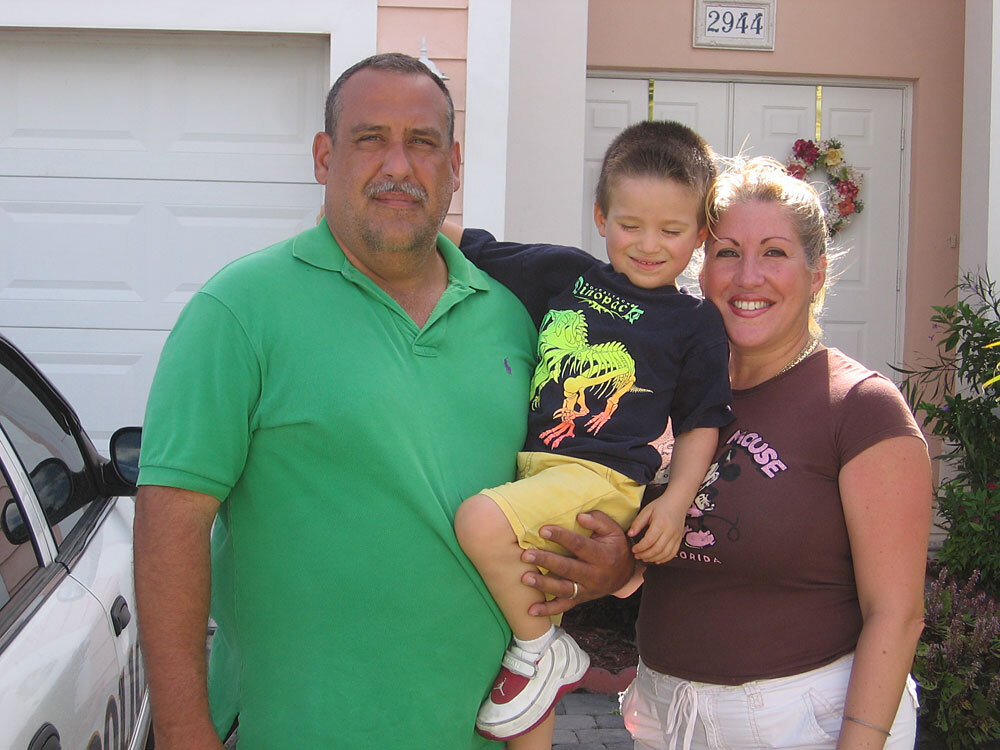 The Gonzalez family — Luis, Carrie and their 3-year-old son, Luis Andreas — moved out of their house in Homestead, Fla., and are now renting an apartment because of problems associated with toxic Chinese drywall.

Along the Gulf Coast and across the country, it's being called a "silent hurricane." Between 2004 and 2007, an estimated 100,000 homes in more than 20 states were built with toxic drywall imported from China.

Emissions from the drywall corrode plumbing and electrical systems. Homeowners also blame them for headaches and respiratory ailments. Replacing Chinese drywall in the United States could cost $15 billion to $25 billion, according to National Underwriter, an insurance industry publication. The estimate, derived by consultants Rachel Boles and Ronald Kozlowski, factors in the cost of replacing drywall, as well as legal fees, the toll on health and other costs.

In Florida, Louisiana, North Carolina and other states, thousands of homeowners have had an experience like Luis Gonzalez.

Last year, when Gonzalez and his wife, Carrie, moved into their new home in Homestead, Fla., they noticed an odor. They thought it was because it was a new house and had been closed up for a year before they moved in.

But after living there for several months, Gonzalez became suspicious.

"The smell continued, as much as we cleaned and did stuff, it's still there in the house," he says. "And, then I heard about this Chinese drywall. I started to check on the electrical outlets and the air conditioners. And that's when I noticed everything was turning black."

Throughout the home, there's a slight sulfurous smell in the air, sort of like a burned match. Walking upstairs, Gonzalez goes into a bathroom and opens a cabinet under the sink. "You see all the piping? It's black. Copper piping — black, all the way through." 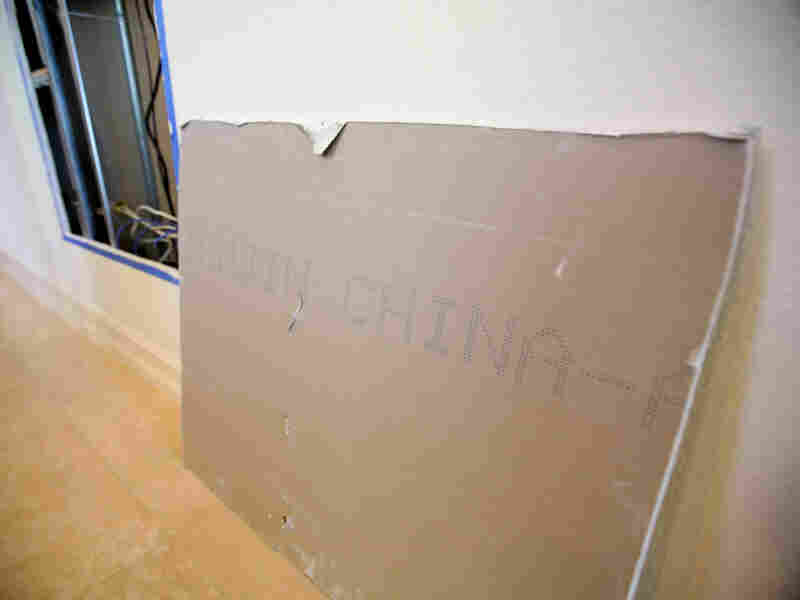 A large chunk of Chinese drywall from the Alfonso Sanchez home in Davie, Fla., leans against the wall of his house. J Pat Carter/AP hide caption 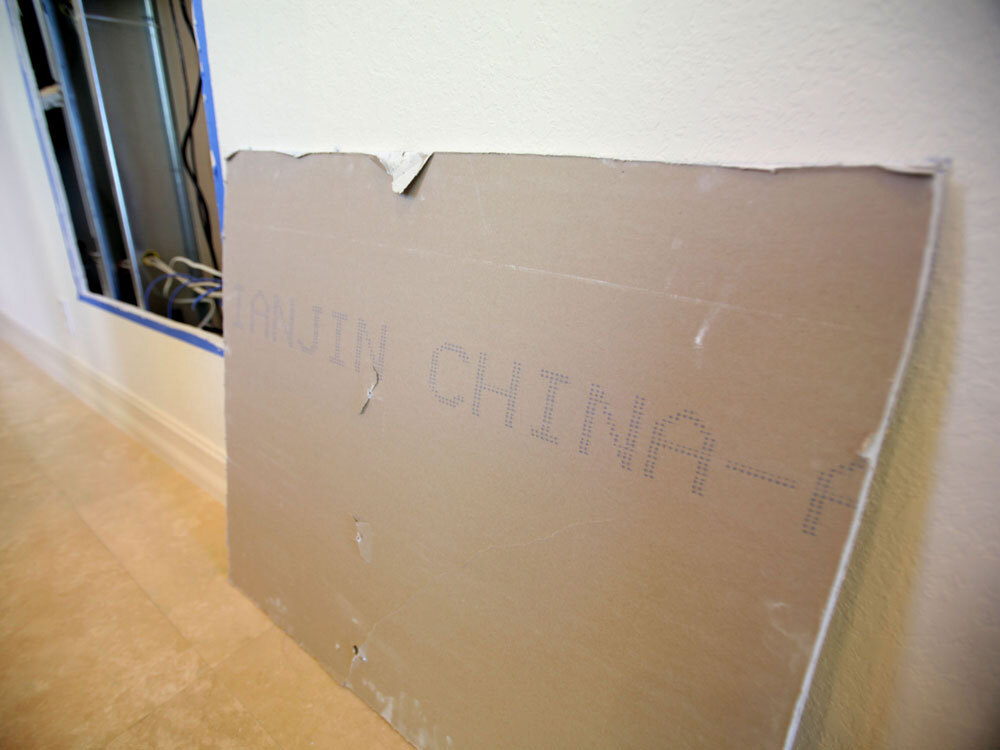 A large chunk of Chinese drywall from the Alfonso Sanchez home in Davie, Fla., leans against the wall of his house.

That discoloration of copper, brass and other metal surfaces is one of the telltale signs of toxic drywall.

The problem began to emerge about a year ago. Tests found that Chinese drywall imported during the peak years of the building boom emits sulfide gases. The gases corrode copper coils in air conditioning systems and wiring in appliances and electrical outlets.

Those are the known effects. Federal and state health officials are trying to determine what the health effects might be for people who live in houses with the toxic drywall.

Outside his house in Homestead, Gonzalez holds his 3-year-old son, Luis Andreas. Gonzales is a burly man, an officer with the Miami Gardens Police Department. All three members of his family have been treated for health problems they worry may be related to the drywall.

About three weeks ago, they moved out of their house and took an apartment. Now, Gonzalez is wondering how to pay rent and, at the same time, a mortgage for a house they can't live in.

No Sympathy From A Lender

He says he called the bank and asked for help. "I asked them to please hold on for six months because I cannot afford to pay this mortgage and pay rent elsewhere," Gonzalez says. "It's just not in my budget as a police officer; I don't make that much money. So, I was hoping they would help me. And they're not willing to help."

Gonzalez is concerned that if he's not able to make his mortgage payments, he may end up facing foreclosure.

"I make the analogy that it's like a small wave on the horizon," Durkee says. "And this small wave, if not corrected, is going to continue to get bigger and bigger and bigger, until it hits the shores of Florida like [a] tsunami."

Gonzalez says he just wants the problem fixed. He's hoping his builder may respond to threats of a lawsuit and replace all the defective drywall in his house — a job that typically costs $80,000 to $100,000.

A Threat To The Mortgage Industry

It's not just builders and homeowners who stand to be hurt by the growing number of houses found to have Chinese drywall. The toxic homes also pose a looming threat to the mortgage industry.

Durkee says that for the banks that hold the mortgages, these homes with Chinese drywall are literally toxic assets.

"We're going to have hundreds if not thousands of foreclosed homes that have this defective condition," he says. "The banks don't want that, the government doesn't want that, and these victims don't want that. So, we need to make sure that this safety net is fixed."

Some builders have stepped forward and begun replacing the defective drywall. But thousands of homeowners have turned to the courts. Many of the cases are before a federal judge in New Orleans who plans to begin holding trials in January.

Michael Ryan is an attorney who represents more than 250 homeowners with drywall claims. He says while the courts will eventually sort out who's liable, many homeowners won't be able to wait that long.

"It's horribly complicated," he says. "What we really need is a federal response here to save these homeowners and to save, frankly, the building industry. Otherwise, we're going to see widespread bankruptcies on both sides."

The Consumer Product Safety Commission is due to release the results of its investigation of Chinese drywall, and that may clear the way for further federal action.

In Louisiana, state officials are moving ahead with a plan to use $5 million in federal housing money to help homeowners replace their tainted drywall. Sen. Bill Nelson (D-FL) has sent a letter to state legislators, asking them to see if a similar program could be adopted in Florida.