Accessibility links
'The Onion': Mocking All Who Deserve It Since 1988 America's Finest News Source has released a book celebrating its 21 years of satire (with a wink). Onion editors Joe Randazzo and Joe Garden talk with Renee Montagne about the serious business of being funny. Also: See the fun The Onion has had at NPR's expense.

A Little Fun At NPR's Expense

Over the years, The Onion has had plenty of fun at public radio's expense. Here are a few stories that made us chuckle:

By the time a headline makes it to the front page of The Onion, it has already beaten out up to 800 other headlines vying for the same spot of treasured comedic real estate. So the headlines that made yet another cut — to be featured in The Onion's latest book, Our Front Pages — are pretty much the cream of the satirical crop.

The ironically self-important tome (it's more than a foot tall) promises to entertain readers with "21 Years of Greatness, Virtue and Moral Rectitude" culled from the archives of America's Finest News Source.

"The headlines come from long periods of desperation, boredom and a fleeting panic that we have to get our assignment done in time for the Monday meeting," explains features editor Garden.

"I've even talked to writers who've told me that it's an obsession," says Randazzo. "Nearly everything that they see, think or do gets instantly reframed into this kind of headline." 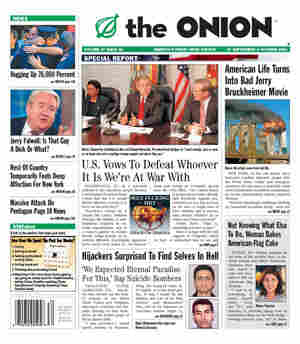 Click to see the post-Sept. 11 issue of The Onion. (NOTE: Includes language that some readers may find offensive.) hide caption 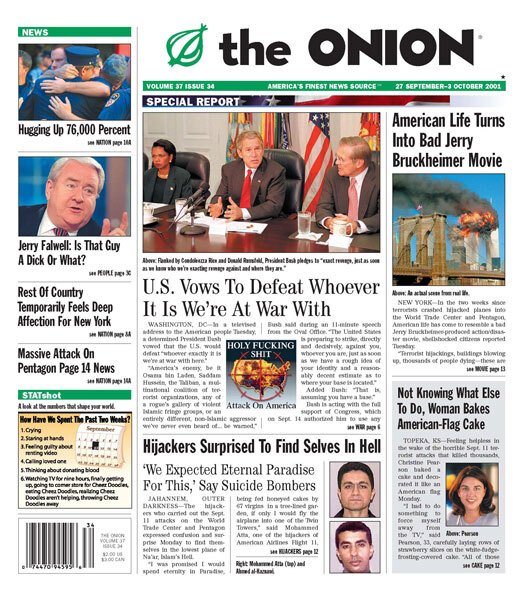 Click to see the post-Sept. 11 issue of The Onion. (NOTE: Includes language that some readers may find offensive.)

So The Onion's stories end up running the gamut from observations about the little injustices of everyday life (Chipotle Employee Just Gave Guy In Front Of You More Rice) to sobering commentary on global events (Hijackers Surprised To Find Selves In Hell).

(Garden says he initially thought that the hijacker headline — which appeared in the issue of The Onion that came out immediately after Sept. 11 — was "too pandering," but it turned out to be a popular and "cathartic" story.)

The Onion's post-Sept. 11 issue led with the headline U.S. Vows To Defeat Whoever It Is We're At War With. It ran alongside Not Knowing What Else To Do, Woman Bakes American-Flag Cake and Hugging Up 76,000 Percent.

There are no truly untouchable topics, Randazzo says. But if the editors choose to tackle a sensitive subject, they try to make sure they aren't "just making jokes about horrible things with no context or no point or no heart."

As for whether The Onion has a moral or political ax to grind, Randazzo doesn't think so.

"I would not say that we are a group of Republicans, but I don't think we're a group of really left-wing liberals either," he says.

It's equal-opportunity mockery, really, Randazzo explains: "We see something ... and say, 'Well, that's kind of stupid. They're acting kind of stupidly here. We should make a joke about that.' " 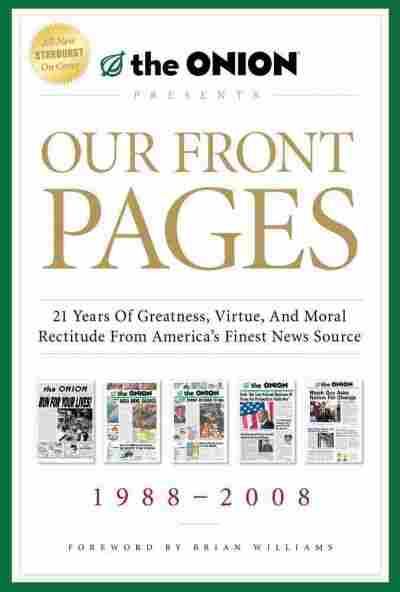