Accessibility links
No Visa Needed For Good Cuban Food With Congress considering relaxing its nearly 50-year-old restrictions on travel to Cuba, many Americans are salivating at the prospect of visiting the forbidden island. But a taste of Cuba can be found much closer to home — in your own kitchen. 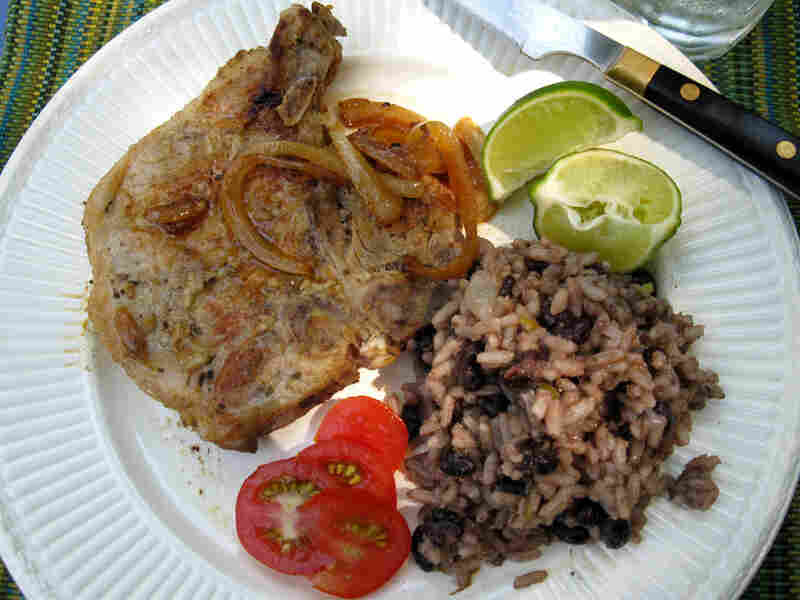 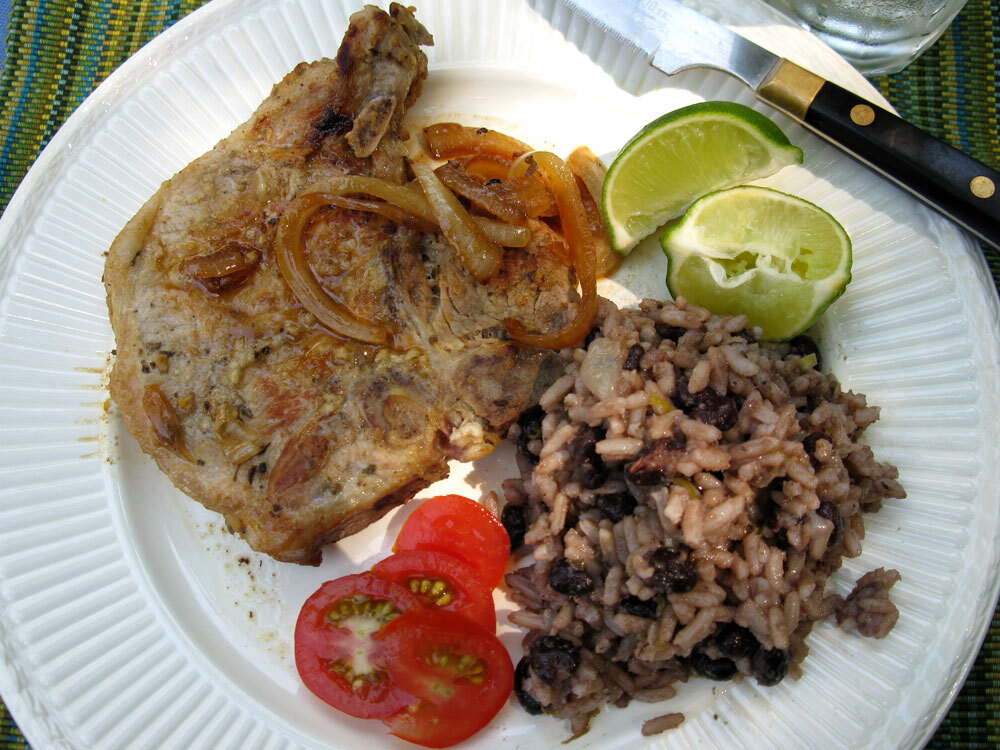 With Congress considering relaxing its nearly 50-year-old restrictions on travel to Cuba, many Americans, including me, are salivating at the prospect of visiting the forbidden island. Those who've gone on special visas — like my husband and some friends, one a Cuba native — have brought back tempting accounts of salsa music, antiquated cars, lively beisbol, gorgeous beaches and Old Havana's colonial architecture.

Their raves don't extend to the food. Years of agricultural constraints, a poor economy and the American embargo — along with the exodus of much culinary talent — have taken a toll at the table. At least for now, you're likely to find better Cuban food in exile communities, mostly in Florida and northern New Jersey — or in your own kitchen.

The cuisine draws on multiple influences: Caribbean, African, Spanish and American (the narrow island is roughly 90 miles south of Florida). Its chief ingredients are starches such as rice, potatoes, plantains and yucca; citrus, mainly lime and sour orange; both red and black beans; and seafood, poultry, pork and beef. Sauces such as mojo criollo, a marinade of garlic and citrus juice, and sofrito, a saute of garlic, onion, pepper, tomato and herbs, invigorate main dishes. And sugar cane, grown in Cuba since the 16th century, yields rum and sweets such as the swoon-inducing tres leches cake, made with three kinds of milk.

Just as this is comfort food for displaced Cubans, it has become so for us, too. It serves as a touchstone to that earlier, more exotic South Florida life, before marriage, mortgages and kids.

I developed a taste for this hearty, humble cooking while working for a Miami newspaper in the mid-1980s. My beau and I frequented Cuban restaurants and came to love their garlicky shrimp, fried plantains (both the sweet platanos maduros and the savory tostones), croquettes, crispy fried pork chunks (masitas de puerco) and a shredded beef dish called "old clothes" (ropa vieja). We often finished with flan, a delicate custard flavored with vanilla, citrus or coconut.

We lived in an art deco apartment with jalousie windows and an aqua-hued living room. A huge iguana usually lounged on the garden wall, near mango and grapefruit trees that dropped overripe fruit in our small yard.

The same pungent, garlicky aroma that infused favorite restaurants wafted into our tiny kitchen from a neighboring apartment building. There, Anna maintained her cultural ties to Cuba by cooking island basics for her teenage son. Her English was even worse than my crummy Spanish, but she managed to communicate the best way to dispatch a mango: Slice open the fruit on both sides of the flat seed, deeply score the flesh of each side like the outlines of a tick-tack-toe game, then invert each side to easily pare away the flesh.

Carol Guensburg, former food editor for the Milwaukee Journal, is a freelance reporter and editor based in Arlington, Va. She writes about food, education, journalism and more. Contact her at Carol.Guensburg@ comcast.net.

Our tree didn't produce the kind of big, sweet, peachy mangoes that send juice streaming down your arms. Its fruit was small and fibrous — but nothing a blender, a liberal pour of rum, and some lime and sugar couldn't cure. The mango daiquiri — not the ubiquitous mojito — remains my sentimental favorite among Cuban drinks.

My beau-turned-husband and I didn't learn to make Cuban food until we had to, when we moved back north and couldn't find it in local restaurants. Just as this is comfort food for displaced Cubans, it has become so for us, too. It serves as a touchstone to that earlier, more exotic South Florida life, before marriage, mortgages and kids.

It has become part of our family life, too. As a toddler, our younger son developed such an affinity for moros y cristianos — "Moors and Christians," the Spanish-style dish of black beans cooked with white rice — that he'd pound on his highchair tray and demand, "Rice and beans! Rice and beans!" Now he uses the combination to cushion eggs topped with salsa or mojo criollo. And moro rice and Cuban-style pork chops or flank steak are among the boys' top requests when they come home from college.

"Everything about our food is comfort," says Maricel E. Presilla, a Cuban-born scholar of Latin American culture and cuisine. She's also a cookbook author, chef and restaurateur in Hoboken, N.J.

In 1970, when she was a girl, Presilla and her parents left their family home in Santiago, near the island's eastern edge. She has visited repeatedly over the years. "They've lost a lot of the refinements of traditional Cuban cooking," she says of many home cooks, adding that food shortages have forced them to take shortcuts and use substitutes. Younger generations, she says, are losing touch with good, classic cooking. "I meet with people who've just come from Cuba, and their food is really horrendous — canned sauce and spaghetti," she says.

Visitors to Cuba sometimes find good food at paladores, small, family-run private dining rooms licensed by the government, Presilla says. The same is true at a growing number of hotels. Still, she hopes for Cuban culinary re-education, if not outright revolution. The country needs "10 more years of a free government where ideas can flow and food can grow ... to rescue what [it] had," she says.

With plentiful ingredients at hand, however, diners in the United States needn't wait for good Cuban food — travel restrictions or not. 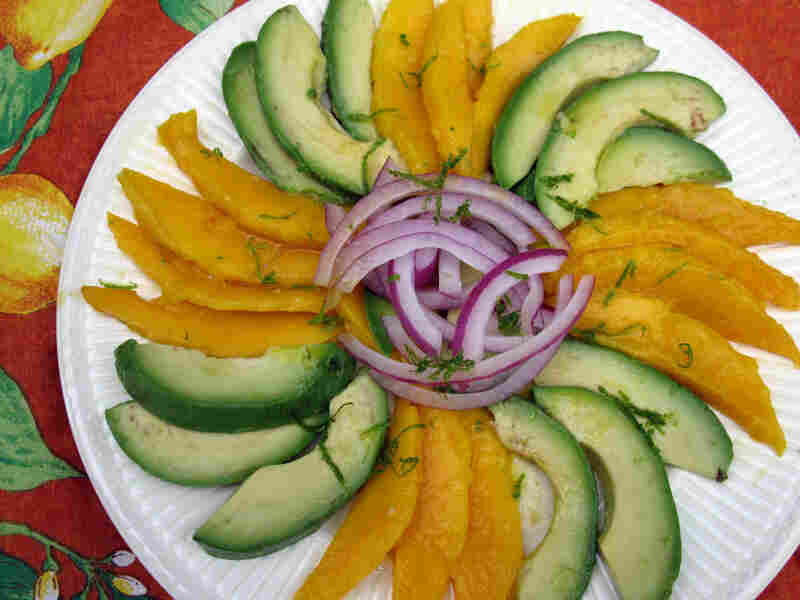 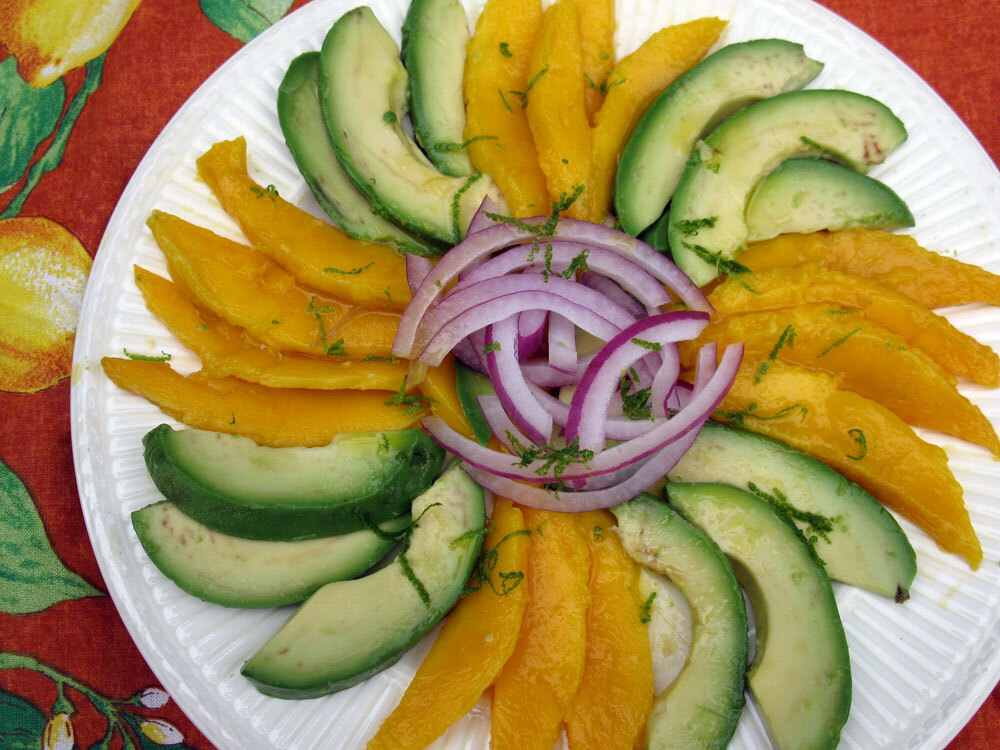 1/2 medium red onion, cut in half lengthwise, and each half thinly sliced

Line a large platter with the watercress, if desired. Arrange slices of avocado, mango and onion. (Dip the avocado in acidulated water — a cup of water with at least 2 tablespoons lime or lemon juice — or the avocado will discolor.)

Drizzle with oil and citrus juice — whisked together, if you like — and season with salt and pepper.

Pork chops marinate in citrus and garlic, then bask over heat in a shallow pool of olive oil and sherry in this classic preparation from Memories of a Cuban Kitchen by Mary Urrutia Randelman and Joan Schwartz (John Wiley & Sons). The original recipe calls for eight thin pork chops and more than 20 minutes' cooking time, but thicker cuts and a shorter cooking time result in juicier chops. Serve with rice, moros y cristianos and/or fufu (recipe below). 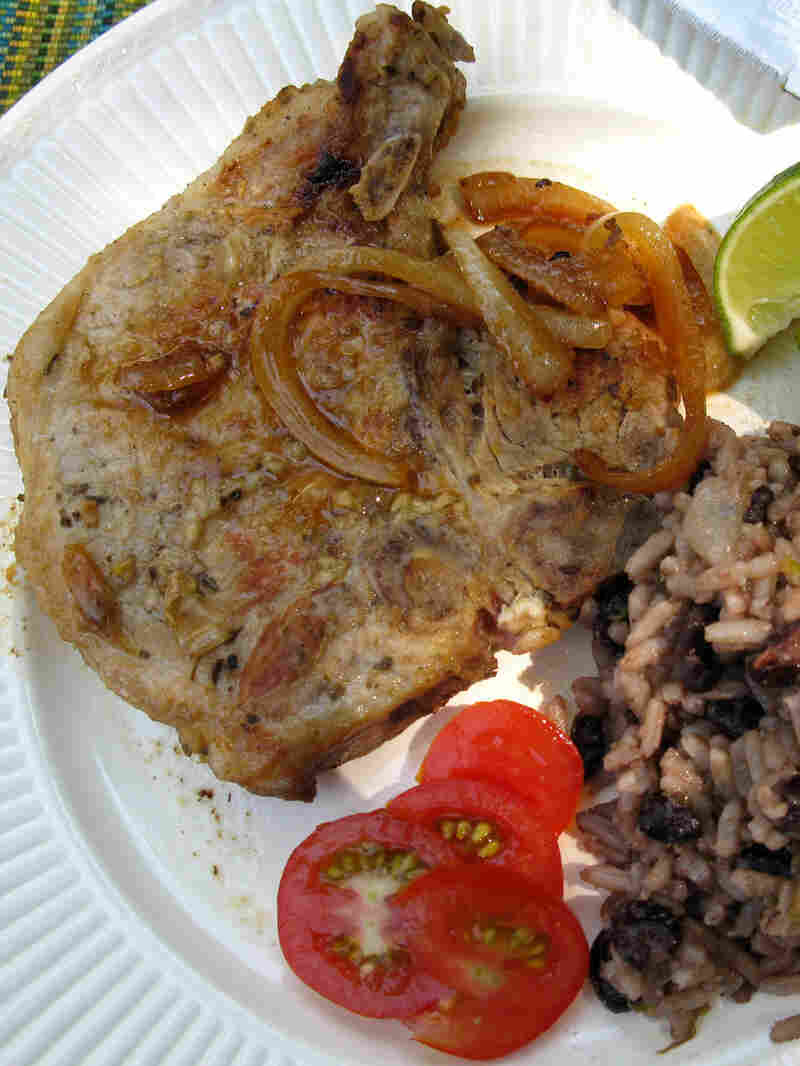 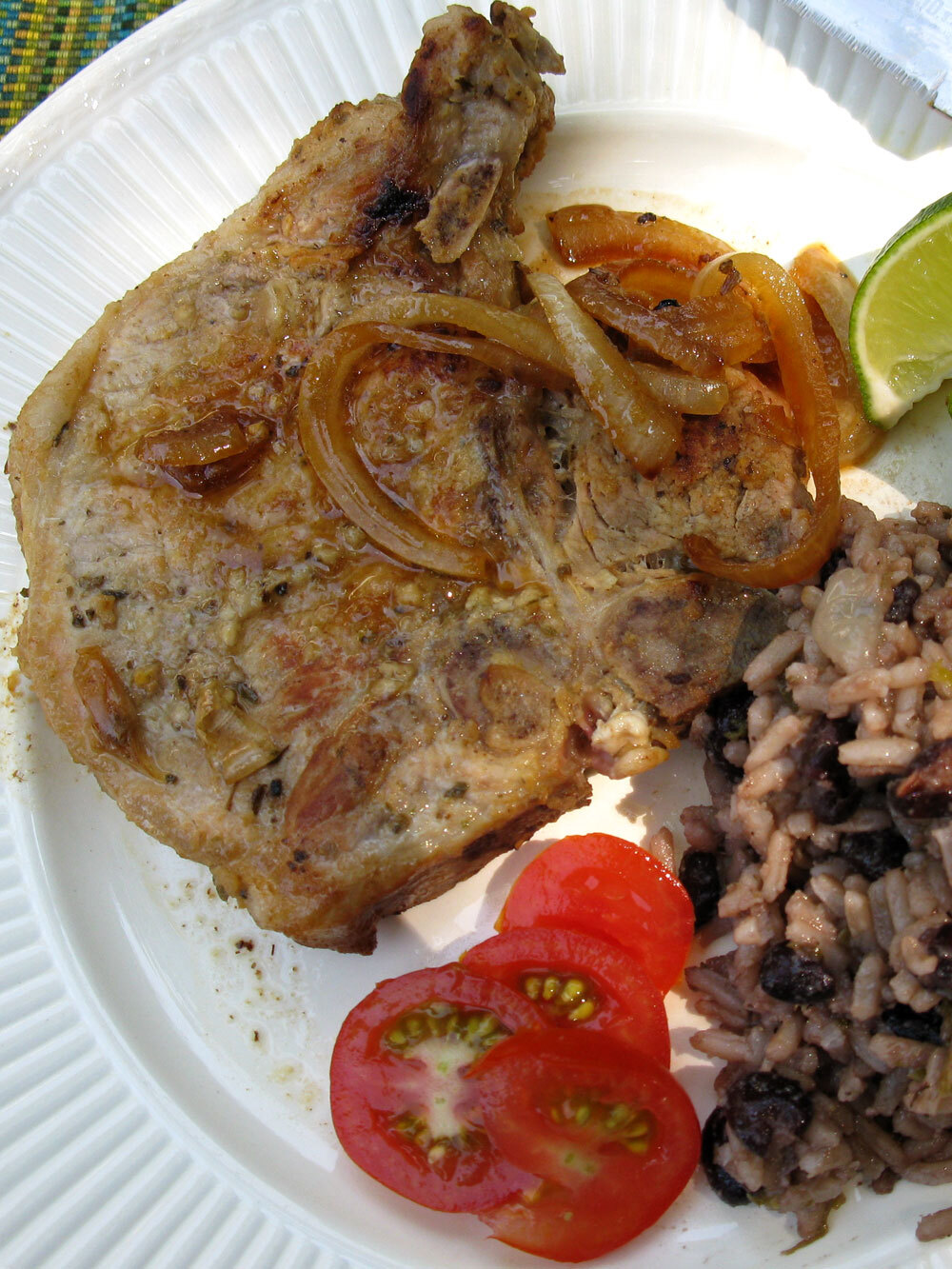 Season the chops with salt and pepper. With a mortar and pestle, crush the garlic, oregano and cumin together into a paste. Rub the chops with the garlic paste, place in a nonreactive bowl, pour the orange juice over, and cover with the sliced onions. Cover and refrigerate 2 to 3 hours.

Remove the chops from the marinade, pat dry with paper towels, and reserve the marinade. In a large skillet, heat the oil over medium heat until fragrant, then brown the chops on both sides. Reduce heat and add the sherry and reserved marinade, including the onions. Cover and cook until the chops are tender, 12 to 15 minutes. The chops should reach an internal temperature of 155 degrees on an instant-read thermometer.

Black beans and white rice cook together in this mainstay of the Cuban table. Dried beans give you more control over texture, but canned black beans work well, too. You can prepare the black bean mixture in advance — excluding the rice — and freeze until needed. This recipe is adapted from Goya, the food manufacturer. 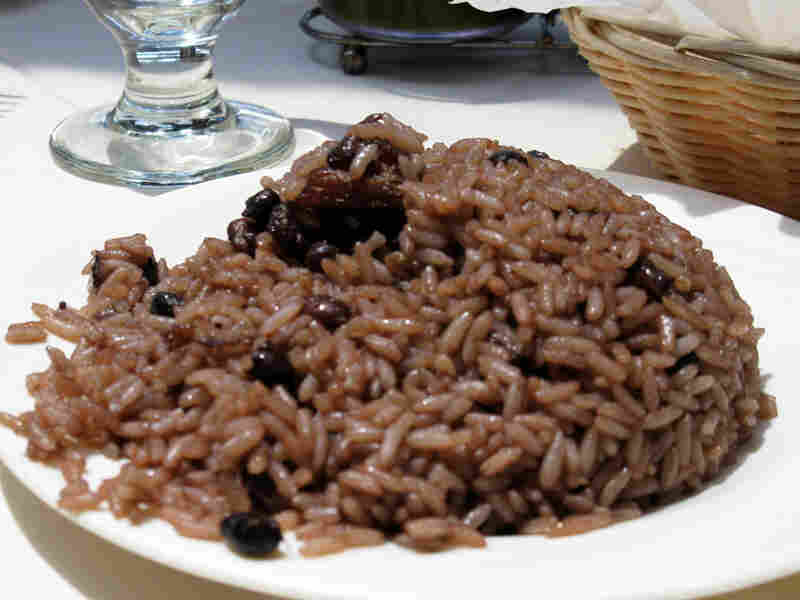 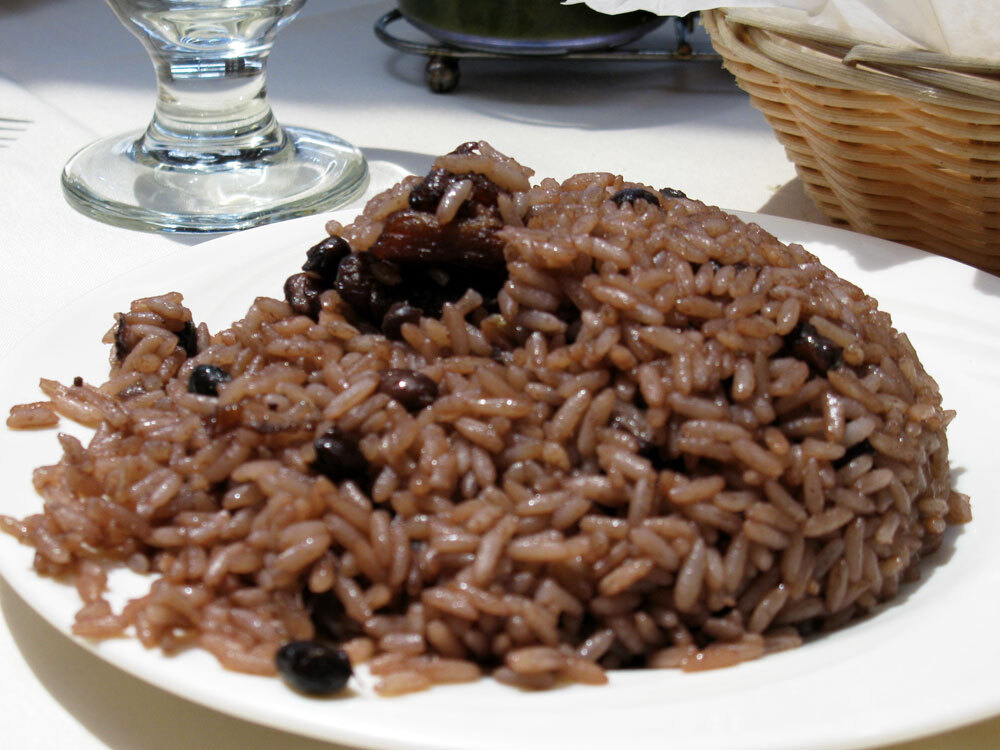 3 to 4 tablespoons olive oil or 1/4 pound slab bacon, trimmed of rind and cut into small pieces

2 cans (15.5 ounces each) black beans, undrained, or 4 cups prepared dried black beans with 1/2 to 3/4 cups water reserved from soaking them

1 to 2 tablespoons wine or cider vinegar

Heat olive oil or saute bacon in a large saucepan over medium heat. Add onion and bell pepper; cook, partially covered, stirring occasionally, about 5 minutes or until they begin to soften. Stir in garlic and continue cooking 2 minutes more. Add broth and 1 cup of the water, then stir in beans, rice, bay leaf oregano and cumin.

Reduce heat to medium low and cook, covered except when stirring occasionally, for about 15 minutes or until all liquid has been absorbed and rice is tender. Add remaining 1/2 cup of water, if needed during cooking.

Before serving, discard bay leaf. Stir in wine or cider vinegar, and salt and pepper, plus butter, if desired. Serve immediately.

Maricel Presilla serves fufu, a traditional Afro-Cuban dish of cooked mashed plantains, yams or the nutty root vegetable malanga, at Zafra, her restaurant in Hoboken, N.J. (Her second restaurant there, Cucharamama, features South American fare.) "In both Cuba and the Cuban exile community, fufu is made with plantains and served as an earthy dry puree enriched with pork cracklings and garlic," she told me. Shaped into balls, following an old Cuban recipe, she presents it in a broth-like tomato sofrito flavored with sesame. Both the fufu balls and sofrito can be cooked a day in advance. Pair this side dish with pan-fried Cuban-style pork chops, steak or grilled chicken. 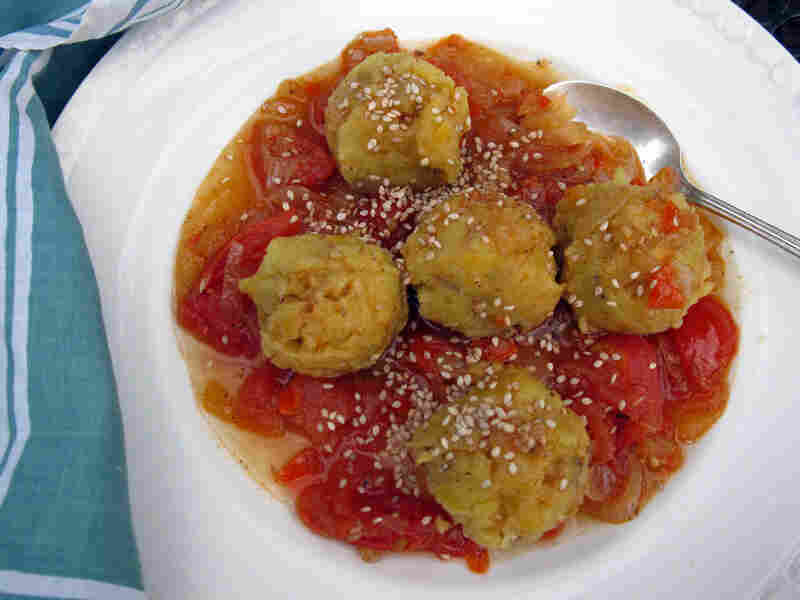 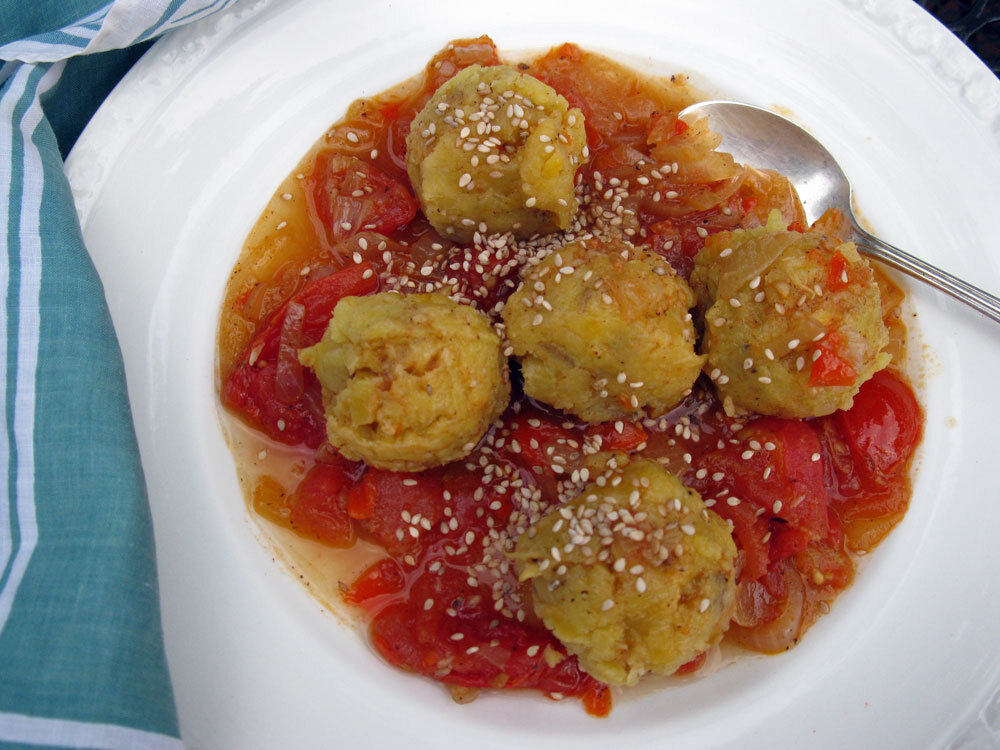 2 pounds plantains, yams, taro or malanga (if using plantains, choose ones that are ripening yet relatively firm, with few brown spots)

2 to 3 garlic cloves, mashed to a paste

4 garlic cloves, mashed to a paste

Peel the plantains, yams or malanga and cut into chunks; rinse under running water. Place in large saucepan and cover with water. (Add a squeeze of fresh lime or lemon juice to avoid discoloration, if you're not cooking immediately.) Add salt to taste. Bring to a boil over high heat and cook until fork tender, about 30 minutes.

Drain and mash into a fine puree with a fork or potato masher in batches, with a mortar and pestle, or using a food processor. Add more salt, if desired. Add the olive oil and garlic paste, and knead with your hands to form a homogeneous puree. Mix in crumbled bacon, if desired.

Shape into balls the size of golf balls, and set aside on a plate in a warm place.

For the sofrito, heat the oil in an 8- to 10-inch skillet over medium heat. Add the onion and pepper; saute until the onion is soft and golden, about 7 minutes. Add the garlic and cook, stirring until light gold, about 1 minute. Add the tomato and salt, and cook, stirring, until soft, about 10 minutes more. Stir in the broth and taste for salt. Simmer 10 to 15 minutes more to blend flavors. The resulting sofrito will incorporate chunks in a thin broth.

Add the reserved fufu balls to the sofrito just long enough to heat through; left in the sauce too long, they'll begin to dissolve.

While the fufu heats, toast the sesame seeds in a dry skillet over medium heat. Toast to a golden brown while stirring, about 1 to 2 minutes. Immediately remove from heat.

Ladle the fufu balls and sofrito onto a serving plate and garnish with toasted sesame seeds. Serve immediately.