Accessibility links
Battle Against IEDs Spreads From Iraq To Afghanistan Homemade bombs are the biggest killer of American troops in Iraq and Afghanistan. In Iraq, one idea that has worked to protect troops from the bombs is called Task Force ODIN. Now, that strategy, which relies on aerial surveillance video, is heading to Afghanistan.

Second in a series

For years in Iraq, what would normally be a boring task for U.S. troops was terrifying: driving. The endless hours of it that an occupying army has to do could get you killed. 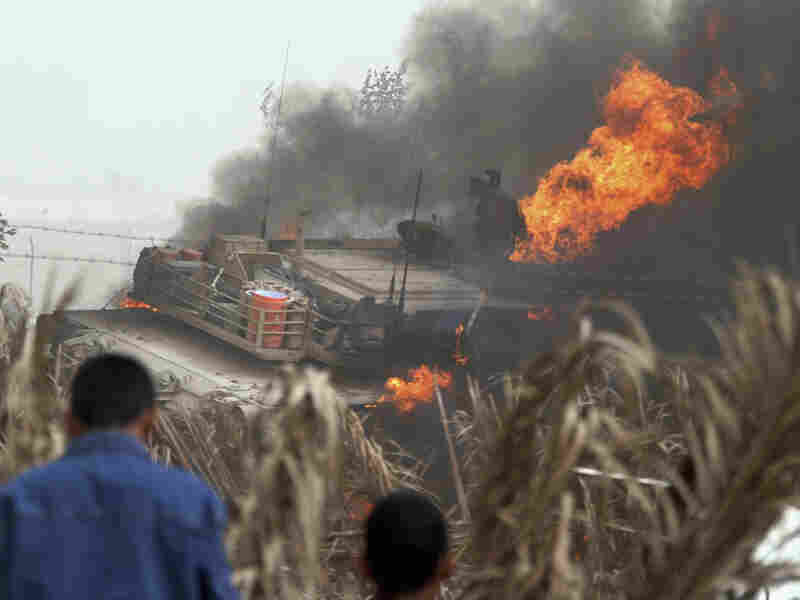 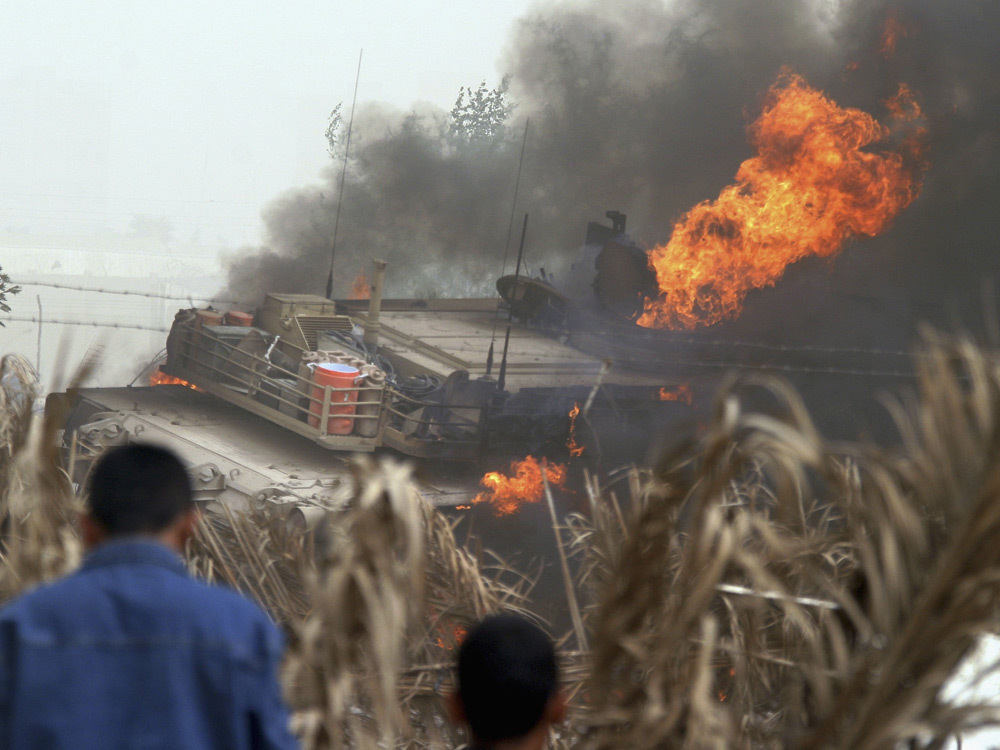 Iraqis look at a burning U.S. Army Abrams battle tank on March 10, 2006, after an IED exploded on a highway in eastern Baghdad.

One moment things would be fine; you would be gazing out the window at the dust brown monotony that passes for a landscape in Iraq. The next, there would be a loud explosion and debris raining down from a bomb that could have looked like anything. It could have been hidden in a trash can or inside the body of a dead dog or buried under the road itself — or even built into the curb.

For a while, it seemed IEDs were everywhere.

In the early years of the war, those improvised explosive devices became the biggest killer of American troops — and the same now holds true in Afghanistan. The U.S. military has tried one thing after another to try to protect its troops from homemade bombs.

In Iraq, one idea that worked was called Task Force ODIN — ODIN standing for Observe, Detect, Identify and Neutralize — and it's now heading to Afghanistan as well.

The Rise Of IEDs In Iraq

In 2005, as IED explosions in Iraq claimed more and more lives, NPR talked with Lt. Col. David Batchelor. He'd had more than his fair share of experience with IEDs.

"I've been hit 38 times in 11 months," he said. "No matter how poised you think you are, the first five seconds afterwards is pretty exciting because the sound is enormous; it gets your attention."

By 2006, the problem was even worse. At one point, 100 IEDs went off every day in Iraq — thousands each month. Hundreds of soldiers were being killed.

The Defense Department set up a special group, the Joint IED Defeat Organization, to tackle the problem. Lt. Gen. Thomas Metz, who is now in charge of that group, says he quickly came to an important realization.

"We're not going to defeat the IED," he says, "because it is simply a lethal ambush and mankind has been ambushing mankind for thousands of years."

But to try to at least manage the IED problem, the military developed special jammers with names like Warlock and Javelin. It built special vehicles to clear the roads, and others to withstand the seemingly inevitable explosions.

One of the most secretive — and lethal — programs was Task Force ODIN.

Here's how it works: When U.S. troops are being hit with IEDs along a stretch of road, ODIN sets up an intensive watch. It uses off-the-shelf, wide-angle video cameras and special radar loaded onto modified civilian planes, C-12 Beechcraft. The planes fly over the road for hours or days — just looking for something out of the ordinary.

Col. A.T. Ball set up the first Task Force ODIN in Iraq. He says the new aspect of the program was the ability to watch all the time — it allowed him to learn what normal looked like and what it didn't.

"Digging or laying wire or whatnot in an area where there is not irrigation canals — no new infrastructure being placed in," he says. "These sort of anomalies lead you to believe that there could be enemy activity there."

When the manned planes spot something suspicious, then the military sends in an unmanned drone, like a Predator, to check it out more closely. And then, another manned system is cued — this time, attack helicopters.

"At 3 o'clock in the morning in a remote area a hundred miles away," Ball says, "[it] necessitated me being able to dynamically address, let's just say, an insurgent force that's digging in bunkers, IEDs and an ambush site."

And the military says Task Force ODIN has killed thousands of people planting IEDs in Iraq over the past few years.

Staying Left Of A Boom

Lt. Col. Jim Cutting, who commanded Task Force ODIN in Iraq in 2007 and 2008, says actually planting the bomb is the last link in the chain of events that leads to an explosion.

"So in the steps of planning, financing, gathering materials, emplacing and triggering an IED, you want to interdict one of those steps," he says. "And if I can take out one, then it won't happen — the boom won't happen. And the idea is to stay left of a boom."

In other words, to stop a bomb before it goes off.

"Sometimes you're to the right of one boom, but you use what you've learned from that to get to the left of the next one," Cutting says.

Cutting doesn't want to get into the specifics of how exactly the military does that. But conceptually, here's how military and other sources say it works:

When a bomb goes off in an area Task Force ODIN has been watching, it means the military has video of the explosion and the area around it.

The military can essentially hit rewind — and trace the bomber's route to the site.

Cutting says they can also do the same thing in real time. They've spotted someone — "just say, an IED emplacer," the colonel says. The military will watch him and follow him, using an unmanned drone like a Predator.

"Maybe follow him back to his cache site where he has his explosive devices," Cutting says. "Where does he live? Who are his friends? And then watch him for days or weeks on end, if you really want to, if it's that important."

The goal isn't to get just the one bomber. It is to learn who he works for.

In Iraq, the most deadly IEDs aren't the sort of devices that can be cooked up in a garage. They require some skill to make. That's what makes the network so important: There are actually a limited number of people who can manufacture the bombs.

"It's much more damaging for me to take a managerial-level guy out of their network than just some guy who's given a small of stack of bills to go dig a hole," Cutting says.

Now, ODIN is moving to Afghanistan. Gen. Stanley McChrystal, the top U.S. commander there, headed up special operations before he got his current job. He visited ODIN a few times in Iraq, and his group was the single biggest customer for ODIN's capabilities.