Accessibility links
The Original Or The Remake? 'You Heard It Here First' Dobie Gray, in his hit "The In Crowd," famously said, "The original is still the greatest." But is it? Ace Records in London has put out a CD called You Heard It Here First!, with 26 original versions of hit songs. Rock historian Ed Ward takes a look. 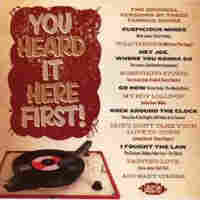 Dobie Gray, in his hit "The In Crowd," famously said, "The original is still the greatest." But is this always true? Ace Records in London has put out a CD called You Heard It Here First, with 26 original versions of hit songs.

When Bill Haley's manager handed him Sunny Dae and the Knights' record of "Rock Around the Clock," he and his band the Comets just knew they could do a better job. They weren't sure exactly how, but by listening to the arrangements rhythm and blues bands used, they eventually came up with something that worked. It all seems pretty obvious to us now, but in 1954, they were just figuring rock and roll out.

But as time went on, rock-and-roll acts stopped having to reinvent songs and concentrated on just improving them. As it turned out, there was a lot to improve on.

There was nothing wrong, per se, with the Kingston Trio's recording of Dino Valente's "Let's Get Together," and the hustling young San Francisco songwriter was probably very happy to have sold something when the band recorded it in 1964. But the tune had a life of its own, and by the time the hippie era started a couple of years later, it was in the repertoire of loads of local bands, including the Jefferson Airplane and the Youngbloods, both of whom understood the harmonies — and the message — even better.

In 1965, Arthur, the New York discotheque owned by Richard Burton's wife Sibyl, was all the rage in some circles, and its house band, the Wild Ones, figured they could raise their profile and the club's if they could make a record. Their manager approached Chip Taylor, a prolific Tin Pan Alley songwriter, for a song. He knocked it out in an hour.

Needless to say, even a band which considered themselves troglodytes — the Troggs — could improve on that, but it was up to Jimi Hendrix to reach way down inside the song and turn it into a masterpiece.

In England, plenty of bands began by recording American blues tunes, but some, including the Beatles, also looked to early soul music for inspiration. One of those bands was the pre-psychedelic version of the Moody Blues, whose first hit was the result of one of their managers being a record collector who'd just come back from the States with a record he couldn't stop playing. Good thing, too, or Bessie Banks would have slid into total obscurity.

Nor did the practice of finding obscure soul records stop in the 1960s. One of the longest-charting records the American charts have ever seen was a remake of a total flop from 1965 — "Tainted Love" with Glen Campbell on guitar — that became a club hit in England in the 1970s.

Hmmm, sometimes the original is the greatest.

Ed Ward's blog is City On A Hill.