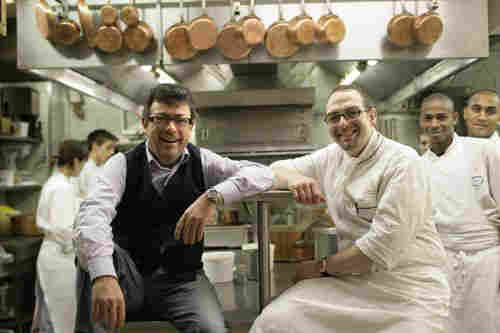 Think of "fine French cuisine" and you imagine pressed linen tablecloths, a lineup of wine glasses, tuxedoed waiters ferrying trays of oysters or silver-domed serving dishes. It's an experience that has persisted for generations: formal, classical and expensive.

But the definition of the quintessential French dining experience is evolving, thanks in part to one Paris chef. For eight years, Chef Christian Constant ran the kitchen at Crillon, one of the city's top hotels, where he earned two coveted Michelin rating-system stars. But at the height of his success he left the hotel restaurant to branch out on his own.

"He had the impression that he was falling asleep in the kitchen," Constant's wife, Catherine, says. "He was getting a bit stagnating."

Constant now has four restaurants, each one small and relatively inexpensive, but still focused on quality food. (Take a look at one of the menus.) He's leading a mini-revolution that's reverberating in a small-but-devoted segment of France's culinary community.

For author Michael Steinberger, the revolution has arrived just in time. Steinberger has a new book called Au Revoir To All That: Food, Wine, and the End of France, in which he laments the decline of the French culinary tradition.

It's not that you can't still get great food, but something essential has changed, Steinberger says. Working families have less time for cooking at home, so French children aren't raised on great food. Bread, wine and cheese makers have all faced problems, and high taxes and bureaucracy make running a restaurant so difficult that many of Paris's top young chefs have defected to London or New York. 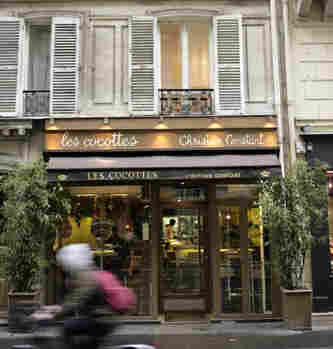 Diners can find "soothing, simple dishes" at Les Cocottes. Constant says he launched the restaurant to "give people what they want to eat." Clay McLachlan/Le Violon d'Ingres hide caption

For Steinberger, France's culinary slide is a loss that neither the stuffy, rigidly designed, Michelin-starred restaurants nor the hugely popular McDonald's chain — a location is planned for the food court at the Louvre — can make up for.

But he says that a generation of young French chefs, trained by Constant, has started cooking classical French food and serving it in simpler surroundings, for reasonable prices. 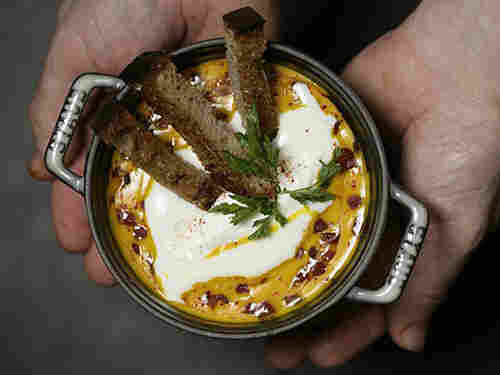 "Bistronomie is this idea that's taken root here in Paris," Steinberger says. "Talented chefs have decided, 'You know what, we don't want to have anything to do with this Michelin system. We don't care about winning three stars. We don't want to have these luxury palaces where you've got five or six people in penguin suits hovering over you. We don't want to do that and our clientele doesn't want it anymore. What they want is good food at prices they can afford.'"

Judging from the lines outside his restaurants, Christian Constant seems to be giving the people what they want — no more complicated place settings, hovering wine stewards and uptight staff. Constant's staff — which he likens to a rugby team — manages to produce small wonders from tiny kitchens, in a comfortable, welcoming atmosphere that seems to please everyone involved.

"We have this restaurant where everybody enjoys working," Constant says, his wife Catherine acting as translator. "We love the relationship that we have with our clients now. It's much more relaxed, but still professional." 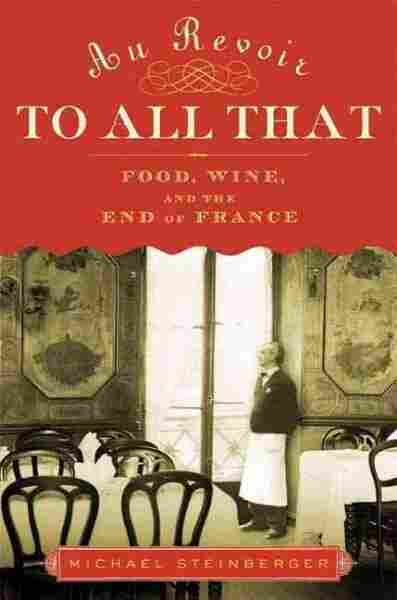 Au Revoir to All That

Food, Wine, and the End of France

Title
Au Revoir to All That
Subtitle
Food, Wine, and the End of France
Author
Michael Steinberger