Accessibility links
House Hears Testimony On Football, Head Injuries The suspected link between football head injuries and brain problems has been the subject of great debate, and it played out again at a hearing Wednesday before the House Judiciary Committee. NFL Commissioner Roger Goodell defended the league and said that the care of retired players was a priority. 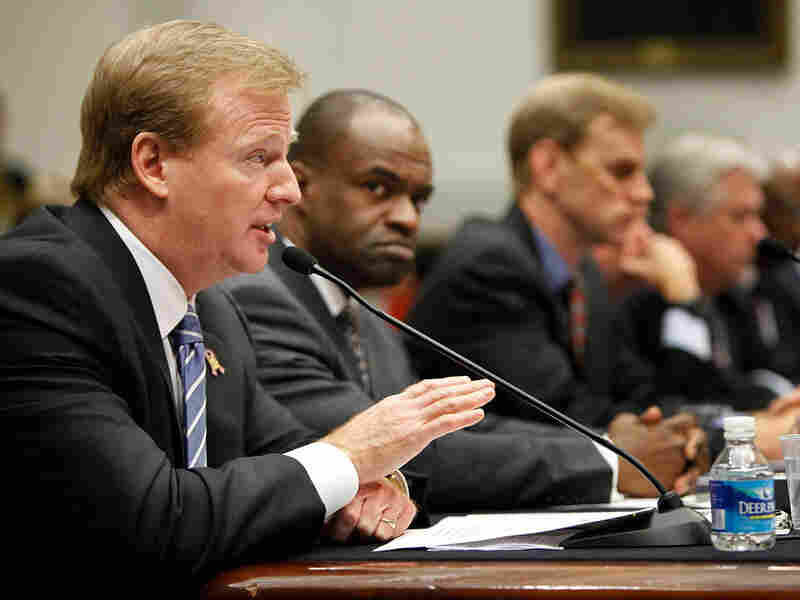 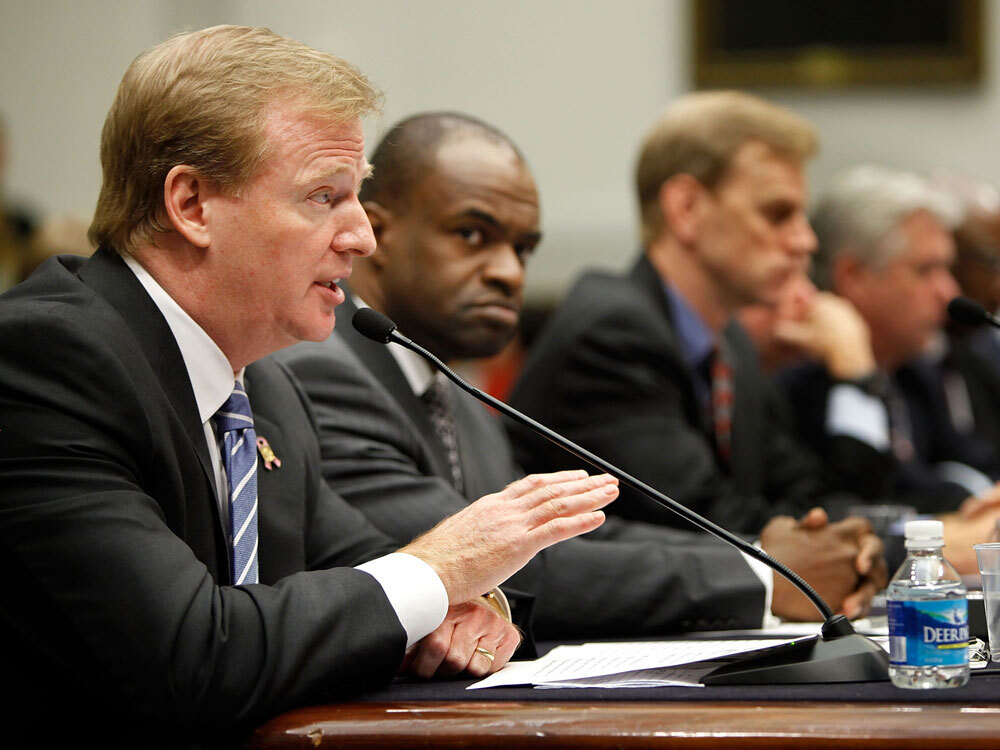 NFL Commissioner Roger Goodell testifies with others before the House Judiciary Committee about brain injuries resulting from football.

That's how House Judiciary Committee Chairman John Conyers described the matter of football-related head injuries and their long-term effect on the brain.

Conyers' panel heard from medical experts, former professional football players and National Football League executives Wednesday. And while consensus on some topics was elusive, there was a general feeling that a sport known for its violent collisions somehow has to be made safer.

The hearing was prompted by the most recent study pointing to a possible connection between football and long-term brain problems. University of Michigan researchers surveyed more than 1,000 former NFL players and found that the players may have a higher than normal rate of memory-related illnesses, including Alzheimer's disease and dementia. The lead author repeated Wednesday that the results should not be viewed as definitive.

The suspected link between football head injuries and brain problems has been the subject of great debate, and it played out again at the hearing. NFL Commissioner Roger Goodell, under direct questioning, wouldn't acknowledge a link. None of the members of the NFL's medical committee on concussions, which has famously discounted independent studies showing a link, was there to testify.

But Dr. Robert Cantu, a clinical professor of neurosurgery at Boston University School of Medicine, was there. When asked about "the link," Cantu, who has spent the past 30 years studying sports-related concussions, said, "Yes, I think there's cause and effect. It's not unique to the NFL, though."

There was a particularly contentious moment when Democratic Rep. Maxine Waters of California interrupted Goodell's testimony.

"I think it's time for the Congress of the United States to take a look at your antitrust exemption," she told him, adding, "I think that you're an $8 billion-a-year organization who have not taken seriously your responsibility to the players. The only question is, what are you going to do? Are you going to pay for it? Pay the injured players and their families for the injuries that they have received in helping you to be a multibillion-dollar operation?"

Goodell said earlier in the hearing that the league has made improvements in pension, disability and medical benefits for retirees.

Still, many NFL alumni with head injuries, including brain illness, are angry about what they say has been shoddy treatment by the league with regard to medical care and attempts to secure disability benefits.

New NFL Player's Association head DeMaurice Smith admitted that the union "hasn't done its best," adding, "we'll do better. I commit this as our primary mission. We will not fail them [former and current players]."

The hearing revealed many aspects to the problem. While the NFL was center stage, there was plenty of talk about the need to address head injury issues at lower levels of football. Better head injury education with youth, high school coaches and parents. Concussion knowledge has advanced greatly in recent years, but there's still a lot people don't know.

With all the attention focused on head trauma and brain illness, it will be harder to plead ignorance in the future. There still are studies to complete, older NFL players to compensate and young players to protect. Questions remain about how you effect change in a game that traditionally embraces and rewards aggression and violence, a game that, at the highest — and most violent — level, remains America's No. 1 spectator sport.

We reported that no members of the NFL medical committee on concussions attended a House committee hearing on football-related injuries. That was incorrect. Andrew Tucker, the team doctor for the Baltimore Ravens, testified. Tucker is also a member of the NFL's Mild Traumatic Brain Injury committee. Several members of that committee have generated controversy with public statements discounting research that indicates a link between football head injuries and later brain illness. None of those other committee members testified before the hearing.