Accessibility links
Afghan Violence Won't Deter U.S. Civilian Efforts The deadly attack on a U.N. guesthouse in Kabul on Wednesday underscored the dangers of being a U.S. civilian in Afghanistan. The State Department is currently in the process of beefing up its corps of U.S. civilian advisers in Afghanistan, despite the security concerns. 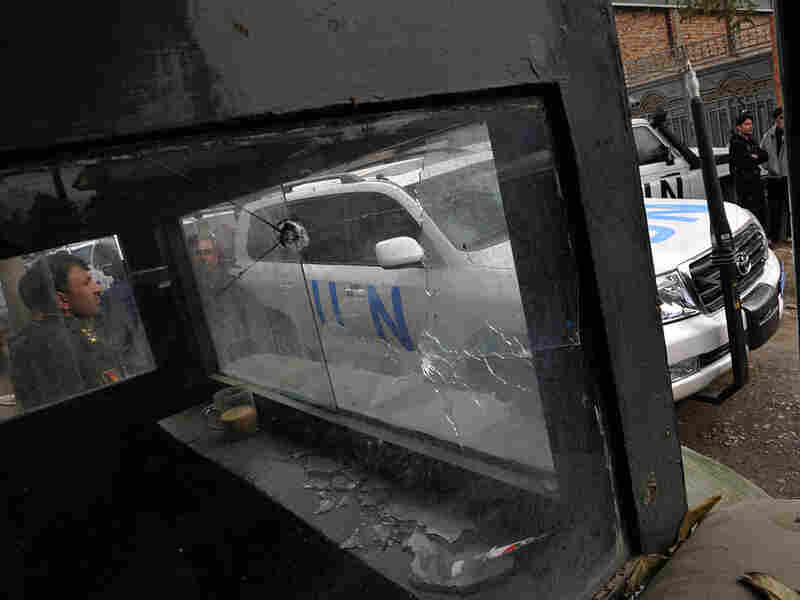 A U.N. vehicle is seen through the bullet-riddled guardhouse of the Bekhtar Guesthouse in Kabul, Afghanistan, after an attack Wednesday by Taliban suicide gunmen killed six expatriate U.N. staffers. The attack is a recent reminder of the dangers facing civilian workers in Afghanistan. Romeo Gacad/AFP/Getty Images hide caption 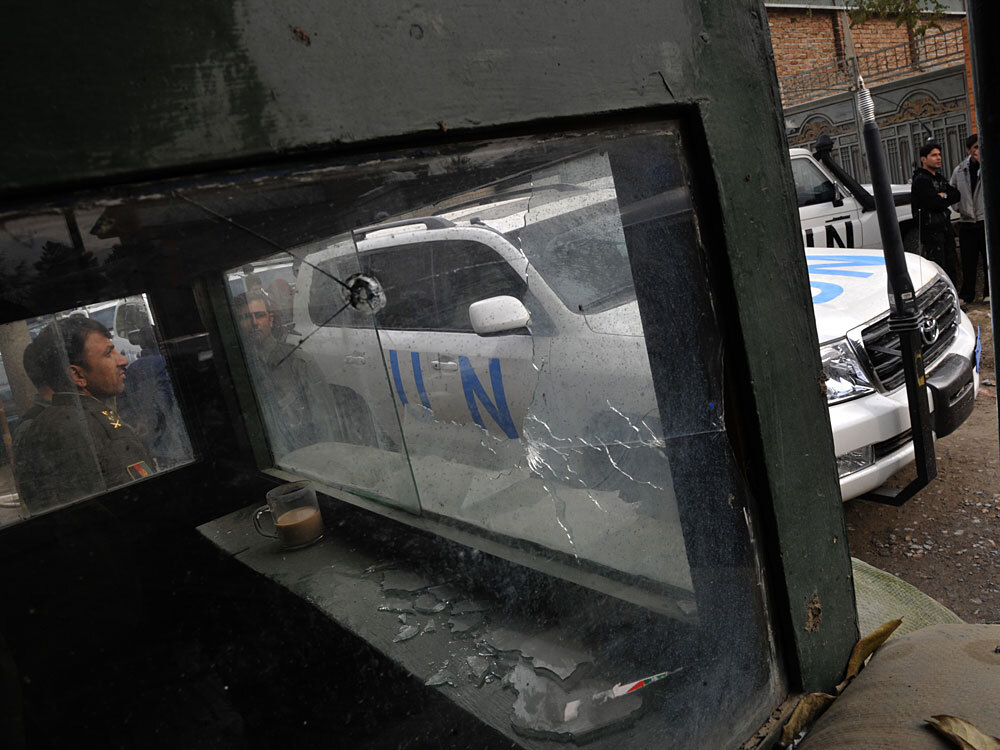 A U.N. vehicle is seen through the bullet-riddled guardhouse of the Bekhtar Guesthouse in Kabul, Afghanistan, after an attack Wednesday by Taliban suicide gunmen killed six expatriate U.N. staffers. The attack is a recent reminder of the dangers facing civilian workers in Afghanistan.

The deadly attack on a U.N. guesthouse in Kabul on Wednesday — and a helicopter crash that killed three U.S. drug enforcement agency officials earlier in the week — underscored the dangers of being a U.S. civilian in Afghanistan.

The State Department is currently in the process of beefing up its corps of U.S. civilian advisers in Afghanistan, despite the security concerns and a high-profile resignation from the mission.

He said the U.N. contingent will remain in Afghanistan to help pave the way for the Nov. 7 runoff election between President Hamid Karzai and his challenger, former foreign minister Abdullah Abdullah. "We should not be deterred by these heinous terrorist attacks," Ban said.

In Washington, there was a similarly defiant tone. "If that is their purpose here, to try and discourage us or intimidate us, it's not going to work. We are committed to the Afghan people, and we are committed to seeing this through," State Department spokesman Ian Kelly told reporters Wednesday.

But the violence comes at a time when some are questioning the U.S. mission in Afghanistan and whether civilian experts can do much to help.

Matthew Hoh, a former Marine Corps officer who was serving as the senior U.S. civilian in Afghanistan's Zabul province, resigned last month in protest of the war. In his resignation letter, Hoh said he had "lost understanding of and confidence in the strategic purposes" of the U.S. presence there. His resignation was first reported earlier this week in The Washington Post.

Anti-war activists have seized on Hoh's resignation to make their case.

The Hoh letter suggests that the U.S. is essentially intervening in an ongoing civil war in Afghanistan, Naiman said.

Instead, it has made civilians targets of the insurgents, he said. Naiman's advice is to focus on the political process — and to encourage neighboring countries to help support Afghan reconciliation as well.

"I'm all for sending more civilians in a political context where we are trying to end the war and promote national reconciliation," he said.

For now, State Department planners are pushing ahead with efforts to get 974 civilian positions filled in Afghanistan by the end of the year — including lawyers, agriculture and development experts and diplomats.

Deputy Secretary of State Jacob Lew told reporters earlier this week that the U.S. has already nearly doubled the number of civilians in Afghanistan this year — from 340 to more than 600 — without the uproar that marred the Bush administration's efforts to get more civilians to sign up for duty in Iraq.

"I don't want to say it's easy. This is very hard. I mean, they're hard assignments. These are hard decisions for people to make to go over, and it's hard work when they get there," Lew said. "So it's challenging, and I think we have to be kind of conscious of the fact that it gets harder as you do it year after year, because people who are inclined to take assignments like this have already done it once or twice."

Even if President Obama decides to send more troops to Afghanistan, Lew says he doesn't think the needs on the civilian side will change radically, though the State Department might have to rethink where exactly the civilians are sent.

As in Iraq, the United States has mixed civilian-military reconstruction teams deployed around the country in Afghanistan.

Susan Johnson, the president of the American Foreign Service Association, says it is still too early to tell whether the latest violence in Afghanistan will hurt the State Department's recruiting efforts for those assignments.

She says it is time for a broader debate about what civilians can or cannot accomplish. The resignation letter of Hoh has some apt points, Johnson said.

"We certainly respect what Mr. Hoh has done in putting this out," Johnson said, "if it stimulates more thoughtful and constructive discussion of our policy and approach and the question of how many civilians we should or shouldn't be sending. We shouldn't be just stuck in the groove that we are in or in some old construct that we are transferring from Iraq."