Accessibility links
How Do You Find A Job? Ask The Algorithm The state of New York is looking for ways to reduce the time the unemployed spend looking for jobs, and it's turning to a mathematical formula for help. Using an algorithm developed by a Boston technology company, the program directs resumes to the employers most likely to make a hire. 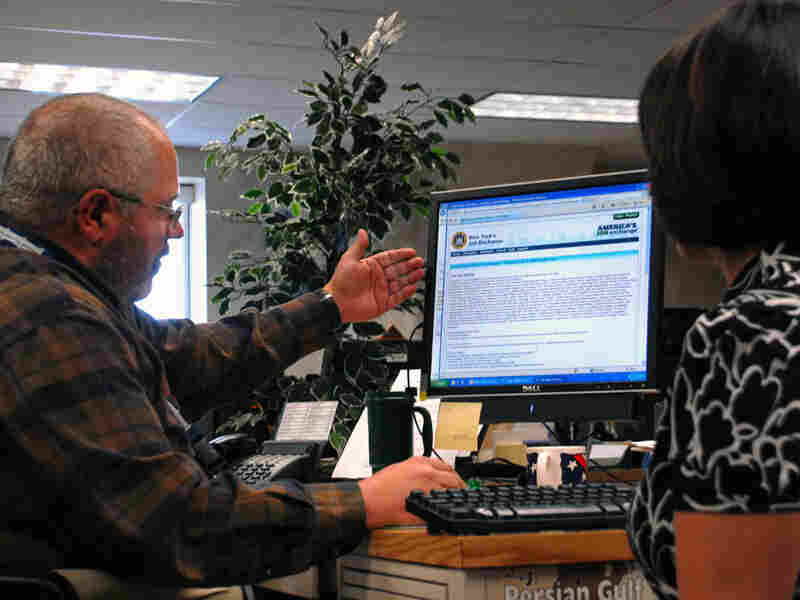 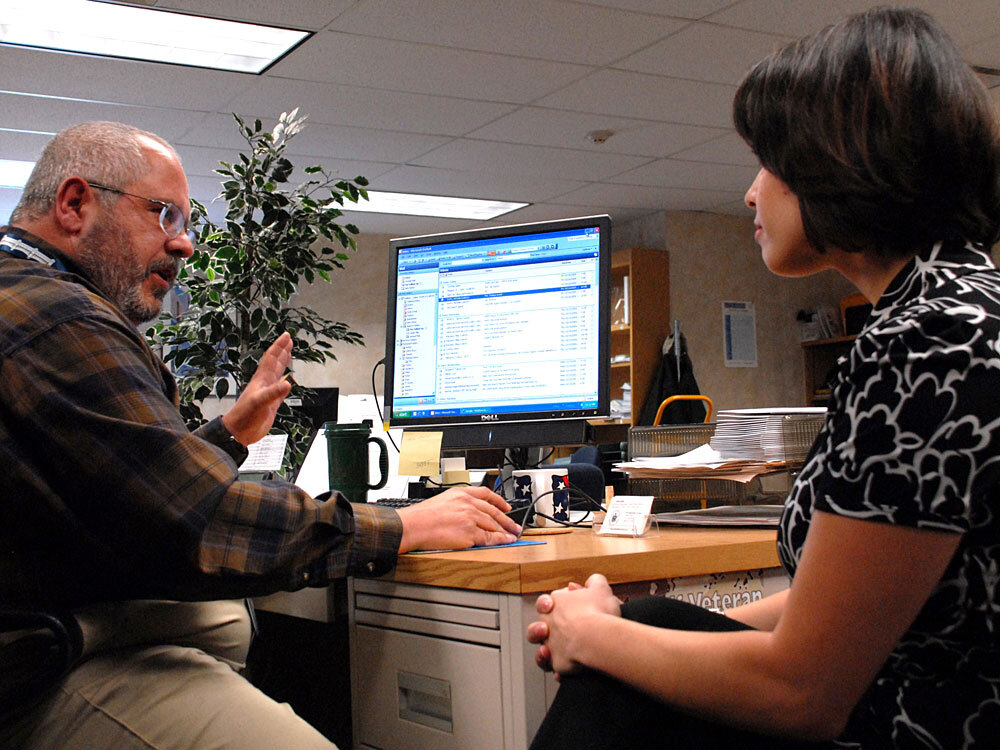 Employment counselor Frank Julian shows a job seeker, Karim Cruz-Neal, how to use the department's latest tool — an algorithm — to find employment leads.

The state of New York is looking for ways to reduce the time the unemployed spend looking for jobs, and it's turning to a mathematical formula for help.

The state's Department of Labor is touting the new tool as a major leap forward in the search for jobs. The formula is designed to direct resumes to the employers most likely to make a hire.

So far, Minnesota is the only other state to use this kind of fancy math to try to connect workers with jobs. There are no hard data, but a spokesperson for the state says the program has been working well.

A New York State Of Mind

Lisa Berger is one of the very first New Yorkers to test what this computer program can do. She has a couple of decades of experience as a publishing executive and, more recently, as a nonprofit fundraiser.

Berger is self-assured, but she says being jobless for nearly a year has rattled her. So, she says, she's willing to try something new: "If there's something out there that can help, I think the environment out there is really bad. I have never in my entire life had trouble getting a job like this — ever."

So Berger went to a job center in Manhattan. After meeting with employment counselor Emily Aponte, she sends off her resume. Five minutes later, Aponte announces that a reply has come in by e-mail: 15 job matches were generated by Berger's resume.

Assistance From An Algorithm

The listings for Berger were selected from the state job bank by a computer running a complex mathematical formula, or algorithm. These kinds of equations are also the key element behind Google's Internet search results, and the movie recommendations made by Netflix.

Matt Sigelman, the chief executive officer of Burning Glass, a Boston company that developed the job search formula that Berger tested, says the beauty of algorithms is that they see patterns.

"It's actually studying how real people — by the tens of millions — get the jobs that they move into," Sigelman says. "The technology is designed to learn from past patterns of placement."

For the user, it's different from a keyword job search on Monster.com or CareerBuilder.com, because the algorithm actually registers whole sentences from resumes. Sigelman says this program mimics the human activity of reading and digesting information. Coca-Cola, Accenture, and Google are some of Burning Glass' clients — a list that now includes the state of New York.

But in the case of New York, the program is being used on behalf of job seekers — people like Berger.

She isn't overly impressed with the jobs the algorithm recommends. Only one opportunity really interests her — the director of strategic planning at a sports public relations company. The description says this position is "nontraditional."

"And it might be a little bit more interesting," Aponte responds.

Berger also likes the sound of the position because it reports to the managing partner. "It does what I like doing best in the corporate world, which is coming up with a strategic plan," she says.

Berger says she'll probably apply. And she did learn something: If she wants to work at a nonprofit organization, she needs to beef up that part of her resume.

"It's highlighting much more of what I used to do versus what I want to do," Berger says. "And that's the biggest thing I think I've learned."

New York is trying job-seeker algorithms as a one-year pilot program. If enough people say they got something out of it, the state labor department says it will make the program permanent.