Accessibility links
Crime Locale Is Key In California's 3 Strikes Law Under California's three strikes sentencing law, criminals' fate may depend as much on where they're arrested as on what they're arrested for. Los Angeles County District Attorney Steve Cooley, who supports the law, almost never charges a nonviolent offense as a third strike. But 100 miles north in Kern County, District Attorney Ed Jagels almost always does. 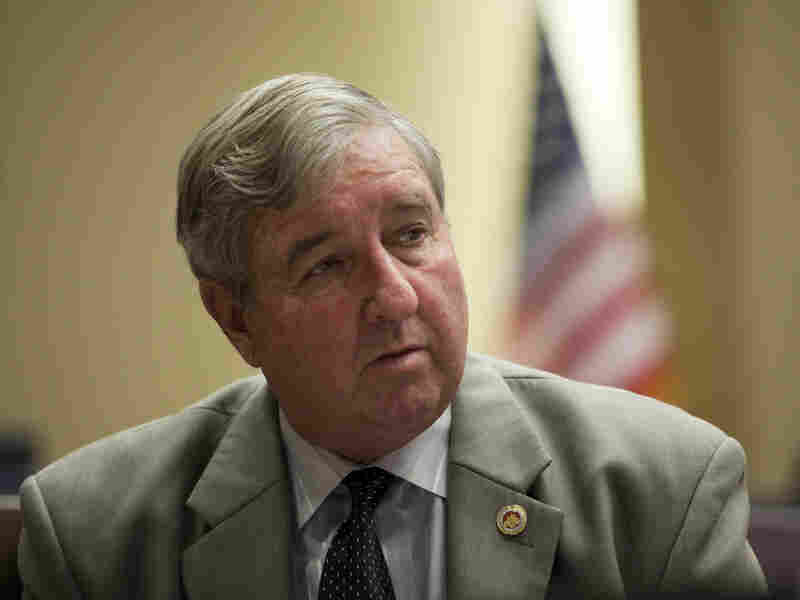 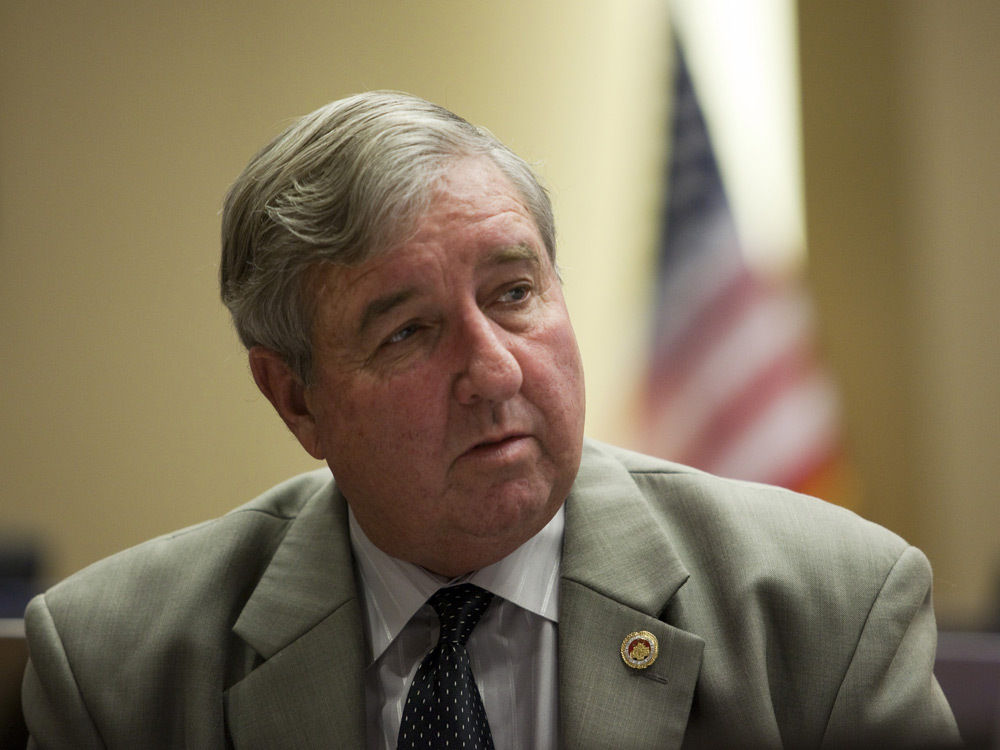 Los Angeles County District Attorney Steve Cooley, pictured here on Oct. 1, almost never charges a nonviolent offense as a third strike. He says 25 years to life in prison is the same sentence he gives murderers, and it's "disporportionate."

California's three strikes sentencing law can send a repeat offender to prison for 25 years to life. But the third strike doesn't have to be a serious violent crime.

Kern County, in California's central valley, is known for agriculture, oil wells and country music. In legal circles, it's also known as the county with the highest rate of prosecuting and sentencing people under the three strikes law.

Jagels complains that the national media lie when they report on California's three strikes law. They single out cases where the third strike was a nonviolent crime, but they never look at the whole record, he says.

I don't know one of these individuals that have been sentenced as a third striker who didn't deserve the sentence.

"It could be an auto theft," he says. "But if the individual has previously been convicted of, let's say, a rape, an assault with a deadly weapon with great bodily injury, it seems to me, if he hasn't learned his lesson and we catch him for an auto theft, he needs that severe penalty of 25 to life."

Local media have fixated on what's come to be known as "the doughnut case." Robert Fassbender was arrested for stealing a pack of doughnuts worth about a dollar. He is not a model citizen. He's been in and out of jail, mainly for petty crimes. But back in the 1970s, Fassbender had two convictions — or two strikes — for robbery, so he found himself facing 25 years to life for the doughnuts.

Criminals who have second and third strikes under California's three strikes law vary from county to county. Table 2 in the report below shows the county where the crime was committed.

Shortly before trial, the charges were dropped, but not because Jagels had any second thoughts about the case.

"It was dropped because, based on changed witness testimony, it wasn't certain that he was guilty," Jagels says. "Had he been guilty, it would have been a perfectly appropriate sentence. The guy had a horrendous criminal record. He was a perfect candidate for the three strikes statute."

Down the street from Jagels' office, about two dozen members of a group called FACTS, or Families to Amend California's Three Strikes, held a demonstration in front of the Bakersfield courthouse.

Katherine Keathing was holding a pink poster with photos of her sister Bernice Cubie, who is currently serving 25 years to life. Keathing insists that her sister is not a dangerous criminal, just a hopeless drug addict. 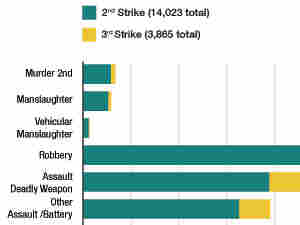 "In the process of supporting her habit, she was, you know, stealing and doing things like that and getting in prostituting," Keathing says. "And the next thing you know, when they stopped her with the drugs, she wanted to resist arrest. As far as violent — carrying a gun or knife or weapon — I've never known her to do that."

Cubie is one of those cases that still haunts Mark Arnold. He was the public defender in Kern County for 14 years until he retired last month.

"Bernice Cubie was convicted in 1998 for possession of $10 worth of drugs. She is now 59 years old, she's a grandmother several times over," Arnold says. "She's had cancer; it's not minimal cancer. She had one of her kidneys removed while in state prison — at state expense. Her serious felonies are more than 20 years old — and she still remains incarcerated."

That's how you lose good laws. When you disproportionately apply them, someone will take it away from you. Either the public will take that powerful tool away, the legislature might do it — or the courts might do it.

Cubie is one of about 3,000 California prison inmates serving 25 years to life for nonviolent crimes.

But it's highly unlikely that Cubie — or the doughnut guy — would have been prosecuted with a third strike just 100 miles south, in Los Angeles County.

"Twenty-five to life is the same sentence we give to first-degree murderers," says Los Angeles County District Attorney Steve Cooley. "And to give that to someone who committed a petty theft or two-bit forgery just seemed disproportionate."

The three strikes law allows prosecutors to disregard some prior offenses. Cooley takes full advantage of that. He almost never charges a nonviolent offense as a third strike. Cooley says it's almost as if there were different laws in different counties.

"The three strikes law is probably not being even-handedly applied, because different prosecutors for different reasons — some ideological and otherwise — are coming up with their own policies, or, in some cases, they don't want to have a policy they can point to. We're doing it right here," he says.

Make no mistake, Cooley supports the three strikes law. He just thinks it needs to be changed — or it won't last.

"That's how you lose good laws. When you disproportionately apply them, someone will take it away from you," Cooley says. "Either the public will take that powerful tool away, the legislature might do it — or the courts might do it. And, as a matter of fact, the Supreme Court voted 5 to 4 to uphold our three strikes law. So four justices of the Supreme Court weren't real happy with how the three strikes law is being applied in California."

But the three strikes law is unlikely to be changed anytime soon. It has become such an icon in California's criminal justice system that Cooley was drummed out of the state district attorney's association for trying to alter it.

And this summer, when California lawmakers were negotiating a plan to reduce the population of California's woefully overcrowded prisons, the issue of amending the three strikes law never came up.