Accessibility links
'Lo' And Behold: A Communication Revolution The Internet began with a whimper, not a bang. And not everyone agrees on when that whimper occurred. But 40 years ago Thursday, the first communication over a computer network called ARPANET was sent — a message that said simply "lo."

A record of the first message ever sent over the ARPANET from an "IMP log" kept at the University of California, Los Angeles. Courtesy UCLA hide caption

The first in an occasional series

The Internet began with a whimper, not a bang. And not everyone agrees on when that whimper occurred.

But 40 years ago Thursday, something called the ARPANET came into existence, and since then, communication hasn't been the same. 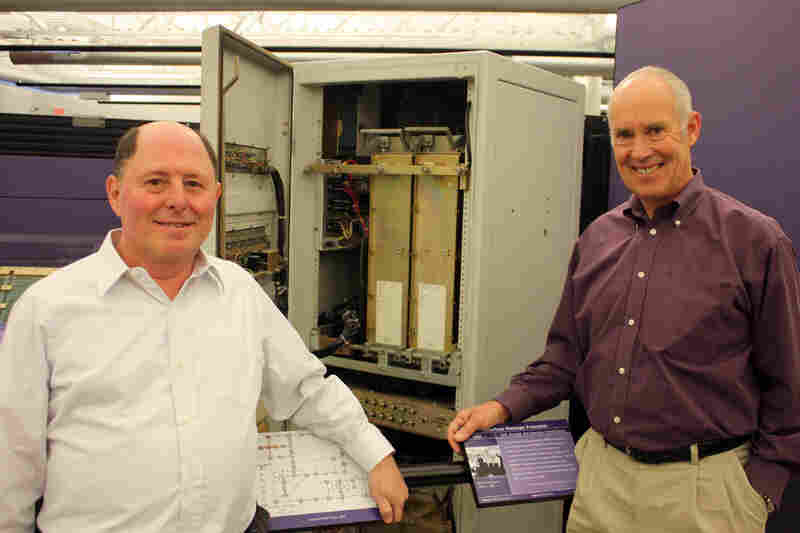 Charley Kline (left), working at UCLA, sent the first transmission over ARPANET to Bill Duvall at the Stanford Research Institute. Behind them is an IMP, or interface message processor, the kind of machine that made it possible to send the message. Guy Raz/NPR hide caption 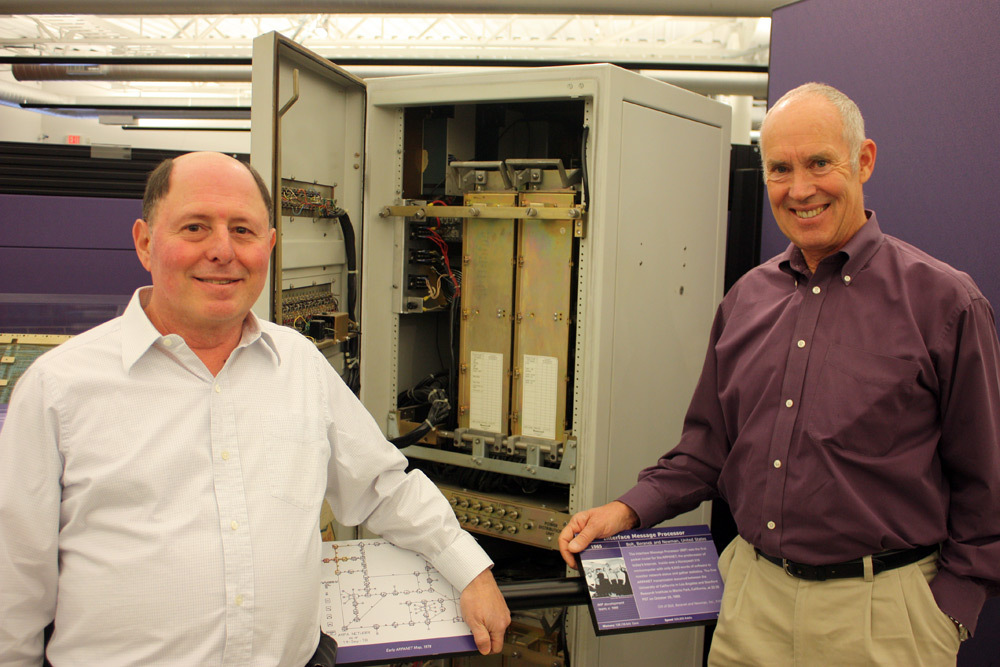 Charley Kline (left), working at UCLA, sent the first transmission over ARPANET to Bill Duvall at the Stanford Research Institute. Behind them is an IMP, or interface message processor, the kind of machine that made it possible to send the message.

Charley Kline's moment in history unfolded inside a large, empty computer lab at the University of California, Los Angeles, at 10:30 p.m. on Oct. 29, 1969.

"I was 21 and a programmer who liked to program all hours of the day and night," Kline says.

Those hours were spent with the SDS Sigma 7 — a computer the size of a one-bedroom apartment.

On the night of Oct. 29, Kline sent an electronic message from the Sigma 7 to another computer at the Stanford Research Institute in Menlo Park.

That transmission would literally transform the way we communicate today.

A series looking at the people who built it, the way it's changed us and what the future holds.

To tell the story of how it happened, you have to start with the context in which it happened.

A communication revolution was taking place — but it was happening over the telephone. Telephones were for communicating, while computers were built to process information — to do things like payroll and number-crunching.

The IBM 1401, a computer system about the size of a two-car garage, could process about as much information as your cell phone — your ratty old cell phone from the 1980s, that is.

On a recent afternoon at the Computer History Museum in Mountain View, Calif., a few old-timers got the IBM 1401 up and running. That computer is one of many in the museum's main exhibit hall — a space the size of four football fields.

But, says Bill Duvall, "It's fair to say that your BlackBerry has more computing power than all of the computers in this room combined."

Duvall was on the receiving end of Kline's first message. 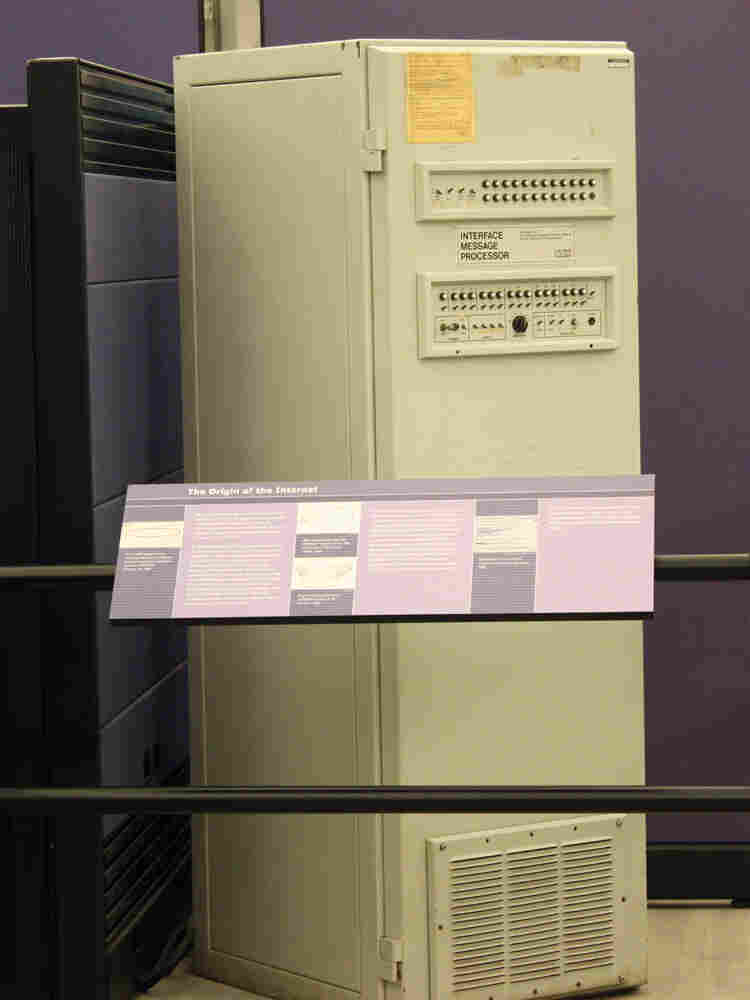 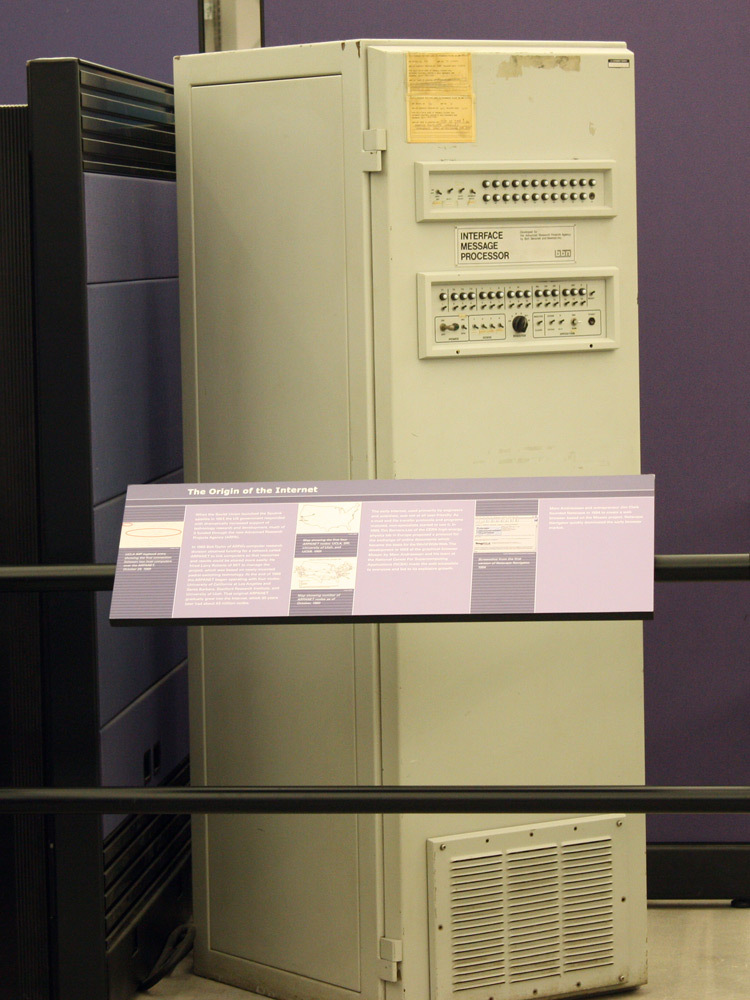 An IMP, or interface message processor, an early version of today's Internet router, on display at the Computer History Museum in Mountain View, Calif.

An Idea In Motion

Nearly four years before Duvall and Kline did the Internet equivalent of the moon landing, Bob Taylor was sitting in his office at the Pentagon, where he worked for the Advanced Research Projects Agency, or ARPA.

And he was frustrated.

Taylor had three computer terminals in his office. Each one connected to a different computer in a different part of the country.

"To get in touch with someone in Santa Monica through the computer, I'd sit in front of one terminal, but to do the same thing with someone in Massachusetts, I would have to get up and move over to another terminal," Taylor recalls. "You don't have to look at this very long to realize this is silly. This is stupid. So I decided, OK, I want to build a network that connects all of these."

So Taylor started to collect really smart people — people who could build that network, like Duvall, Len Kleinrock at UCLA and the young Kline.

Taylor also sent word to the biggest technology companies that they could bid on a contract to help build that network.

"IBM refused to bid, as did AT&T," Kline remembers. "They both said, 'Can't be done; it's useless.' They saw the future of computing as bigger and bigger mainframes."

So a smaller company, Bolt, Beranek and Newman, got the contract. It built a device called the IMP, the interface message processor. It was as big as two full-size gym lockers.

Kline explains how it worked: "I would type a character. It would go into my computer. My software would take it, wrap around it all the necessary software to send it to the IMP. The IMP would take it and say, 'Oh, this is supposed to go up to SRI.' "

Think about it like your home Internet router, only 100 times bigger.

A Message For The History Books

It took about a year for Bolt, Beranek and Newman to build several of these IMPs and get them into place at different locations in the country, including at UCLA and SRI.

"At some point, we were ready to test it," Kline says. "It wasn't like we had planned it."

So, late on that October night in 1969, Kline, sitting at the UCLA computer lab, placed a phone call to Duvall at Stanford.

"We didn't walk into a darkened room, turn on the lights, flip the switch and have it work," Duvall says. "This was something that we tried some number of times. ... We were hooked up with a telephone headset, and we were talking to each other."

Kline started to type the historic message — an online communication roughly equivalent to what the Neanderthal is to modern humans.

"We should have prepared a wonderful message," says Kleinrock, who headed UCLA's computer lab then. "Certainly Samuel Morse did, when he prepared 'What hath God wrought,' a beautiful Biblical quotation. Or Alexander Graham Bell: 'Come here, Watson. I need you.' Or Armstrong up in the moon — 'a giant leap for mankind.' These guys were smart. They understood public relations. They had quotes ready for history."

On Oct. 29, Kleinrock says, "All we wanted to do ... was to send a simple login capability from UCLA to SRI. We just wanted to log into the SRI machine from UCLA."

And so the first computer network communication was — well, it was supposed to be the word "login."

"The first thing I typed was an L," Kline says. Over the phone, Duvall told Kline he had gotten it. "I typed the O, and he got the O."

Then Kline typed the G. "And he had a bug and it crashed."

And that was it. The first-ever communication over a computer network was "lo." The ARPANET was born.

About an hour later, at 10:30, they got it to work — and successfully transmitted L-O-G-I-N. Kline scribbled some notes into a logbook and went home to bed.

Duvall also called it a night. On the way home, he stopped for a quick burger and a beer — to celebrate, right?

No, he says. He was hungry.

You can hear more about ARPANET's beginnings on Saturday's All Things Considered.